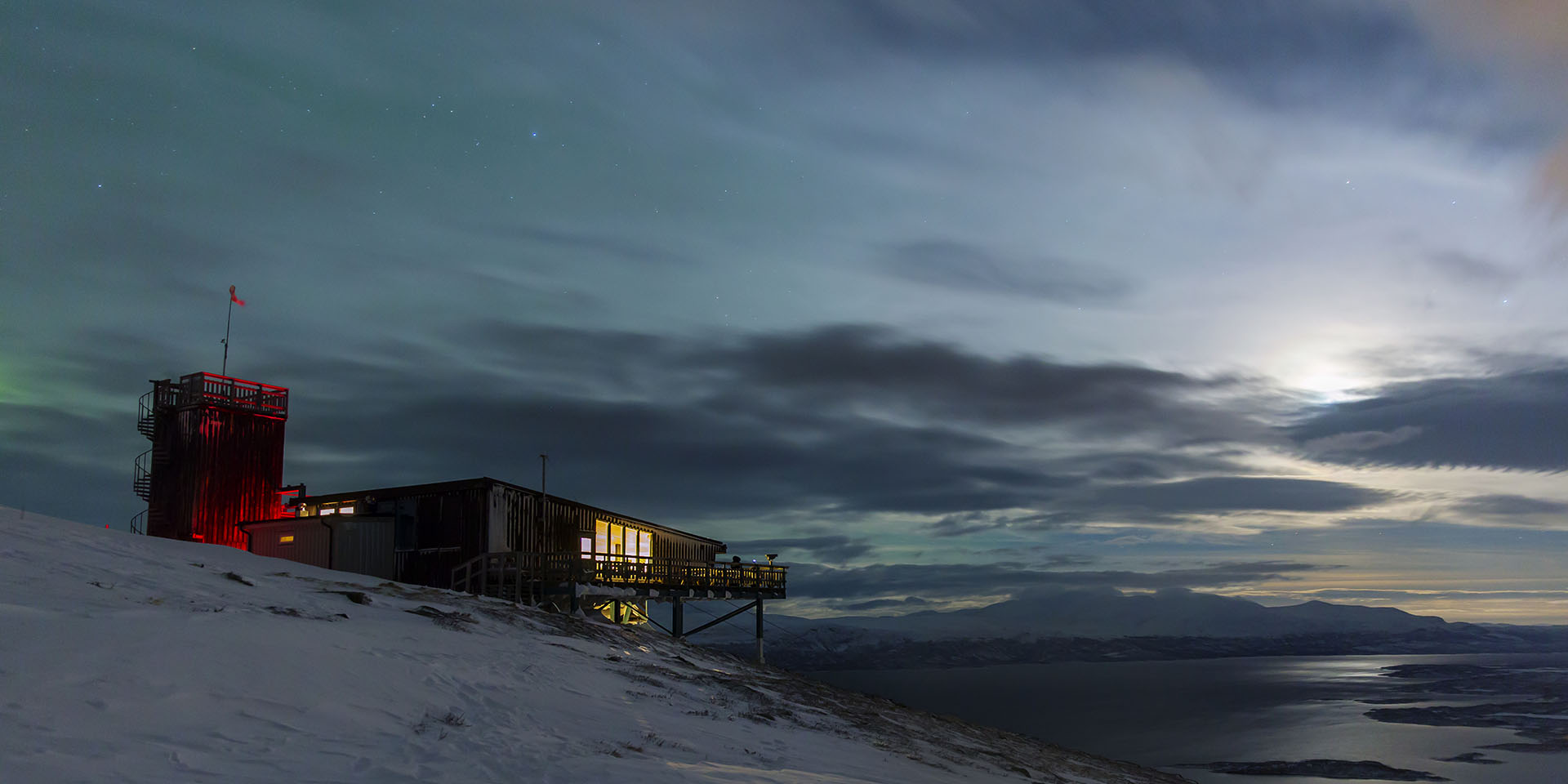 A night at the station

What happens when you combine a delicious dining experience with the world’s best location for the northern lights? Well, perhaps you can call it a perfect night at the station.

The place for northern nights

The northern lights shine over Abisko tonight. It’s not unusual. In a place like Abisko, right underneath the Northern Lights Oval, the northern lights are visible more often than not. Also – as luck would have it – Abisko is one of the places with the lowest precipitation in Sweden, which means fewer clouds and more blue sky. Quite simply, Abisko is the place for all northern lights hunters looking to improve their odds. You can tell. The village is full of life even if it’s cold and the sun just appears for a few hours in the middle of the day. It’s because of the northern lights the Swedish Tourist Association’s old mountain station is fully booked, today being no exception.
– Imagine, not long ago we used to lock the whole place down in October, gave it a pat and said: “See you in March”.
– These days our best season is during the months we used to close up, says Helena Runeberg.
– It’s crazy really, how the northern lights have changed this place. 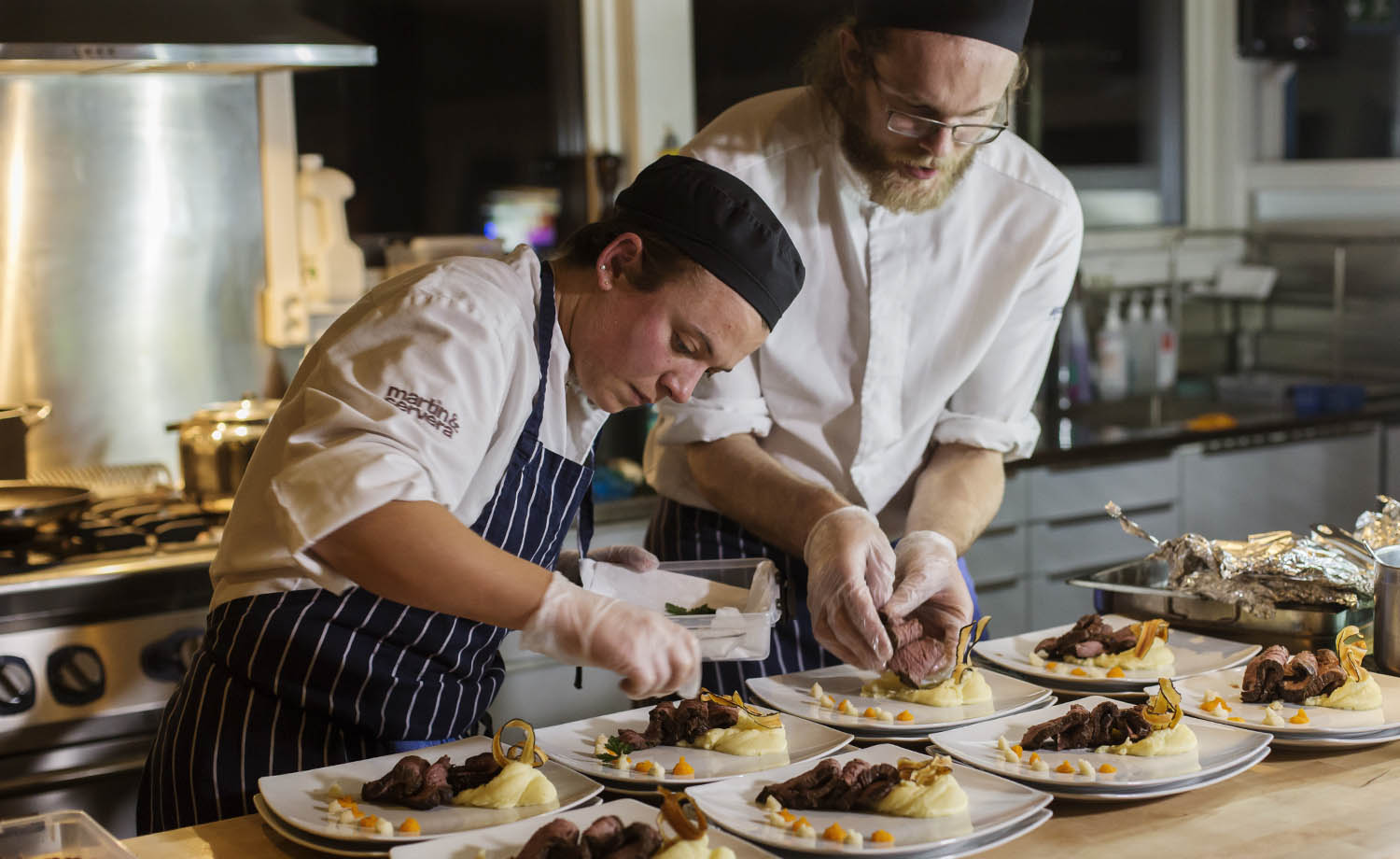 The kitchen at Aurora Skystation at full speed.

Later the same evening we walk from the mountain station in Abisko to the ski lift on Njullá. We get to borrow overall and warm shoes, and when we’re ready the journey up onto the mountain begins, by ski lift. It takes 20 minutes, and in the clear and cold evening, it’s nice not to move too fast. The moon shines bright like a lamp and the famous silhouette of Counjávággi lights up the east. As we get off at the top station, now called Aurora Sky Station, we can see faint northern lights in the northwest. A promise of what is yet to come.

We enter the station and are welcomed by the hostess, Anna Björnfot, with a glass of sparkling wine. The kitchen is going at full speed, chef Damien Schwery and his colleagues are busy; soon the first course of the evening will be presented on our plates. The menu looks promising, with low-temperature-cooked elk and a classic dessert in the Arctic part of Sweden: cloudberries, coffee cheese and cloudberry jam. Nothing in life can go wrong when flavours like these appear on the table. 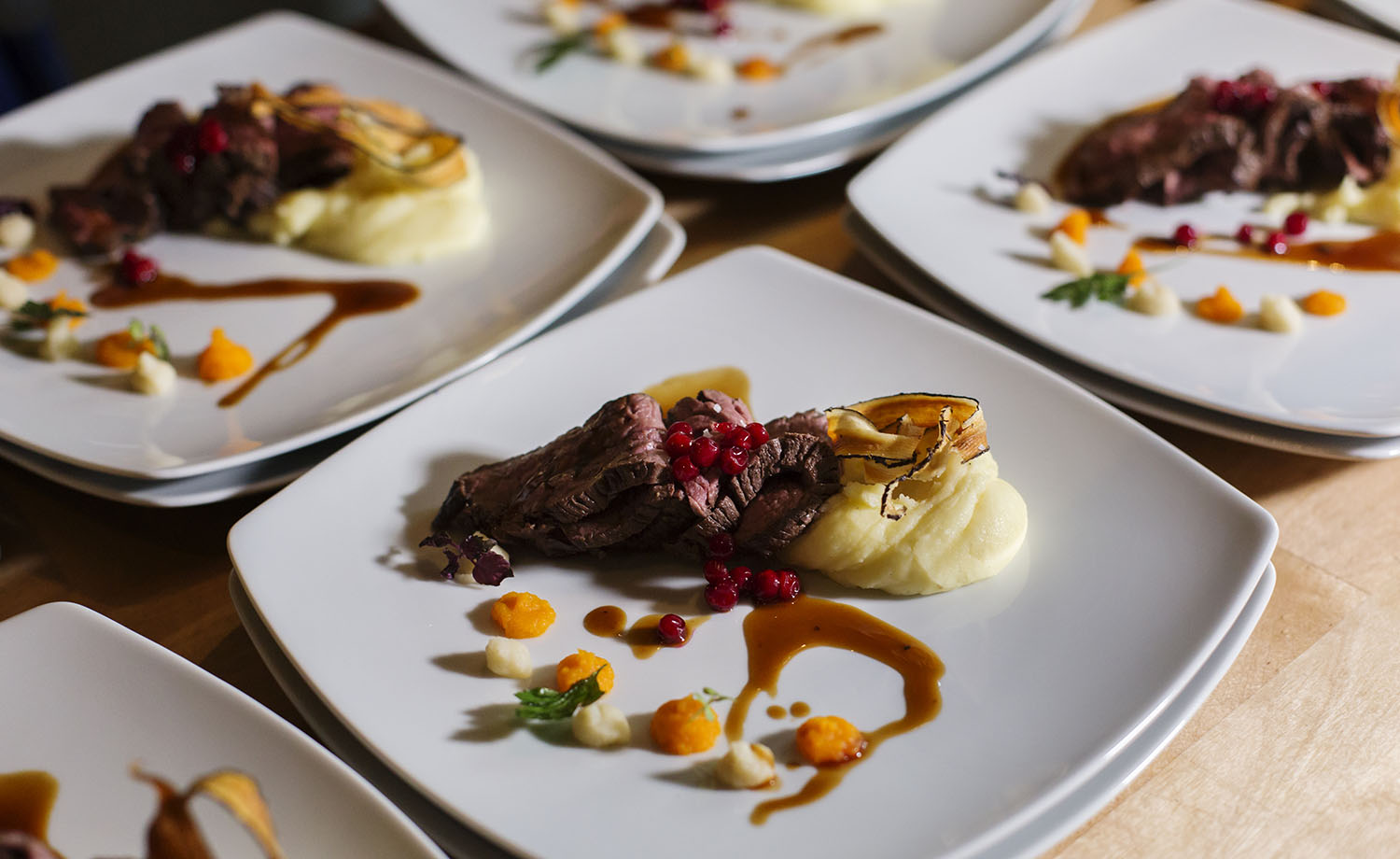 A taste of the arctic.

All of a sudden, when we’re eating our dessert, our guide Jon comes in and clears his throat.
– I don’t want to disturb you in the middle of eating, but the northern lights are growing. We’re going to get a nice show soon.

Many of us are glued to our chairs. One part of you wants to run outside immediately. The other just wants to stay put, to enjoy the dessert and a little glass of something. Other guests seem unaffected by doubts and speedily head towards the front door. They leave food and drink behind, who cares about cold coffee when the northern lights beckon.

Once outside an incredible spectacle is about to begin. All around the mountain we can hear cries of joy as we’re stood there, ringside seats to the Northern Lights: “Look at that!”, “Have you seen anything like this before?”, “Check left!”, “Amazing!” and “Oh my… so, so beautiful!”. And it’s as if the northern lights intend to show us more than just a quick peek tonight. It feels like hours, but it’s probably only one. It’s so intense, and it fills the entire sky. When it eventually calms down, we return inside. Sorting ourselves out with hot coffee, we just sit there and contemplate our luck. 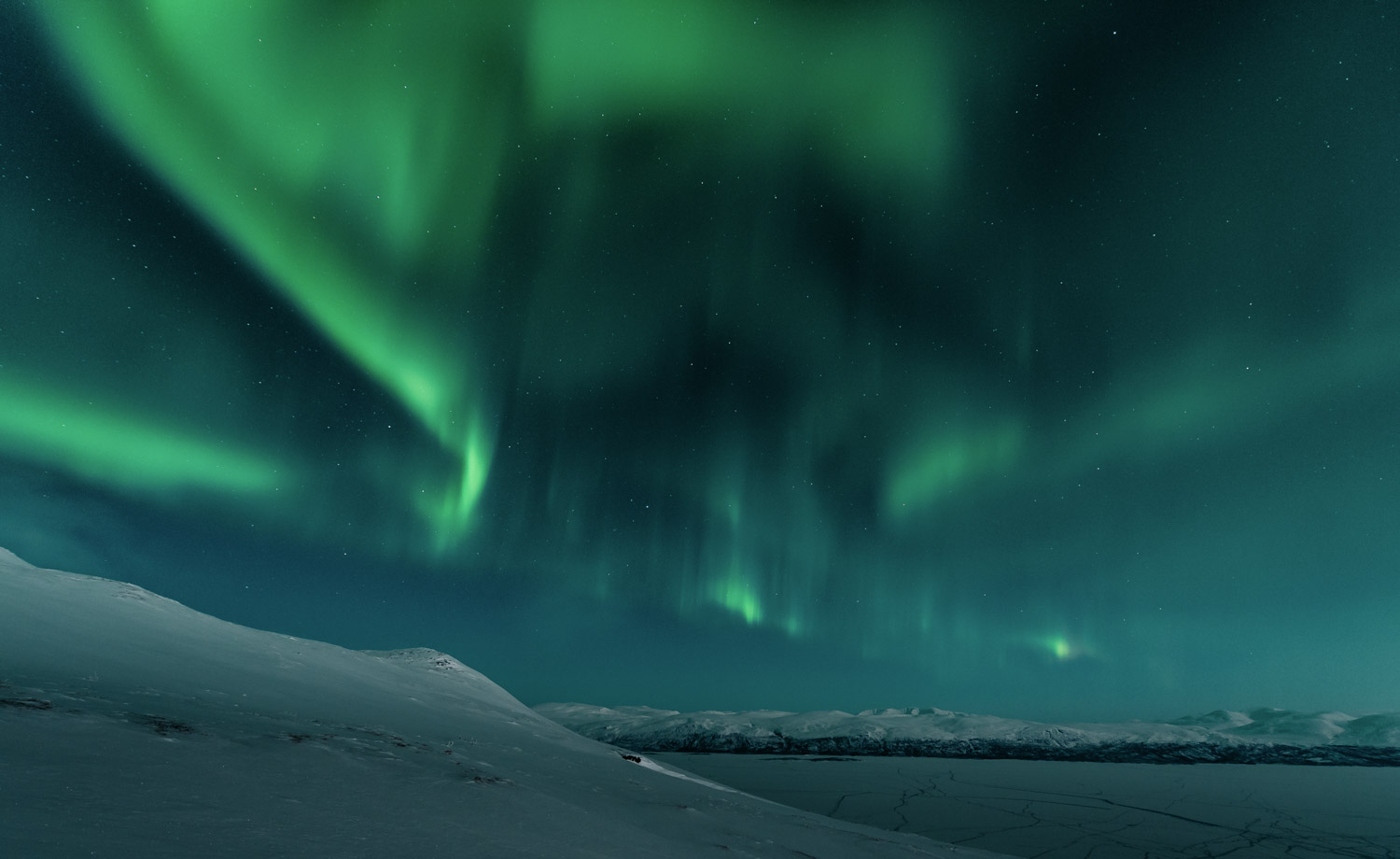 Abisko has been called the best place in the world for northern lights by different entities. It’s not just the Swedish Tourist Association in Abisko that benefits. Several companies have appeared now that the season continues all year round. Dog-sled companies and guide companies as well as accommodation-related ones of course. On a different evening, we have dinner at Abisko Mountain Lodge, more built around activities like heli-skiing, guiding and of course good food. The restaurant exhibits new drawings and plans on the wall. Mina Johansson Dahl tells us they hope to put the spade in the ground soon, to expand.
– It wouldn’t be possible if it weren’t for the northern-lights tourists. It’s as simple as that. 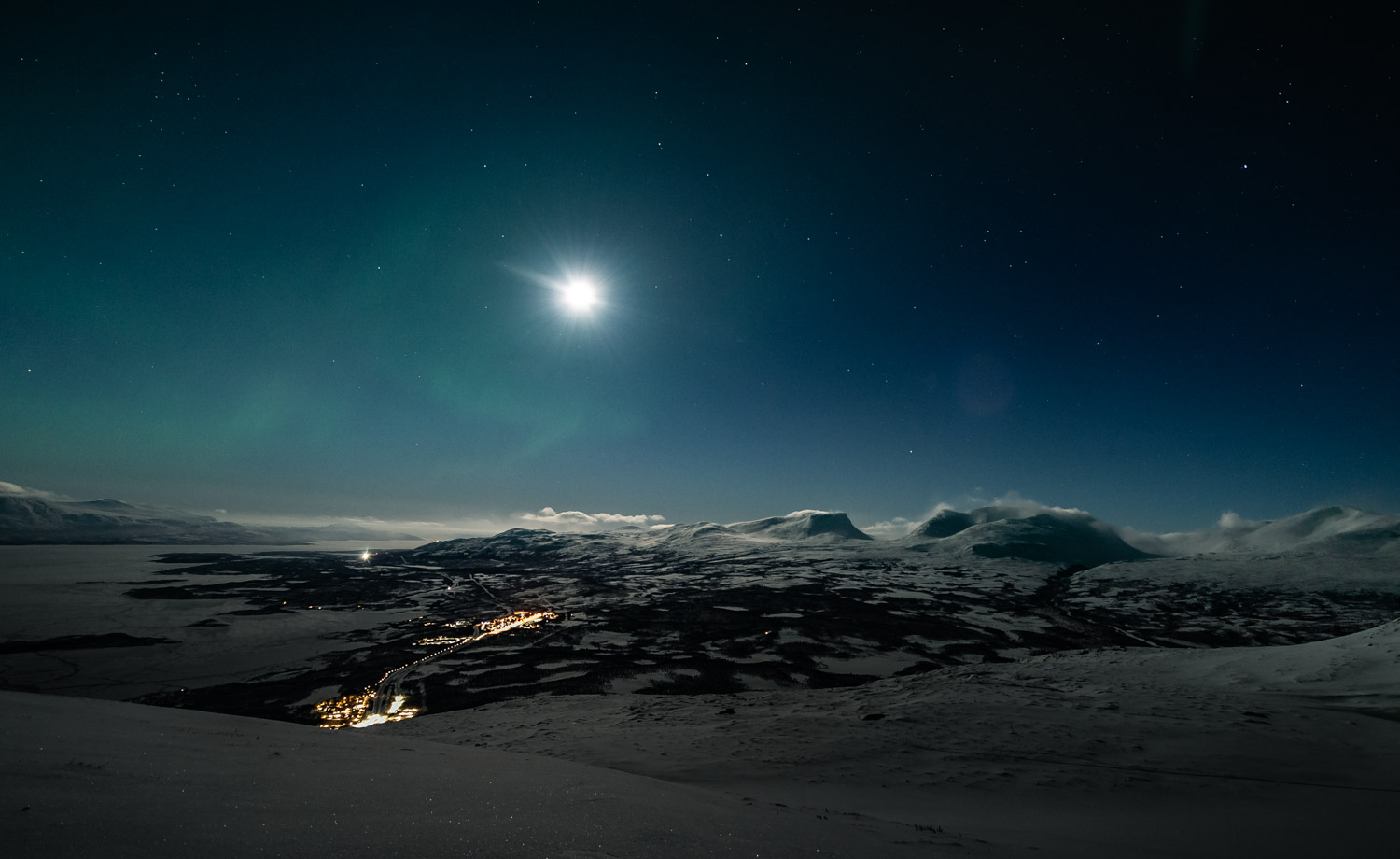 A photo safari that delivers

Peter Rosén used to work as a climate researcher at Abisko Research Station. But his interest in photography got bigger and bigger. These days he organises photo safaris for people from all over the world. One of the reasons guests come here, and that Peter works here is, of course, Abisko’s ability to deliver northern lights.
– We’ve run safaris since 2014 and never has a guest stayed three nights with us and not seen the northern lights.
– I’m not going to talk about other destinations, but what I can say is that we’ve had plenty of guests who’ve been staying elsewhere before they come here and have their dreams come true.
– Once you’re in Abisko it’s not really “a hunt for Aurora”. It’s more a question of finding some blue sky. It couldn’t be more perfect. This place is known for its blue hole, being the place with the lowest precipitation in Sweden, says Peter and smiles. 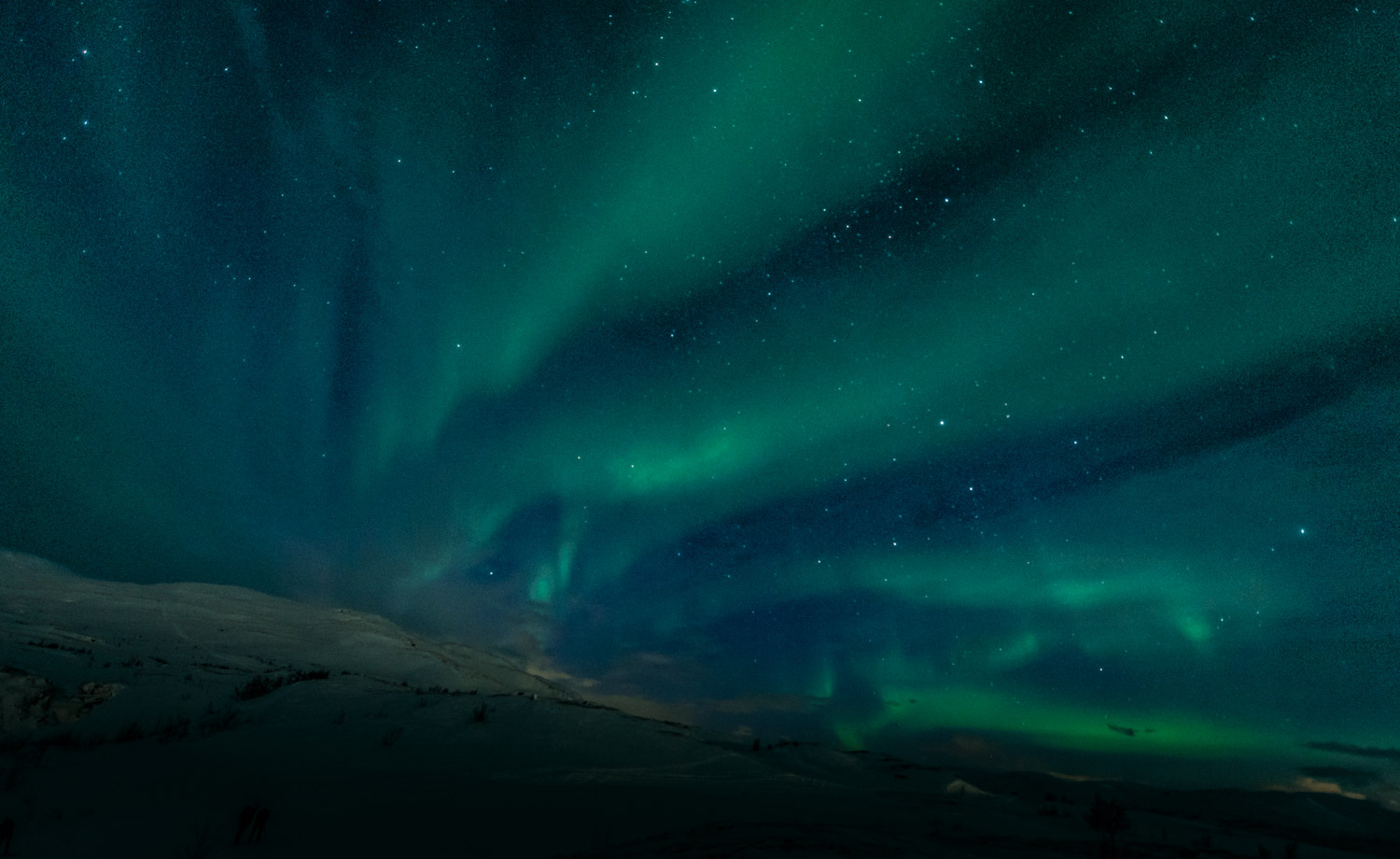 A matter of finding a clear sky. Photo: Ted Logart

Another photographer you might come across in Abisko is Sarah Skinner. She works for Lights over Lapland, one of the guide companies arranging day trips – read: evening trips – for photo-interested guests visiting Abisko. Sarah works as a nature photographer, travelling to Africa to try to capture the big animals, among other things. She also wanted to capture the northern lights. She went to other places first, before she found Lights over Lapland in Abisko.
– As a nature photographer, I really appreciate the opportunity to take photos of other things than the Northern Lights, such as elk and reindeer, and just nature. But of course, I understand that my guests want the northern lights on a picture. So that’s always our priority.
– And it’s just crazy. I’ve been taking photos of the northern lights for five years now, as a profession, and I still don’t get tired of being outside at night. 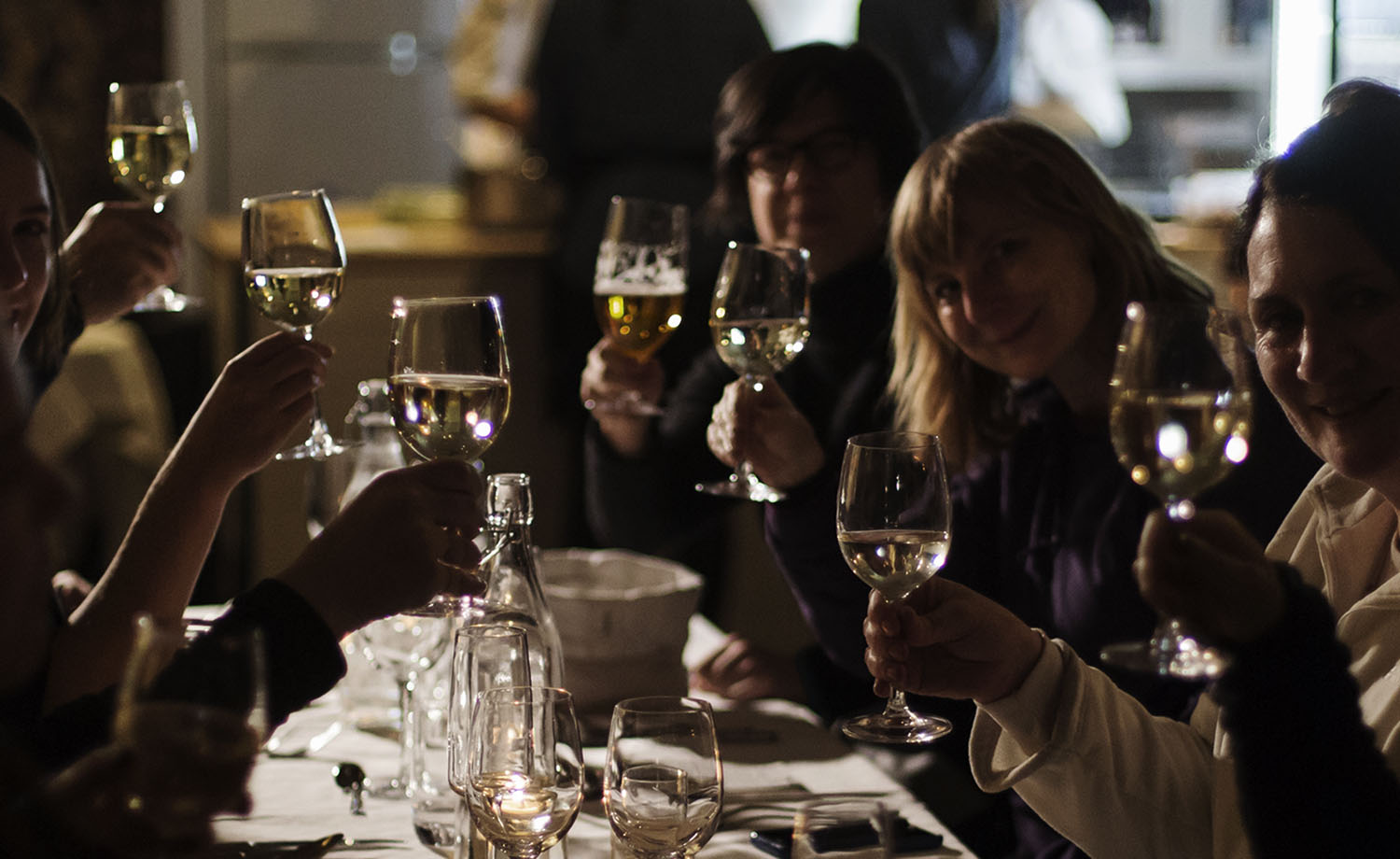 A perfect ending to a night at the station.

Aurora Sky Station in Abisko National Park is said to be one of the places on Earth to see the northern lights. Go to auroraskystation.com to find out more and don’t forget to check out their live camera!

We drink our coffee and take it easy. We see how some guests descend from Aurora Sky Station even if there are several hours left until the last lift run of the evening. Thinking we should give it another go we step outside again just after eleven at night. There’s a weak green line above the station that starts to grow, and before we know it, the show is just as spectacular as it was a couple of hours ago. Or actually, you can’t really compare it. No northern-lights display is the same as the other. But this is just as intense and awesome as the previous one, featuring all the colours of the northern lights. Green, blue, violet and red dance across the sky.

Yes, old Galileo Galilei who gave the Northern Lights their Latin name. He would have had a field day up here on the mountain. And who wouldn’t, on a night like this?