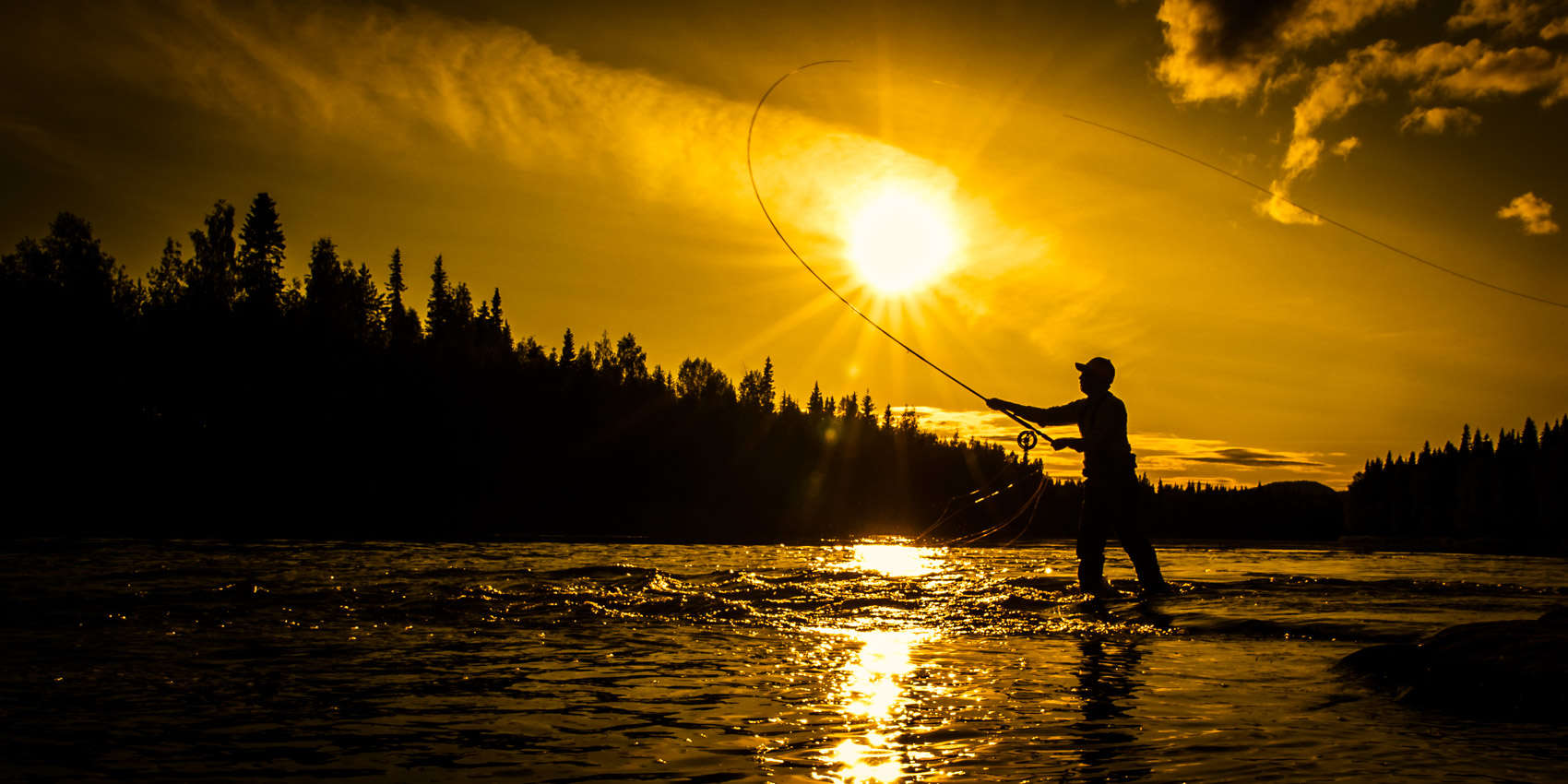 A tanked-up car, robust rod holders and a few intensely driven salmon fishers as company is an excellent start if you’re going to do some severe salmontrippin’ in Swedish Lapland. This is the story of three high-pitched days in four wild salmon rivers in what sometimes is referred to as Europe’s last wilderness.

– One hundred seventeen, one hundred twenty-two, one hundred twenty-nine…
Ronny Landin and Erling Holmström are scrolling through the last fishes registered by the camera in the fish-path in the Kalix River during the recent days.
– Shit, I comment without even saying hello. That’s some big fishes.

Ronny hums as a response without taking his eyes off the screen. Erling, who is in charge of the fish-path project, says nothing. Minutes pass. The screen spellbinds us. One after the other large salmon is scrolled by.
– The largest one, I say, and clear my throat. How big? 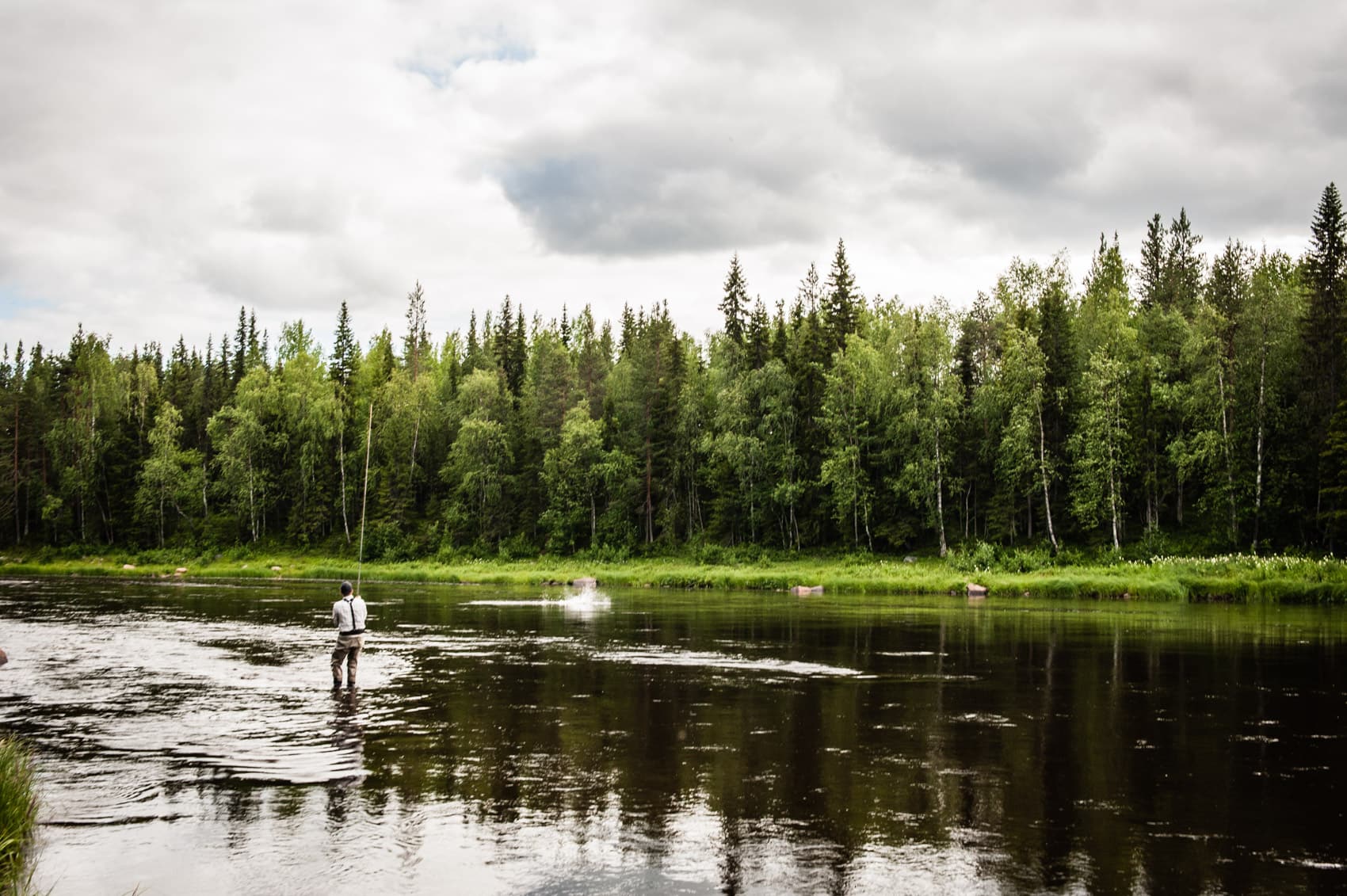 Erling doesn’t respond, but I can tell he’s looking for something.
– There, he finally says. 137 centimetres. Largest so far. But it’s only July and the salmon is late this year. Surely someone bigger is going to come along before the ice sets.*

He clicks on the 137 fellows, and a short film sequence with a gigantic salmon appears on the screen.

– And it measures correctly, I comment with scepticism in my voice.
– What we’ve reckoned, Ronny responds, is that it can be one or a few centimetres on the small side on really big fishes.
– 137 plus a few centimetres then, I say and let my imagination get the better of me. 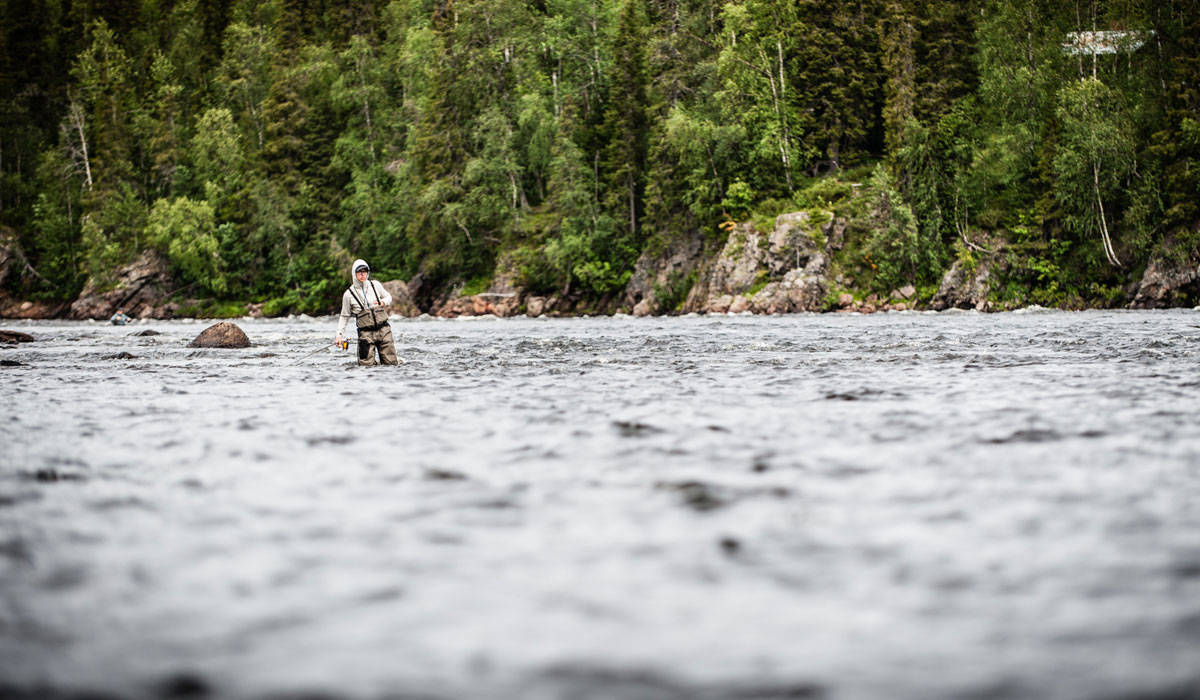 Torne River is a majestic salmon river in with approx. 50,000 salmon running each year.

Beauty and the beast

The plan is to fish in three different rivers in the same amount of days. Kalix, Torne and Lainio River. If it’s a clever idea? Probably not. We’re going to be spending a lot of time in the car. At least 300 km one-way. And as you know, you rarely get a bite sitting in a car.

– What do you think about going to Ängesån first? Says Ronny.
Ängesån (Änge stream) isn’t part of our plans, but you can tell that Ronny wants to give it a go.
– Ok, but then we have a total of four salmon rivers in three days, I say laughing.

Ängesån is a tributary and joins Kalix River in Överkalix. It really isn’t part of our plans. 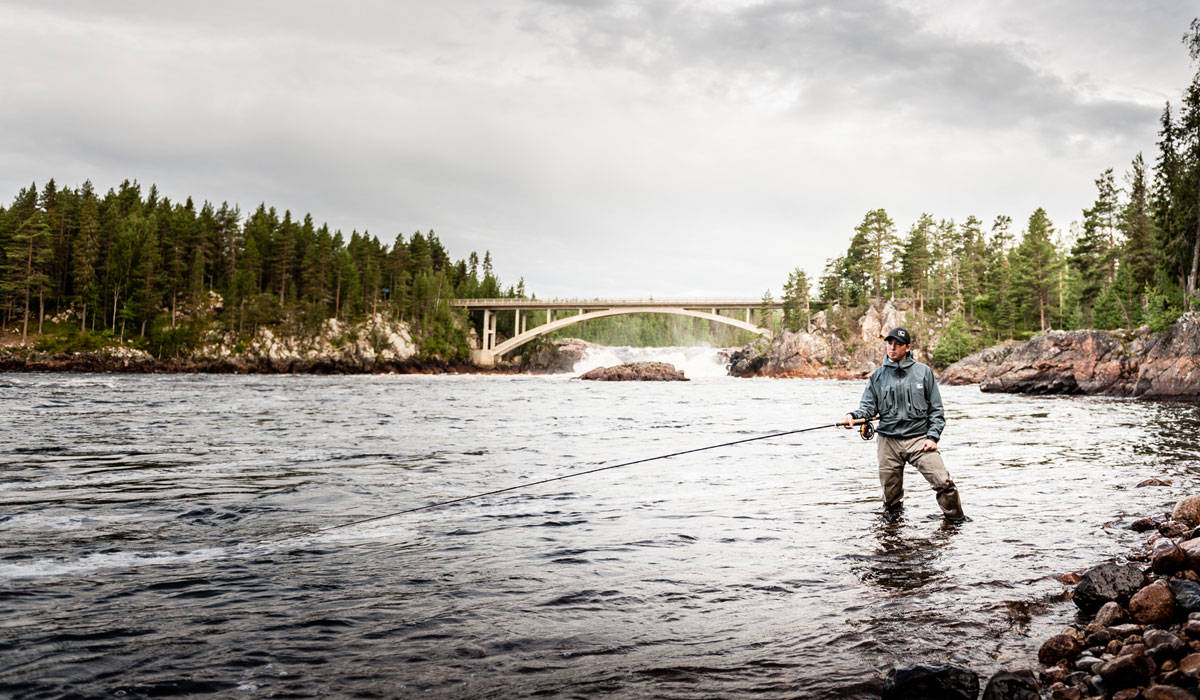 Ronny fishes in Jockfall, by some considered the best salmon pool in Europe. 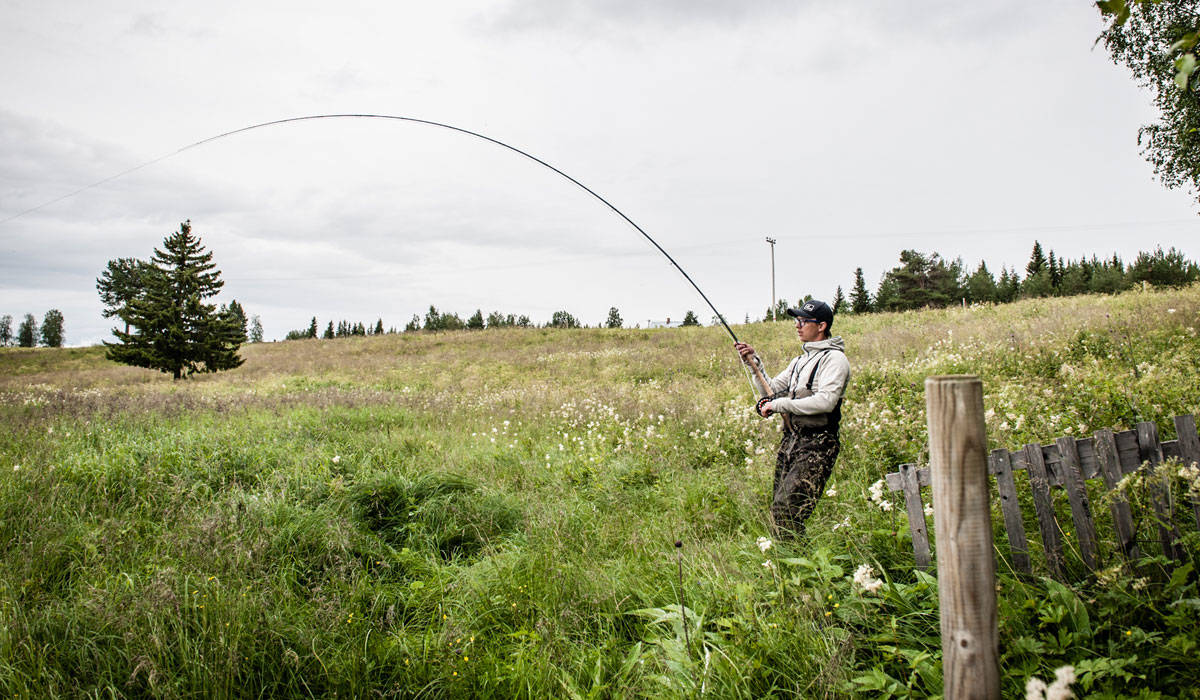 Lars Munk is into the fight of his life.

About ten years ago, Ängesån had excellent salmon fishing, perfect for fly fishing. But heavy fishing and lack of proper regulations resulted in a radically weaker salmon stock. Today the salmon fishing here is only a shadow of what it once was. But it is improving.

– But the river in amazingly beautiful, says Ronny and tells us that he, even though the fishing isn’t great, sometimes instead fishes in Ängesån than Kalix River.
We pay tribute to the forest roads of Swedish Lapland. The road surface is generously dusty. Sometimes we turn right, sometimes left. 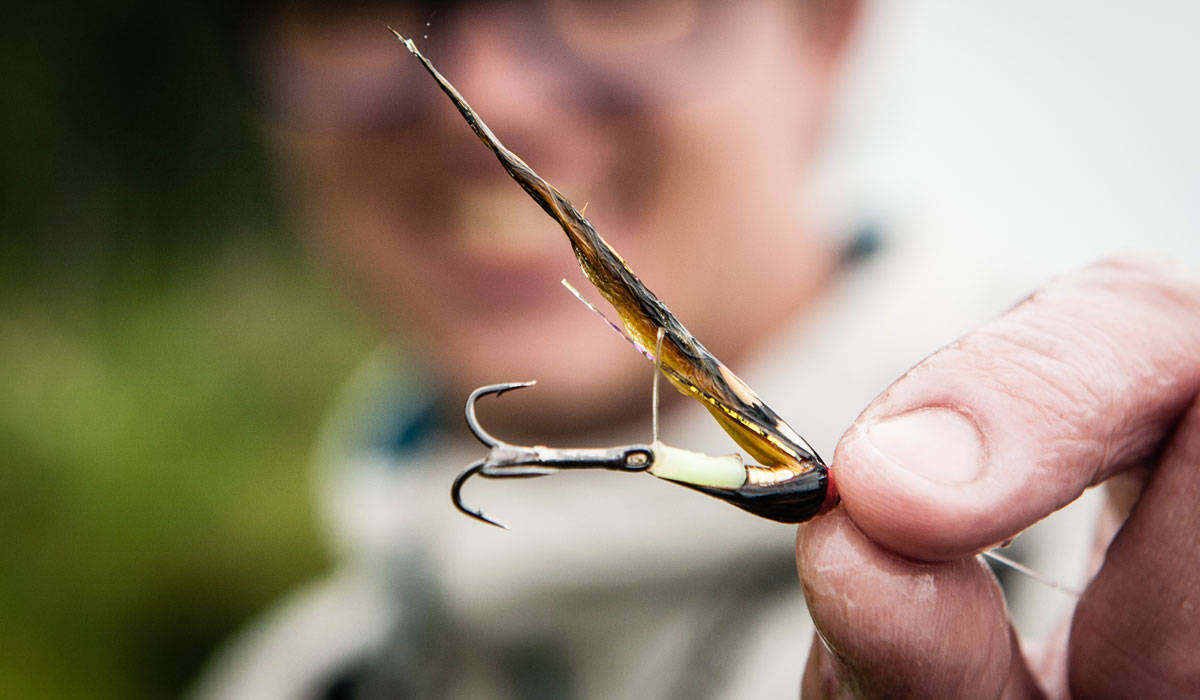 Flies don’t have to be big – a small Willie Gunn tied on a plastic tube.

We arrive at a fantastic pool. It’s not difficult to comprehend that Ängesån would be something out of the ordinary if it were holding more salmon. The sun is quite low. I try to find a right angle to shoot some nice images of Ronny while he swings his rod over and over again with the fly landing somewhat 40 meters away.

Through the lens, I suddenly detect how he raises his rod slowly, and the next second the surface explodes. A rare salmon in Ängesån have been utterly pissed off by Ronnnys fly. I press down the shutter release on my camera. Unfortunately, the fight doesn’t last for long. His leader breaks.

– What the heck, Ronny comments when he inspects the nylon. I just checked it.
– There’s that thing with big fish, I say, you lose some.
– The leader wasn’t even damaged.

Absentmindedly he lets his fingers slide back and forth over the broken nylon line. 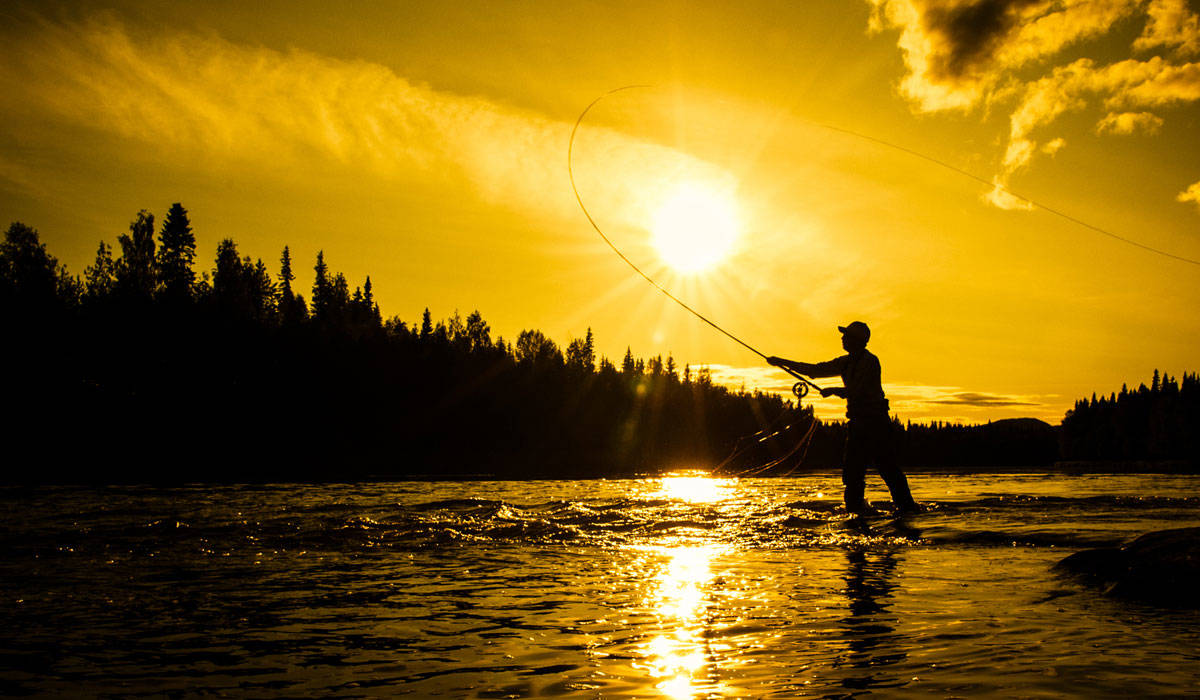 The day after the trip to Ängesån we make a couple of casts in the Kalix River, below the mighty waterfall: Jockfall. It’s almost a ten-meter drop. It’s not surprising that Jockfall is a popular fishing spot. In the late 90’s, a lot of independent authorities in the world of salmon fishing claimed that the pool below Jockfall was one of Europe’s best salmon pools – if not the best.

– If you look to fish-contact, it’s probably still a top contender in Scandinavia. But a lot of the fishes break loose. Especially the big ones. 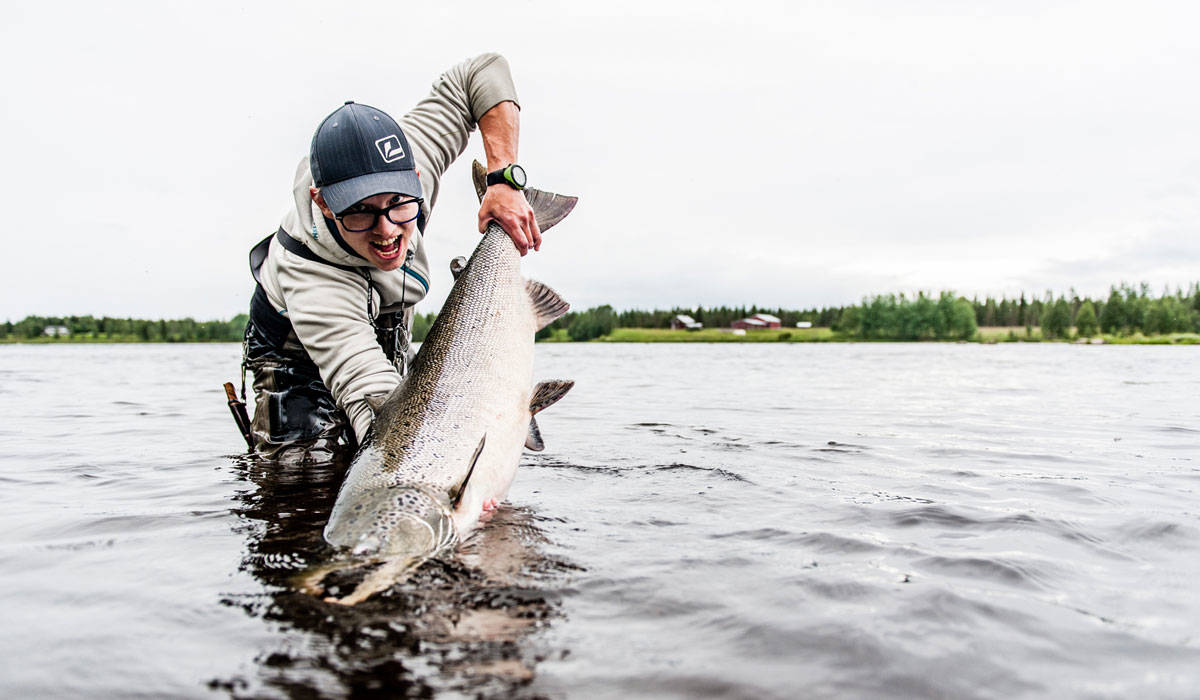 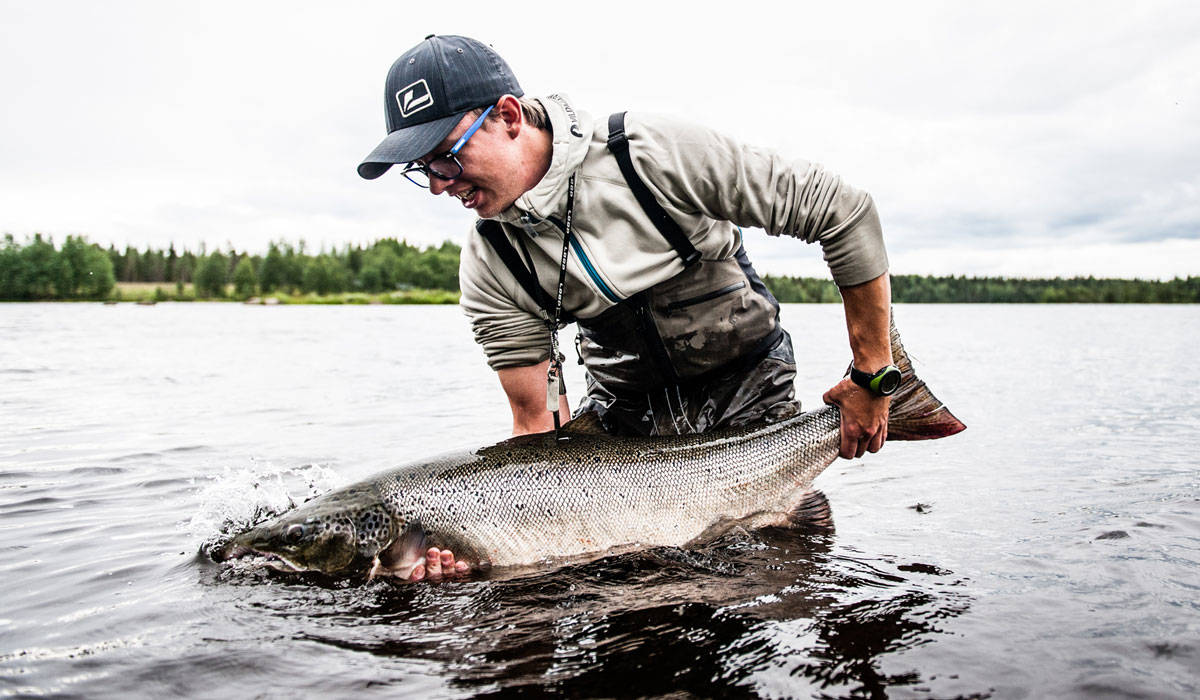 Catch and release - there’s no better feeling than returning the salmon of your dreams to the river.

Before we begin our drive towards the north, Ronny has time to guide me to a 86 centimetres shiny salmon. Just like that. It’s all rather undramatic, and it’s my first salmon in these waters in somewhat ten years.

My salmon is making us late. We’ve made an appointment with Ronny’s salmon brother Lars Munk in Kengis Bruk, close to Torne River. Except for fishing salmon, Lars guides keen fishers in Swedish Lapland, has a leasehold on almost 10 km of Laino River and administer the fishing in Kengis. Besides that, he’s a certified instructor (EFFA/FFF) and has, as Ronny puts it, a hell of a swing in his cast.

– The Torne River is good this year, Ronny says encouragingly. Almost as good as last year.

The base of this knowledge is a fish counter in Kattilakoski. In 2014 and 2017 the official salmon migration added up to almost 100 000 fishes, and this year has continuously shown good numbers.

When we get to Kengis, Lars is already set up. He’s made a fire and wants us to join him for some lunch. But I don’t want to eat. I’d rather fish. 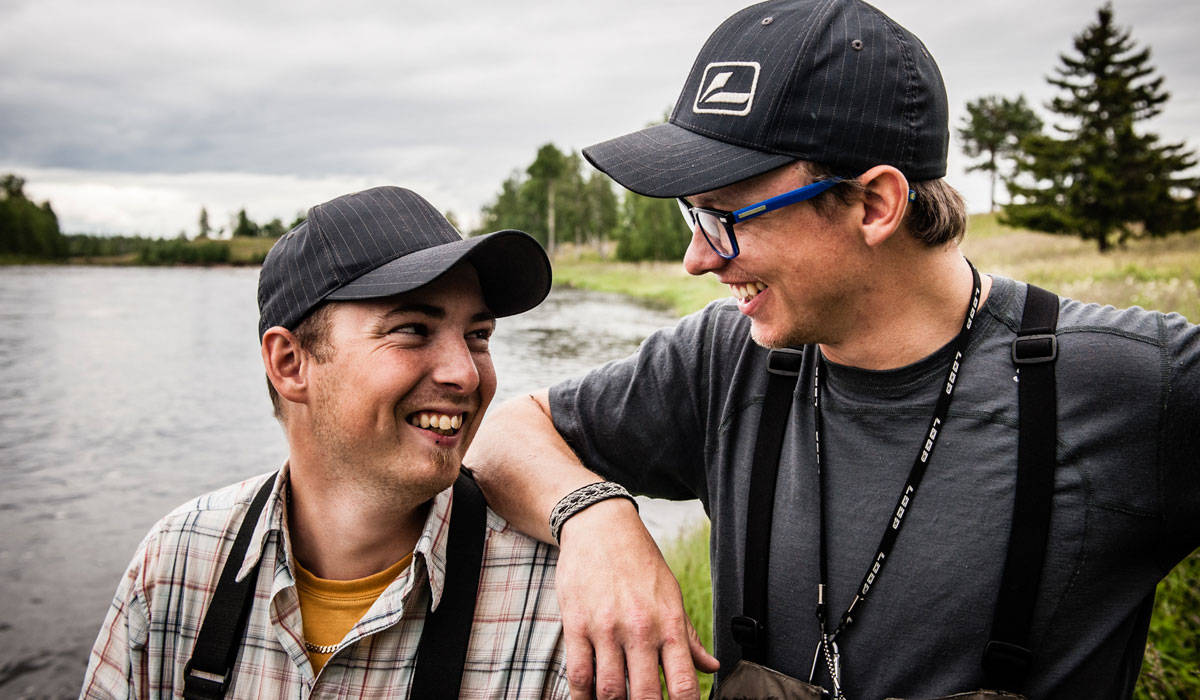 I’m at the top of pool in upper Kengis. The Torne River is wide. It even makes Kalix river look small and trivial. Fortunately, there is an island less than 100 meters out which cuts off the large stream. The seconds before Ronny squeals and I realise that something is about to happen. I can see how Lars is moving back towards the meadow with his rod high. Approximately seventy meters out in the river there is a salmon up in the air. Despite the distance, it looks big. Enormous.

I throw my rod in the bushes and start running. Lars is putting intense pressure on the fish. A little too harsh in my book and I tell him to take it gently, but he hisses at me that it’s him doing the work. And he sure knows what he’s doing. The fight doesn’t last for long. At least not as long as it would have if I were doing the job. Ronny steps into the water. He quickly grabs the fish just above the tail fin. The fishing phantom from Överkalix looks small and gaunt in comparison to the large fish. But he successfully manages to get the salmon up on the small grass edge. The fish flinches, and Ronny flies away like a mitten.

– Don’t let it go! Lars yells to Ronny while throwing himself on top of the fish and with joint forces, they manage to hold it down. The salmon is big. Really big. Well, probably the largest well-trimmed salmon I’ve seen in the wild.
– Heck, what a fish, I say.
– Yeah, heck, the salmon brothers say with one voice. 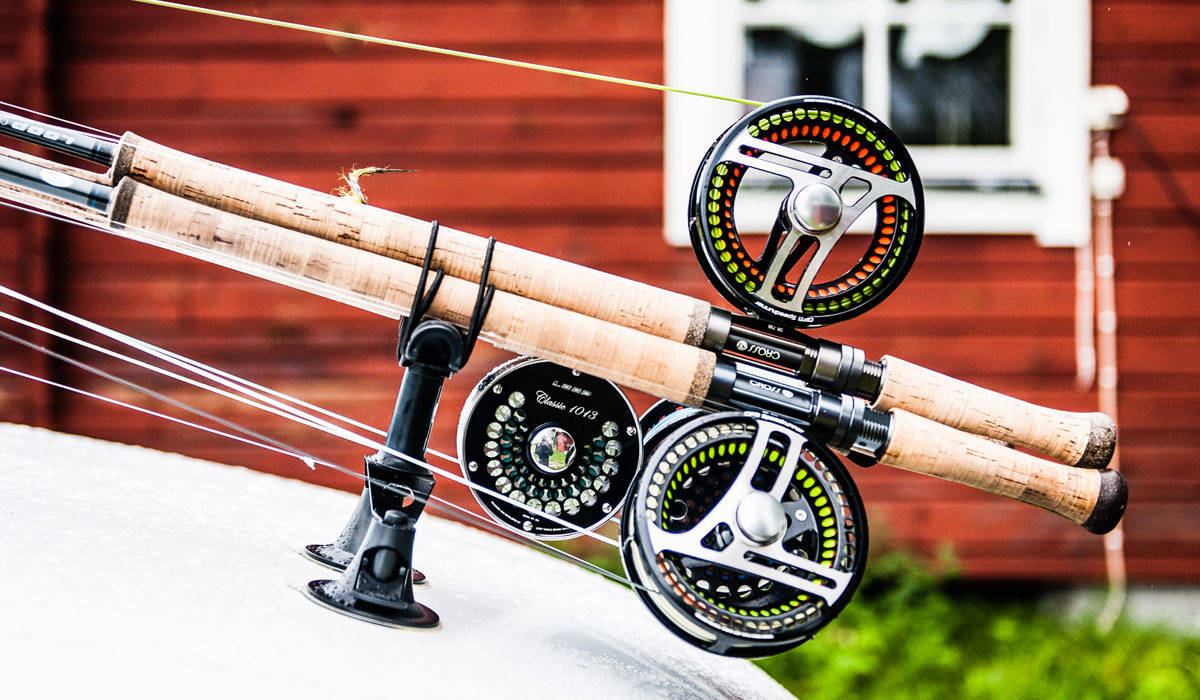 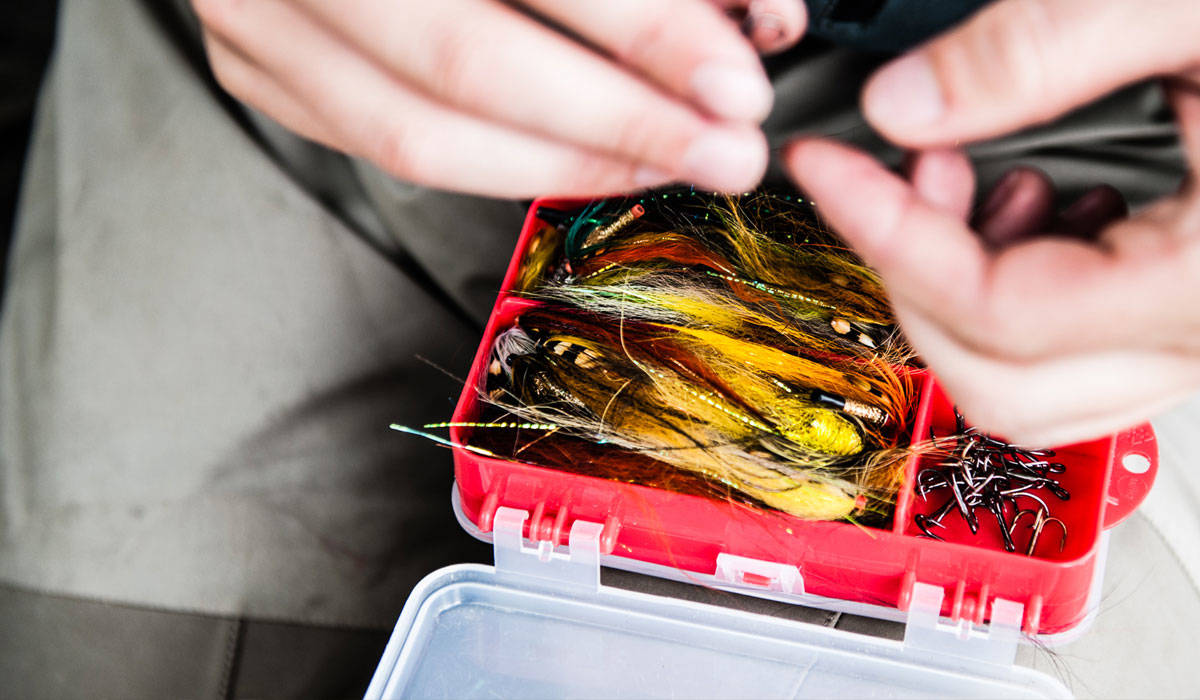 Sparsely dressed tube flies are often the weapon of choice in Swedish Lapland.

We take pictures and measure. I’m beaten. And still, I just watched the spectacle through my camera lens. The fish measures 117 centimetres. It is, as Lars puts it, semi-shiny and in mint condition. A Swedish Lapland giant, as from right out of one of those unbelievable fishing stories. Caught on a floating line with four centimetres short Willie Gunn tube.

After we put it back, the euphoria hits the roof. We hug. Backslaps for everyone. Someone sends text messages, and someone else calls friends and family. Someone opens up their inner doors and lets out their deepest emotions by screaming out the joy of catching the fish of one’s dreams.
– Check this out, Lars says displaying his phone.
It’s a message from his mother in law responding to the image he sent. DAMMIT WHAT A SALMON, she writes. In capital letters. 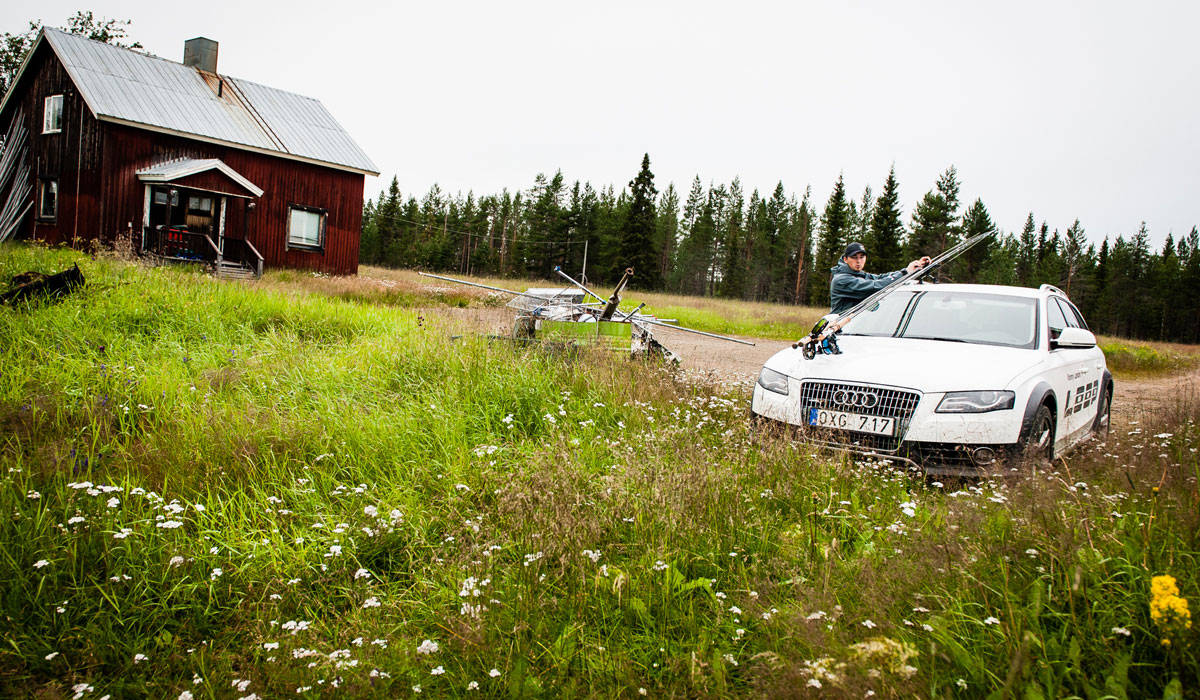 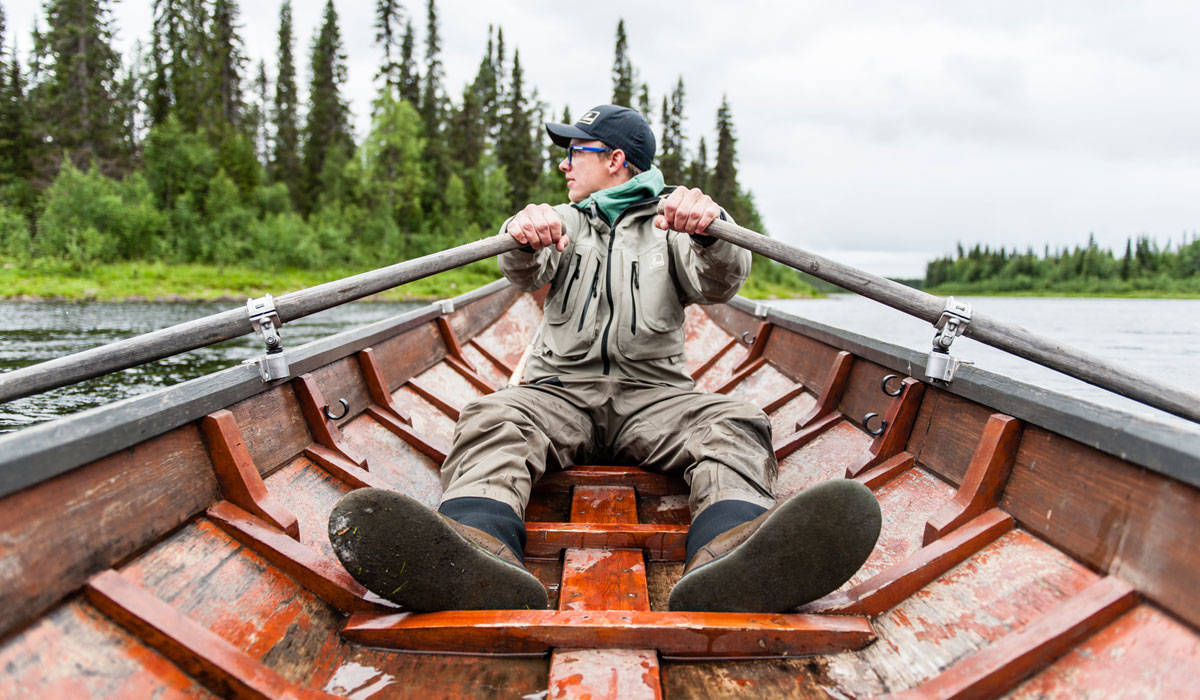 Boat transfer across river Lainio - if you have access to a boat you can maximize your chances by trying same casts from the opposite bank as well.

Lars is beaming like the midnight sun when I open my eyes the morning after. We’ve slept like kings at Pine Tree Lodge in Kangos, barely four kilometres from salmon river number four.
– We’re leaving for Onka. He says handing me a cup of morning coffee.

Onka is a classical fishing site that any salmon fisher in Swedish Lapland has a special relationship with. Lars has a small tent camp in Onka. We are being spoilt. We eat canned food with vegetables and drink proper boiled coffee, finishing the meal with dried reindeer meat. And maybe that’s why we don’t deserve any Lainio-salmon. Lars’s friend, on the other hand, Kricka, calls us regularly and reports. He calls in three fishes before we’re done for the day, and we are back in reality. The salmon fishing reality characterised by driving, empty throws, can-eating but also great company and the possibility to share the excitement with others, even though just through a typically short text message. 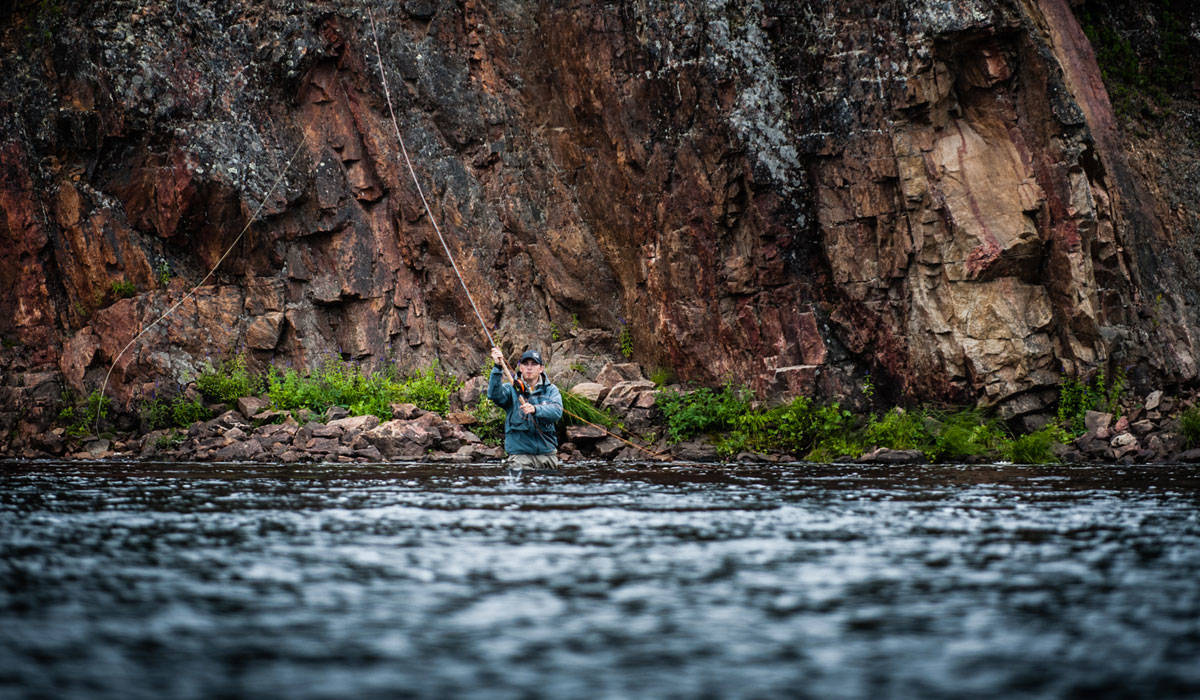 Onka is a classic holding pool with dramatic steep cliffs in river Lainio.

Want to fish for baltic salmon in Swedish Lapland? Fly fish Scandinavia is a good place to start.

– You know, it’s not that easy to get charged up again after yesterday, Lars says.
– As a salmon fisher you aren’t supposed to surpass expectations, I say. Not as much as yesterday.
– It’s like shooting for the treetops and unwillingly reaching the stars, says Ronny.

We agree that it can’t be repeated. We can’t lose focus just because ONE giant fish happens to be caught.
– One can’t be content, Ronny says, and I agree.
– Next summer – let’s do five salmon rivers in four days, Lars says, and at least one salmon in each river.

*Btw, Erling was also proven right in regards to the large fishes, August the 3rd an enormous salmon of 151 centimetres passed Jockfall.