If a fish, or a catch, is to be a story, the fish has to be out of the ordinary, preferably bordering on dangerous. And if the story is to become a classic, the fish should be as big as a whale or the fisher should at least be a character like Captain Ahab.

But that doesn’t happen very often. Most fish are ridiculously small, hardly worth mentioning. Honestly, who wants to hear the story about when you caught a couple of char that was big enough to fill a sardine tin? That’s why all anglers are born honest but soon get over it. And that’s why you should take fishing stories for what they are. Even though many are worth telling and true besides. A while ago, I went to a sixtieth birthday party. The 60-year-old’s neighbour was also there, with his arm bandaged up to the biceps. He went around happily, greeting other guests with his left hand.

"It weighed 14.6 kilos. Well worth both a visit to the doctor and a course of penicillin."

Since I’m rather reserved, I didn’t ask about the nature of the injury. I surmised that the old chap probably sustained a burn while playing with fire. Instead, when I made some discrete inquiries, I learned that the neighbour had been fishing out on the ice near his home. The record-sized pike had taken the bait and, after a struggle, the angler had managed to pull the fish’s head up through the hole. The hole was too small, and the pike was too fat. The line broke, and the neighbour watched as the pike began to sink back through the ice. When the pike suddenly gaped, the old fellow thrust his right hand into its mouth, whereupon the fish did what it was programmed to do: it struck. The older man’s hand was now in the grasp of a million slimy teeth.

Since the pike’s reflexes are such that it keeps a firm hold on its prey, it locked its grip and was dragged from the hole. It weighed 14.6 kilos. Well worth both a visit to the doctor and a course of penicillin. As Sergei Timofeevich Aksakov wrote in his classic “Notes on Fishing” as early as 1847, “The pike’s greed knows no limits”.

If a fish, or a catch, is to be a story, the fish has to be out of the ordinary, preferably bordering on dangerous.

A season for everything

Fishing; what is it, really? I mean, why do we do it? And who does it? How is it that we can spend so much time trying to outwit a creature whose brain is the size of a peanut? How can a leisure pastime claim so many great sacrifices, such that some would willingly leave the house and home, lose their driver’s license, have their arm half-eaten and even swear never to drink again? What is it that makes fishing irresistible, like a force of nature, a revelation, salvation? Although I’ve been doing this for more than 40 years, I really can’t answer that question.

Perhaps it really is as Thoreau wrote: “Many men go fishing all of their lives without knowing that it is not fish they are after”. That is my only consolation as I once again slip away from home before anyone else is awake. It is late April, and I head for the sea. I don’t think I’ll catch anything, but at least I’m out.

“Many men go fishing all of their lives without knowing that it is not fish they are after.”

There is a season for everything. A whitewater paddler, I know once said, “Water is just melted snow.” Ergo, when winter turns to summer, the white powder is transformed. Of course, he was right. Just change perspectives, and you can have fun all your life. The great empty space is the time between your last cast in the autumn and your first cast in the spring.
The longest silence.

Everyone has their own way of getting through it. Some tie flies, others travel, some hit the bottle. Some do all three at the same time. Personally, I sink into some kind of mental hibernation. But when spring comes, I cast for pike – just because.

Why we do it

Descartes, the father of dualism, wrote: “Cogito, ergo sum”. Instead, I say: “Piscato, ergo sum”. That’s how it is, quite simply. “I fish, therefore I am”. And, if I were to devote myself to thought, or the process of thinking (cogitatio), you can bet that it would have to do with my next catch.

I am often asked the question: “When is the best time to fish?” The most straightforward reply is: “All the time”. The old T-shirt print “A bad day’s fishing is always better than a good day’s work” rings true. Eric Clapton stayed relatively sober when he went fishing. Apparently, he chose sobriety when, in a stupor, he fell and broke one of his rods in half. A couple of friends, for whom Eric had great admiration, looked at him with such pity that he decided it was time for rehab.

Bill Schaadt, a pioneer of US west coast steelhead fishing, was on his way up the Russian River early one morning. Rounding a curve, he lost control of his vehicle, skidded off the road and rolled far into the woods. Bill climbed out of the wreck through a broken window, managed to salvage a rod that had miraculously survived the crash and went fishing. It wasn’t until that evening when it was too dark to continue fishing that he summoned a tow truck.

J.D. (this is a fictitious name, but the story is, in fact, really true) was fishing salmon on the Pinware River, in Labrador, Canada. His stomach was acting up. Down near the neck by Seapool, people were lined up and everyone who made it down to the “biting rock” caught salmon. Suddenly, J.D. felt his bowels turn to ice water. He turned around. Behind him were at least five others. If he went ashore to relieve himself, he would lose his place in line. When J.D. turned around again and looked back downstream, the next man hauled up a fish right before his eyes. At the same time, he felt a sharp twinge as his stomach bubbled. So, J.D. shit himself. But he got his salmon.

Three wild salmon rivers
“When is the best time to fish?” The most straightforward reply is: “All the time”.

No, I’m not saying that all anglers are prepared to take it this far. The choices in life are too many. But I believe that many fishers who look themselves in the mirror and examine their motives are sometimes surprised at the choices they make. Fishing has that effect on us. How many have not had to make a choice? “I or my fishing gear?” and have saved their rods, at the last minute, before the door slams shut for good. Although our passion for fishing can mess things up for us, it also has a way of healing the wounds from the wrong choices we have made. No, I don’t think the choice to “go fishing” is the solution to everyone’s problems. On the other hand, I do believe that if everyone went fishing, there would be considerably fewer problems. Only when you really spend time with yourself can you truly learn to know yourself. It isn’t particularly complicated. It just takes time.

"On the other hand, I do believe that if everyone went fishing, there would be considerably fewer problems."

“No, you’re not suicidal after all.” Those were her words, the psychiatrist I visited to find out why I was so damned dejected. “No. How could I be? The mayfly nymphs are hatching.” “Mayfly nymphs?” said the doctor, giving me a quizzical look, “You’ll have to explain.” But how do you explain to someone who has 300 university credits that life has taken a turn for the worse and the only thing that is keeping you afloat is a mayfly whose Latin name is Ephemera vulgata. Sometimes I think it may have been cheaper if I hadn’t even bothered.

Midnight salmon in Swedish Lapland
But how do you explain to someone who has 300 university credits that life has taken a turn for the worse and the only thing that is keeping you afloat is a mayfly whose Latin name is Ephemera vulgata.

And what is a fish, really? Ultimately, that is a natural question that we must ask ourselves, especially if you, like I, have spent innumerable hours trying to catch fish. In its element, water, we perceive it as a shadow, an apparition that suddenly appears in a fleeting instant. Some maintain that the fish is the creature from which we humans have evolved. The lungfish is often mentioned in this context. Suffice it to say that we live the first months of our lives like a fish, in the protection of our mother’s womb. In fantasy, the fish represents our desires, like the mermaid who beckons us.

But the fish can also be an image of our fear, like Captain Ahab’s struggle with the leviathan and Jonah in the belly of the whale. In the Far East, the fish is a symbol of peace, order, strength and perseverance. The fish has sacred significance in the Jewish Passover and is an important figure in Christ’s miraculous feeding of the multitudes with only five loaves and a couple of fish. The fish as a symbol in Christianity is nearly as old as the Christian faith itself and thus a symbol for our entire western civilisation. Pisces, the fish, is the twelfth sign of the Zodiac, and the beginning and end of the astrological year.

In erotic art, women have been portrayed having sex with octopuses, and penises are represented as suckerfish. In Günter Grass’ book “The Tin Drum”, the eel is widely interpreted as a phallic symbol. The fish as both seducer and destroyer fascinated psychoanalyst Carl Jung. He thought that fish, in our dreams, could symbolize, among other things, human ambition, avarice, lechery and greed. But it also stood for religious fervour. Others besides fly fishers can probably attest to the latter. In short, fish live in our fantasies, our memories and roaring rivers, quiet streams, lakes and oceans. That’s why we prepare to make one more cast – now that winter has let go. 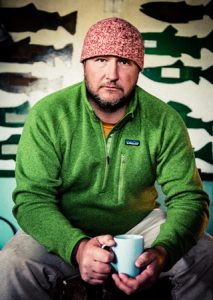 worked as a freelance reporter for 25 years. He got his paychecks from the New York Times, Forbes Life, Outside Go, Men’s Journal and others. Nowadays he resides at the railway station in Lomselenäs in Sorsele. The same railway station his mother used to manage 50 years ago and just 300 meters from Juktån, the river that runs through Håkan’s life.

A tanked-up car, robust rod holders and a few intensely driven salmon fishers as the company is an excellent start if yo... 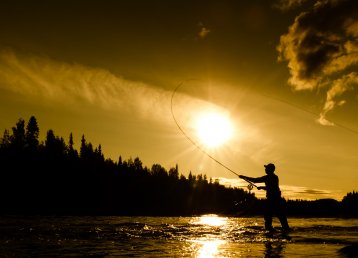