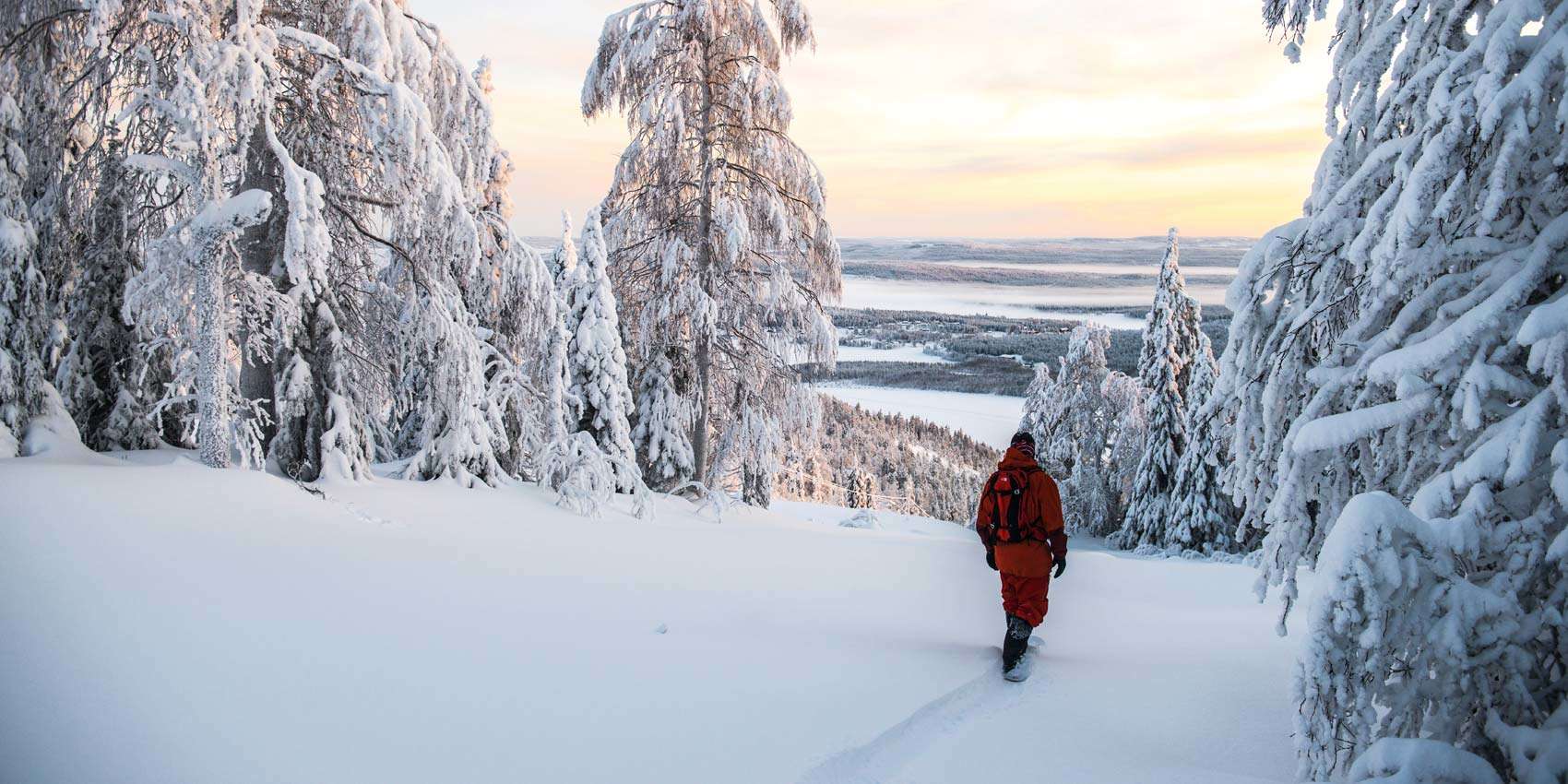 Good skiing usually depends on one thing and one thing only: good snow. But good snow has many enemies. Sunshine, temperature and wind can all mess with the fluffiness of snow. It’s best protected by forest, and allegedly the best forest grows in Svanstein.

Flashback: The kids are first to discover the police car in Svanstein: snowed under, in the park. Their happiness is total. Get the Go-Pro out to produce another Youtube video.

The dad, Mange, and I decide that neither park nor police car is our thing. We go for a ride to check things out. There are some people on the slopes. The east-facing slopes, away from the main area, are empty. There are ten centimetres of fresh snow on the piste. In the borderland between slopes and forest, there’s even more. More keeps coming down. 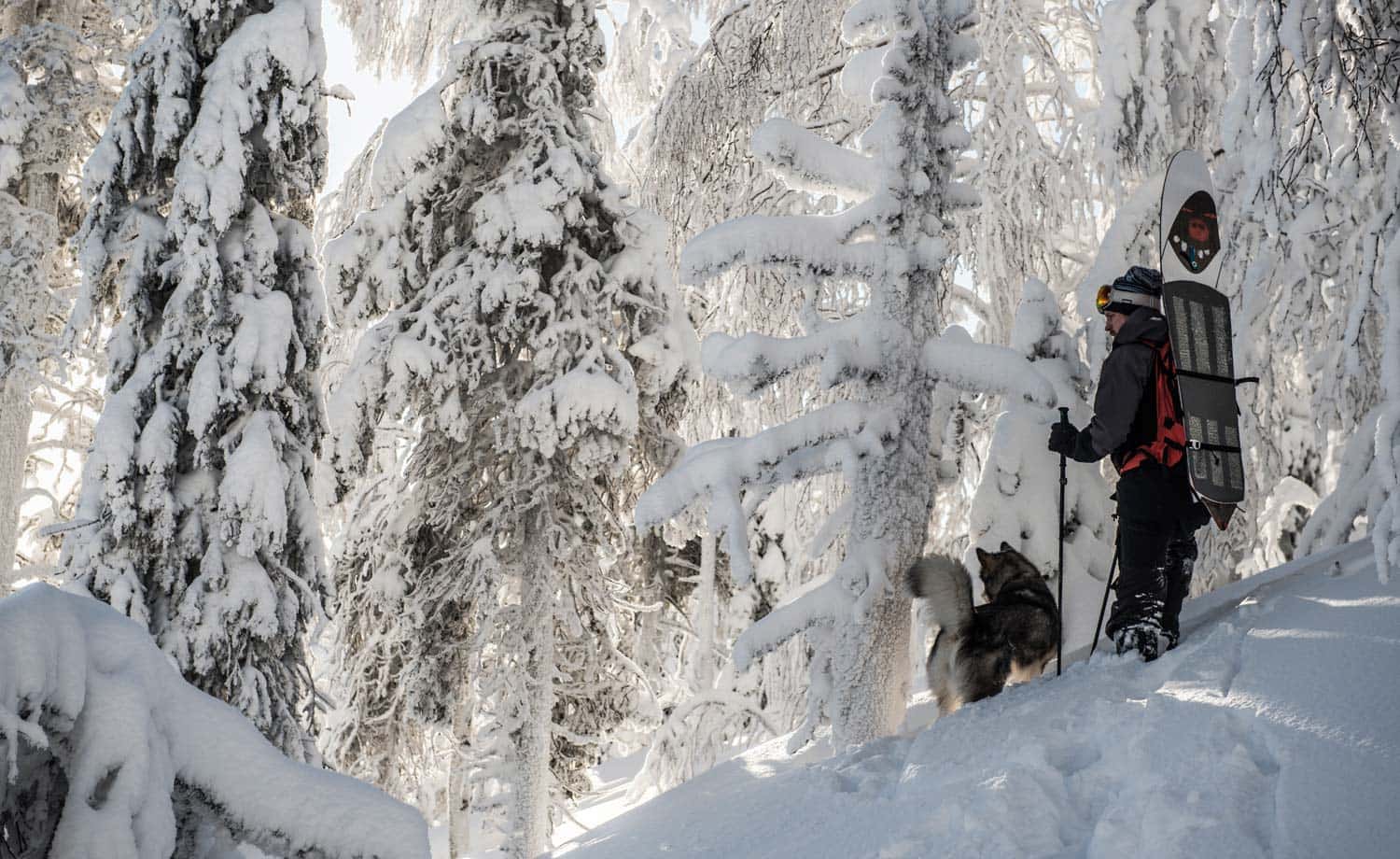 I don’t know what the others are doing. I don’t even know where the others are. I just know that I don’t care. This stop of ours by a mountain in the Torne Valley was meant for the kids to burn off some energy instead of forever messing about in the back seat, but it has a new meaning all of a sudden.

The resort doesn’t close until five in the afternoon. We won’t stop until then. It’s too good, surprisingly. 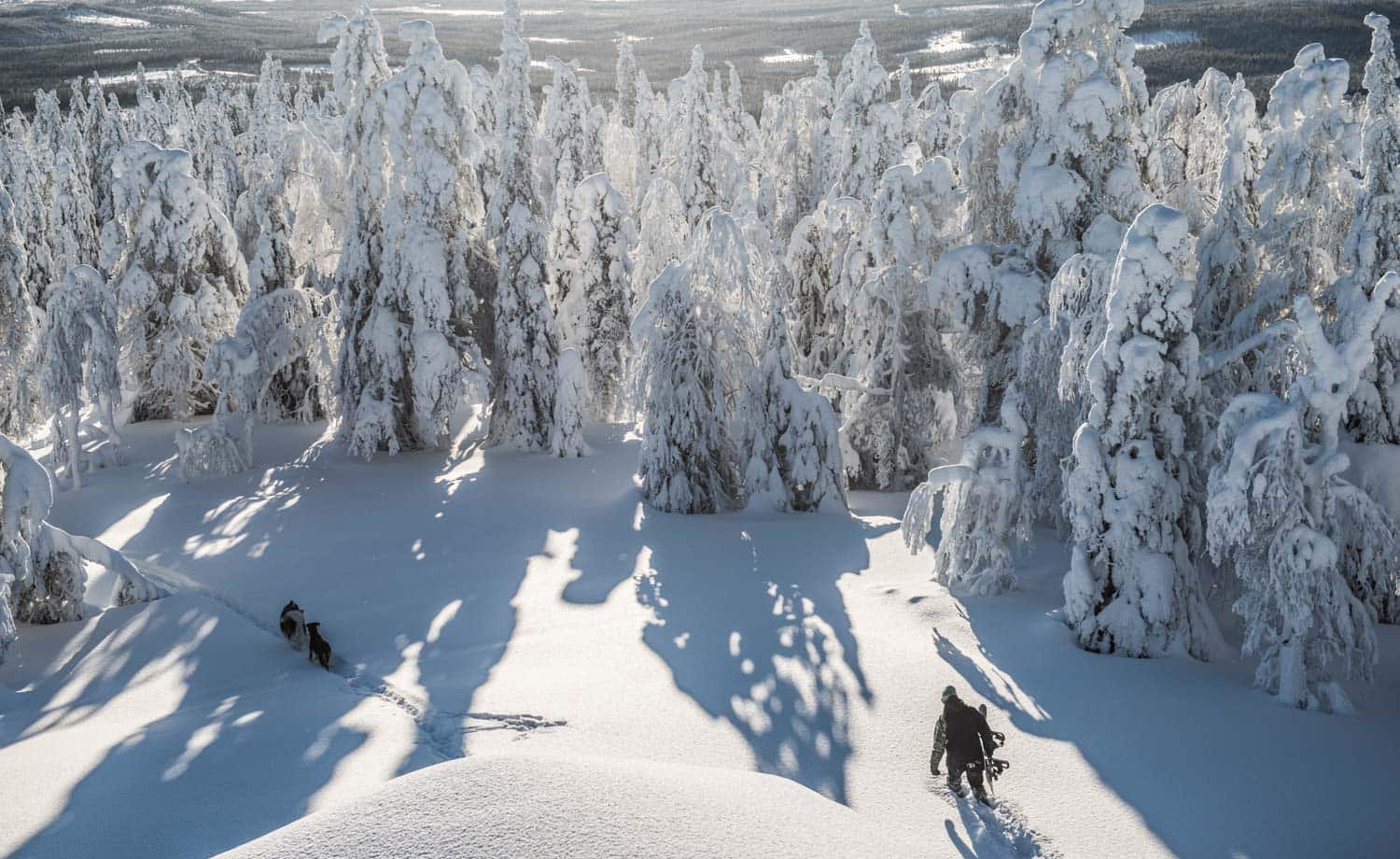 The best time to go skiing

Normally I don’t answer purely existential questions – there’s rarely room in life to be definite about anything general. But the answer to this question is really obvious:

– You should go skiing when you are able to!

It’s that simple: all skiing happens best exactly when it happens. 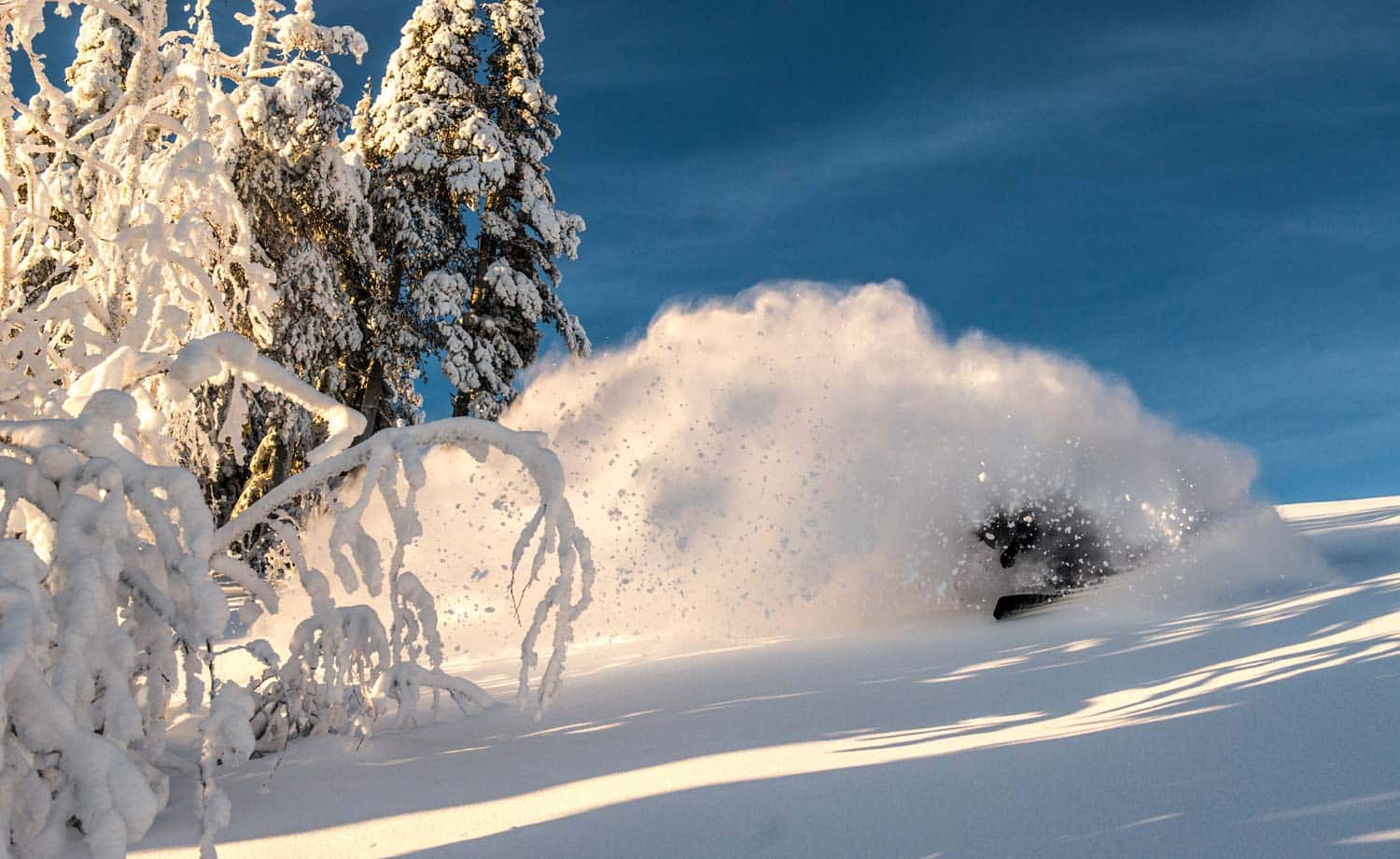 No, I’m not into skiing because I think it’s especially important. It’s just like fly fishing, cycling or canoeing. But I know that skiing keeps me away from a lot of other things that are just as unimportant. So if I’d compare powder turns on a forgotten slope in the Torne Valley to going to the bank, clearing out the garage or attending the next quarterly meeting of the Housing Association, I’d much rather go skiing. Today it happens to be in Svanstein. And other people are elsewhere.

Svanstein Ski used to be called Pullinki Ski. The place has an unfortunate ability to go bankrupt. It’s a shame. If you compare it to many other unimaginative skiing mountains in the country, Svanstein deserves more visitors. But of course – it is where it is. The nearest Swedish airport is in Luleå, 200 km away. But still. 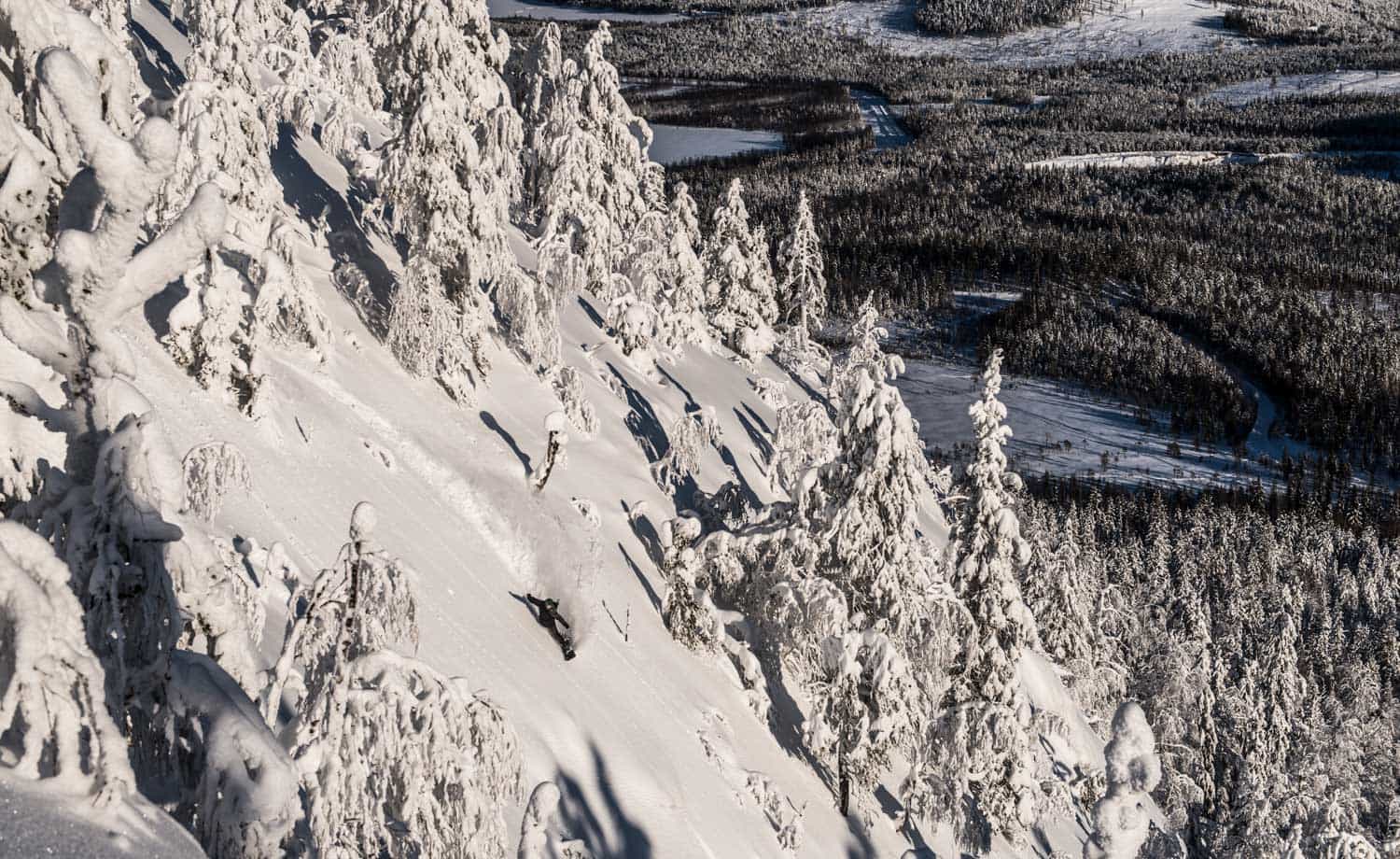 The runs glide down the mountain as if they belonged to its very profile. As if they were mountain streams finding the easiest way down. The forest is sparse like a cathedral of light and the snow – yes, today the snow is crazily deep and pristine.

Mange and I find it hard to stop skiing. The kids have lost their interest in the police car, and YouTube is sorted. But we, the parents, don’t want to stop. Our skiing experience tells us that days like these just don’t happen often enough. 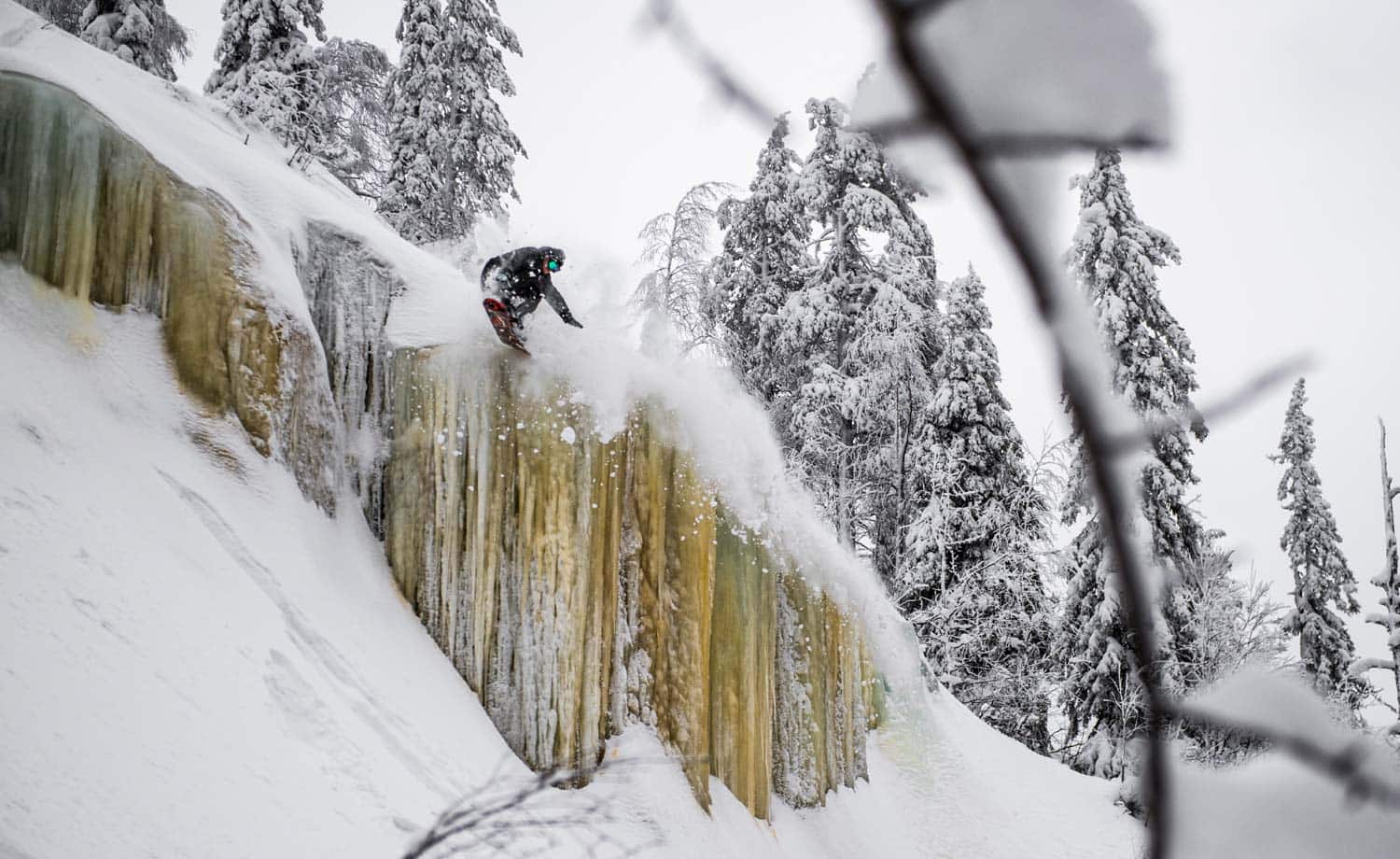 A new lease of life

Fast forward: today Svanstein has been given a new lease of life. The snowboard legends Ingemar Backman, Jacob Söderqvist and Johan Olofsson hang out here. In their wake others have turned up, of course. Svanstein faces renovation and expansion. The plans are bigger than they’ve been in a long time. The forest on the mountain has been thinned out to allow more space for forest skiing. Because even if the forest grows on the northern side where it’s sparser than on the sunny south side, it’s not always a powder motorway. But it’s good enough that some of the best snowboarders in the world and other skiing enthusiasts have found this location in the heart of the Torne Valley. 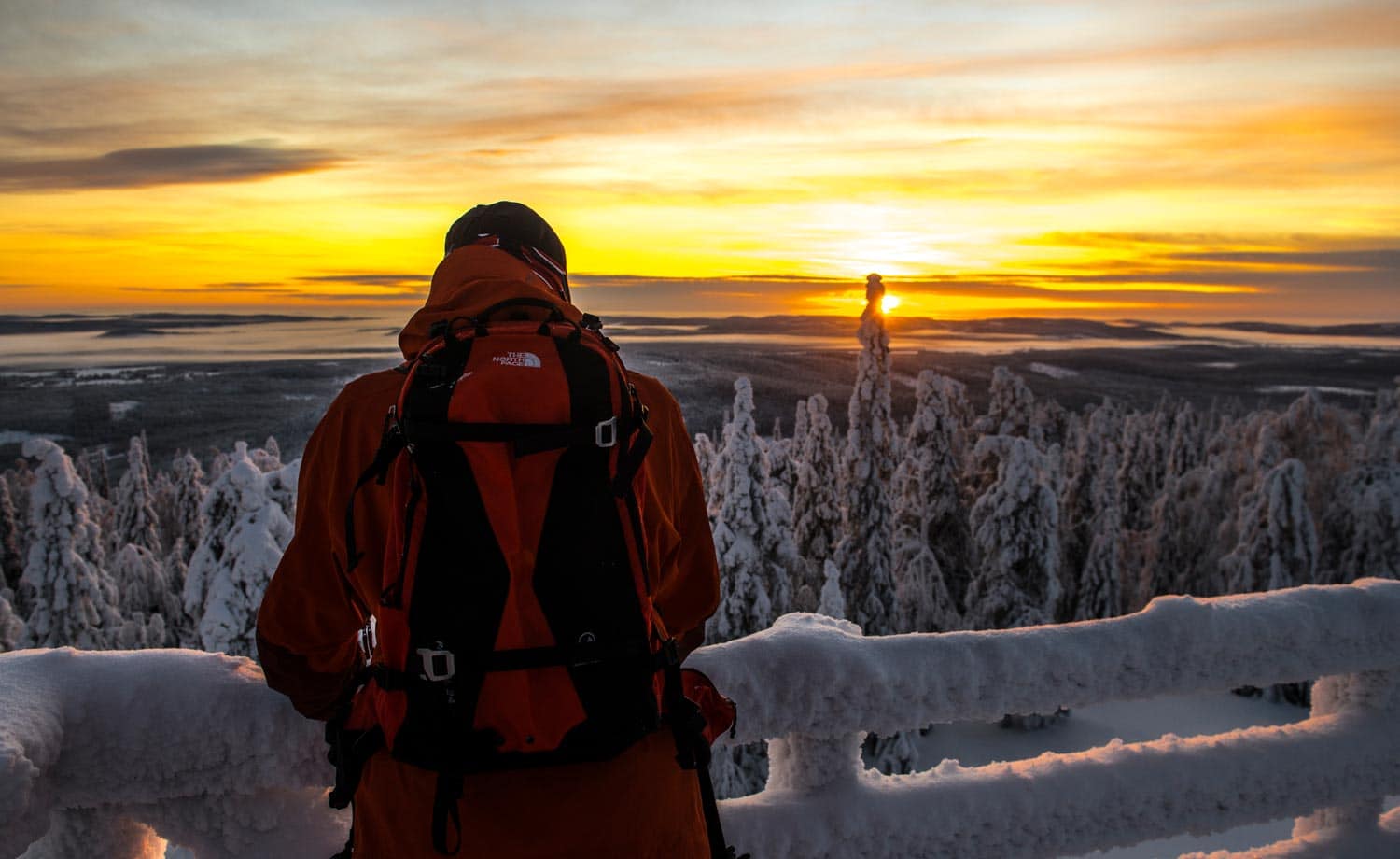 Jacob Söderqvist from Svärdsjö, born in 1976, finished 6th in halfpipe in Nagano 1998. The first time halfpipe was part of the Olympics, when the sport was perhaps at its greatest. The podium featured heavyweights Gian Simmen, Daniel Franck and Ross Powers, and finishing 6th was an impressive feat. Gian Simmen would go on to become world champion several times. Daniel Franck won the first X-games and Ross Powers became an Olympic champion in the following Olympics. Sometimes we don’t understand how good a sixth place really is – until long afterwards.

Into the winter at Riksgränsen

Ingemar Backman, born in 1976, also competed in Nagano but did not qualify for the last jump in the final. These days he plays poker and skis powder in Svanstein.

1996, at the King of the Hill competition in Riksgränsen, Ingemar made one of the most famous jumps in the world: an 8.5-metre high ‘backside air’ in the classic quarterpipe. The jump ended up on the cover of seven of the biggest snowboard magazines in the world and Ingemar Backman from Gällivare became an even bigger celebrity, with his own snowboard models.

Pierre Wikberg from Piteå caught it on film, which became the foundation for his own life as a filmmaker in this particular culture. In the very same competition skier Janne Aikio made a jump that was almost as high, making it onto the cover of American Powder with the headline: ‘The next big thing’. 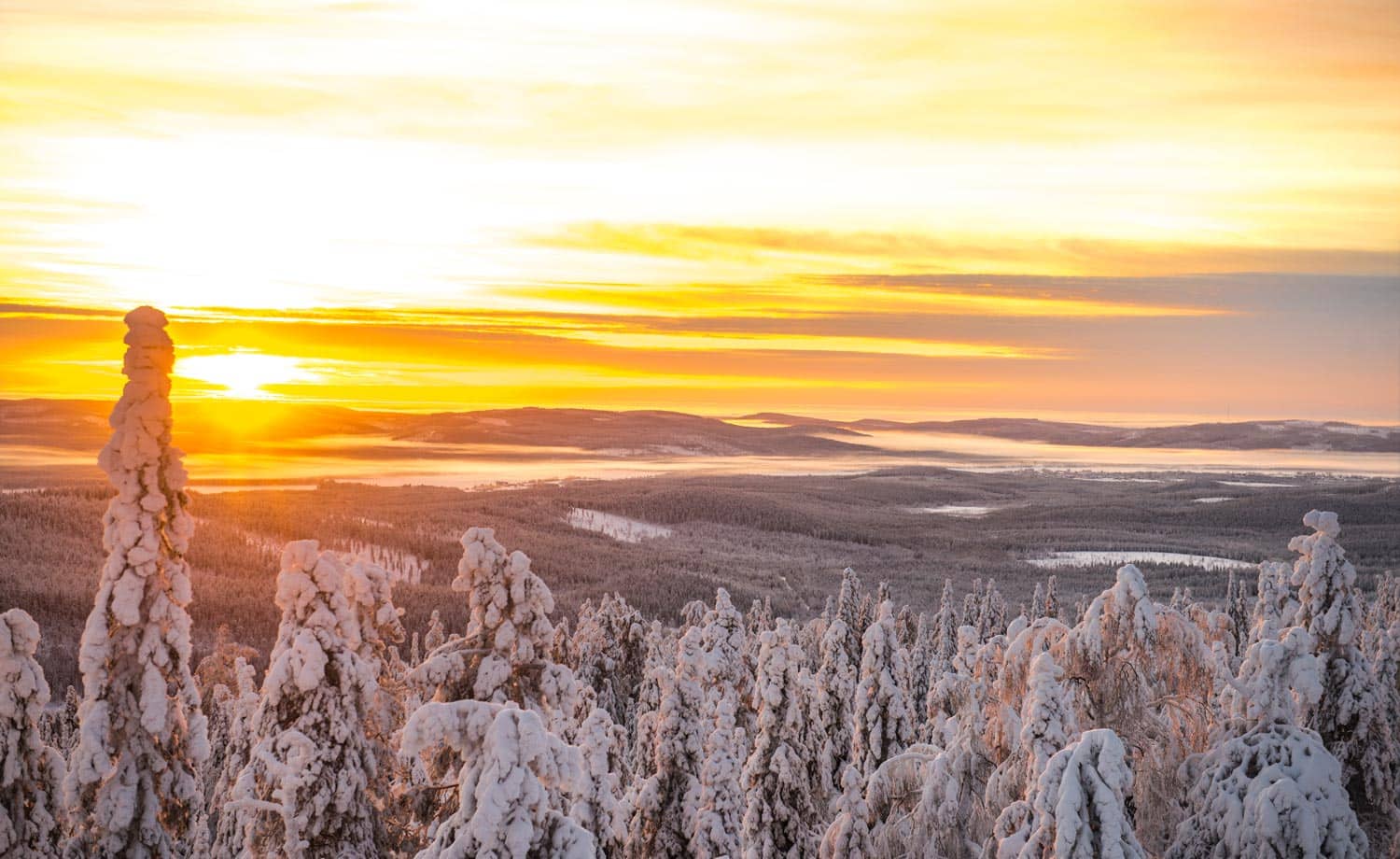 There’s something special about Gällivare and snowboarding. It wasn’t only Ingemar Backman who became as famous as a rock star, Johan Olofsson did too (he was also born in 1976).

1995, in a pioneering scene for Standard Film’s TB5, 19-year-old Johan Olofsson took most people’s breath away. Huge jumps, some first descents – among others a run called Curious George, wonderfully filmed, and then the classic finish: a 1000-vertical-metre face with a 50-degree slope that Johan pulls off in half a minute. All of it filmed in one sequence with fierce hardcore music in the background. Of course it was a hit. But Johan had enough of the hype, the rock-n-roll and the contracts. These days he skis a noboard – a snowboard without bindings – in his Nokian boots on whatever board works best that particular day. His preferred company is his dog Juno. 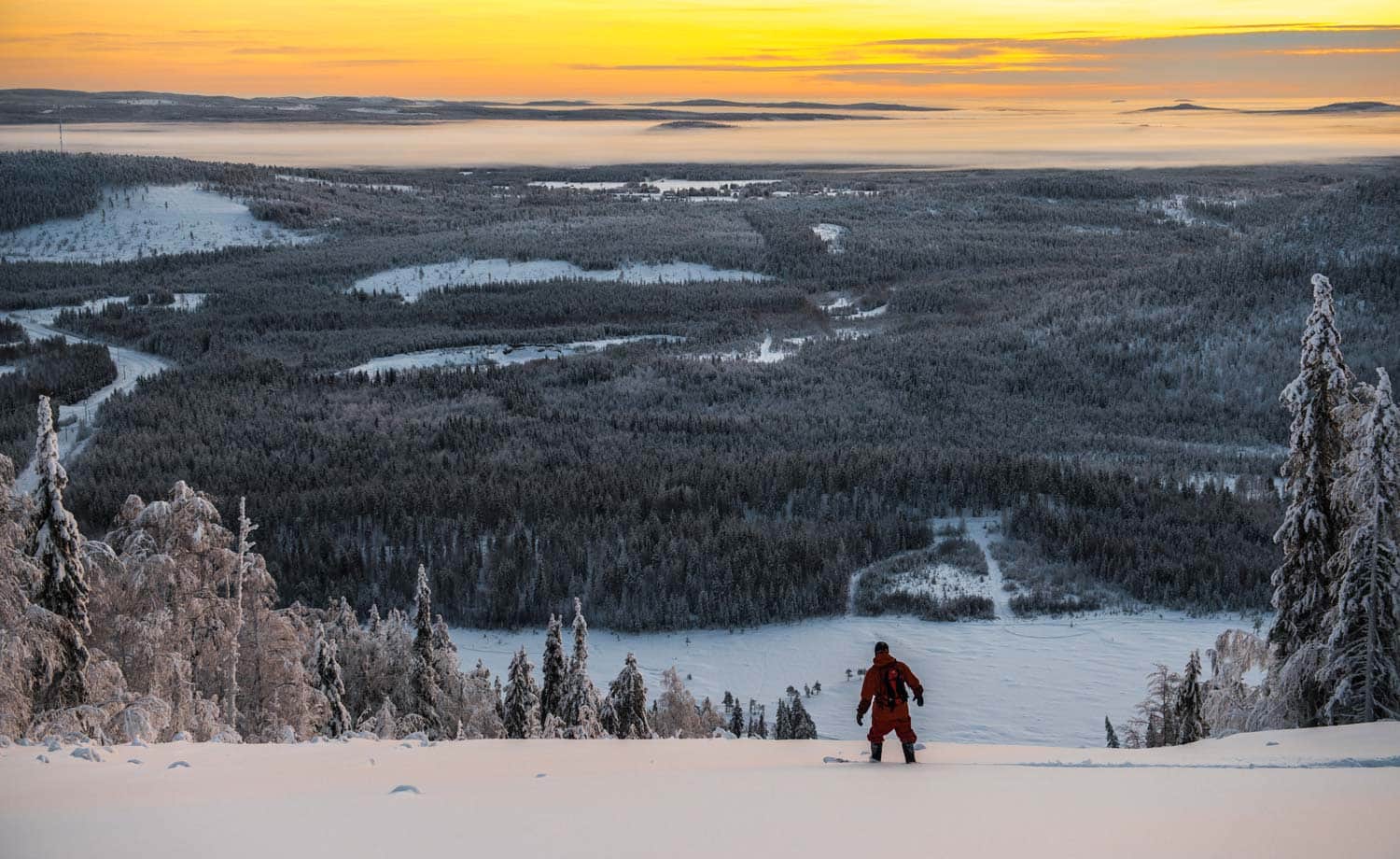 Svanstein Ski is located close to the Torne River in Övertorneå. At Svanstein Ski you can stay in cabins or at the camping ground while you ski downhill or cross country. You will also find a range of other activities in Svanstein all year around. The nearest Swedish airport is in Luleå, 200 km away. Read more at svansteinski.com.

Not many people have found this place

I’d ideally like to write a more Mikael Niemi-inspired story from the Torne Valley. Make something more of the text. Capture the gloom based on northern curses, deep snow, lumbago and more curses. But I’ve bought the whole package, straight up. The only thing helping me to stay more or less ironic is the fact that not many people have found this place. The talented writer Johan Weimer writes in Åka Skidor (issue no. 6, 2016) about Svanstein:

“I find myself having to film snowflakes that silently land on my face as I’m stood waist deep in the brilliant white glory. The snow-covered, snow-shaped fir trees have long since given in and keep their branches close to their trunks. Here I am, in the middle of paradise…”.

Don’t get lost in myth and vertical drops. It’s always better to ski than to just talk about skiing. Finnish ski jumper Matti Nykänen, hardly a poet but with definite rock-n-roll ambitions, summarized it best when he said: ‘Life is a person’s best time’. It’s never been put more succinctly.

Put your skis or your board on and go. It’s a long time until the final run.