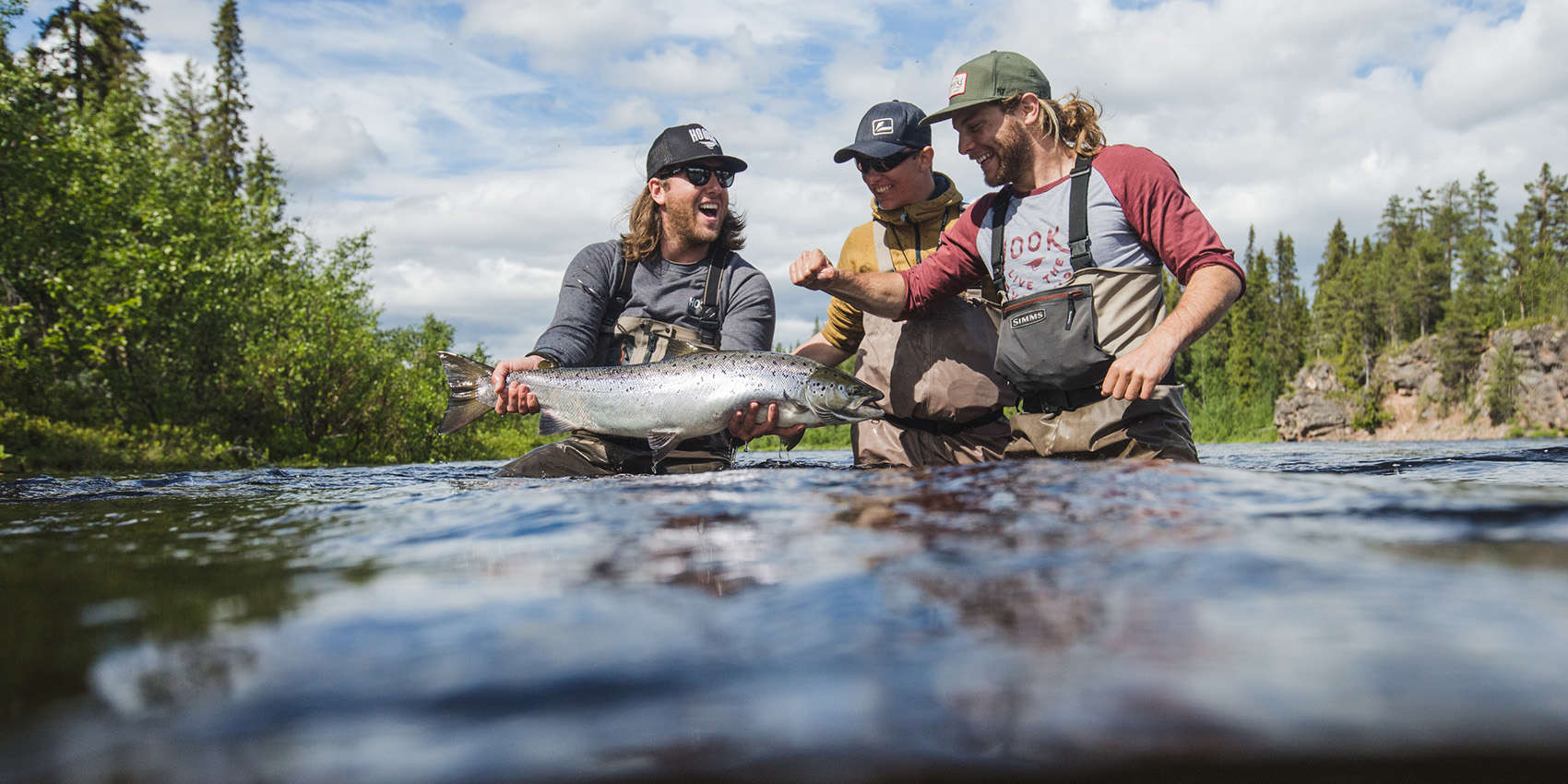 As the renowned crew of fly-fishing filmmakers Hooké from Canada, touched down at Luleå Airport, they didn’t really know what to expect of Swedish Lapland – but soon they got overwhelmed by warm welcome of big Baltic salmons.

An all-out 24/7 road trip over two weeks ensued, taking the crew to 5 of the best Baltic salmon rivers Sweden has to offer, Byske, Torne, Lainio, Kalix and Ängesån.

Deep within the forest, the Hooke crew quickly learnt that if Swedish Salmon are on the catch list, then any willing angler must put themselves on the menu for the plethora of mosquitoes and all things buggy looking for a quick meal. Next, a quick transition to uncomfortable hours, approaching the mid-summer day, night time in the arctic circle can be difficult to distinguish and with long hours of dedication on the river, anyone can certainly loose track of time and occasionally which day it is. 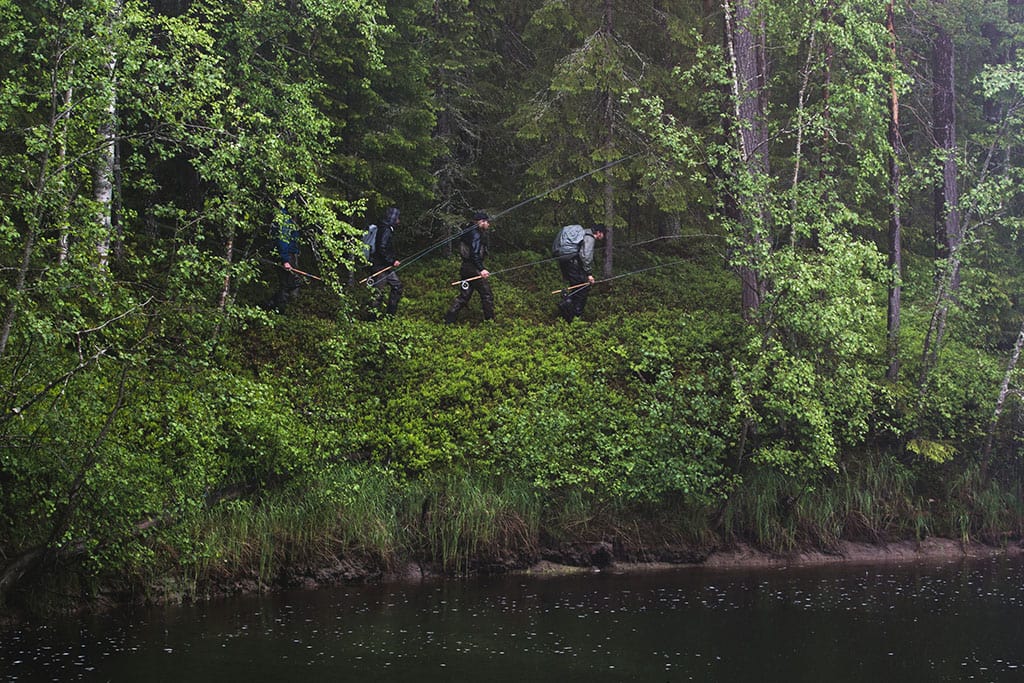 First stop, the Byske River and the most southern river of our epic adventure. Hooké met with local fishermen Ted Logardt and Calle Lundqvist and spent 2 days exploring the forest-lined river. Many salmon were covered with all techniques in the book, but hot conditions in the air and water kept the salmon off the take. Despite no fish landed, the crew saw more Salmon than ever before and even snapped some leapers heading up the Fällfors rapids.

Next stop a 300km overnight ride north to the famous Kengis Bruk beat on the Torne River landed the crew in time for the prime time 3:30 am drop with their host Lars Munk. The first glimpse of the mighty Torne river had the Hooké drew doubting their double hand casting skills, not helped any further by witnessing Lars shooting seriously impressive lengths of line out across the water.

An estimated 52,000 salmon had already entered the system, many fish had been landed and all the pools were alive with new run salmon. Hanging out by the fire, drinking coffee after coffee, discussing fly and line choices and hoping for the magic to happen, suddenly at 01:30 the next morning, the first fish was landed and after a short rest, persistence paid off with a second Baltic chromer beached. 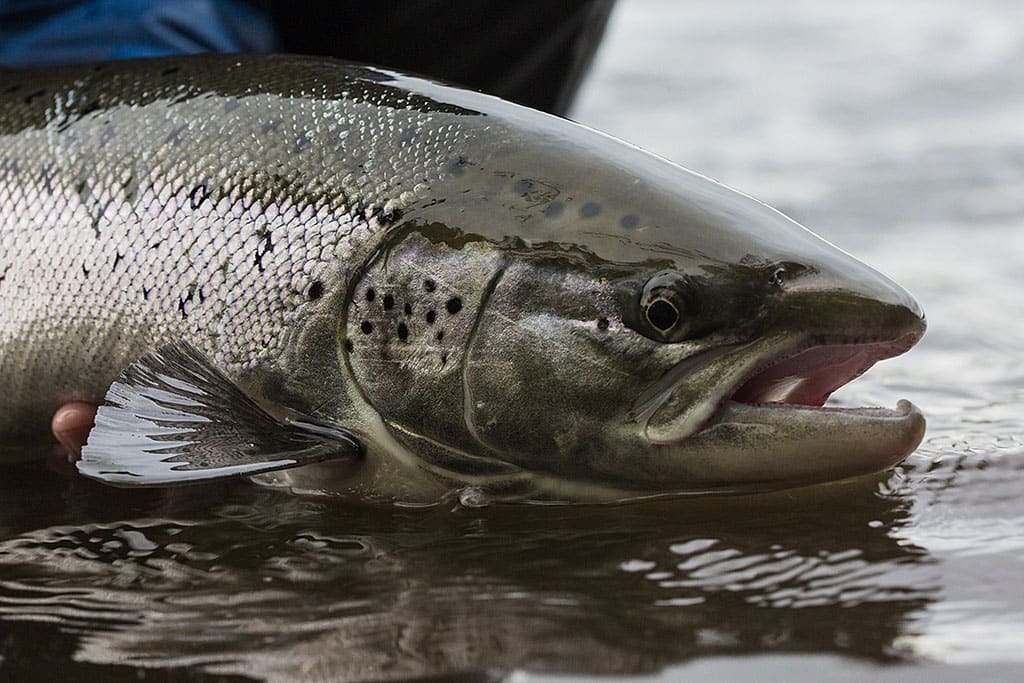 Shortly after the first bout of success, the river rose another 30cm and at this height, Kengis Bruk in zone 2 reaches a peak in excellence for Baltic Salmon Fishing. With the water levels holding steady and the slight brandy coloured tinge running back to a crystal-clear flow, we did not have to wait long for the continual waves of fresh fish entering the pools. During the night 9 fish were hooked and lost almost one after the other before finally 2 fantastic fish were landed, including one by Calle Lundqvist who hooked most of the fish during the night.

As the sunlight broke over the top of the forest tree line at 04:00, we were treated to the first golden shimmer of light over the water, beckoning the use of the famous Banana fly and offering a welcome bit of warmth after a few days of continual rain and colder conditions. 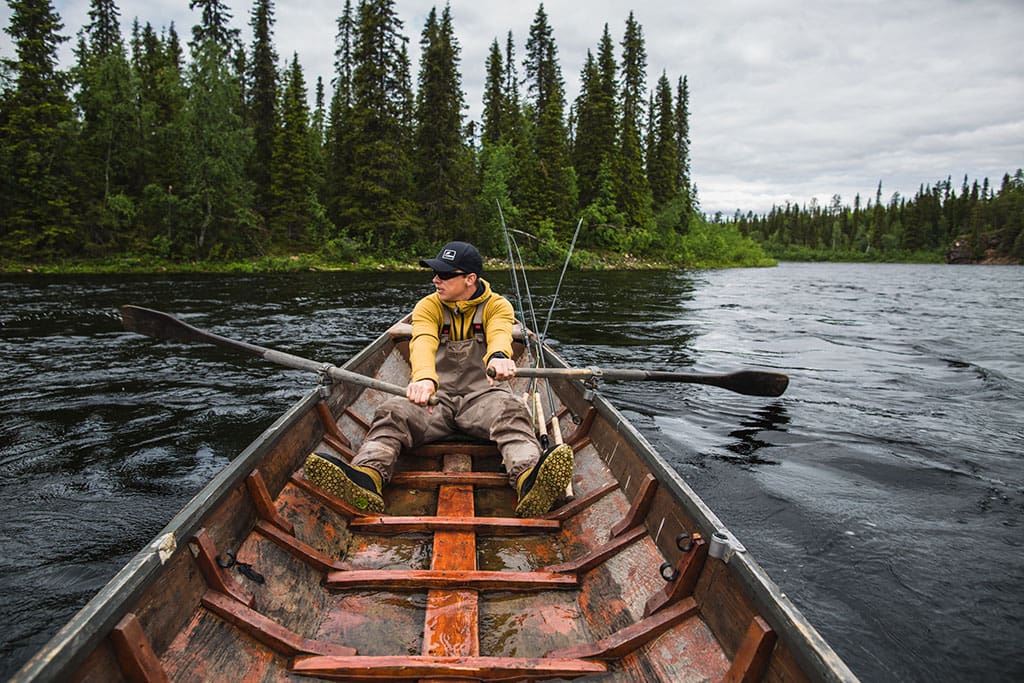 A night to remember

As Lars and the Hooké crew hit the water, Jay Bartlett the owner of Fly Fish Scandinavia, set up the tying gear in his car and tied one of his favourite patterns that may be worth a shot in the bright conditions we were presented. Within 10 minutes of tying the fresh fly on, he hooked into the first fish of the day, an immaculate 16 pounder that put a serious smile on his face. Just minutes later the Hooké crew were in again, this time on a traditional Canadian fly and a mean-spirited male fish that made many runs each time it came close the bank and by this point, spirits were soaring high.

Enjoying a short break with more coffee by the fire, Lars decided to give the pool another run this time grabbing Jay’s rod to give the new fly another swim. Within minutes we heard Lars shouting from downstream with yet another fish on. This was by far one of the best mornings fishing we had all experienced and as Lars expertly brought his fish to land, there was not a single face without a smile as wide as the river. That night many more fish were hooked both lost and landed between 16 and 20lbs. 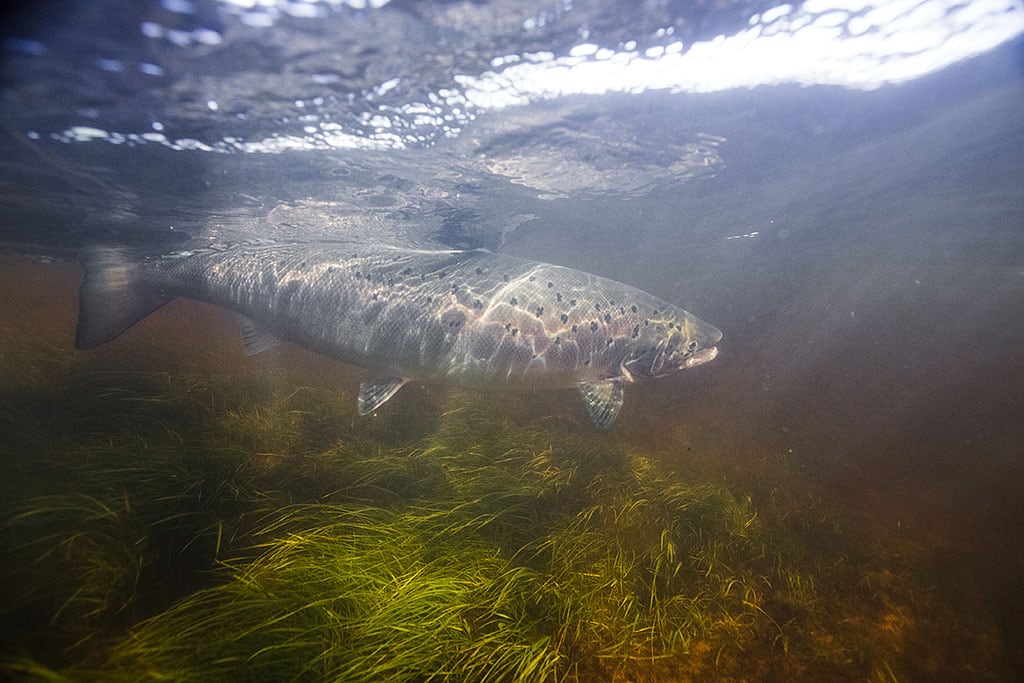 The cliffs of Onka

The following day the road trip brought the crew even further North, 75km to Pinetree Lodge in Kangos town situated nearby the Lainio River, a large, smooth flowing, yet shallow tributary of the Torne River where some 60% of the running Salmon head to each year. The water was some of the most beautiful and majestic flows and scenery the Hooké crew had ever seen and certainly holds a special place in all our hearts. Lars Munk directed the crew to Camp Onka, a fishing Camp he himself developed several years ago, situated on top of a large cliff overlooking a striking 90-degree bend in the river and a famous spot for holding big salmon throughout the short but intense season.

It wasn’t long before Hooké landed their most beautiful Baltic Salmon of the trip, with tight lines and racing hearts, the euphoric rush as reels peeled outline and more beautiful salmon abruptly broke the surface, cartwheeling through the wilderness air made for an unforgettable experience. Celebratory fire sausages and a few drams of whisky over favourite stories topped the evening off in style. 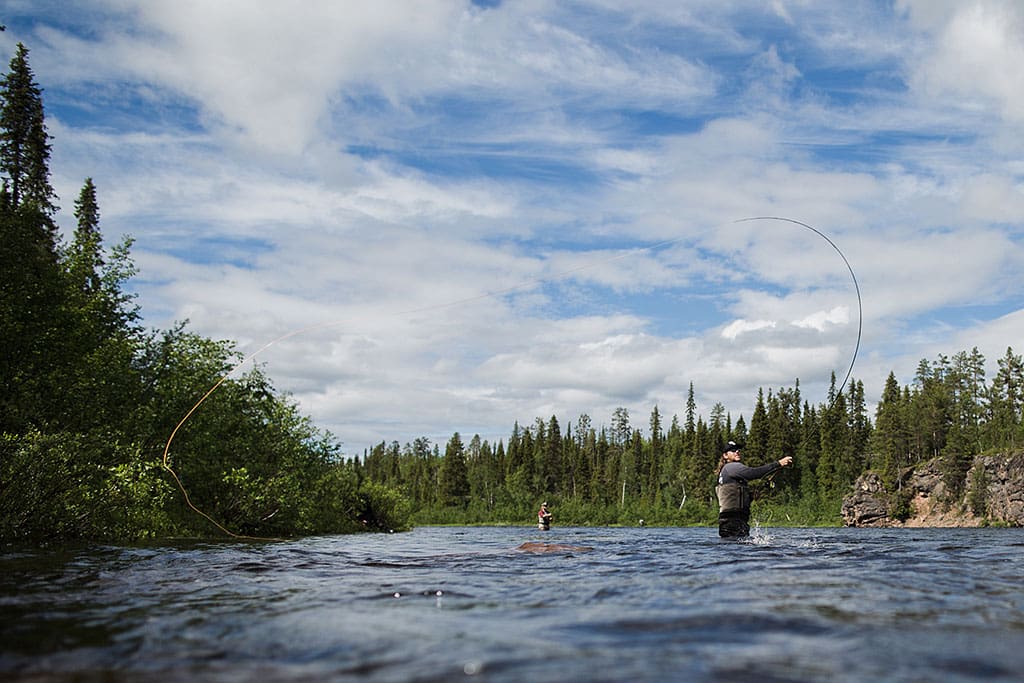 At the cliffs of Lainio.

The following day our Adventure continued downstream to the expansive Kangos waters on the Lainio river downstream of Camp Onka, to meet with local legend Kristian Stridsman. Born and raised in Kangos, there may be no one else that knows the water better than Kristian and in 2015 on a visit to Kengis Bruk on the Torne river he was rewarded with 2 fish of a lifetime 128cm / 43.7lbs and then 116cm / 35lbs. Kristian led the crew to a favourite stretch of water that once again yielded some fantastic results, more salmon landed and more celebratory fire sausages and coffee on the river bank were required!

We left the Lainio river valley with the highest spirits and set course for our final destination, the mighty Kalix river at Jockfall! The legendary falls cascaded at a velocity so hypnotically mesmerising that the sheer power of the river, begged the question just how strong do these Salmon have to be to make it through the falls? As we approached the mid-summer day, conditions in the air and water had reached an uncomfortable high for a chance of success. Over the coming days we fished hard through day and night, even travelled a few times to the local tributary Ängesån. Both rivers offered spectacular scenery in the glowing day and night sun and continual activity in the water from running salmon, but throughout the time fishing we could not tempt any fish to the fly and perhaps a rest was long overdue, before getting back on the water for one last try at the Baltic Behemoths. 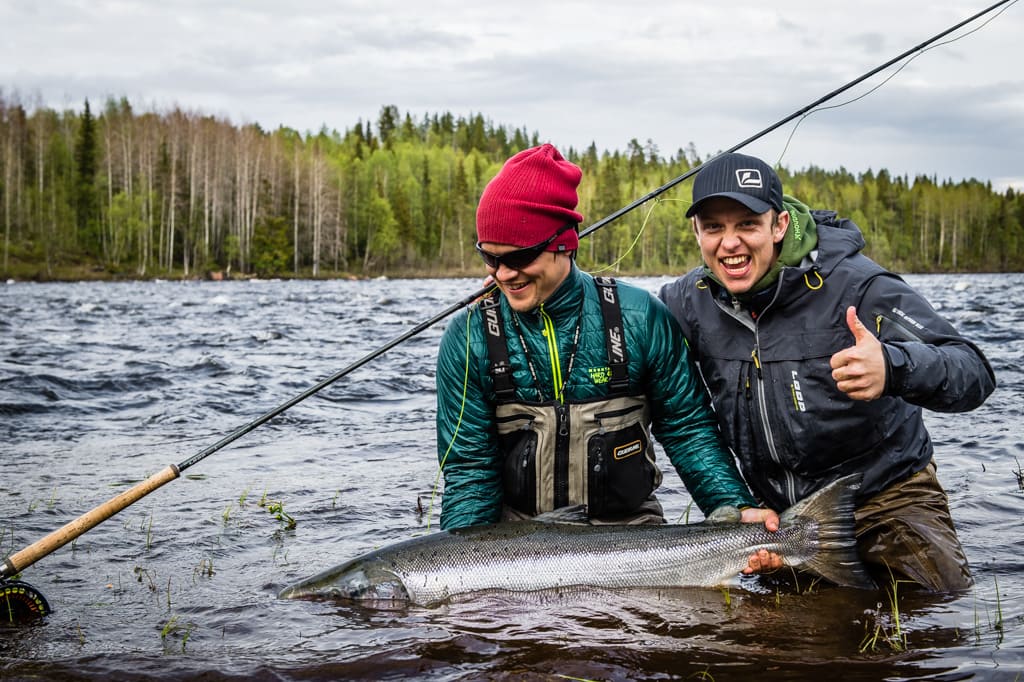 Born on the river in 2012 Hooké is a crew of artists, photographers, filmmakers, and writers who are passionate about creating a fly fishing community, experiencing epic journeys, and giving a voice to those they meet along the way. More Laplanders-content from the incomparable Hooké are to be found at hooke.ca/blog

After a good few hours, rest and recharged batteries, local fly fishing extraordinaire and champion fly caster Ronny Landin treated the crew to insightful local knowledge and traditions including the famous fish dish called Surströmming. Anyone who knows this dish will know to stay well clear of it unless you are Scandinavian, then a small percentage of you may enjoy it. With a huge dose of Swedish culture and more great stories shared it was time to take one last plunge into the mighty Kalix River, to try and lure one last salmon to our flies. Finally, in the dying hours of our epic adventure, as we were making our way up to the car to leave, Salmon guru Calle Lundqvist shouted from downstream to lead us down to the magic moment, a Kalix river Salmon coming into land and signing off 2 weeks none of us will forget anytime soon.

The Baltic Salmon continue to astonish us and have certainly sparked a new profound love within the Hooké crew also. As we departed, the Torne river system registered some 70.000 plus fish and as of the 12th of July, 85.246 fish have been registered through the counter and reached the magic 100.000 plus for 2016 as it did in 2014. The Laplanders will continue to target these magnificent creatures throughout July and August with hopefully many more fantastic stories to tell. For now… the adventure continues!