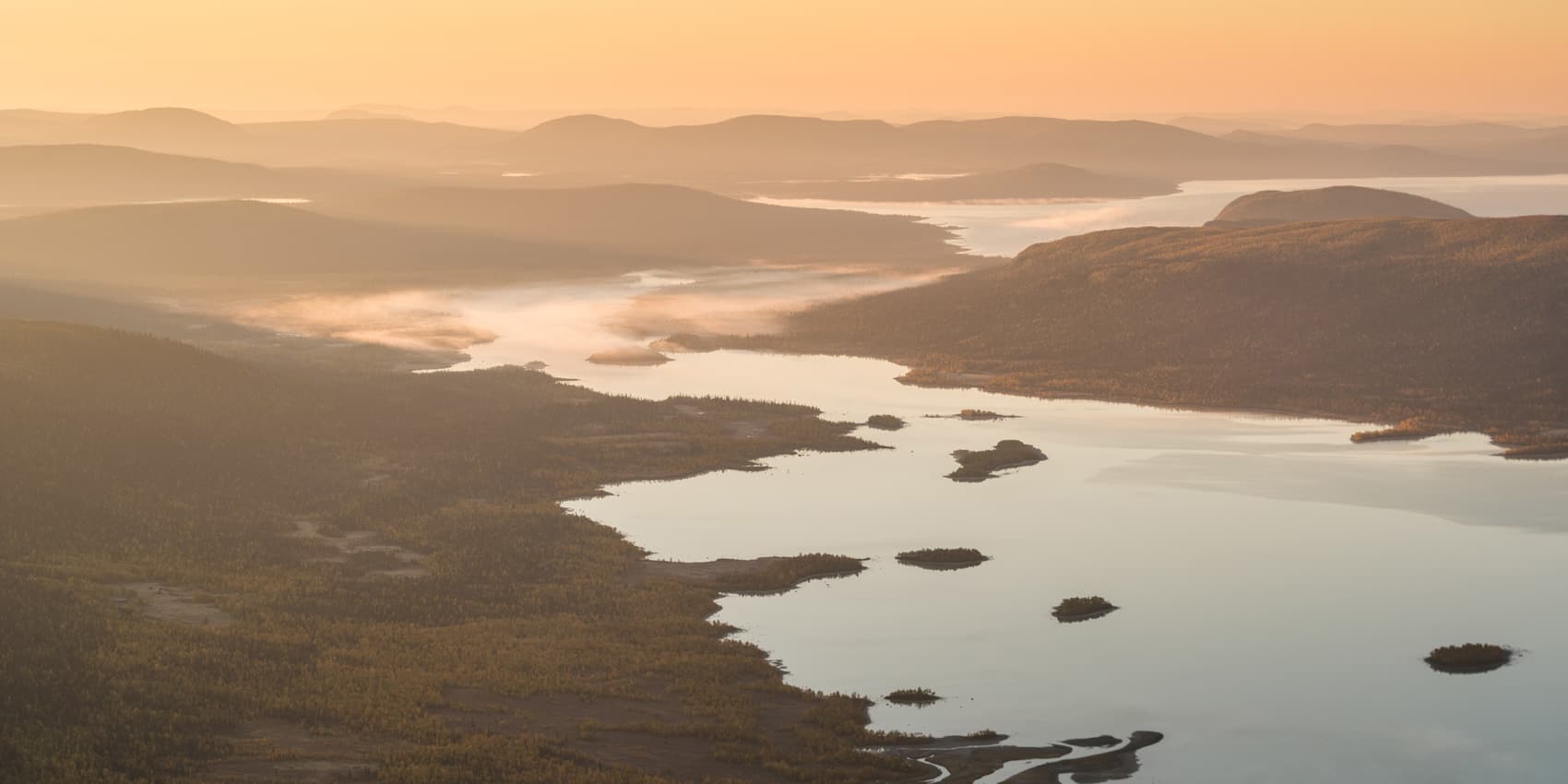 Speed upon the King’s Trail

The world’s most successful trail runner, Tina Emelie Forsberg, ran the entire King’s Trail in summer 2018. When others take three to four weeks to do a ‘through hike’, Emelie ran it in less than five days.

Tina Emelie Forsberg, born in 1986, is one of the most famous trail runners in the world. In the middle of the 2000s, she worked at Saltoluokta Mountain Station. She liked to run and got out into the Sarek National Park as often as she could. Mostly just because she liked it. In the evenings she talked to her colleagues about the possibility of doing the King’s Trail a little faster than normal. Perhaps running and hiking it in ten days or so.

At that time trail running was an emerging sport and Emelie Forsberg was far from being world famous. But in the summer of 2018, having been an elite runner for the last few years, she realised that surely you could do it even faster. Perhaps even record-breaking fast. So at the beginning of July 2018, she started from Abisko, aiming for Hemavan. A running trip along one of the most famous hiking routes in Europe, but at record speed. Emelie had decided to do it in five days, or less. We followed her along the way. 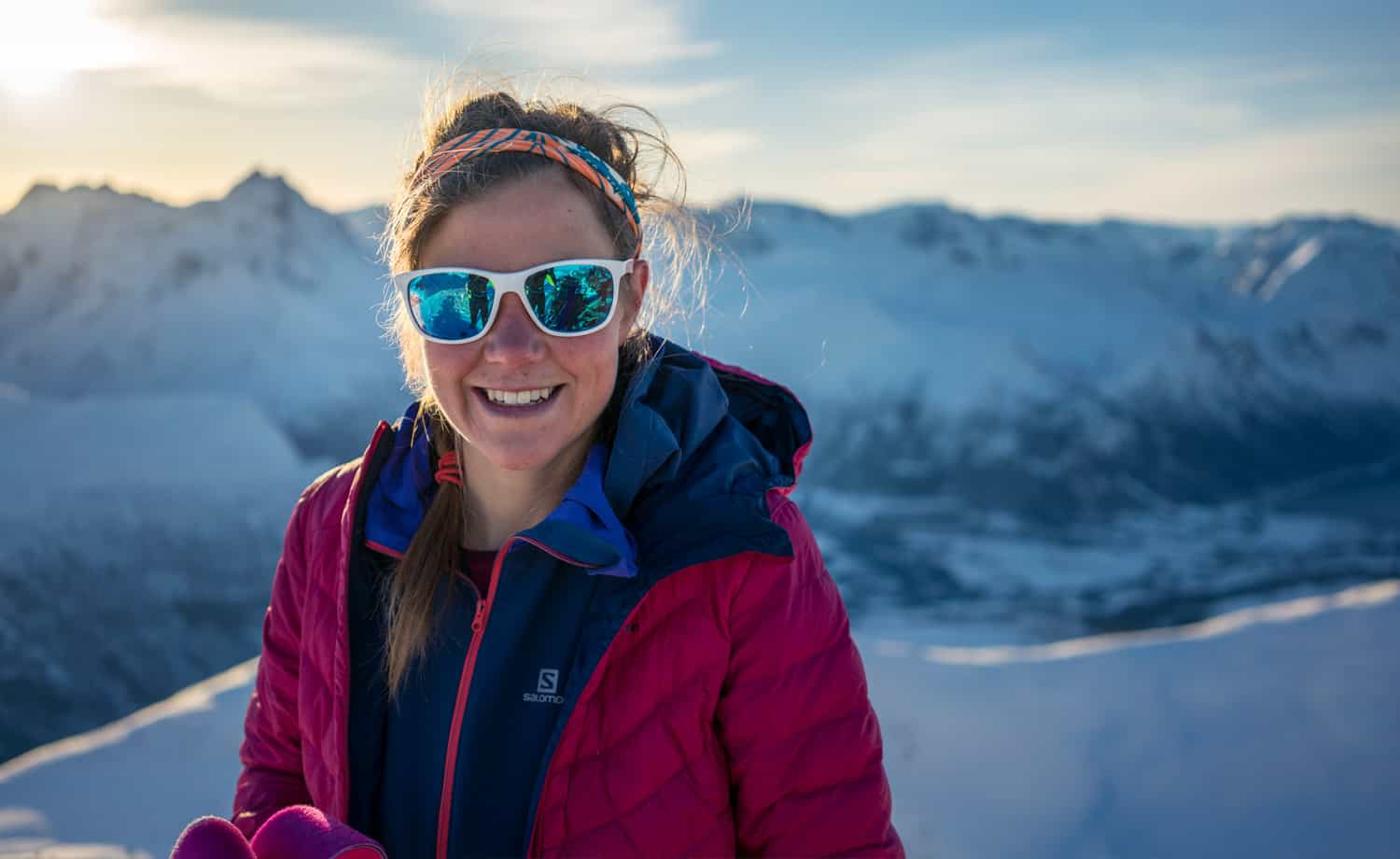 A double marathon each day

The classic hiking trail King’s Trail is around 450 kilometres long, give or take. Running it in five days means you have to run 90 kilometres, more than a double marathon, each day. In other words, it’s not an easy thing to do, not even if the terrain is flat. But running that far on a mountain trail is of course even tougher. You have to concentrate all the time, you have to place your feet right, you can’t just run on autopilot.

A couple of days before Emelie sets off we ask her about the challenge and the preparations. Because we want to know how much she actually trains.
– Of course, I train each and every week. About 15–20 hours a week depending on whether it’s the racing season or not.
– But this is the first time I run this far, for so many consecutive days, so we’ll see how it goes. I’ve got nothing to compare it to.

When we spoke to her about it, she was very humble. But now that we know the outcome, we know she did well. That she made it, thanks to the strength and experience she’s gathered as the best Sky runner in the world. Something else worth mentioning here is that the week before she started running the King’s Trail she got the FKT (Fastest Known Time) in the women’s class getting to the top of both Mont Blanc and Monte Rosa. Today she holds the FKT for Grand Teton, Mont Blanc, Kebnekaise, Matterhorn, Monte Rosa and the King’s Trail, and more. It’s an impressive list, to say the least. 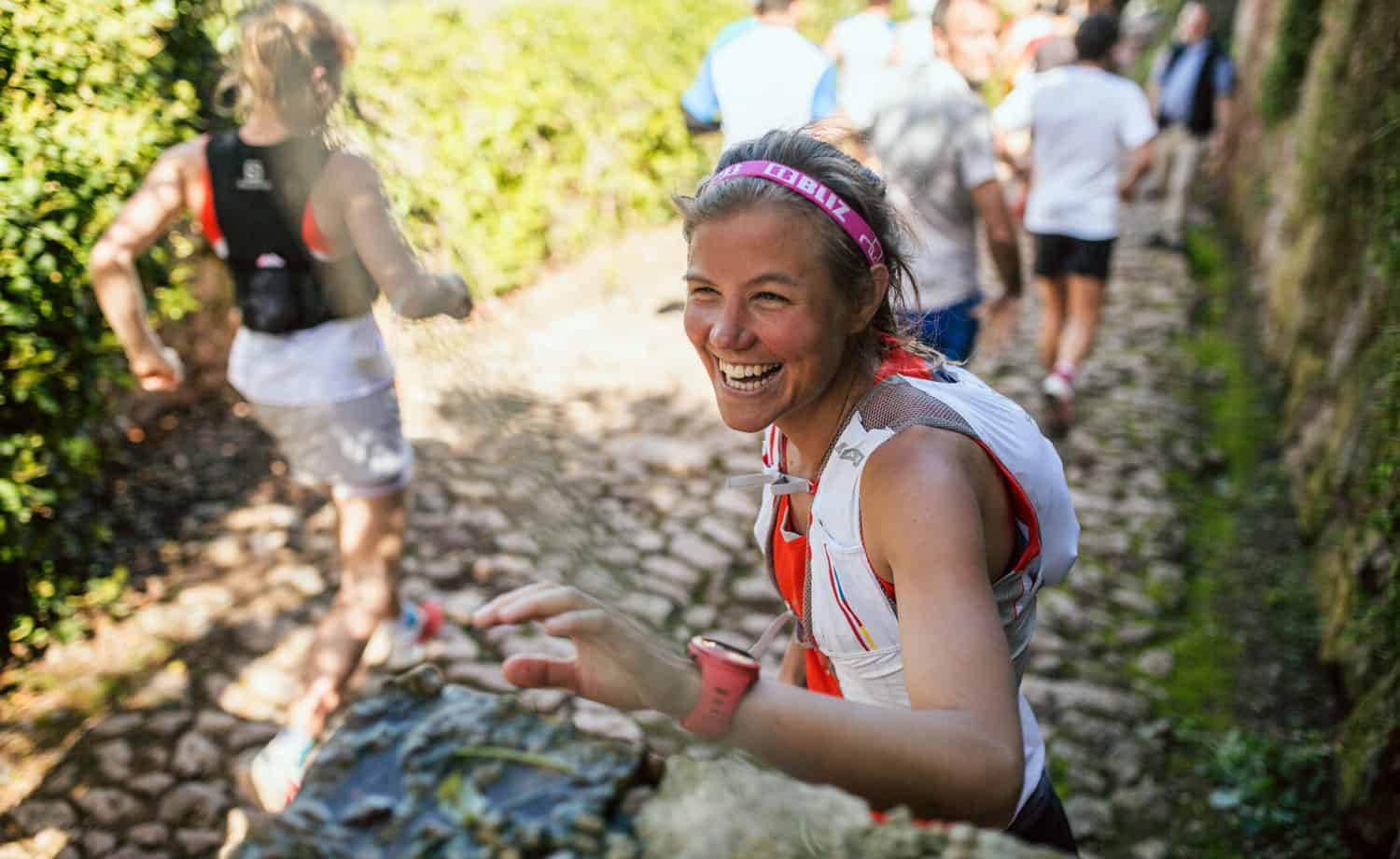 Emelie Forsberg will try to set up a new Fastest Known Time (FKT) at the King's Trail. Photo: Jordi Saragossa.

The King’s Trail is normally divided into stages. Abisko to Vakkotavare, via Kebnekaise, is 110 kilometres. From Saltoluokta to Kvikkjokk it’s 70 kilometres. Between Kvikkjokk and Jäkkvik, you’ve got 100 kilometres followed by the stretch Jäkkvik to Ammarnäs, which is 96 kilometres before you finish off with around 81 kilometres between Ammarnäs and Hemavan. The stretch Jäkkvik to Ammarnäs is often a surprise. Many claim that stretch is actually just over 80 kilometres, but then they’re talking about the shortcut across the reindeer enclosure in Biergenass. It’s original routing, along the trail past Rävfallsstugan, is nearly 100 km. That was a mistake Emelie Forsberg had made too. When she realised that she had almost 20 kilometres to go to Ammarnäs, instead of a couple of kilometres, it was tough going.
– The fourth stretch was the most difficult by far. Partly due to tough terrain. Partly due to that annoying miscalculation we’d made. I really had to dig deep to get through it.
– Thankfully several trail runners came and met me along the way. It really helped a lot, getting some positive response and realising that the village wasn’t that far away.

I ran the stretch Saltoluokta – Aktse once and that awakened my curiosity, that you can actually run in the mountains rather than walk.

So Emelie worked at the Saltoluokta Mountain Station a little over ten years ago. That’s also where she started her ‘record hunt’.
– Yes, it was so much fun finding old notes from 2007 where I’d written about the possible routes I wanted to run along the King’s Trail.
– After the mountain station, I worked in the Jämtland mountains, but the King’s Trail was in the back of my mind. I ran the stretch Saltoluokta – Aktse once and that awakened my curiosity, that you can actually run in the mountains rather than walk.

In 2012, when Emelie entered her first trail race, Zegama-Aizkorri Mendi Maratoia, she finished third. In her second trail race, The Dolomites Skyrace, she won. She started to understand that what she’d been doing on her own and for the fun of it at home in the Swedish mountains was something people actually competed in, in the Alps. She also quickly realised she was good at it. Even so, it took a couple of years before she admitted to herself that she was a successful athlete. To her, it’s always been about having fun outdoors, whether it is on skis, or running, or as the organic grower, she’s become.
– Of course, I like winning, it’s great. At the same time I know it doesn’t really matter. But being outdoors – that’s always good. 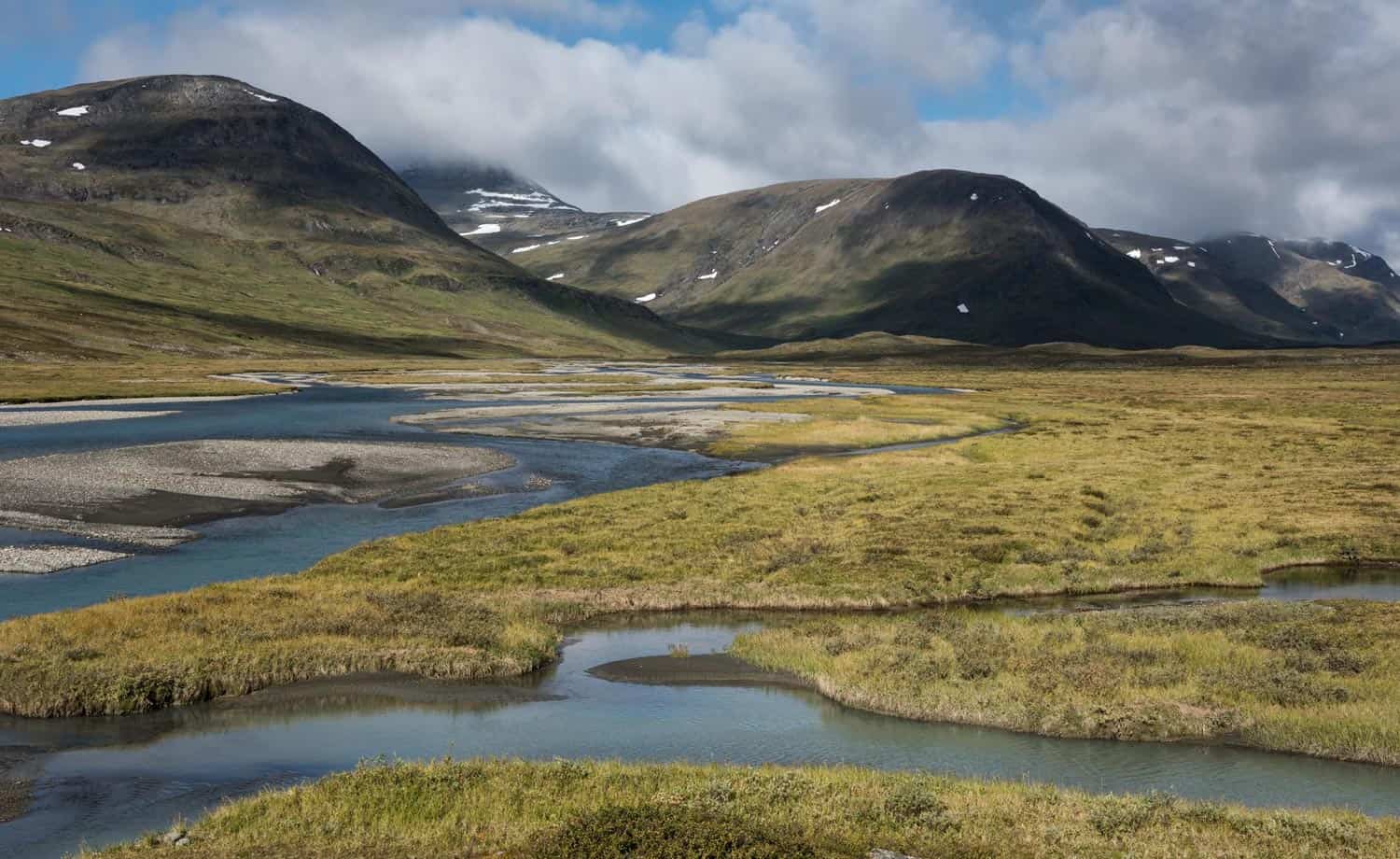 Emelie Forsberg is one of the world’s most successful trail runners. She holds the FKT (Fastest Known Time) for Grand Teton, Mont Blanc, Kebnekaise, Matterhorn, Monte Rosa and the King’s Trail, and more. Follow Emelie on Instagram.

In July, a year later, a new FKT was set on Kungsleden. Trail runner Max Själin ran the entire Kungsleden in 4 days, 14 hours and 33 minutes.

Along the King’s Trail, a lot of unexpected things happen. A rain and hail shower appears during the first day, even though no weather report in the world had predicted it. Emelie is freezing cold and is happy she doesn’t catch a cold. In Teusajaure the cabin manager is waiting with a bag of snacks, a cheerful laugh and a question about rowing the boat for her. (Emelie accepts the snacks, not the lift). In Vuonatjviken the cabin manager doesn’t want to wait with the boat shuttle, even though people call to say that Emelie is only fifteen minutes away. A timetable is a timetable, even in the mountains. Instead she has to wait for the next shuttle, but of course, she’s got time for an ice-cream. When life gives you lemons, make lemonade – it’s classic advice. Emelie Forsberg’s take on this would be: if you’re two hours late because of a boat, buy an ice-cream.

In Saltoluokta the staff invite her to a superb dinner: one of their own has returned. In Ammarnäs runners from the ‘Mountain March’ (Fjällmarschen) run towards Emelie when they hear she’s cold and is having a hard time. The fourth day is the hardest day mentally, just as she herself has predicted. Still, it’s that mental strength that makes her get up on the fifth day and on shaky legs keep running towards the goal in Hemavan.

She finishes with a time of 4 days and 21 hours. One and a half days faster than the previous FKT. Perhaps it’s time to remind herself that she certainly likes to win. Even if the most important thing is to be outside.