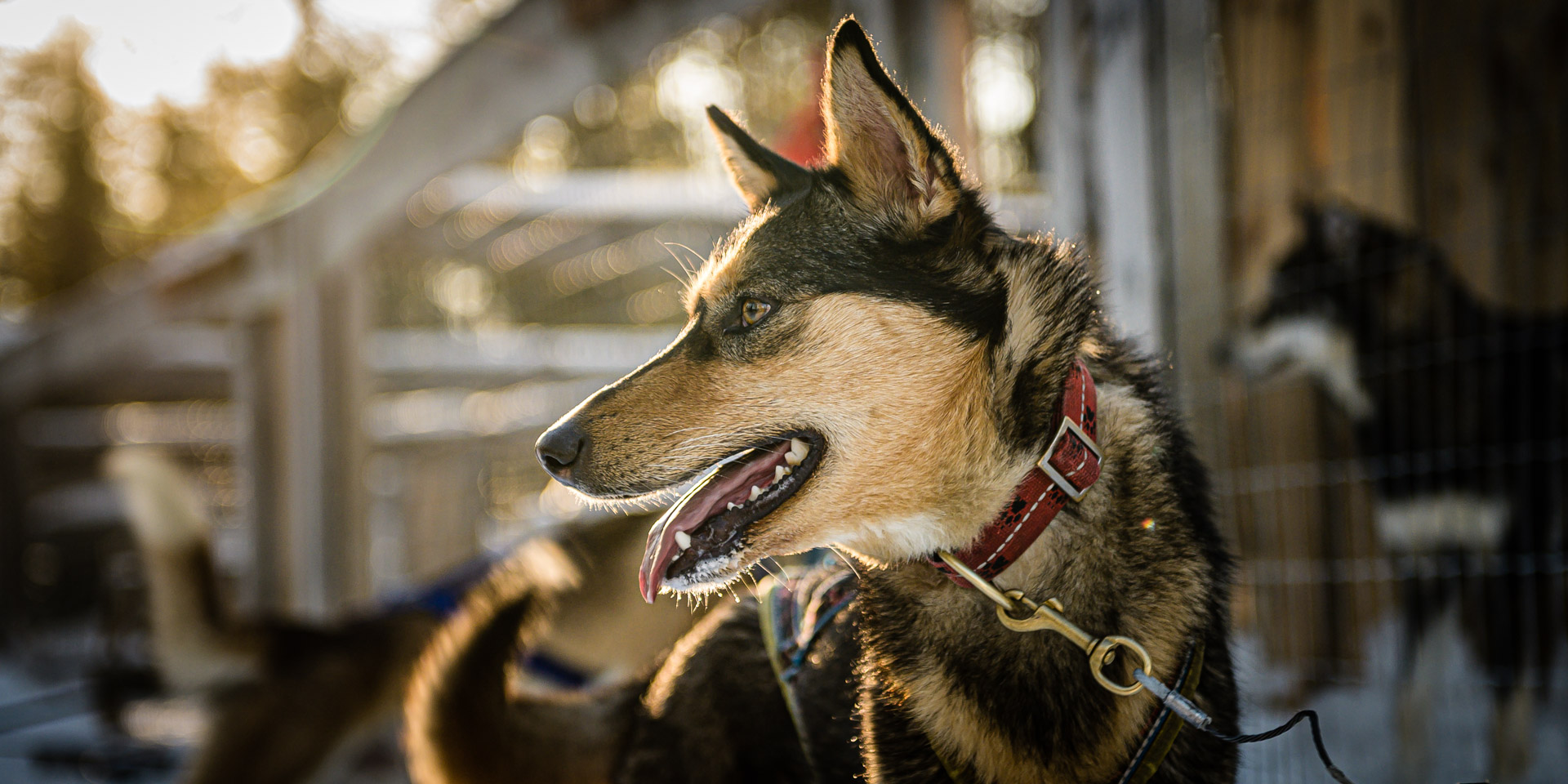 Out in the woods, beyond the end of the road in Särkimukka, lies a kennel and many magical miles of track. People from all over the world come here to experience winter and an Arctic adventure. Most of them go home a friendship richer: a four-legged friendship.

Five kilometres from where the public road ends in Kangos is where you find Pinetree Lodge in Särkimukka. Four people live there: Johan, Sara, and their two children. And one hundred ninety-six sled dogs and Cody, an Australian Shepherd who is the most affectionate dog you’ll ever meet – as long as you scratch him under his chin. 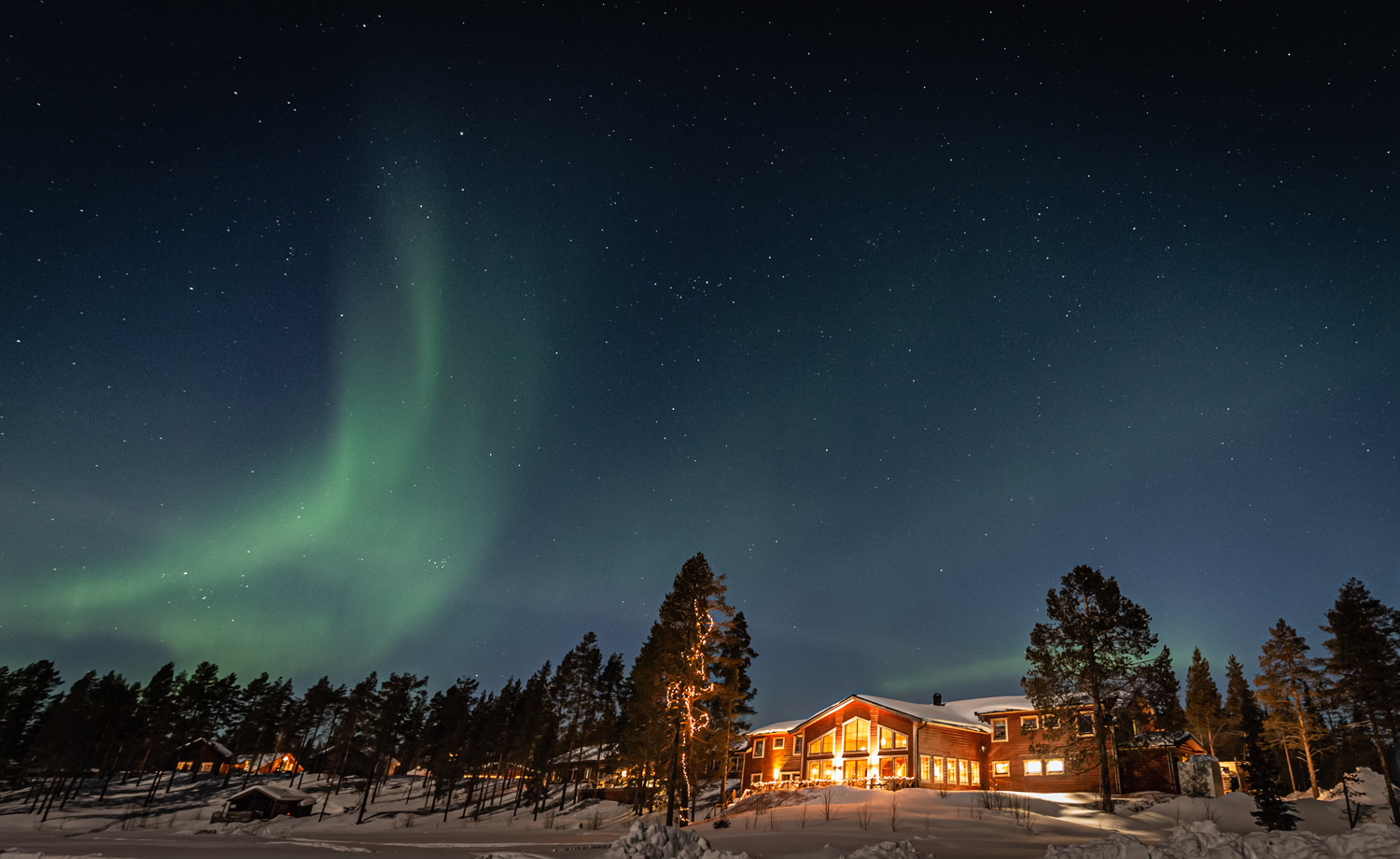 The Pine Tree Lodge at the end of the road.

Johan and Sara own and manage Explore the North. Together they own three hotels: Pinetree Lodge in Särkimukka, Arctic River Lodge in Tärendö and Aurora Mountain Lodge in Lannavara. In other words: they are busy.
– But it’s nice to see that it’s been snowing again, says Johan and laughs. Gives me something to do.
– You know, Sara is in charge of logistics and all the sale-related things, I’m more in charge of daily business.
– This far into the season the routines are in place, and the staff knows what to do, so there’s not as much to manage. It doesn’t really suit me anyway, so it’s good that it’s been snowing; then I get to drive the tractor. 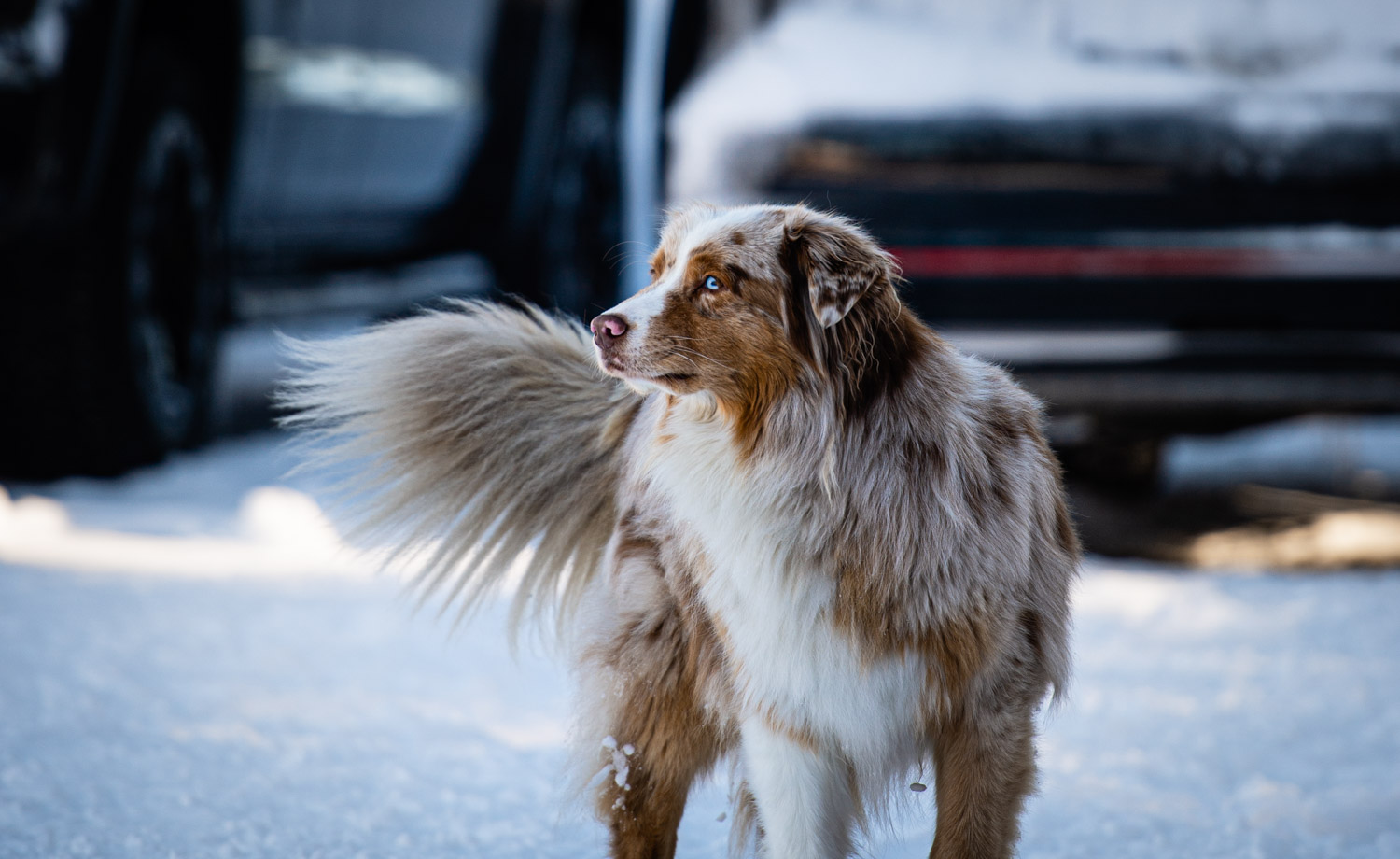 Cody, an Australian Shepherd in the Arctic. 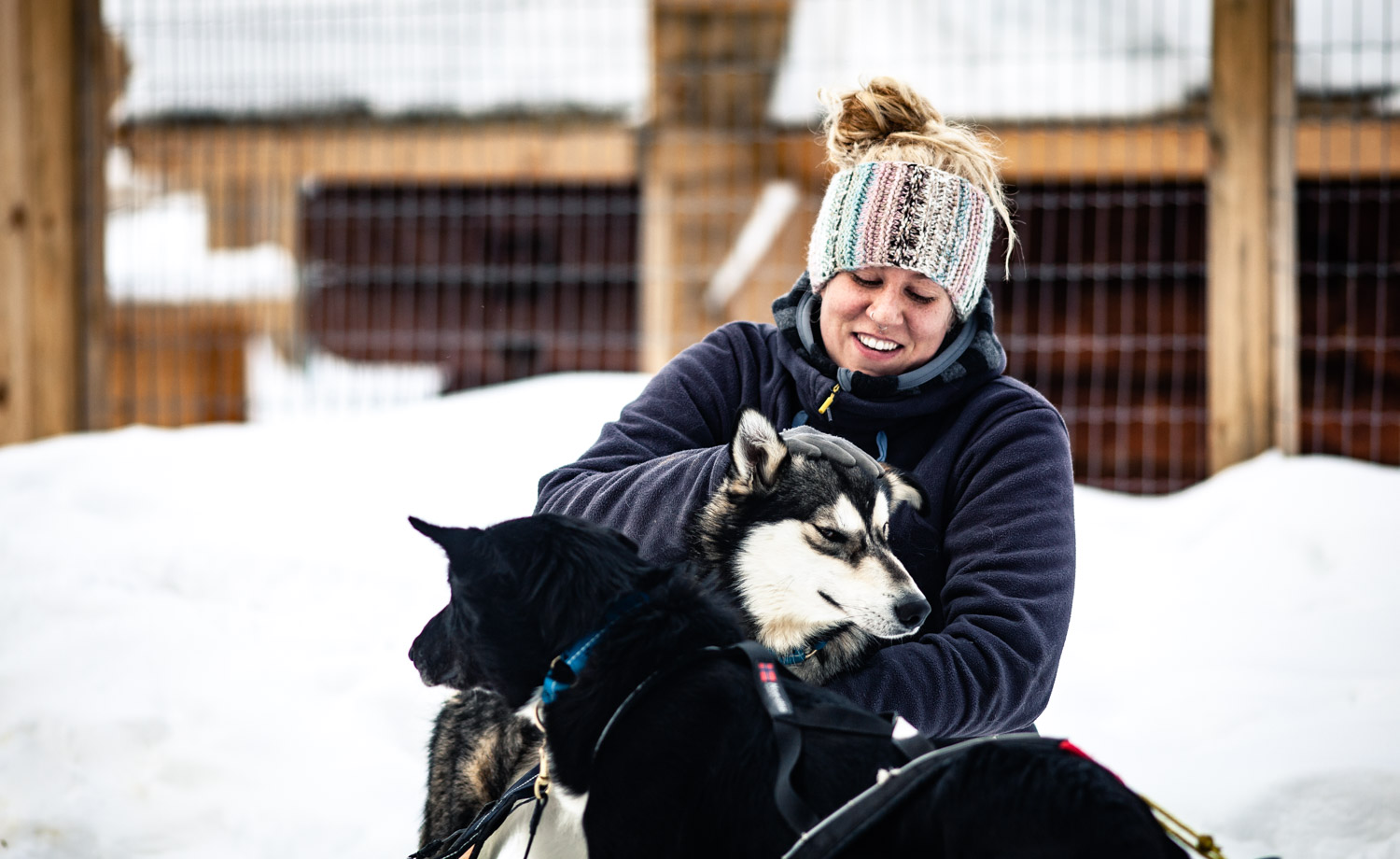 Johan Väisänen isn’t used to sitting still. With three hotels, an Arctic winter around the corner, some hundred guests every week and even more dogs in the kennel, there’s no real chance of that anyway. But just to be on the safe side, he’s decided to start doing dog-sled competitions as well. He’s just returned home from the Finnmarksløpet race in Norway, where he and his dogs travelled 500 kilometres in the snow and cold. The dog-sledding investment is long-term. Developing the right material – excuse the expression – is essential. At some point, he’d like to do the entire length of the Finnmarksløpet: 1,200 kilometres. Of course, there’s also the dream of Iditarod. Especially for someone like Johan who comes from Kangos, the birthplace of the legendary Leonard Seppala.

Dogs and dog sledding have always been a considerable part of Johan’s life. He lived with a friend in a hut in Alaska for a year. The dog-sled team was a way of surviving there, the means to move along the trap line, from one problem to the next. These days the dogs take people into the forests of Swedish Lapland, away from everyday problems and worries.
– Alaska taught me a lot. Mostly I learnt how much dogs can really teach you about who you are. 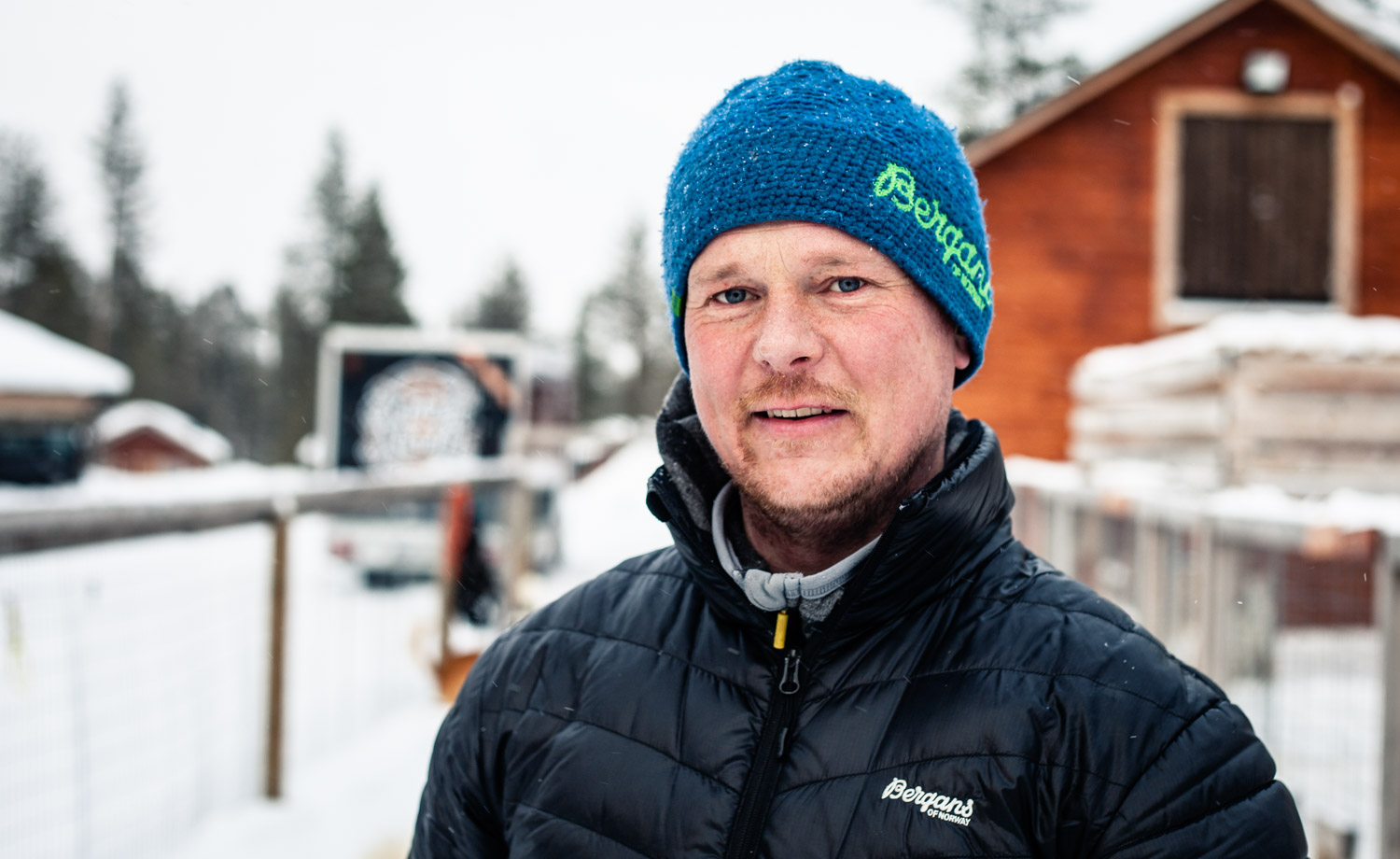 To Sara Ljunggren it wasn’t always obvious that she’d end up in Särkimukka. She met Johan at the guide training program in Dals-Ed. They then moved to Sälen where they worked for a couple of years before they decided to start their own business in the Torne Valley. In the beginning, it was pure dog-sledding trips they worked with, in and around Särkimukka. But then they got the idea to build their own accommodation, an idea that turned into Pinetree Lodge. The journey hasn’t always been easy. Try getting a loan for hotel construction in the middle of a pine forest, five kilometres beyond the sign “Public Road Ends Here”, see how easy it is. Johan says:
– We were granted a loan from the bank under one specific condition: that we’d build the lodge in modules that could be moved. That way, if we couldn’t get the business to work, at least the bank would be able to get the house out of the forest.

But they made it work. The facilities in Särkimukka have been expanded in various stages, just like the entire business. First, they sorted out Aurora Mountain Lodge in Lannavara, and during winter 2018/2019 the Arctic River Lodge in Tärendö was finished as well. It’s the old Forest Hotel that’s had a significant facelift, and it was an instant success. During 13 weeks during the season, Sara and Johan welcome their own charter flights from Brussels. The flights land on the Finnish side of Lapland and then people end up at one of the three hotels they manage.
– People check in two days per week: Sundays and Thursdays, so you have to be prepared. Make sure the sales work and that the rooms are filled, says Sara. 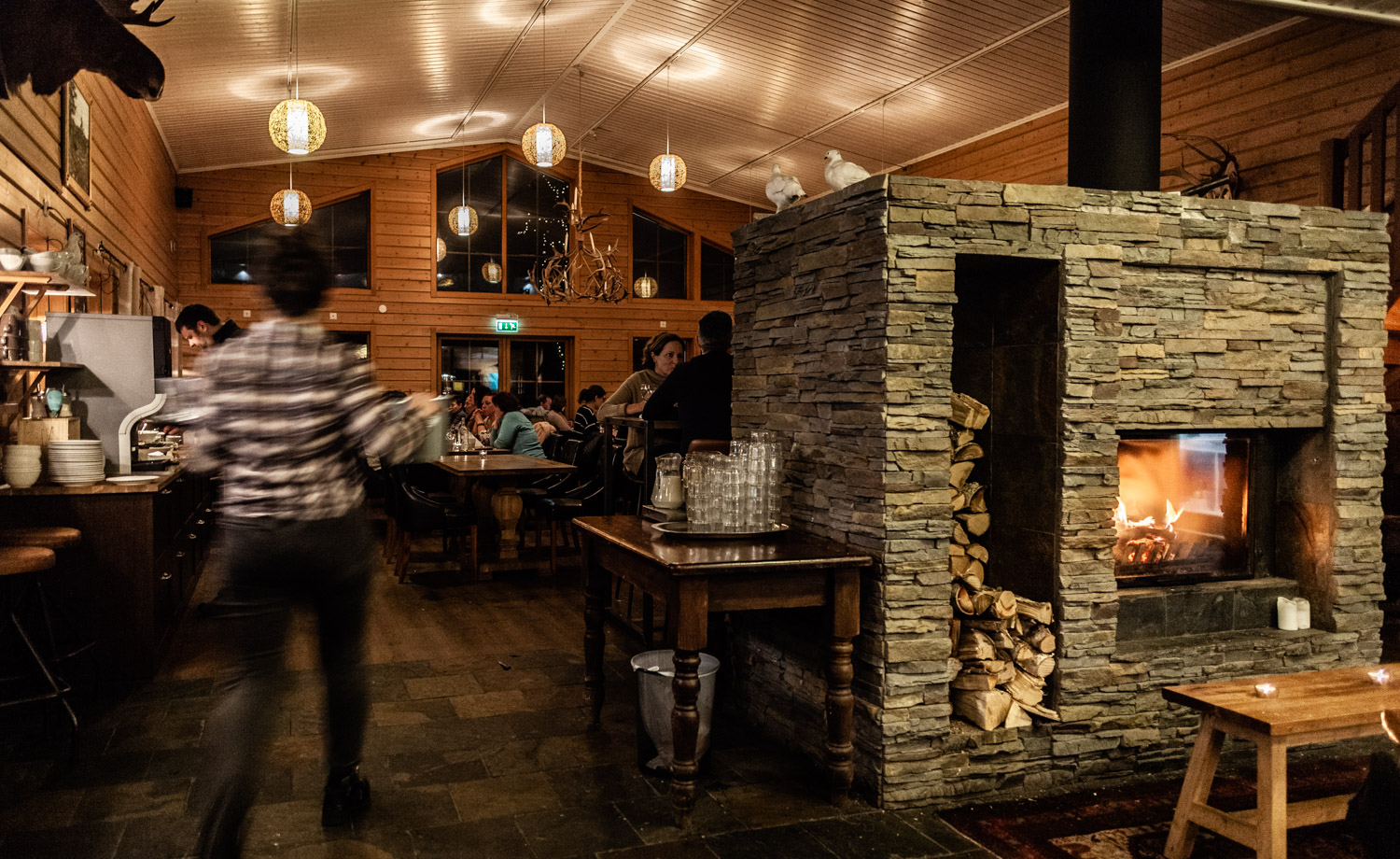 The facilities in Särkimukka. 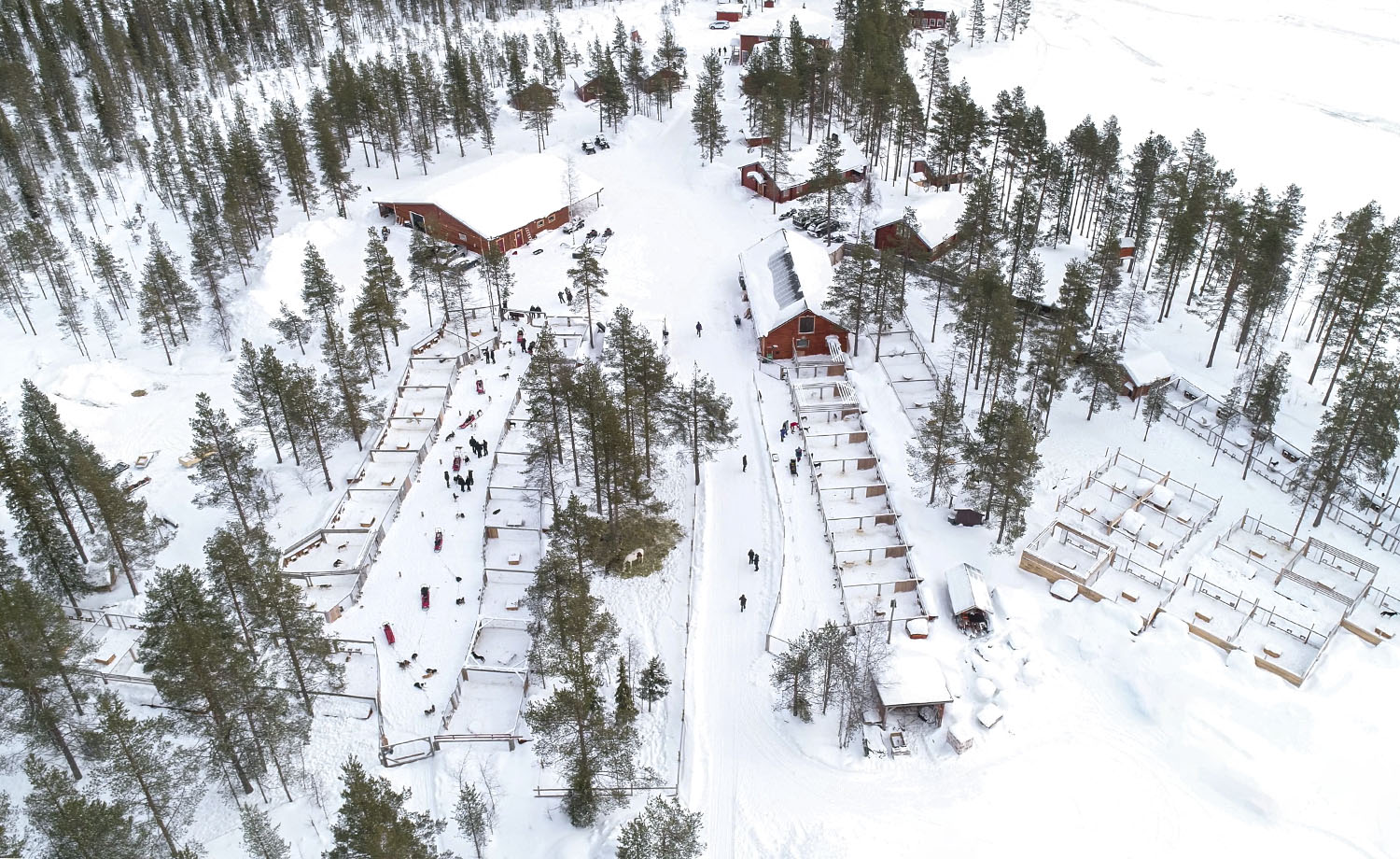 Särkimukka is home to 4 people and nearly 200 huskies.

A different kind of school bus

Today Johan is taking some of the dogs from the competition team out on one of the basic tracks. They ran 500 kilometres just a couple of days ago, but don’t seem that affected by it. Johan’s daughter Tilda is also going to mush a team. She puts harnesses on some of the dogs and is ready to go as her dad lifts the anchor. They go running through the forest.
– Sometimes mum and dad pick me up from school with a team of dogs. The other kids at school think it’s a bit strange.
– But to us, that’s life.

Tilda is counting down the years until she gets to compete. It’s five years left. Then she can start mushing for real. Five years can be an eternity when you’re young. Every now and then she applies the break to her team, gives her dad Johan a bit of extra space in front, then releases the brake to let the dogs run at full speed. Through the pine forest, across marshes and lakes, up and along old forest roads and cleared boundary lines. She travels at a good speed and the ear flaps of Tilda’s leather hat flutter in the wind. It must be something, having access to several hundred kilometres’ worths of track for the dogs to go running along when you’re young and dreaming of a dog team of your own. 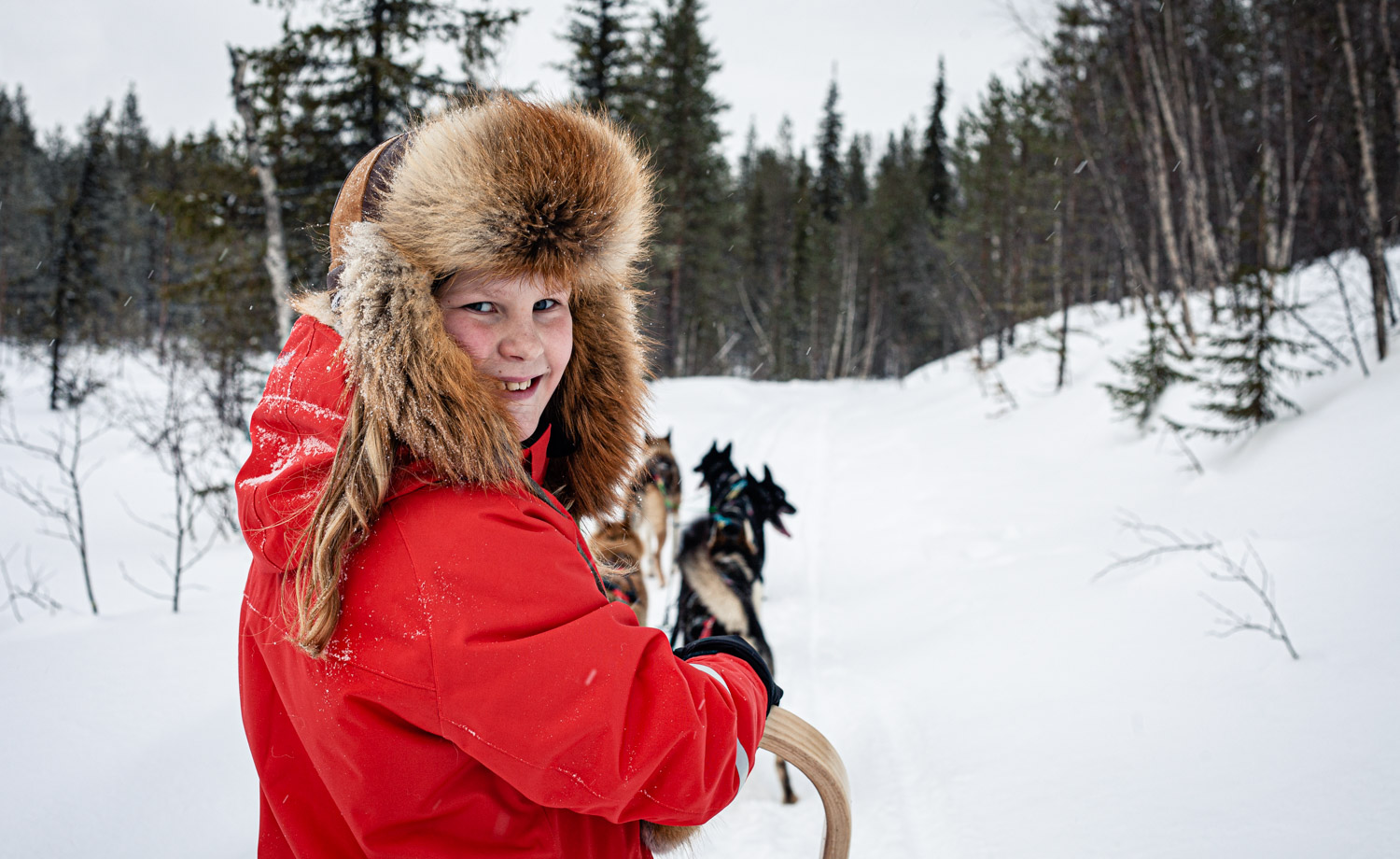 Tilda has been mushing all her life.

A whole lot of huskies

The fact that Johan and Sara have this many dogs is due to a number of things. Out of the 197 dogs around 145 are still running, others are puppies busy growing, or retired dogs that still have a special place in their hearts. Their business is based on activities around dog sledding. They don’t just offer short trips in the morning and afternoon; they also have entire programs with simpler day trips or week-long trips. Here in Särkimukka, they offer three-day tours for visitors every week during the season. The guests can go out and spend the night in different overnight huts that Johan and Sara have available in the forest.
– We have some various huts and camps in the woods that we use for the multi-day tours.
– When guests go on multi-day trips, the dogs leave as well. That’s why we need that many dogs. At the same time, as people are out doing multi-day trips, we have to be able to run the usual day tours here at the lodge. 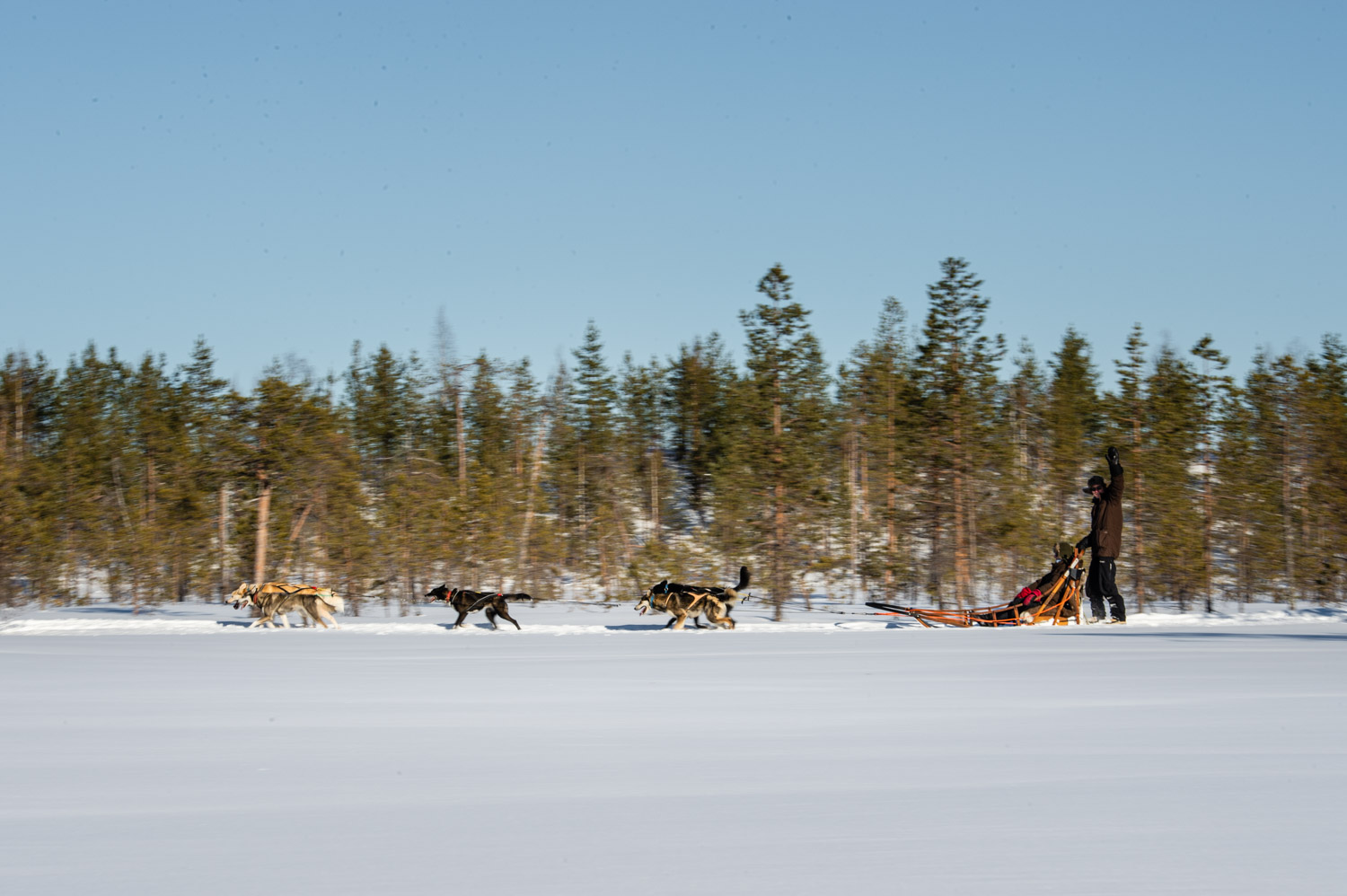 The guests can go out and spend the night in different overnight huts.

Pinetree Lodge is situated by a lake in the middle of the forest in the village of Särkimukka, five kilometres from wehre the public road ends in Kangos. To learn more about Pinetree Lodge go to explorethenorth.se.

Johan and Sara started this business, beyond where the road ends and where the bank didn’t really want to grant a loan, several years ago. They wanted to offer a really good dog-sledding experience in the kind of nature they’ve both come to love. They still do the same thing, even if the business is so much bigger than it used to be. The dogs are the centre of their lives, in every way.
– During a three-day tour, you become friends with all the dogs on the team. But some dogs will be that little bit special. Often we see how guests don’t care about the fact that they are leaving our lodge and their travelling companions, returning to their own part of Europe and their everyday life, instead, we find them on their knees in the kennel talking about life with their newly-found, four-legged friend, Johan tells us.
– That’s just beautiful.