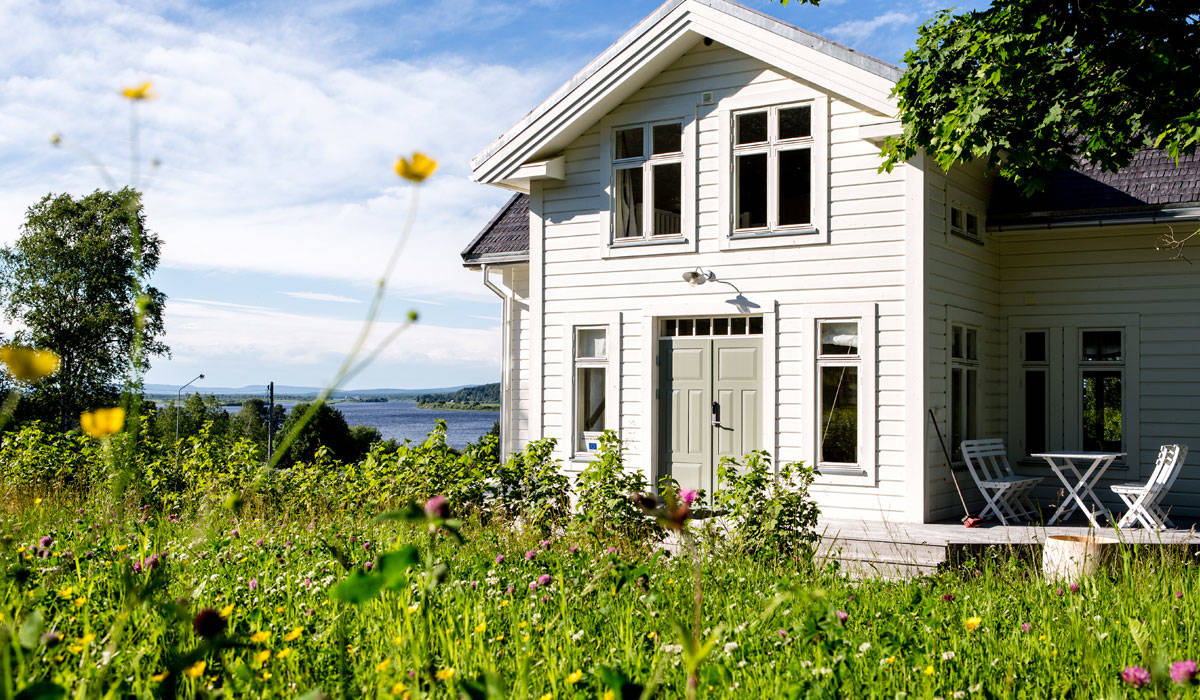 Imagine spending your vacation in the tranquillity of a small village overlooking the free flowing Torne River. At Arthotel Tornedalen you get exactly that together with a large portion of unique culture and scenery that will make you come back for seconds.

Arthotel Tornedalen is one of these ideas that just kind of get a life of their own. It all started when Gunhild Stensmyr, the owner and also born in the area, found a house in very poor state for sale in Vitsaneimi/Risudden.

It also means that your breakfast bread will be baked by one of your neighbours. That’s about how local and genuine as it gets.

But the location looking over Torne River gave a taste of the potential.

Gunhild herself was about to make a move back to where she grew up and took on the project of carefully renovating the old estate. A few years on – there are now three tastefully renovated buildings true to their heritage located right in the village Vitsaneimi/Risudden in Torne River Valley.

If you take a walk along the road you’re most likely to say hello to the locals instead of other visitors. It also means that your breakfast bread will be baked by one of your neighbours. That’s about local and genuine as it gets.

Green, green and a bit of blue

The location of Torne River Valley is just around the Arctic Circle. Your instinct might tell you that it’s not an ideal summer location, but if you dare to take a leap of faith you’ll be greatly rewarded.

Thanks to the Gulf Stream of the Atlantic summers here are really warm. And Torne River Valley also have a micro climate due to the shallow river that makes this area great for farming – which means that you’re very likely to be served local veggies for dinner.

The landscape explodes in green during summer, and through the greenery cuts the Torne River with clear water and plenty of activities and treats for any keen on fishing.

There is also plenty of culture to explore in the area since the only thing literally separating Sweden from Finland in this area is the river. Shared history and culture across the borders have always been a way of life here. 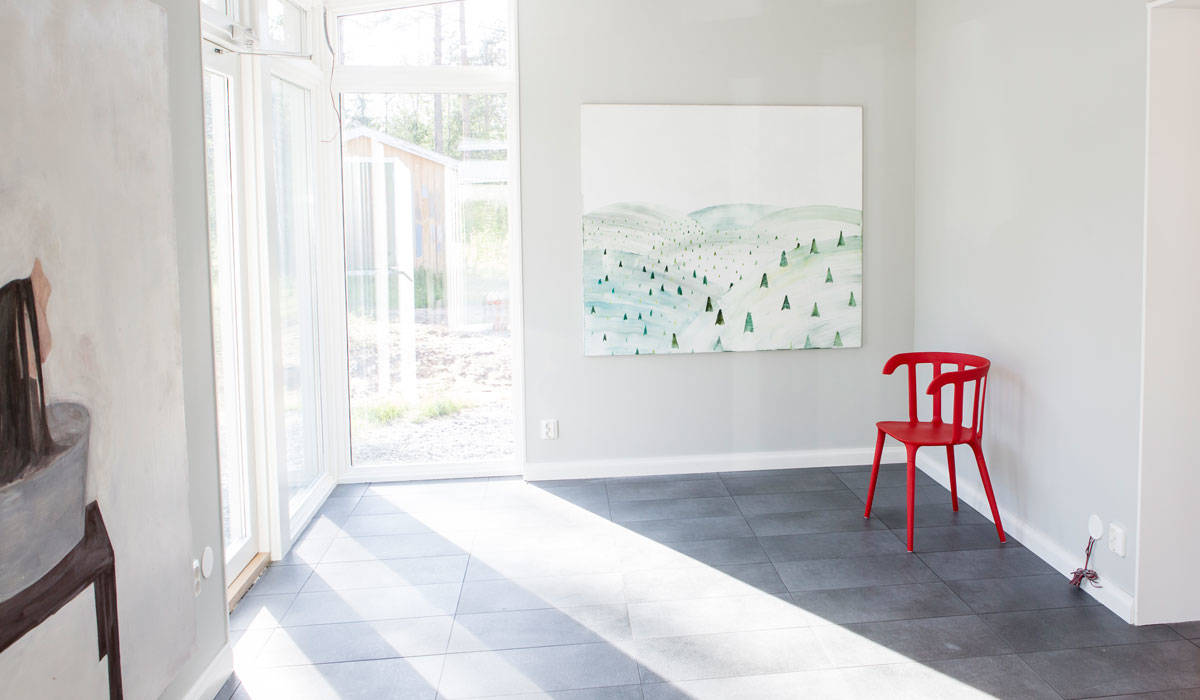 In Wennberg House, you are welcomed in the hallway by Marcus Eeks painting Winter (2002). 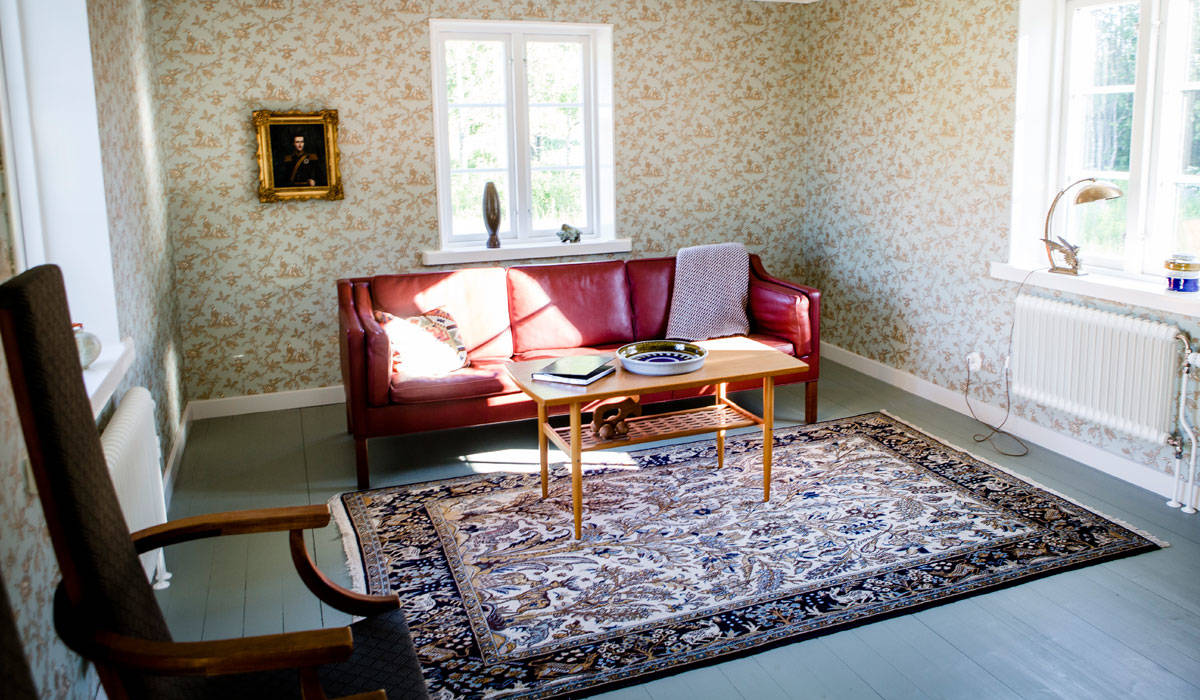 Even though the houses are completely refurbished they have a homey and personal atmosphere.

The Tolonen House has a breath-taking view overlooking Torne River. 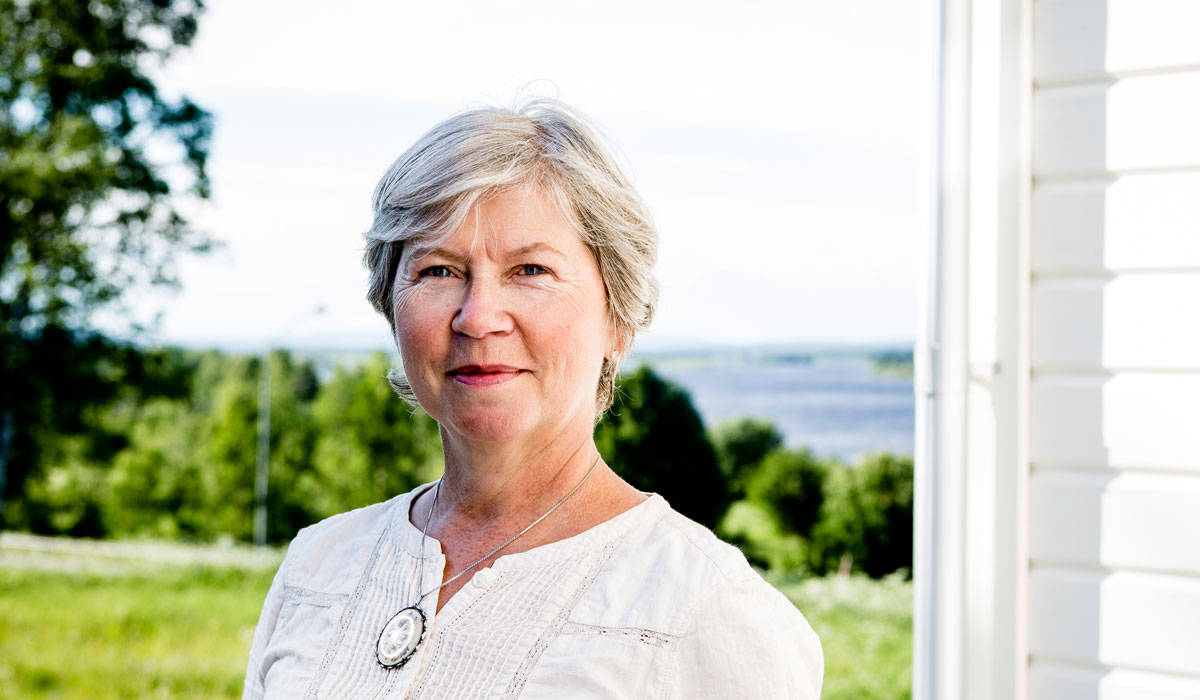 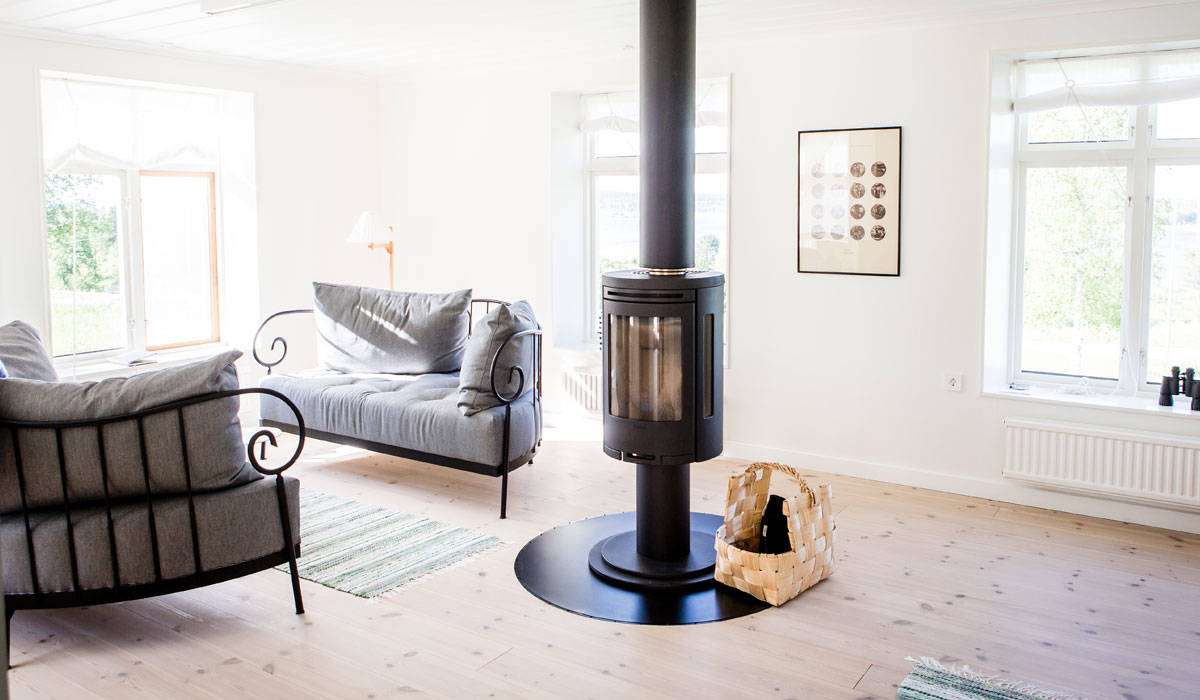 All the interiors of Guest House Tornedalen are light and airy. The Tolonen House also has a fireplace where you can cosy up after an eventful day. Photo: Gunhild Stensmyr. 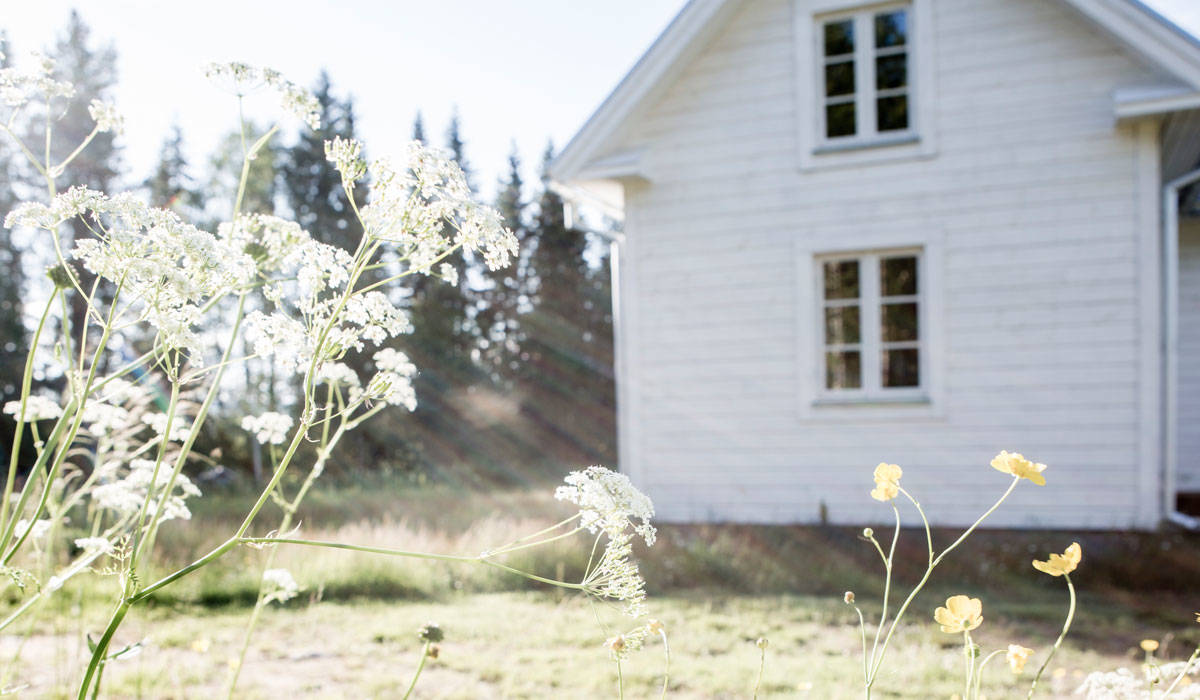 The Anundi House is secluded in the northern part of the village Vitsaniemi close to the forest and the mountain Pakkasenvaara. 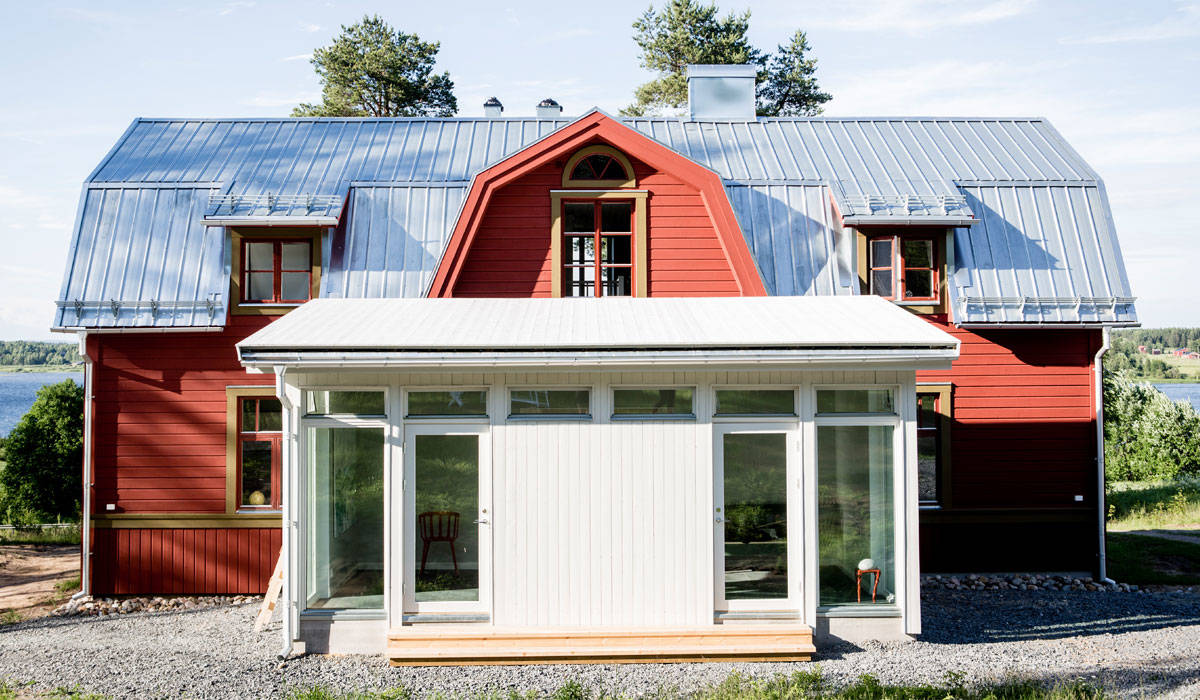 The Wennberg House has two doubles and two singles with private bath and space for twelve people in the dining room.

Rest your eyes and ears under the midnight sun

So what sets Arthotel Tornedalen apart except for the location? As mentioned, it is carefully renovated traditional houses that now hosts comfortable beds with or without board to their guests.

Secluded and private but in the heart of a village. The standard is high and the décor is spacious and airy with plenty of room for your personality. Gunhild has also added some extra love to the interior by letting each house serve as a display for her private art collection.

The houses themselves also carry their own stories – the first one to be finished was the house Tolonen, named after the family that used to live there. It has a private sauna next to the house – and in this area it’s pretty much mandatory to finish any good day in the sauna.

Two more houses are also available, both with their individual character, namned after families Anundi and Wennberg.

But to be frank, it’s still the location that makes this place special. The quiet summer nights in the village. The gentle, never-ending flow of water in the river. And the hundred days without night under the midnight sun.

Places to visit in the area

Kukkolaforsen
Great local food, traditional net-fishing and cultural village where it’s all about the whitefish. Also the location for the Swedish Sauna Academy and a chance for you to really soak yourself in the sauna culture.

Hulkoffgården
A mandatory stop for any meatlover. With their own Charolais cattle and herb garden they serve up dreams on a plate with lovely personal service.

The Archipelago
Head to the coast and discover part of the world’s largest brackish water archipelago. Tour boats are available during summer.