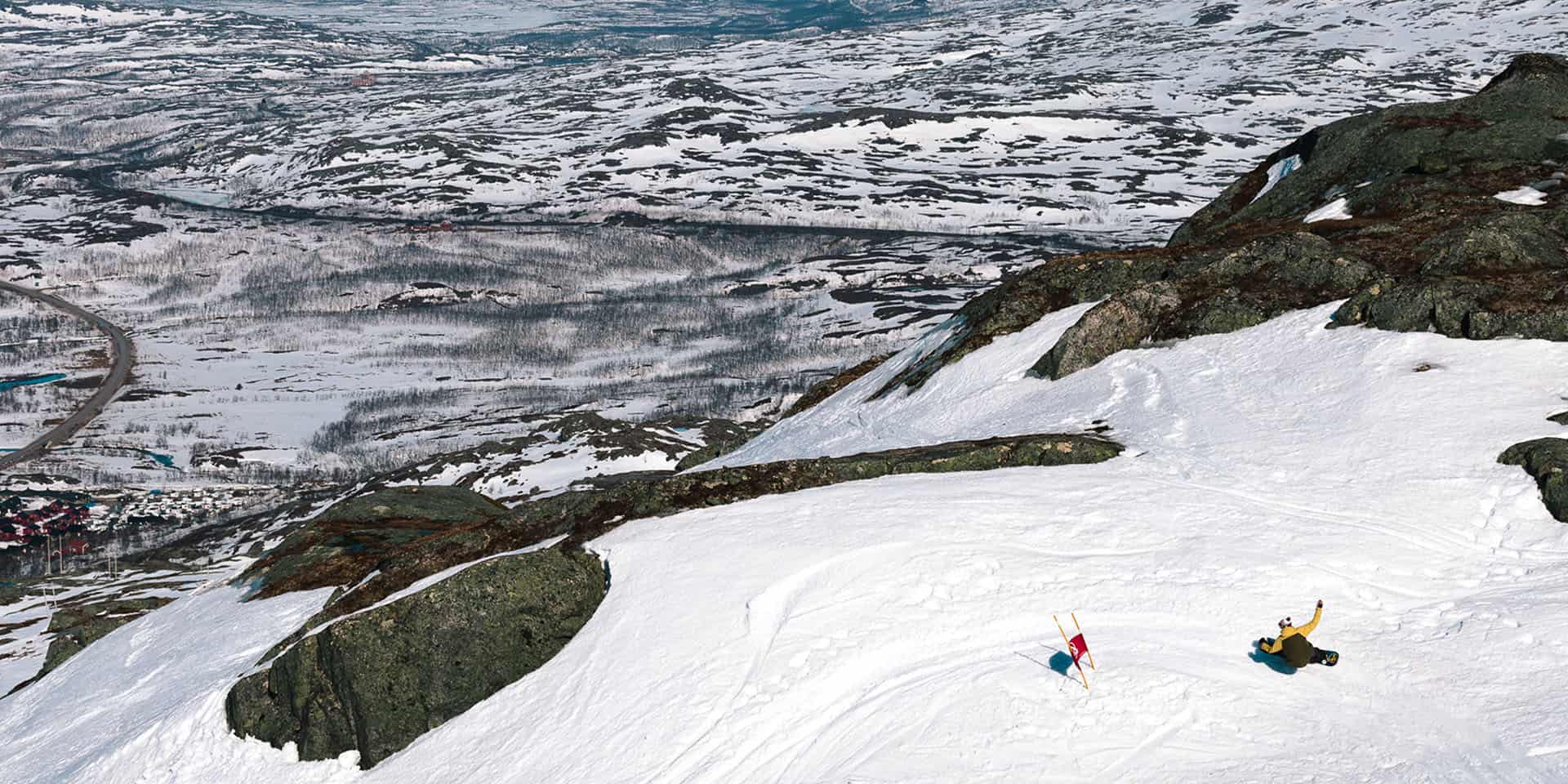 It’s all about turning. No jumps, no flips, no rails. Just the beautiful art of being able to turn on a snowboard. But apart from that Riks Banked Slalom is just a great happening in May.

Riks Banked Slalom opened in 2012. It started as a prank, like legendary Banked Slalom in Mount Baker, and has grown into one of the finest closing parties above the Arctic Circle. It’s well known that Riksgränsen in Swedish Lapland is legendary snowboard terrain. The best skiers in the world have always come here to finish off the season. 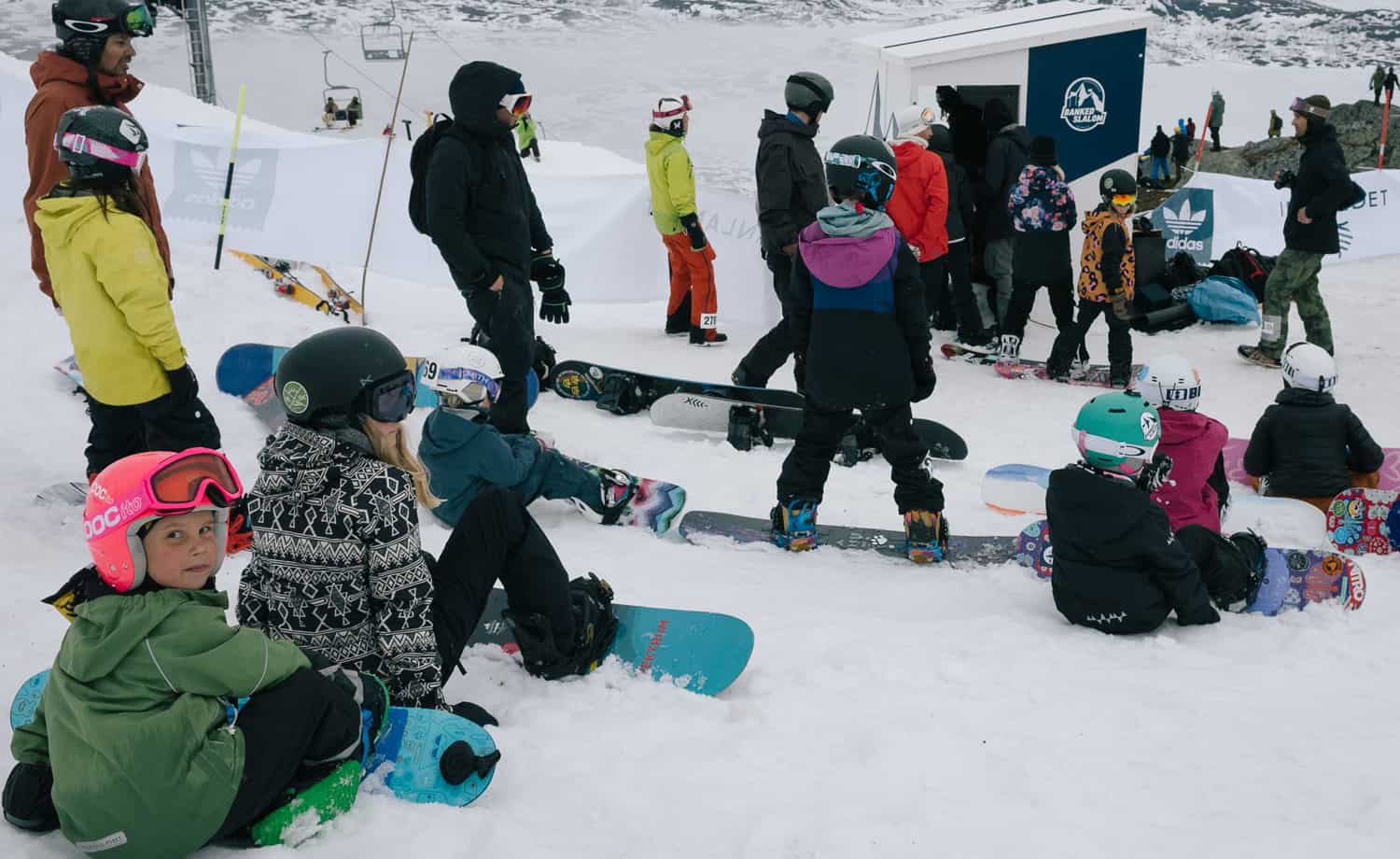 Riksgränsen’s competition King of the Hill prompted a massive international response when Ingemar Backman pulled off an eight-meter-high backside air and ended up on the covers of all the magazines in the snowboard world almost 30 years ago. That jump didn’t just grant Ingemar instant cult status and professional career, photographers and filmmakers who were there to capture the jump also made a career out of it, such as Calle Eriksson and Pierre Wikberg among others. But Riksgränsen’s strongest feature has always been the entire mountain. Not just a single jump or track – the whole terrain is perfect for snowboarding. The marketing manager at the hotel at the time, Robert Gustavsson, understood this. At a time when many resorts were actually discussing whether to prohibit snowboarding from their facilities, all the great snowboarding stars at the time had a standing invitation to Riksgränsen. And they came. So did their fans. Hanging out with Terje Håkonsen, Ingemar Backman or Craig Kelly at Gränsen was basically like hanging out with Stenmark and Thöni in their days. The American snowboarding icon Craig Kelly put the location on the map for an entire generation of snowboarders, in a way, then the rest came. 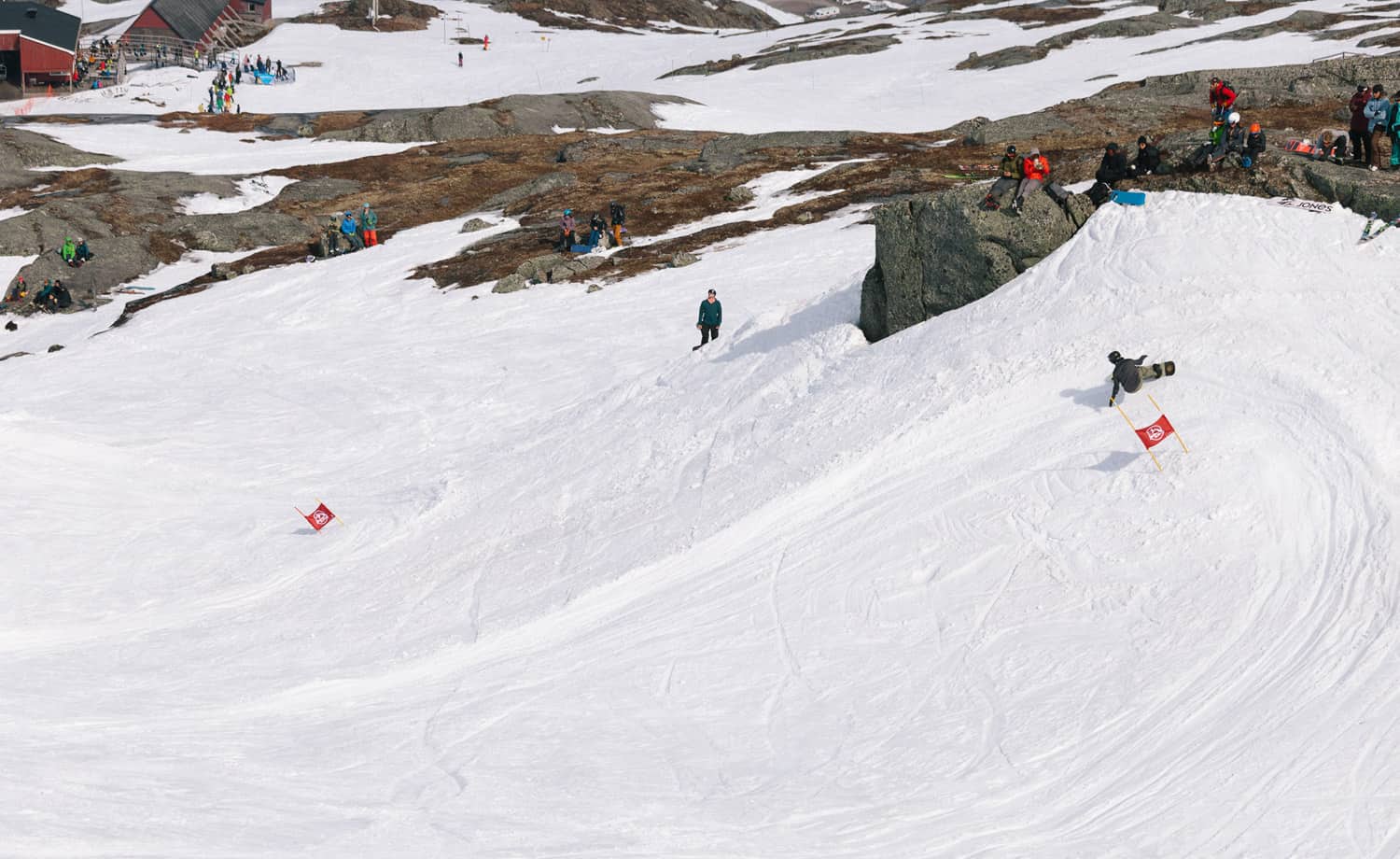 It was Anders Neuman, the editor at Transition Magazine, who came up with the idea of Riks Banked Slalom. The concept already existed, as mentioned, in many other places in the world. The most famous Banked Slalom competition in the world is that in Mount Baker, USA. It’s also called Legendary Banked Slalom and has been running since 1985. The competition was created by board builder Tom Sims, among others. Apart from making his own boards he also won the first event. Famous snowboarders like Craig Kelly, Terje Håkonsen, Shaun Palmer, Maëlle Ricker, Xavier de la Rue, Victoria Jealouse and many others have entered the Legendary Banked Slalom and won. Being able to turn has always been an important part of snowboarding. Just being able to get down the mountain. But sometimes this has been put in the shadows by jumps and tricks and rails.
– When we started Riks Banked Slalom 60 people entered. Now there are several hundred, says Anders Neuman when we have a chat.
– These days skiers from other countries participate as well. Ages range from, like, nine-year-olds to OAPs. Also, out of 300 contestants, 120 were girls. That’s pretty cool.
– The first snowboarders are becoming grandparents, says Neuman and smiles. They want their kids and grandkids to love riding just like they did themselves back in the day. 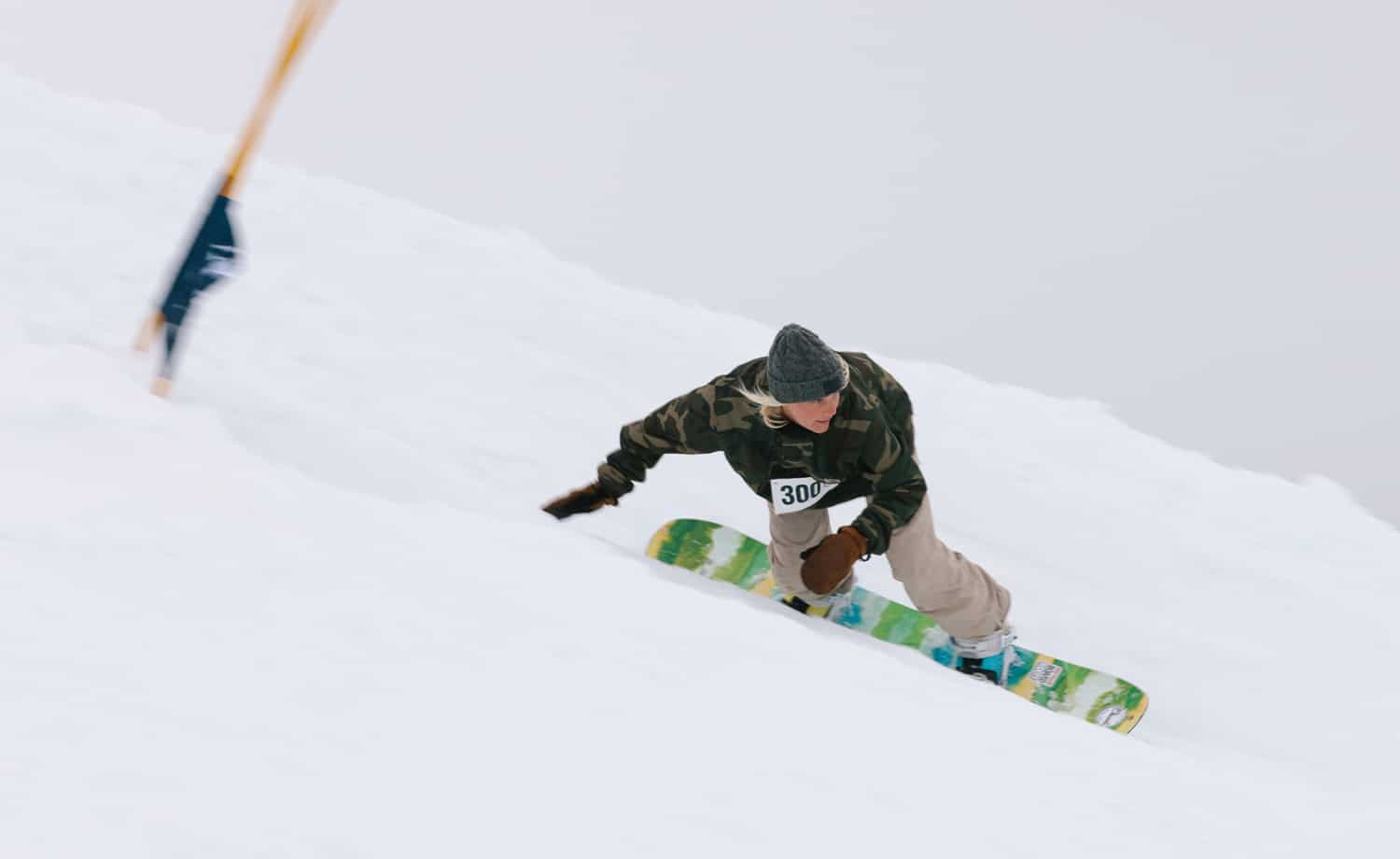 The competition Riks Banked Slalom became an instant success when it started. Sixty people registered in the first year and now there are nearer 300 participants. One thing to keep in mind, though, is that this is a party. Grandpa and grandma bring their grandkids, father and son, mother and daughter, partners and friends, everything to bring the vibe of excellent boarding to as many as possible. People do show up as well.
– Yes, but no wonder, filmmaker Pierre Wikberg adds, it’s the best snowboard event in all of northern Europe. 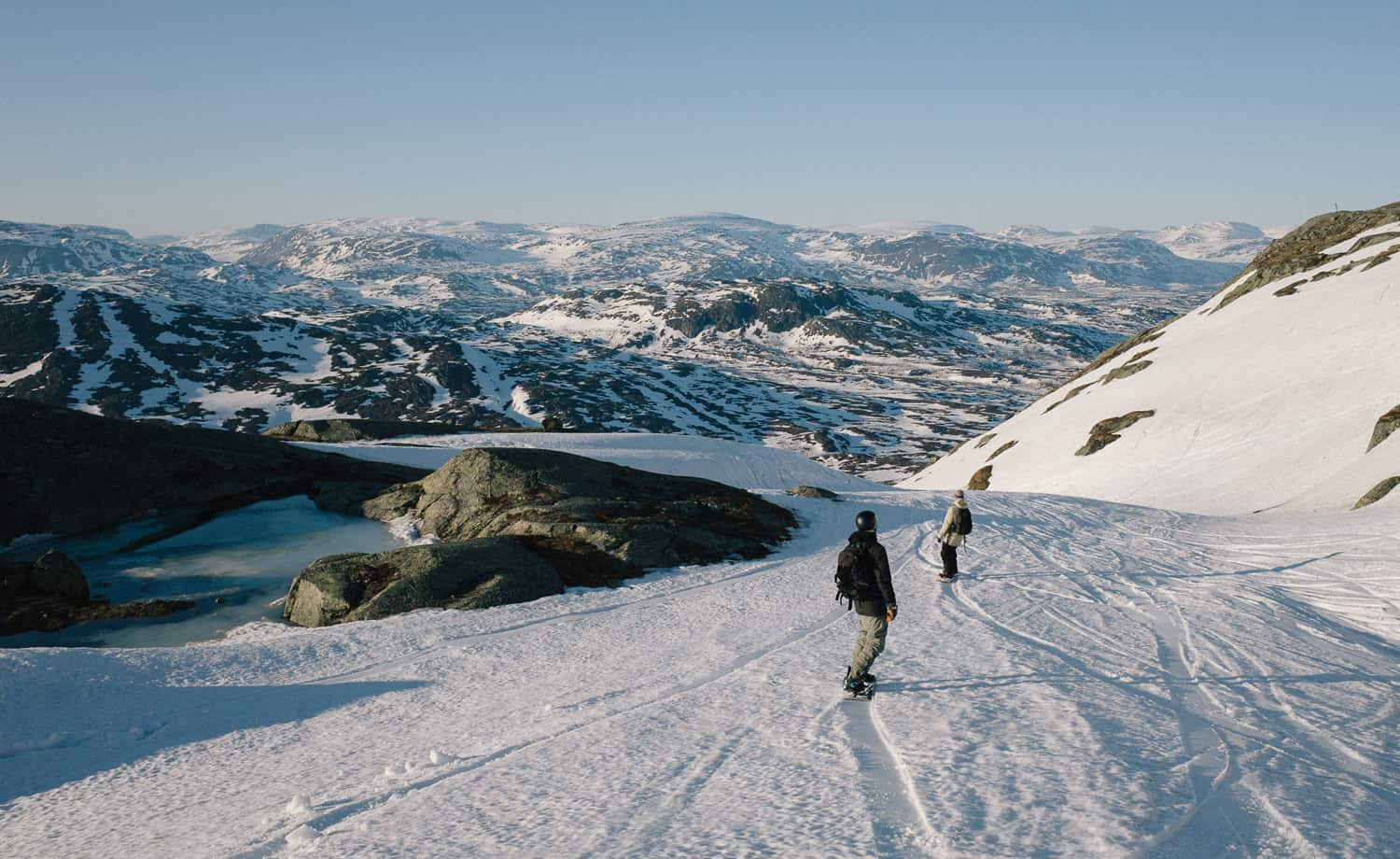 Norwegian Terje Håkonsen has won the competition in Mount Baker several times, and he’s won Riks Banked three times straight. Terje is probably the greatest snowboarder of all time, even if that kind of claim can be discussed forever, of course. What no one can take away from Terje is his drive to be the best. To compete, and to win. He’s also got that great feeling for snow. To ride, to turn, just to be there on the snow. A couple of years ago, at Riks Banked in May 2017, he was on the starting line wearing a pair of new goggles he was testing. He’d just received them and had forgotten to remove the protective film from the glass. Ordinary people would have had a hard time going downhill without being able to see much through the glasses. Terje, he won. Terje Håkonsen’s feeling for snow is unbeatable. He says:
– I probably come up to Riksgränsen just because it’s Riks. The competition is fun, of course, I like competing. But Riks is even more fun for me.
– It’s easy to fly up from Oslo, and there’s lots of good terrains, slushy snow and a whole bunch of old acquaintances. 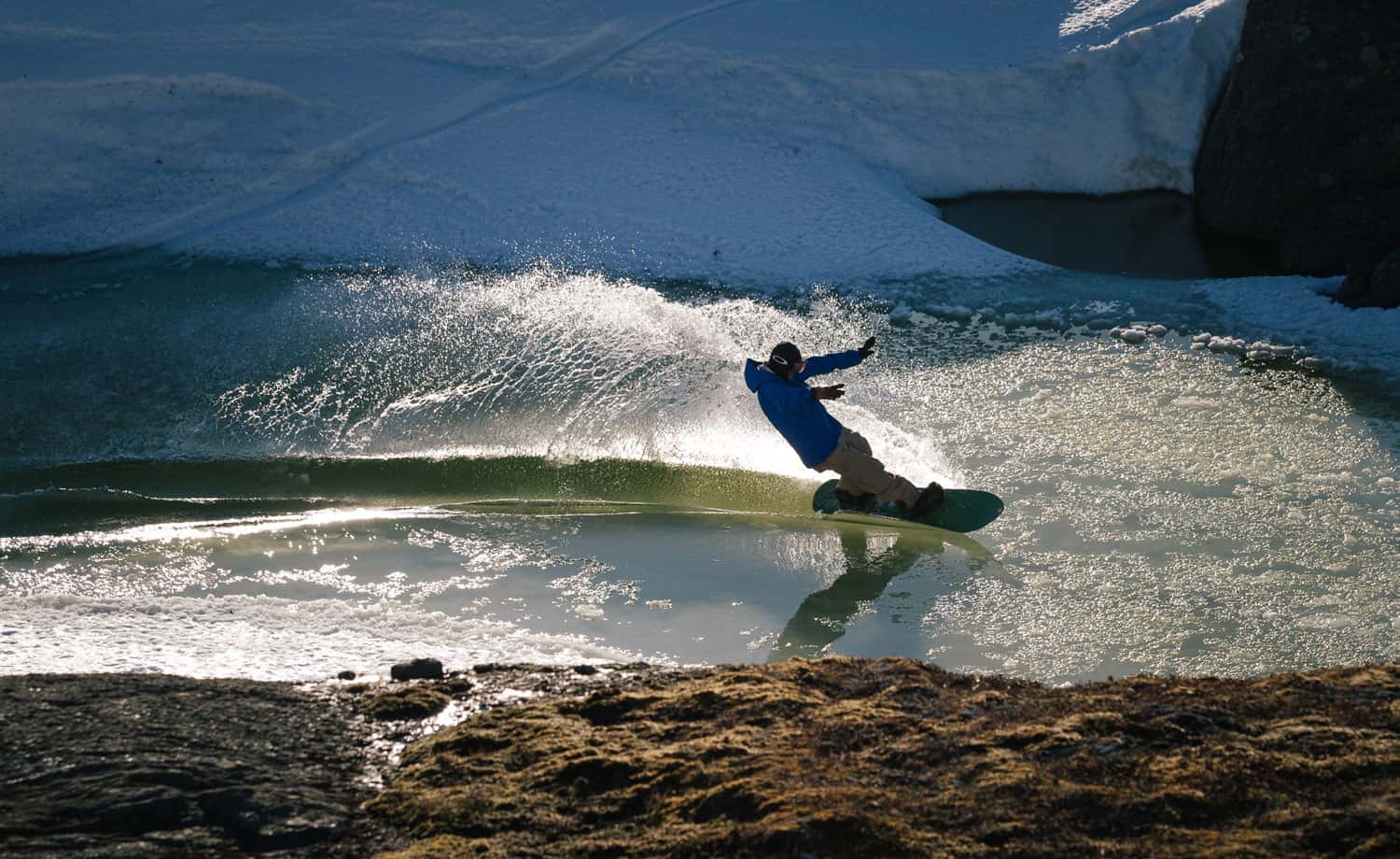 The perfect end to the season

Just like everything else to do with Riksgränsen, Riks Banked Slalom, is also about the weather. This is what you could call the outer limits, what is first and most affected by the powers of nature. Riksgränsen is like Iceland in that sense; it doesn’t get weather at all – just samples. One minute there’s a snowstorm outside: hard work for the track team, but a party as far as everyone else is concerned. Next, the sun re-appears, and the mountainside is bathed in its warming rays. The party can continue outside.
– It’s fun to see that there’s a bit of a ‘competition vibe’ going on because it is a race, but at the same time you can tell from young and old that it’s mostly a party, Anders Neuman says.
– It’s the perfect way to end the season, together with the others, family, friends, new and old stars.
– A couple of hundred snowboarders going down the Norgesvängen together is a powerful sight.

All you really have to do is to love your own turns and dare to make them bigger. That’s what all the others are there for as well.