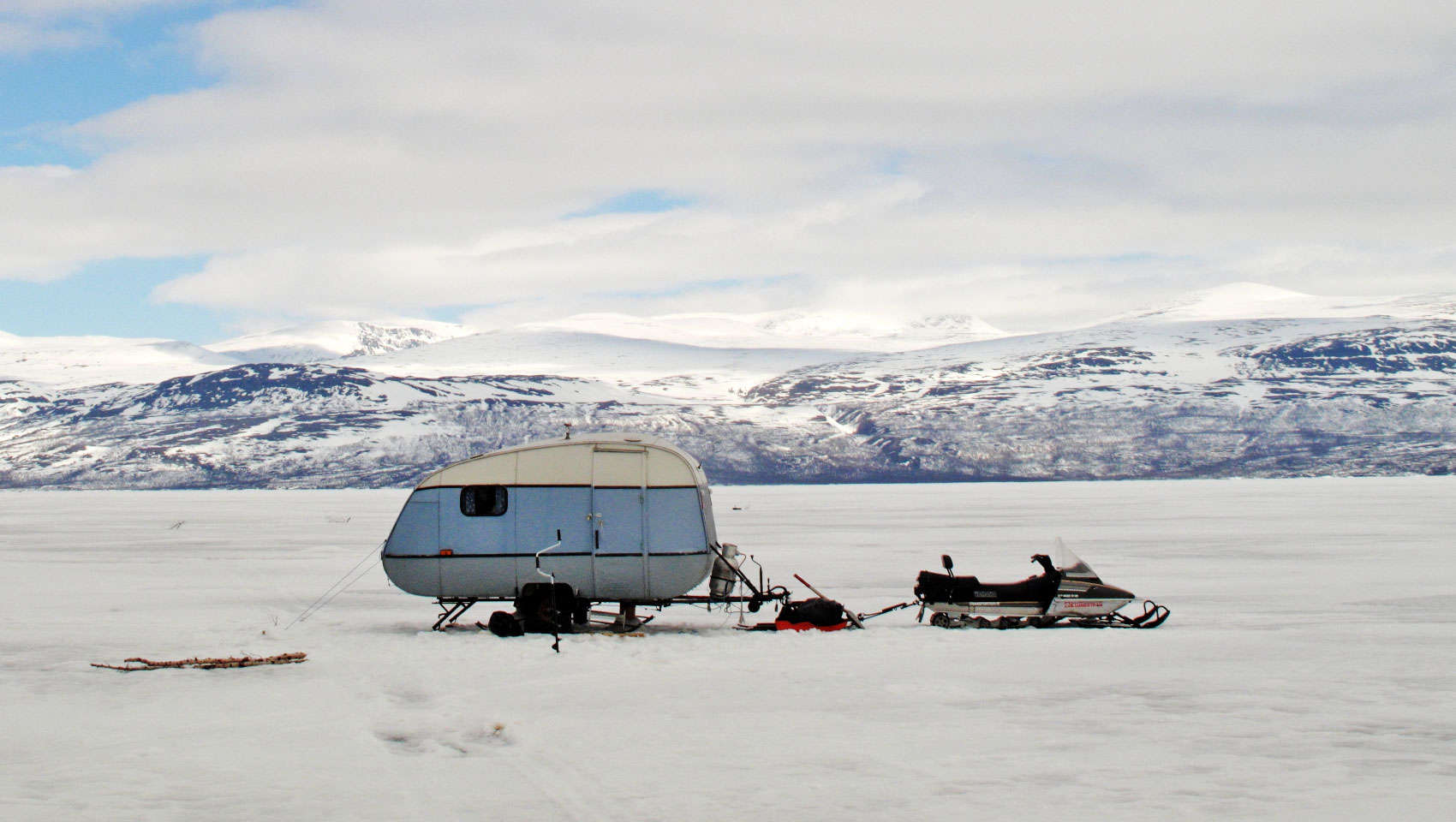 The fishing luck of mothers-in-law

The Arctic climate calls for certain innovations to master the art of ice fishing. To close the door on the cold, be comfortable and catch a fish you sometimes need a whole house. But inside the house, things are as they should: the smell of coffee on the stove, newly-baked cinnamon buns and today’s latest gossip.

Suddenly you see them through the window of the train between Kiruna and Riksgränsen. The small ‘houses’ out there on the white canvas of winter. You ask yourself: “But could that really be a good spot for a caravan?”. But they aren’t caravans from summer left to fend for themselves in winter. No, those little houses are there for a purpose. Someone has towed them there with a snowmobile and placed them where they think they’ll best serve that purpose. They are so-called ‘ice-fishing arks’. Little sheds on runners that provide shelter for ice fishing on lake Torneträsk. If you’re lucky and visit them at the right time, you might be able to see a big, arctic char appear through a hole in the floor. 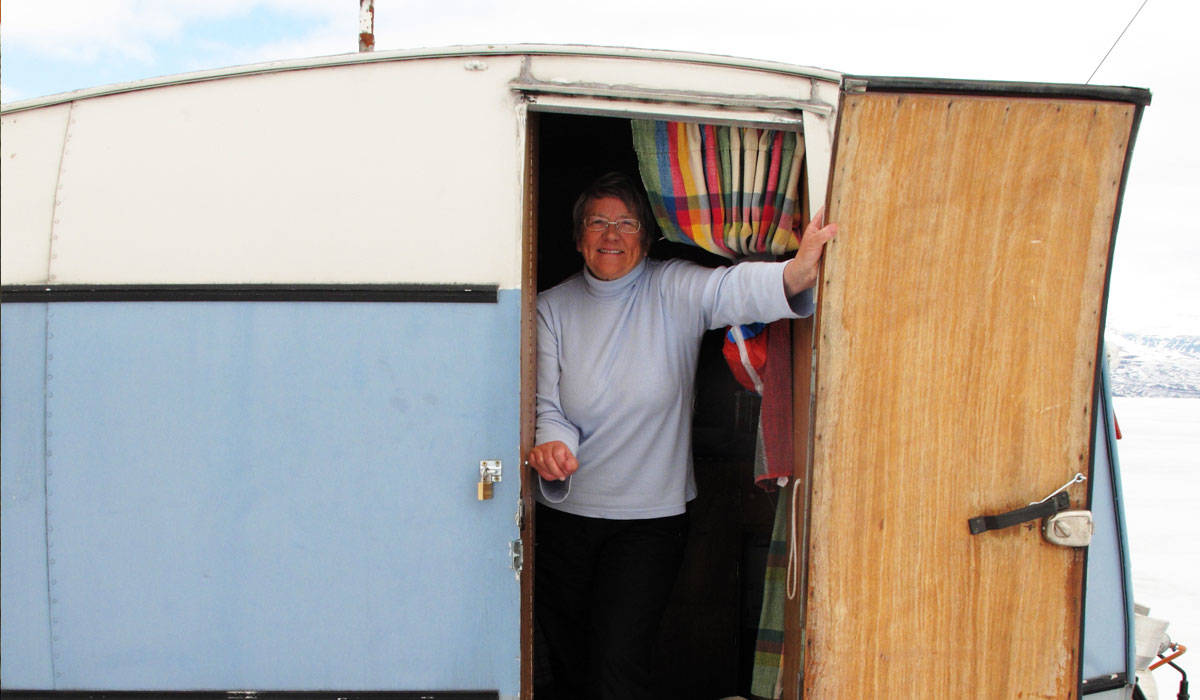 “But come on, have some more buns and you'll want another cup of coffee, won't you?”

One day in April, I’m fortunate as I knock on the door of a blue caravan by Kaisepakte. Inside sit Kerstin Johansson and Elin Flygare. Two ladies who got to know each other when their children married. They are two mothers-in-law sat in a blue caravan talking about life.

“Yes, the most common question would be: ‘Have you felt anything?’”, says Kerstin.
“But in that case, it’ll be closely followed by: ‘Let’s put the coffee on?’”, says Elin and laughs.

And me stepping inside, or is it because it looks like the fish are few and far between, seems to determine that now is the time for them to start making that coffee. “Because you’ll want some coffee and something to nibble on?”, they say in unison. And who has ever been able to refuse newly-baked goods? Soon the old caravan is filled with the smell of fresh coffee and cinnamon buns, together with an order to make sure I have my fill. 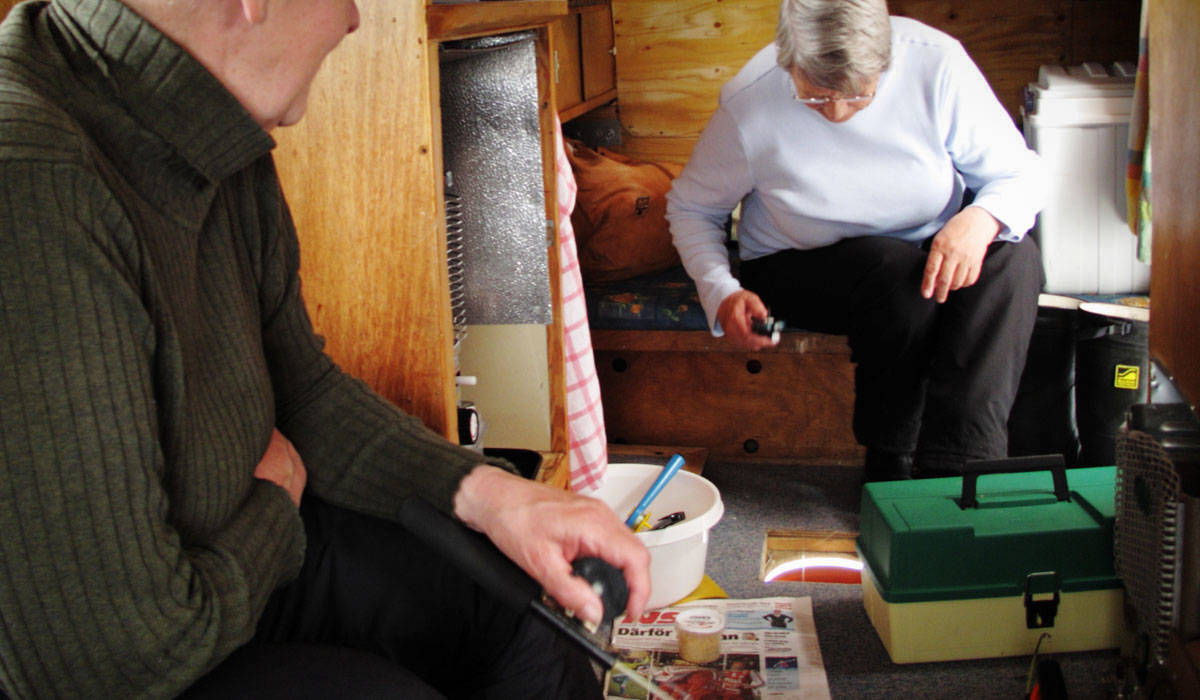 Two mothers-in-law sitting in a blue caravan ice fishing and talking about life.

Arks (usually small huts and old caravans with skids) are common in Lake Torneträsk in the Kiruna mountain area, right next to Abisko and Björkliden, from February/March to April. Since the 1930s, when locals discovered that ice fishing indoors was a good thing, they have been a sign of spring arriving.

It’s Elin Flygare’s ark. She’s had it for nearly fifteen years. Sometime during March, it gets taken to the ice by Kaisepakte and later, in May, it’s removed. Elin and Kerstin have been fishing together for nearly as many years. They share life in the ark for three to four weeks every winter – weather depending, of course. The two mothers-in-law sit there and talk about life, their children and grandchildren, whilst drinking coffee and eating cinnamon buns by a hole in the floor. Because that’s the way, it works. They are completely sheltered, with all the comforts a caravan can offer, and two holes have been made in the floor. Underneath the ark, you then drill your own hole in the ice. When the wind blows one way and then the other, and makes life miserable on the large lake in the north, they are happily indoors. When the weather is calm and beautiful, and the spring sunshine warms the mountains, they can lean their backs against the wall of the ark and let the sun warm their souls. Because if you meet someone here up north who’s really tanned, that’s rarely because of a holiday in the sun – instead it’s because they’ve been ice fishing for arctic chars for weeks.

“Actually the truth is that the fishing isn’t really what’s most important. Mostly we just want to feel good”.
“But of course – when the fish bites, you feel good.”
“But come on, have some more buns, and you’ll want another cup of coffee, won’t you?”

And of course, I have some more buns and some more coffee. It looks like the fish aren’t biting anyway.