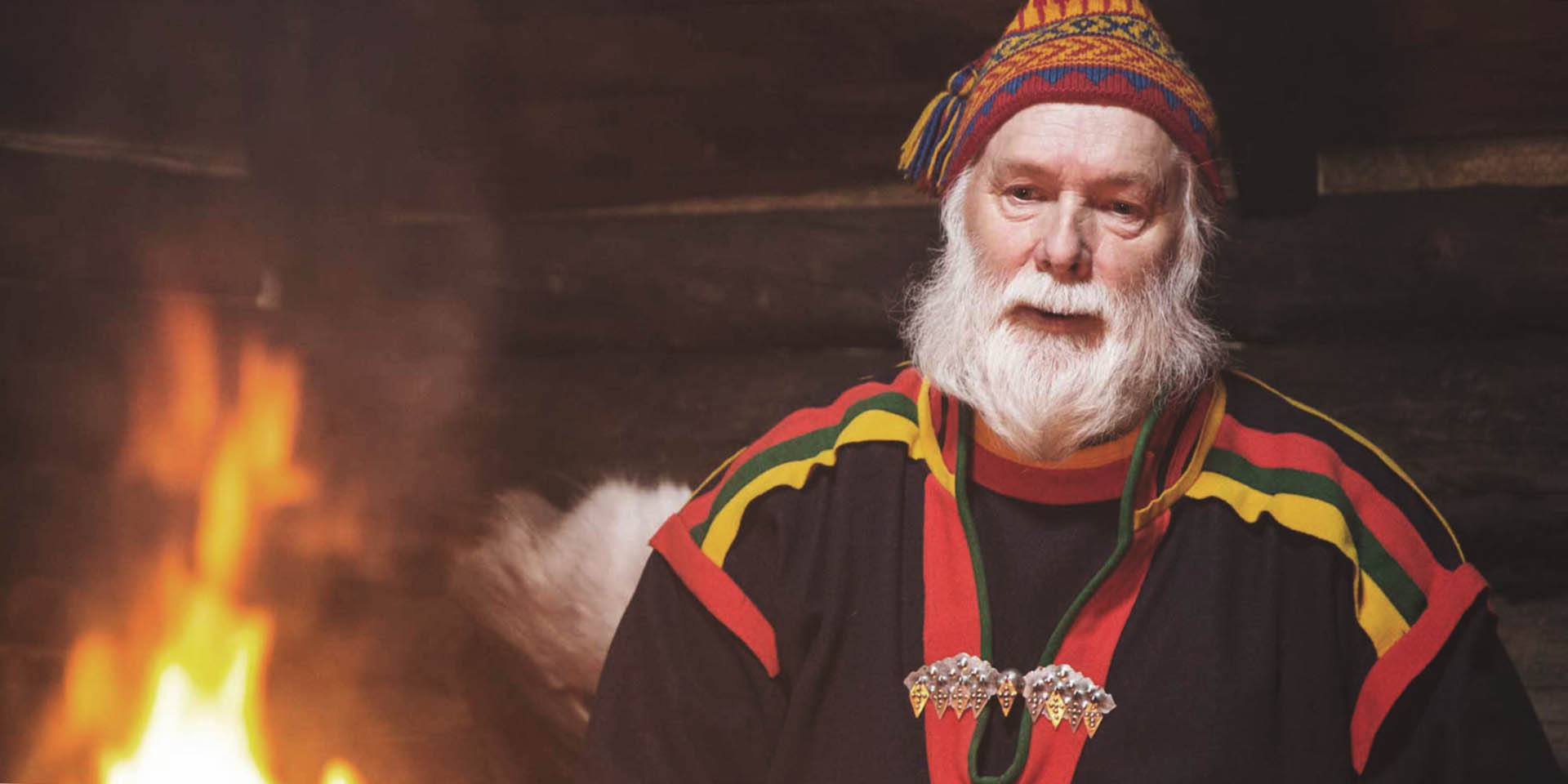 When going to visit Årstidsfolket, you will travel along winding roads through miles and miles of forest. Here, you will cross the line between past and present, old-growth forests meet newly felled ones, and old Forest Sámi myths and traditions meet with Swedish society.

With his white beard, inquisitive eyes and warm smile, one first impression you might get of Lars Eriksson, surrounded by Rudolf and the other reindeer, is that of a good-natured gnome, wearing a kolt, a traditional Sami costume. This year’s calves peek curiously out from behind him. All over the farmstead, chiming bells tell us that more reindeer are moving nearby. One is looking out from inside the firewood shed. Another greets the visitors with great interest.

A welcoming smoke rises from the rugged log fireplace, and the coffee pot is put on to boil. Then, Lars begins telling his stories. You can feel your pulse slowing down by the crackling fire, as you sip your pot-boiled coffee, which always tastes best when boiled over an open fire.

Lars Eriksson was born and raised in a Forest Sámi family that had been herding reindeer in the same place for generations. To him, as well as to his brothers, the choice to carry on the tradition of reindeer herding was an obvious one.

“When I was 13, I left school, and I told the teacher who was urging me to stay in education that sure, you can come and get me, but I will go right back home! Then I was involved in calf branding for the rest of that summer and ever since I have lived and travelled these forests and lands.”

Lars’ life story paints a picture of the development of Sámi culture and how it has dealt with the demands put upon it by Swedish society.

Just like many other Sámi children at the time, Lars was placed in a Swedish school where he was forbidden to speak his native language. It was also forbidden to visit the holy Sámi sacrificial site which is not far from where we are right now. It was consciously chosen so that no one would stumble upon it unless seeking it out to find strength and consolation.

Just like the jojk, the Sámi’s expressive style of song, the faith in Sámi gods was to be stamped out as well. Natural medicine and the knowledge of nature’s healing powers were criminalised, and Sámi prisoners were sentenced to hard labour and forced to toil with ore transportation along the Ore Trail, passing through the area where we are right now.

However, Lars also describes the joy of life, the love of the reindeer and the natural environment that exists at the heart of the Sámi culture. It is a force that has helped the Sámi culture live on and helped its language to keep developing. Professors and linguists have made their way to Lars’ family farm throughout the years, to study and document what he calls the “original Sámi language” for future generations. The Sámi language has detailed words with no equivalent in Swedish. The ability to explain different types of snow or the different shapes and forms of fire with just one word could be a matter of life and death.

When Lars tells the story of how he has lived his entire life in harmony with the reindeer and the natural environment, his eyes gleam, his stories and experiences are genuine and told straight from the heart.

“Those who have lived by and alongside the forces of nature have had good lives”, he concludes.

He sometimes travelled with the reindeer for weeks, whilst his wife, who like other women in the Sámi culture has a strong role in the household, was responsible for everything back home. He travelled alone, with his skis and his dog as his only help.

“A good reindeer herding dog meant everything, out in the forest it could do more than five men ever could have.”

He lived close to his herd in snow and rain, mosquitoes and midnight sun, slept out in the open or nomadic huts along the way, only stopping to make a fire when his reindeer halted. He read the animals to see whether they were tired, thirsty, cautious or eager and followed them on their annual migrations, still deeply rooted in the otherwise tame reindeer.

In spring, the reindeer move towards highland areas as the calving season requires caution against predators. In summer, calves are branded, and this event is a phenomenon in itself to any outsider. Every calf faithfully follows its mother. All reindeer herders have their own reindeer mark, cut into the ears of adult reindeer. To an outsider, spotting differences between the many animals with different owners moving around at the same place might seem like an impossible task. However, it is no problem for the trained eye of an experienced herder. Calves are skilfully lassoed and branded with the same mark as their mothers. Just as quickly, mother and calf find each other again, in the milling chaos of animals, moving round and round inside the pen in the cool summer night, all going in the same direction whilst making their characteristic sounds.

Treehotel – a night among the trees

In autumn it is time for the slaughter, where every part of the reindeer is kept and put to use. Sinews become tough, durable threads, antlers are used in handicraft, and so on.
“I used to preserve the hide from the lower parts of the reindeer’s legs and trade it with a woman who was good at making shoes from it. They were warm and soft and lasted for several years”, Lars explains.

In early winter and midwinter, Lars once again followed his reindeer down to the winter grazing lands closer to the coast. During harsh winters, when it was difficult for the reindeer to reach the bog moss, hanging lichens on the trees in the forestland often came to the rescue. Lars explains how the lands still remain, but nowadays snowmobiles are often used instead of skis, the demand for technological solutions has increased, hanging lichens and bog moss have disappeared, necessitating costly truck transportation along with parts of the migration trail.

“Our entire family lived off a couple of hundred reindeer, and we were completely self-sufficient. That wouldn’t work today.”

You can visit Årstidsfolket in Flakaberg as a part of your experience with Treehotel, Logger’s Lodge, CreActive Adventure and/or Aurora Safari Camp. For more information, call Boden’s Tourist Centre +46 (0)921-624 10.

Since becoming a pensioner, Lars has ceased traditional reindeer herding, opting instead to keep his reindeer close by on his farm all year round, to the great joy of his visitors. On Midsummer Eve, he shows how calf branding works. The reindeer are then let out of the pen, but they often remain near the farm nonetheless.

On the farm, Lars’ wife has a country store museum, a café and a flea market which is held a couple of days every week throughout the summer. At the nearby lake, there are three log cabins available for hire, for those of you who would like to stay in solitude, with nature as your closest neighbour. Here you will also find a Forest Sámi hut where Lars invites groups to hear him tell his story. Last but not least, there is a log sauna with a wood-burning stove where you can mull over all your experiences and impressions, with the calming crackle of the fire in the background.

In winter you can roll in the snow outside, and in summer you can cool down with a swim in the lake, just outside the door. Under the midnight sun in summer or the starry winter sky, where the northern lights begin showing in early autumn, it is easy to agree with Lars’ philosophy that those who have lived close to nature have had good lives. You should try it too.