The World of Rimon

Rimon Lahdo was actually on his way to Norway when he was offered a job in Stora Sjöfallet and thought why not give it a try. Little did he know how quickly the world can change. Now he’s sat here, with paint in his hair, a cup of coffee in his hand – and his very own mountain lodge.

We have a coffee, Rimon Lahdo and I, on the veranda at Stora Sjöfallet Mountain Lodge. He doesn’t always have time to sit down, so I take the opportunity to spend some time with him and ask:
— But how did you end up here, anyway?
— Ha ha, it’s a long story. I’m not sure I’ll be able to tell it the way it really happened, but I could try to summarise it for you.

It all began when Rimon decided that because he enjoyed being outside, he might go to Norway. But, for various reasons, he ended up in Stora Sjöfallet instead. You’ll find this location some two thirds of the way along the road often referred to as ‘the longest dead end in Sweden’, the Way West. If you ever find yourself driving down this road, you’ll soon realise it has a lot in common with the Norway that Rimon likes. You won’t get this close to Alpine Sweden anywhere – through a car window. If you park your car, there are waterfalls and mountain peaks, hiking trails and wildlife right by the road.

Just liking Norway doesn’t mean you’ll end up in Stora Sjöfallet running a mountain lodge. You have to like people, and service. There’s a lot to be said about how this facility used to be run, of course, but no matter how you look at it you’ll end up feeling that Rimon Lahdo has done a hell of a job with the lodge refurbishment.
— Well, you know, most people would have broken down if they’d bought a mountain resort six months before the Corona outbreak. But what was I supposed to do? Lie down and cry?
— All I could do was roll up my sleeves and get the hammer out. There were things to do and things to redo.

Rimon has been building and rebuilding the place for more or less two years. Renovated what was broken, touching up what could be fixed. It’s now something completely different. That feeling of a mountain lodge is still here, but Mediterranean nuances have been added, too. The green, almost turquoise, colour isn’t part of everyday life in a Swedish home the way it’s part of Rimon’s Syrian heritage.

”Today the Laponia area is protected as a world heritage and is considered to be by far the most outstanding, and of great importance to humanity”

Stora Sjöfallet, the waterfall itself, used to be a mighty sight once upon a time, when it was known as Sweden’s Niagara Falls. In 1909 the area became a national park, one of Europe’s first American-style national parks. But then the world war started. Europe needed to be rebuilt and Swedish steel was sought after. Some politician realised that the Swedish Niagara Falls might be better used feeding electricity plants than visited as a destination, and the national park boundaries were redrawn overnight. A debate we shouldn’t get stuck in. Instead, we can state that in order to expand the dams, in Ritsem and Vietas among other places, staff accommodation was needed. When the dams were built and ran unsupervised, the staff left and the barracks remained. Someone thought perhaps you could build tourism around it, and that’s how the Stora Sjöfallet facility came to be. Some 50 years later, Rimon Lahdo refills my coffee cup and says:
— But isn’t it incredibly beautiful?

You just have to agree. The facility is located in Stora Sjöfallet/Stuor Muorke National Park in what is also World Heritage Laponia since 20-some years. Nearby you’ll find Naturum Laponia, featuring the building Snöfälla designed by architect Gert Wingårdh. You can walk over to Naturum, and just past it, Fiskflyg has one of its helicopter bases. Taking a beautiful sightseeing tour in the sky is an amazing experience. So, Stora Sjöfallet/Stuor Muorke became a national park in 1909, one of nine national parks that were established in Sweden and the first ones in Europe.

Later Sweden applied for the area – together with Sarek, Muddus and Padjelanta – to become a World Heritage Site due to its nature. This was rejected by UNESCO. Laponia might be pretty, but its nature wasn’t that worthy of protection – there was that issue with the ‘Niagara Falls’ disappearing, among other things. But UNESCO did decide that the nomadic Sami lifestyle in the area was a world heritage. Today the Laponia area is protected as a world heritage both for its culture and its nature (the nature was just kind of dragged along) and “is considered to be by far the most outstanding, and of great importance to humanity”. Of the world’s 1154 World Heritage Sites, only 39 are named as such for both culture and nature. We’re sat in the middle of one drinking coffee.

Kungsleden runs from Hemavan to Abisko in the Swedish mountains. The 450-kilometre long trail will take you through the Vindelfjällen nature reserve, the Laponia World Heritage, four national parks and the headwaters of Sweden’s four remaining national rivers. This is the most beautiful hike up north, covering some vast and wild land.

After a morning walk, or late morning walk to be honest, to Naturum Laponia and a hike through the distinctive pine forest surrounding the area, and a trip on the footpath to Sjöfallet, I sit down at the dining table at the lodge. There’s a lot of people here; I can hear several languages and it feels international and wonderful.

The first course is a seared tartar with leavened rhubarb and apples, served with horseradish cream and dried, grated yolk. A good start. Then there’s Arctic char with trout roe, browned butter, and white-wine foam. Not bad either. On the contrary, I feel like licking the plate clean to get to the last of the browned butter and white-wine foam. But my colleague looks at me sternly, so I won’t. Instead, I order an extra sourdough bread to soak it all up. I can feel I’m at a crossroads here. Will I leave hungry? But a reindeer topside arrives, with lacinato kale and buttery mashed potato, and I suddenly feel calm. The reindeer is served with blueberry sauce, truffle and porcino emulsion. I immediately regret having eaten all the bread. My colleague gives me another look and I refrain from ordering more, but I manage to scrape up some sauce with a finger when the colleague isn’t looking. Dessert is a spruce-shoot parfait with cloudberry sauce and toasted white chocolate. My goodness it’s tasty.

”Here at Stora Sjöfallet Mountain Lodge, Rimon Lahdo has created a facility that's perfect for those who come here to just 'be'”

The next day, at breakfast, I ask Rimon some more questions about the food and the wine and he laughs.
— So, you were satisfied?
— Yes, most definitely. Marvellous!
— Yes, making guests happy is important, and food is a good way of ensuring that.
— Is that a philosophy?
— Satisfied guests, or damn good food? Or both?
Then he laughs and tells me that food is a tradition where he’s from, that food is important – something that holds families and neighbourhoods together. Then he continues to serve the breakfast guests.

I hear people talk about the day ahead. Some are continuing into the mountains towards Ritsem, hoping to see the mighty Áhkká. Others are driving down to the forest country, and some are making day trips along Kungsleden or up to Soldalen. I ask Rimon what he’s going to do. He says he’s very busy. The trips he goes on himself must have a purpose, and/or a reason. Either he’s out to take photos, to catch a fish or pick berries. Just taking a stroll isn’t really something he’s got time for.

From here you can drive to Ritsem and take the tour boat M/S Storlule to Änonjálmme, for a day trip under the Áhkká massif.

Behind the next bend

There’s in fact something contradictory about this. Here at Stora Sjöfallet Mountain Lodge, Rimon Lahdo has created a facility that’s perfect for those who come here to just ‘be’. Taking a walk over to Naturum, making short day trips, driving into the country, enjoying the view through the windscreen. Tomorrow I might drive to Ritsem and take the tour boat M/S Storlule to Änonjálmme, for a day trip under the Áhkká massif.
— Yes, it’s a nice day trip, Rimon says when I mention it. Today I think you could take a walk up to Soldalen. Also incredibly pretty. Or you could hike up along Kungsleden, at Vakkotavare.

On my way to Vakkotavare, just past Vietas, I park my car and look north, towards the mountain Juolmme where the waterfall Tvillingfallet cascades down the steep wall. Among locals and ice climbers the fall is usually called the Count and the Countess, but on the map the waterfall doesn’t really have a name. It’s quite strange, because it’s probably Sweden’s highest fall – more than twice the height of the one usually referred to as the highest one. Then I keep going. Behind the next bend I see reindeer: a female with her calf, and a bit further away a white-tailed eagle sat watching from a pine tree. There’s something wild and powerful about the scene, about the place. It’s so incredibly beautiful.

On a headland called Viedásnjárgga in Stora Sjöfallet National Park lies Naturum Laponia. It's a place that tells a stor... 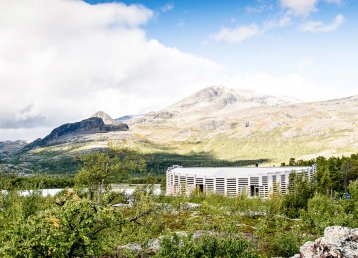 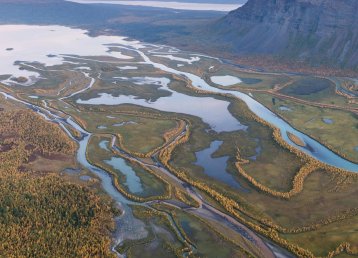 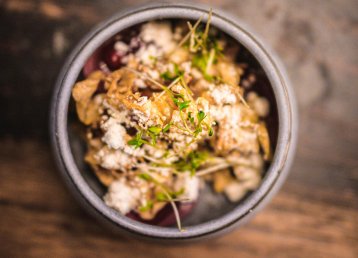