Stay among the trees

What started with a film featuring a small wooden hut in the forest has become a cool hotel. These days Treehotel in Harads is considered one of the world's foremost travel destinations. But Treehotel is more than just a design favourite among the treetops. It’s the childhood fantasy we’ve all dreamed of – just in a more luxurious package.

A slow walk through the birch forest that surrounds the path between breakfast at the Treehotel restaurant and my room, the Mirrorcube, soon reveals the grandeur of the hotel. The beautiful birch forest lets thoughts resonate on their own in the dim morning light. No real stimulus is needed. Life is taken down to a level where everything is in harmony. I run my hand across one of the birch trunks along the path, and it almost feels like a handshake with nature itself. Rugged and resolute, but welcoming at the same time. Here in the forest, it’s easy to understand the Japanese philosophy ‘shinrin-yoku’, how forests and trees have a kind of calming effect on the racing pace of society. A night in a treehouse and I’m already all-in when it comes to the phenomenon ‘forest bathing’.

One hour from Luleå, shortly after passing Boden on the road towards Jokkmokk and the Arctic Circle, is where you find the village Harads. At the beginning of the village – approaching it from Luleå – is a nearly 100-year-old guest house that Kent and Britta have lovingly renovated. They kept the original charm and character of the building and transformed it into a cosy guest house and restaurant.

Their vision was to create a place where guests felt at home. But then they realised that the ‘tree rooms’ would be the entire reason for travelling. In many ways, the Treehotel establishment is a time capsule. At the same time as they’ve managed to preserve the charm and elegance of a simpler time – when food was seasonal and people stress-free and enjoying each other’s company – some of Scandinavia’s most famous architects have provided a modern design. In that sense, the path up to the tree rooms becomes a journey in time, from the stress-free capsule at the guest house to the next update on Instagram.

The year was 2008. Kent and Britta were running Brittas Pensionat in Harads, what is now Treehotel Guesthouse. Kent joined some of Sweden’s most well-known architects on a fishing trip where they discussed a documentary they had just seen on Swedish television. The film, The Tree Lover by Jonas Selberg Augustsén, is about a young man who wants to escape the summer in the city and build a treehouse by the Lule River instead. Around the campfire that evening, they had an idea: they would all design one tree hut each, and those huts would be the framework of a new hotel. And that’s what happened. When Kent returned home, he bought the land around his guest house, and construction could begin. The old guest house actually adds to the experience. As you travel the road through the forest, from a classic guest house to a cool treehouse, a change takes place.

– There were actually lots of people who said we should tear it down and make everything modern. But looking back I’m glad we didn’t, Kent says.
– Instead of just complimenting each other, the different houses and styles add to each other.

Once the idea had been put out there at the campfire and began to take shape, the investment in Treehotel was about design, first and foremost. Some of the most famous architectural firms in Sweden designed the first five rooms among the beautiful pine trees in Harads: SandellSandberg, Cyrén & Cyrén and Tham & Vidgård. Bertil Harström at Inredningsgruppen also designed two rooms and the facilities needed to make it an exciting hotel. Because we all know that no modern hotel in the north comes without a sauna and a spa. The Finnish architect Sami Rintala, from the agency Rintala Eggertsson, designed the sixth room called Dragonfly before Jenny Osuldsen at Snøhetta designed the latest addition: the 7th room – a room that takes the hotel to new heights, as the seventh room is suspended ten meters up in the air. Among the canopies, almost at the height of the strongest northern lights in winter or the eternal midnight light in summer, new and returning guests are welcomed.

Treehotel has seven rooms among the treetops: the Cabin,
the 7th Room,
and the Dragonfly are three of them.

Snøhetta, a well-known Norwegian design and architectural firm, has added even greater fame to Treehotel. Among other things the Norwegian agency has redesigned the famous museum SFMoMA in San Francisco, designed the modern version of the classic library in Alexandria as well as the contemporary landmark the Opera House in Norway’s capital Oslo. The design is probably the main reason why Treehotel has won so many awards over the years: design, location and ambience.

The treehouse was named one of the world’s best travel destinations by Time Magazine 2018. It was awarded first place in National Geographic Traveller’s Design Den category a few years before that. The hotel has also received Mr & Mrs Smith’s award as “Best Family Hotel”. The latter might not be so strange. The 7th room can easily sleep five people ten metres above ground, and also: what child wouldn’t want to sleep in a UFO or a bird’s nest? Those two rooms were designed by architect Bertil Harström, who quickly decided he wanted to build a bird’s nest, just because it’s something you’d expect to find in the forest.

– But I also wanted to make something you wouldn’t expect. And yes, I do believe a UFO is the last thing someone would expect to find in the forest, says Bertil Harström.

While working on the Bird's nest, which is largely in harmony with its surroundings, the idea of creating something entirely different was born.
And what could be more different than a Ufo?

Shinrin-yoku is the Japanese term for a trend referred to as forest bathing in English. We all know how good it feels to be out in nature. Still, we hardly give ourselves a chance to do so. It’s estimated that in 2050 2/3 of the world’s population will live in cities. According to a survey by EPA, the environmental protection agency, the average American spends 93% of their life indoors these days. Shinrin-yoku isn’t about doing anything. It’s not training, not running, not jogging, not even picking mushrooms. It’s about just being. Experiencing the light, sounds and scent of the forest. Dr Qing Li, the author of several books on the theme, says the key to a good ‘forest bath’ is to give yourself time. Disconnect from the constant attention of modern society for a couple of hours. Let your body listen, smell, see, taste and feel the forest. Become part of the forest’s own cathedral of light.
Or just check in to a tree hotel? A large pine grows straight through the room Mirrorcube, mine for the night. I stroke it whenever I get a chance. Sipping on a glass of red and ignoring updates to the feed. When the wind whistles, the hut moves slightly. Kind of swaying. I’m really in a treehouse.

Mirrorcube was designed by Bolle Tham and Martin Videgård and built by a local Harads company. It has a large pine growing straight through the room. Photo: Per Lundström

The 7th Room faces an open area and provides you with the perfect space to just sit back and relax, enjoying the heat from an open fire at the same time as the northern lights swirl and crackle just outside. The balcony of the Cabin used to have the highest view, ten metres above the ground. But the floor of the 7th Room is at ten metres’ height, so here you really live among the treetops.

– Yes, in summer you can actually sleep on the balcony under the open sky, says Kent Lindvall as he shows us around on a sneak peek.
– You know, mosquitoes don’t fly 10 metres up in the air.

The balcony is more like a dense net than a balcony. It gives you a feeling of climbing among the trees. In many ways that’s exactly what you’re after when you’re staying at one of the coolest hotels in the world. Being among the trees with a magnificent view.

We were kindly allowed to read the guestbook from Logger's Lodge, filled with ecstatic reviews from world celebrities, o... 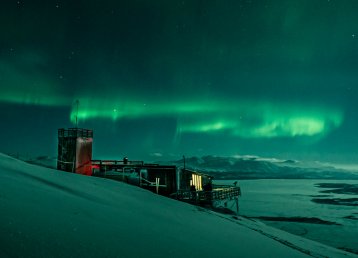 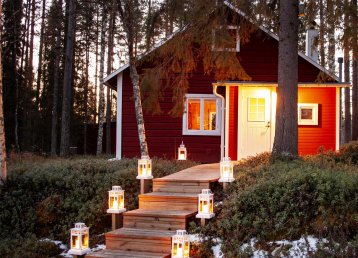