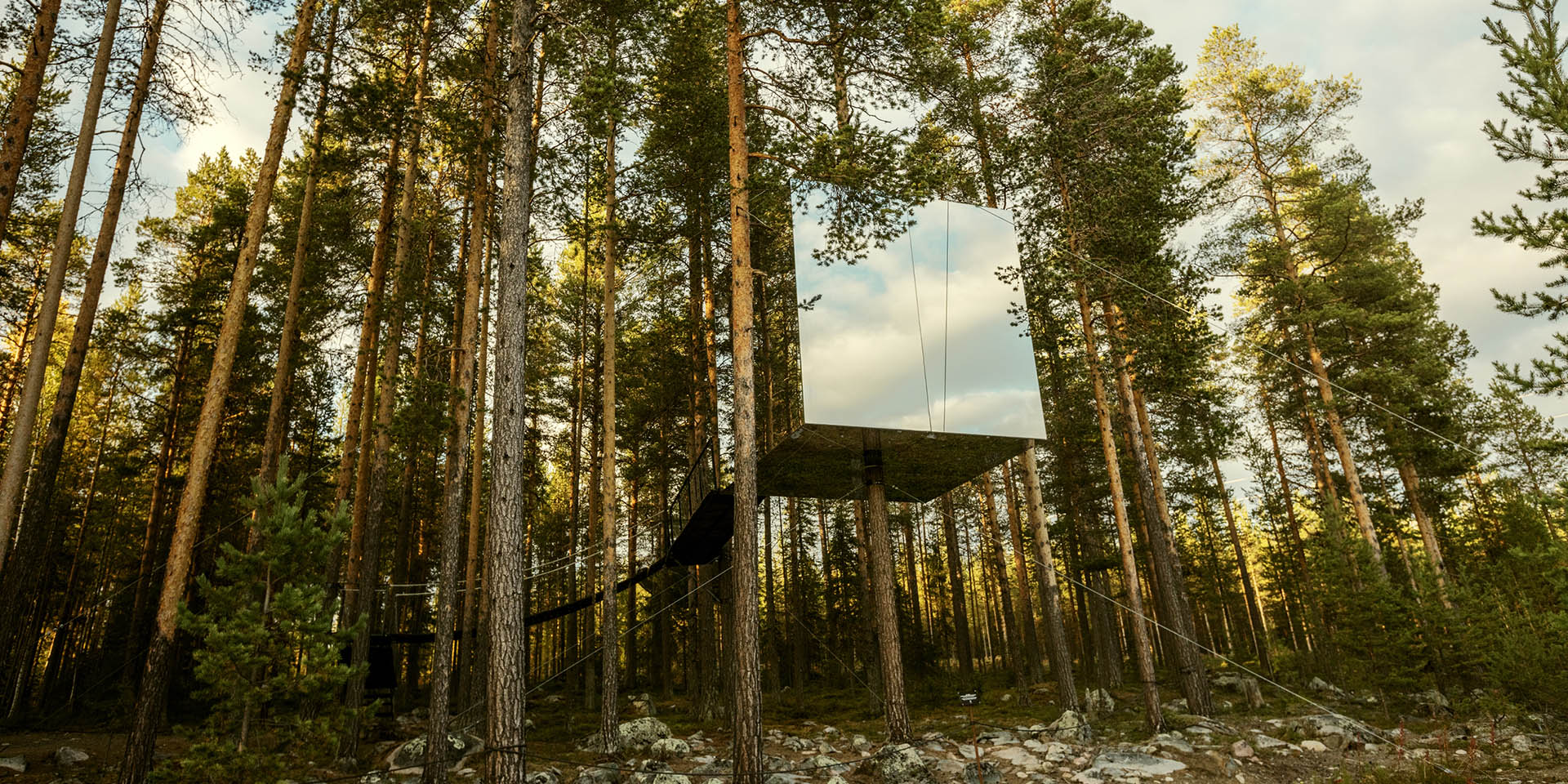 A night among the trees

Treehotel in Harads is more than just a design favourite among the treetops. Returning after a day packed full of experiences there’s a treat in the form of locally produced food from Swedish Lapland waiting. It’s the childhood fantasy we’ve all dreamed of – just in a more luxurious package.

A philosophy of tranquillity

A slow walk through the birch forest that surrounds the path between breakfast at the Treehotel restaurant and my room, the Mirrorcube, soon reveals the grandeur of the hotel. The beautiful birch forest lets thoughts resonate on their own in the dim morning light. No real stimulus is needed. Life is taken down to a level where everything is in harmony. I run my hand across one of the birch trunks along the path and it almost feels like a handshake with nature itself. Rugged and resolute, but welcoming at the same time. Here in the forest, it’s easy to understand the Japanese philosophy ‘shinrin-yoku’, how forests and trees have a kind of calming effect on the racing pace of society. A night in a treehouse and I’m already all-in when it comes to the phenomenon ‘forest bathing’. 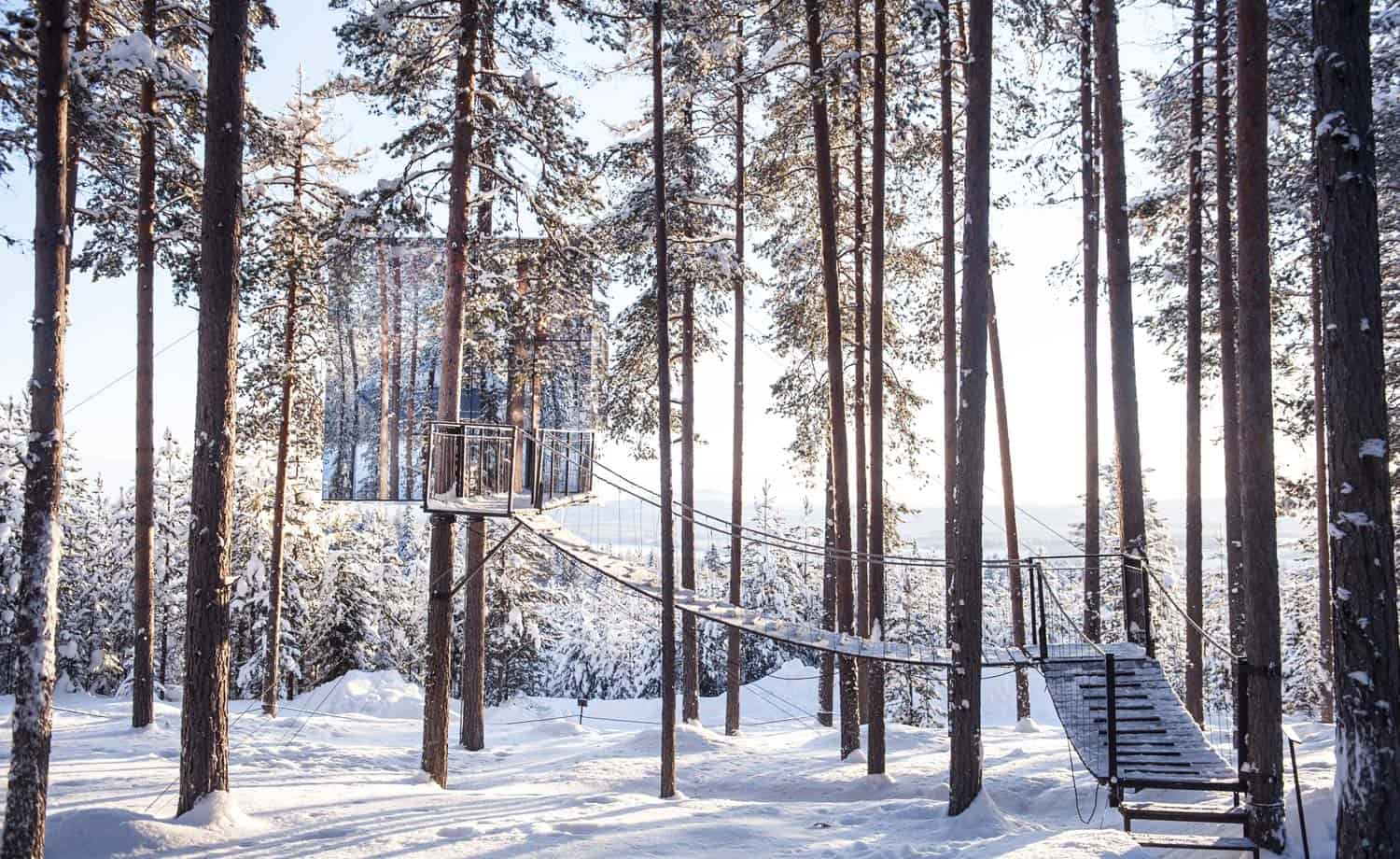 The Mirrorcube. Photo: Per Lundström. 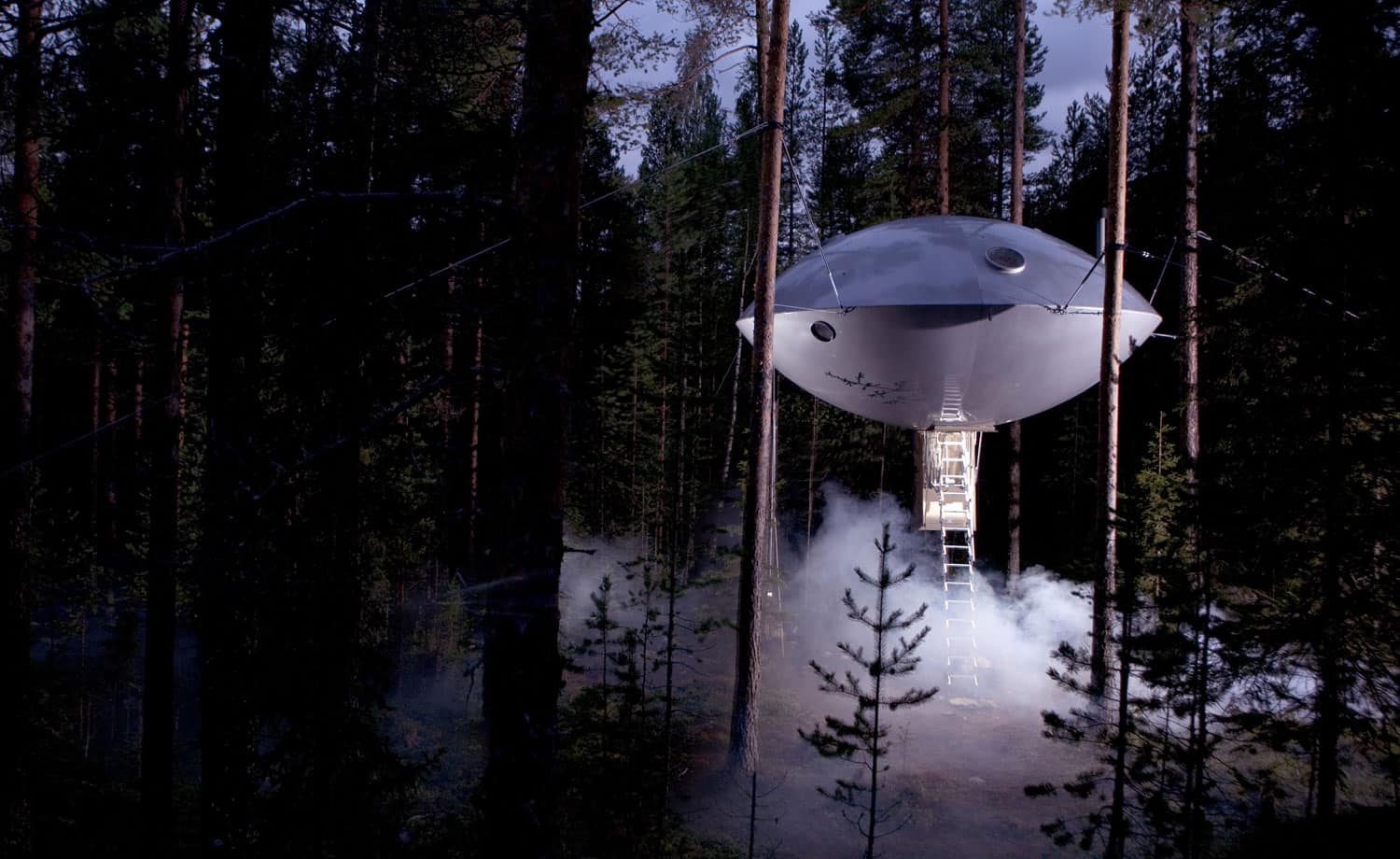 These days you can find Treehotel in Harads on countless Pinterest boards, Instagram updates and bucket lists in glossy travel magazines. Owners Kent and Britta Jonsson Lindvall were not new to the hotel business when they came up with the idea. The couple had jointly run popular Brittas Pensionat (nowadays Treehotel Guesthouse) in Harads for many years. But then they took it all to a new level. How Britta and Kent came up with the idea of opening Treehotel is, of course, a story all in itself. A friend of the couple made a documentary about building a tree house. Kent and Britta soon realised there was something magical about the concept. They had loved to build tree houses themselves in their childhood and just imagined that others would like to live among the treetops, too. During a fishing trip in 2008, when Kent and some of Sweden’s most famous architects were sat around a campfire, he told them about the idea of making tree houses into hotel rooms. It didn’t take long for his dream to become reality and Treehotel was designed, drawn and built in the forest behind what was the guest house. 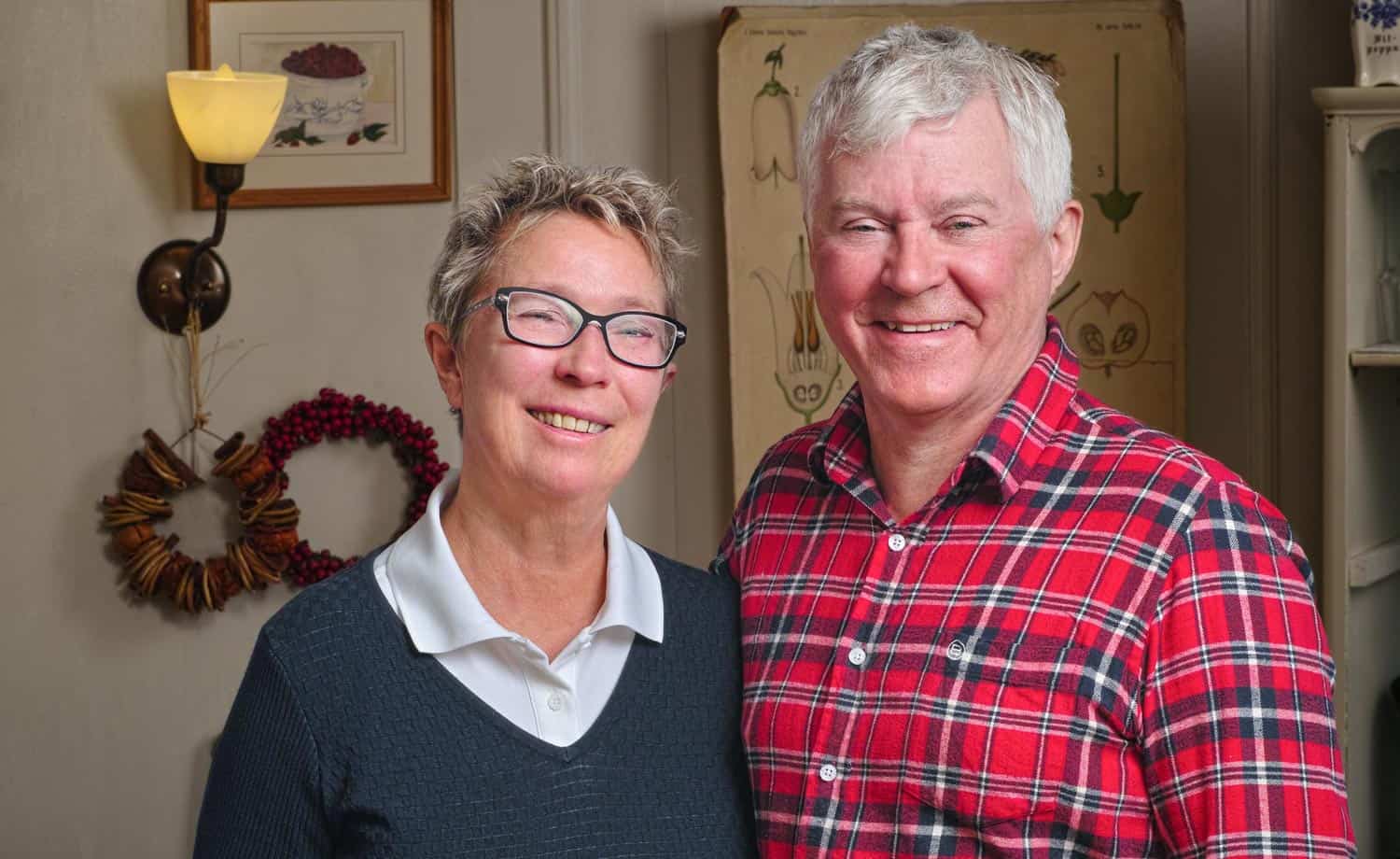 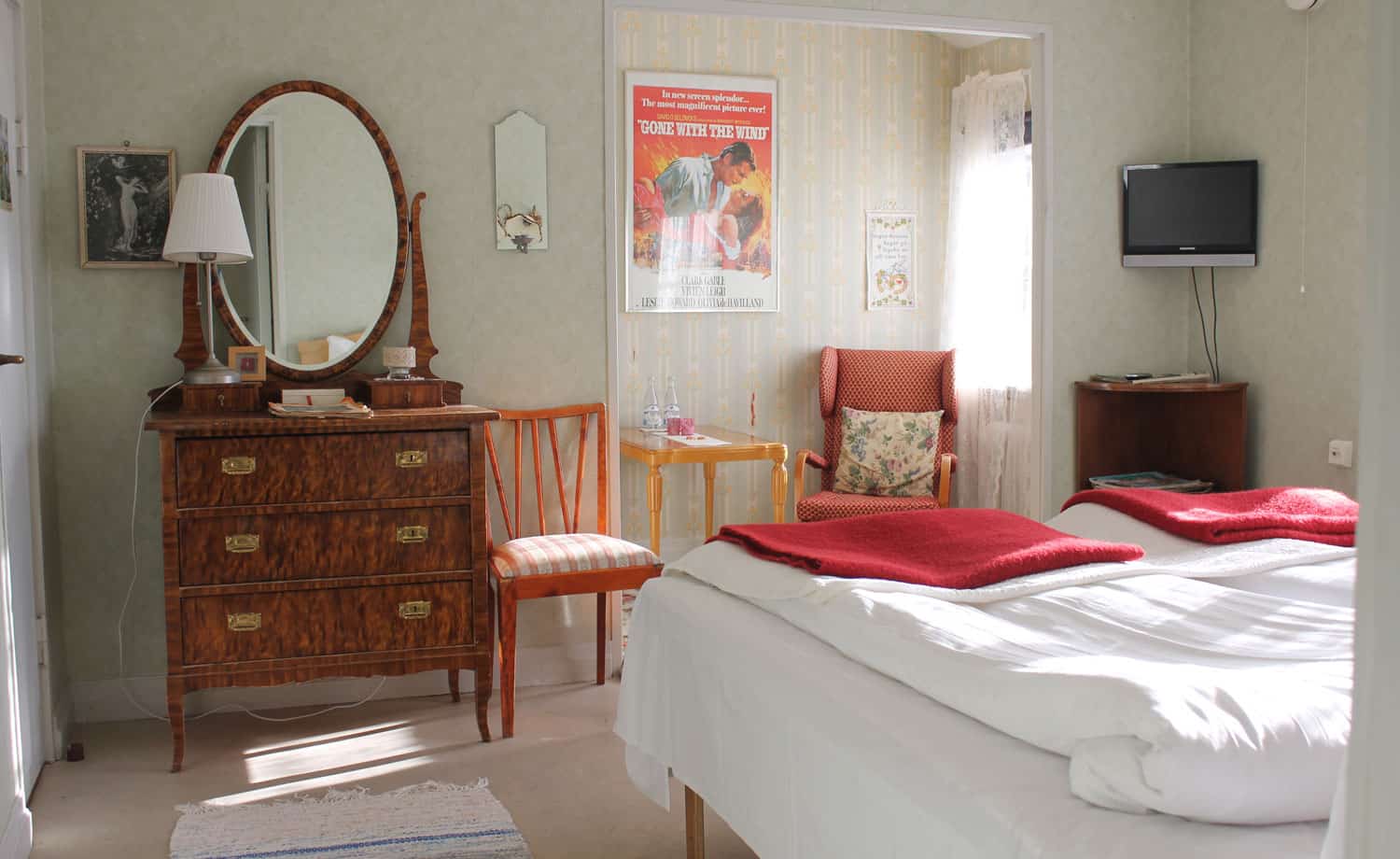 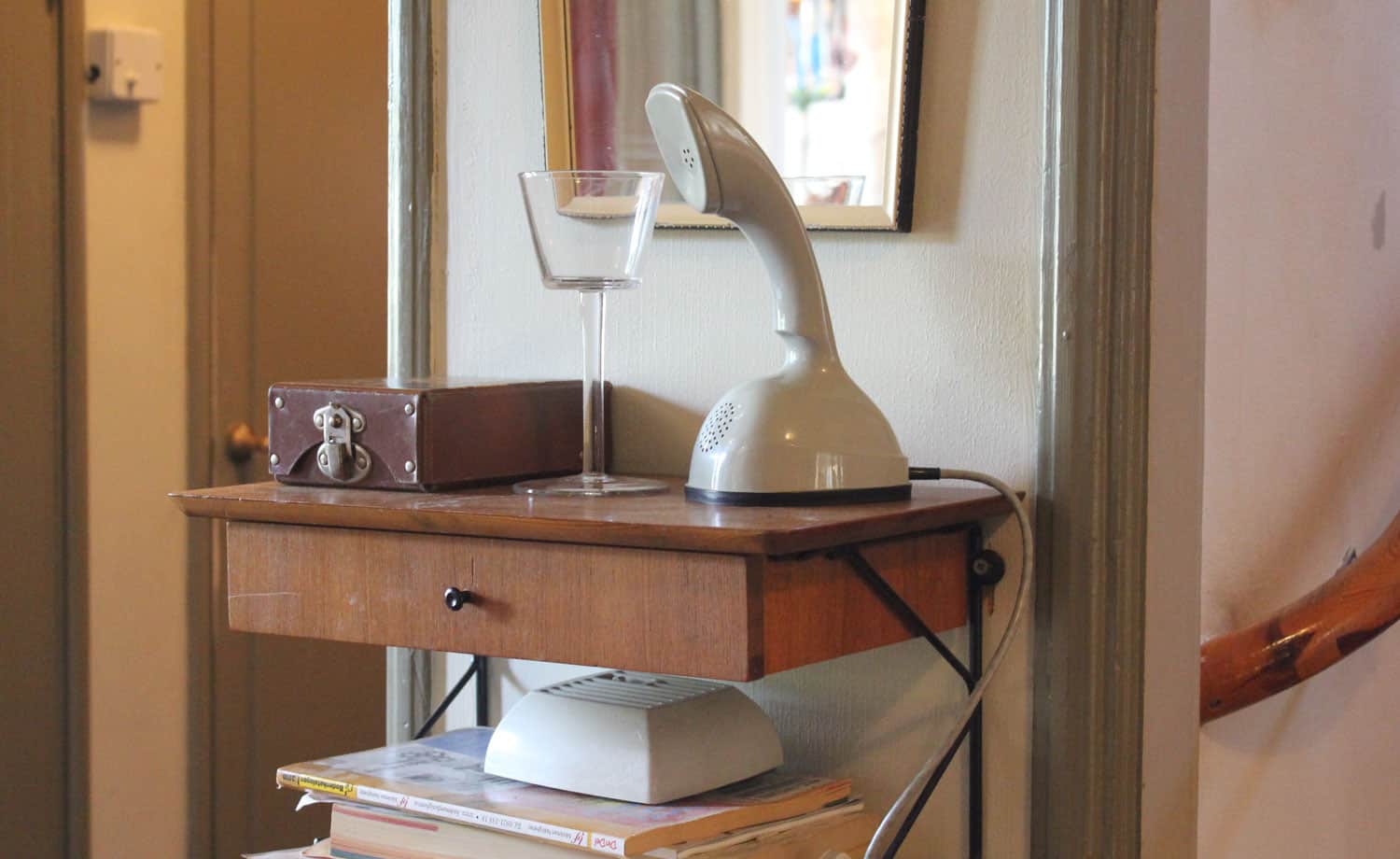 They kept the original charm and character of the building.

One hour from Luleå, shortly after passing Boden on the road towards Jokkmokk and the Arctic Circle, is where you find the village Harads. At the beginning of the village – approaching it from Luleå – is a nearly 100-year-old guest house that Kent and Britta have lovingly renovated. They kept the original charm and character of the building and transformed it into a cosy guest house and restaurant. Their vision was to create a place where guests felt at home. But then they realised that the ‘tree rooms’ would be the entire reason for travelling. In many ways, the Treehotel establishment is a time capsule. At the same time as they’ve managed to preserve the charm and elegance of a simpler time – when food was seasonal and people stress-free and enjoying each other’s company – some of Scandinavia’s most famous architects have provided a modern design. In that sense, the path up to the tree rooms becomes a journey in time. From the stress-free capsule at the guest house to the next update on Instagram. 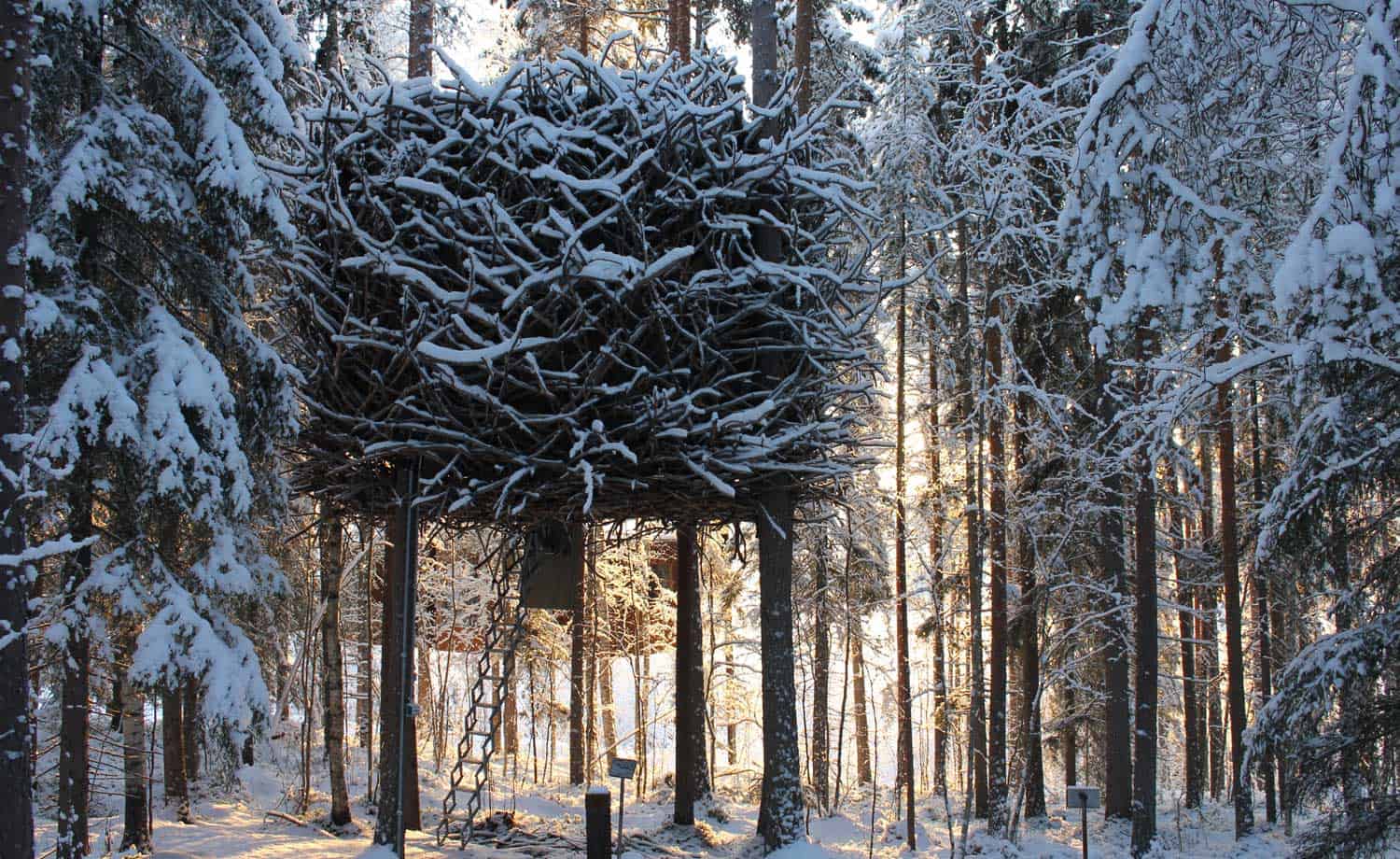 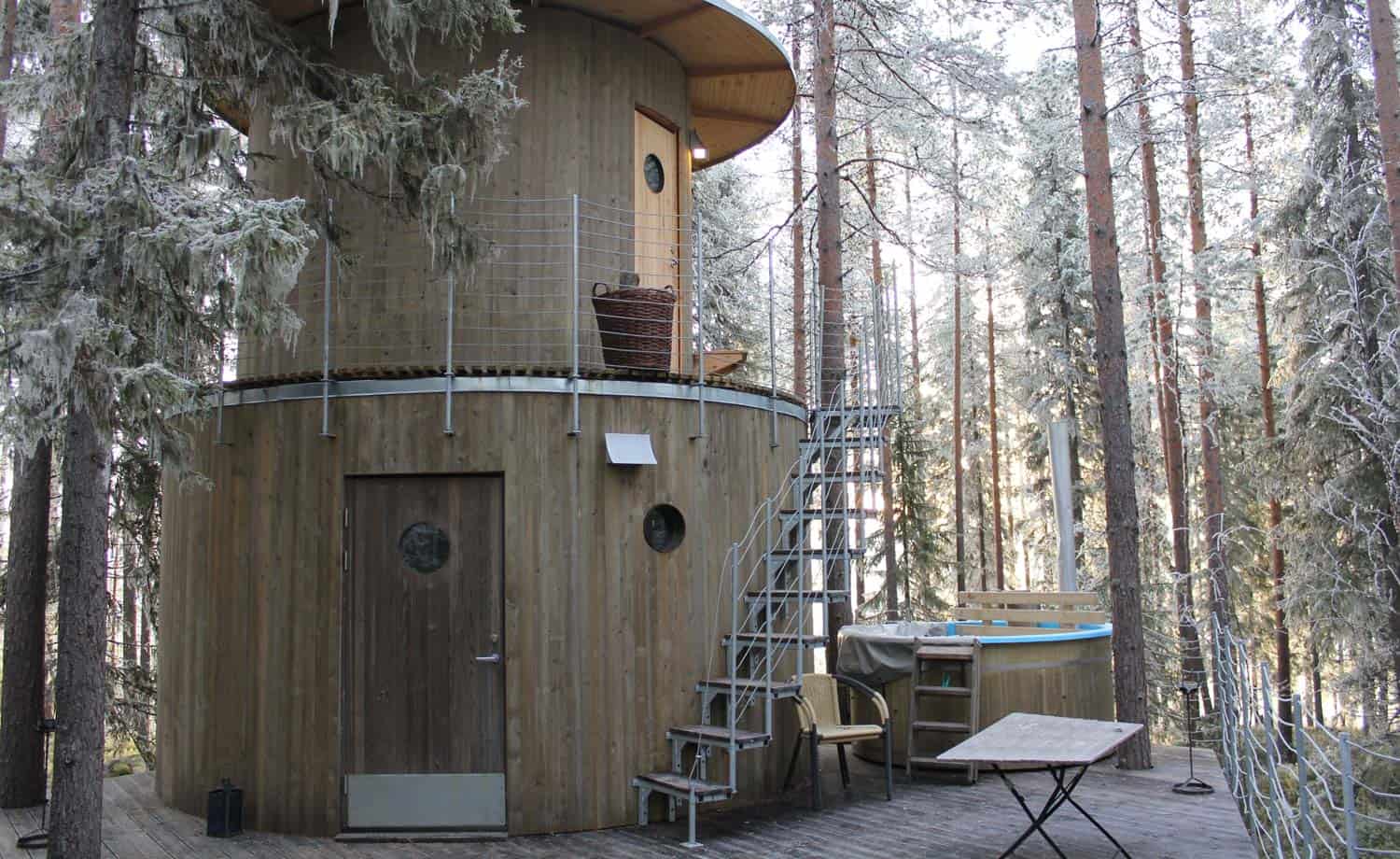 Shinrin-yoku is the Japanese term for a trend referred to as forest bathing in English. We all know how good it feels to be out in nature. Still we hardly give ourselves a chance to do so. It’s estimated that in 2050 2/3 of the world’s population will live in cities. According to a survey by EPA, the environmental protection agency, the average American spends 93% of their life indoors these days. Shinrin-yoku isn’t about doing anything. It’s not training, not running, not jogging, not even picking mushrooms. It’s about just being. Experiencing the light, sounds and scent of the forest. Dr Qing Li, the author of several books on the theme, says the key to a good ‘forest bath’ is to give yourself time. Disconnect from the constant attention of modern society for a couple of hours. Let your body listen, smell, see, taste and feel the forest. Become part of the forest’s own cathedral of light.

Or just check in to a tree hotel? A large pine grows straight through the room Mirrorcube, mine for the night. I stroke it whenever I get a chance. Sipping on a glass of red and ignoring updates to the feed. When the wind whistles, the hut moves slightly. Kind of swaying. I’m really in a tree house. 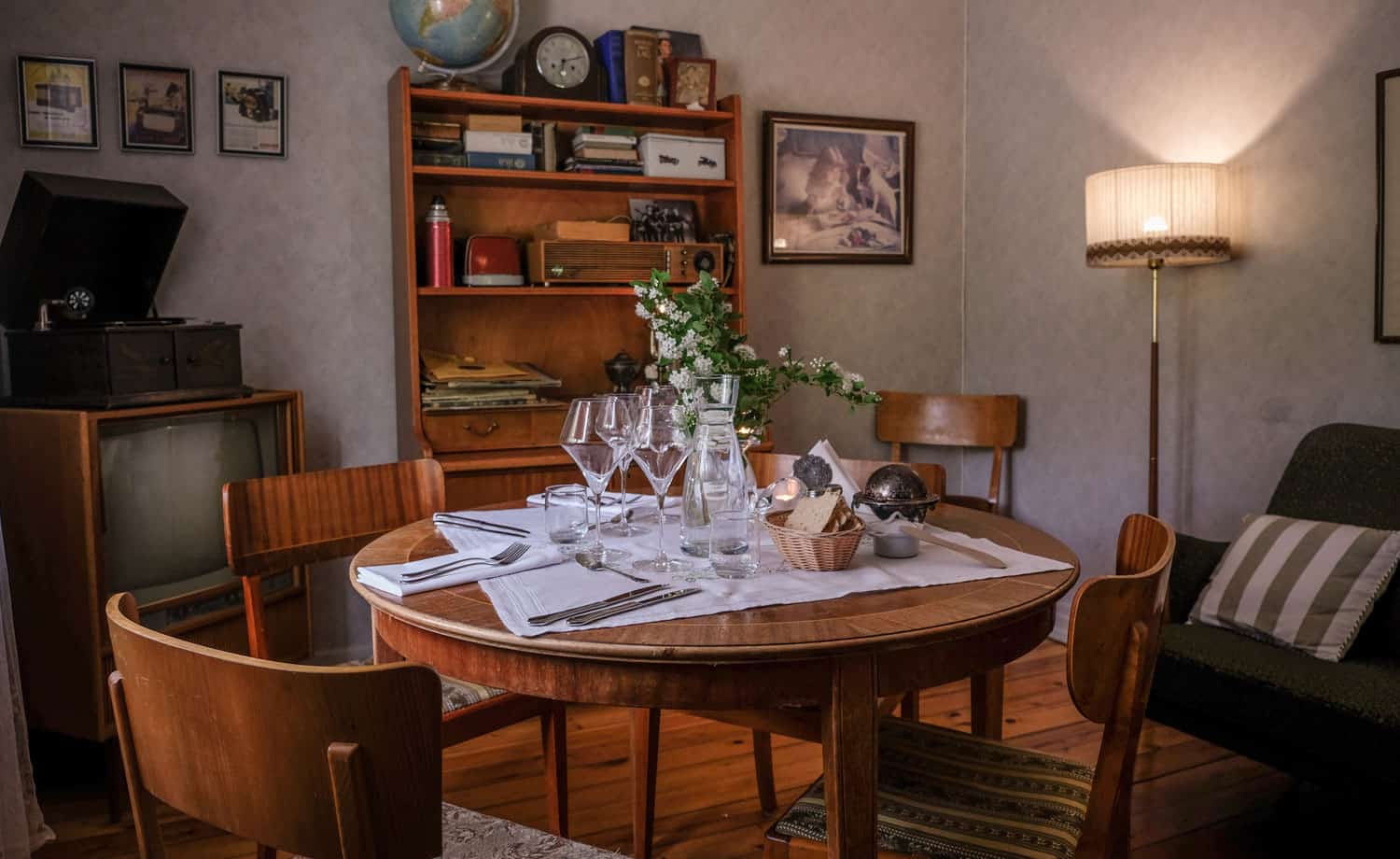 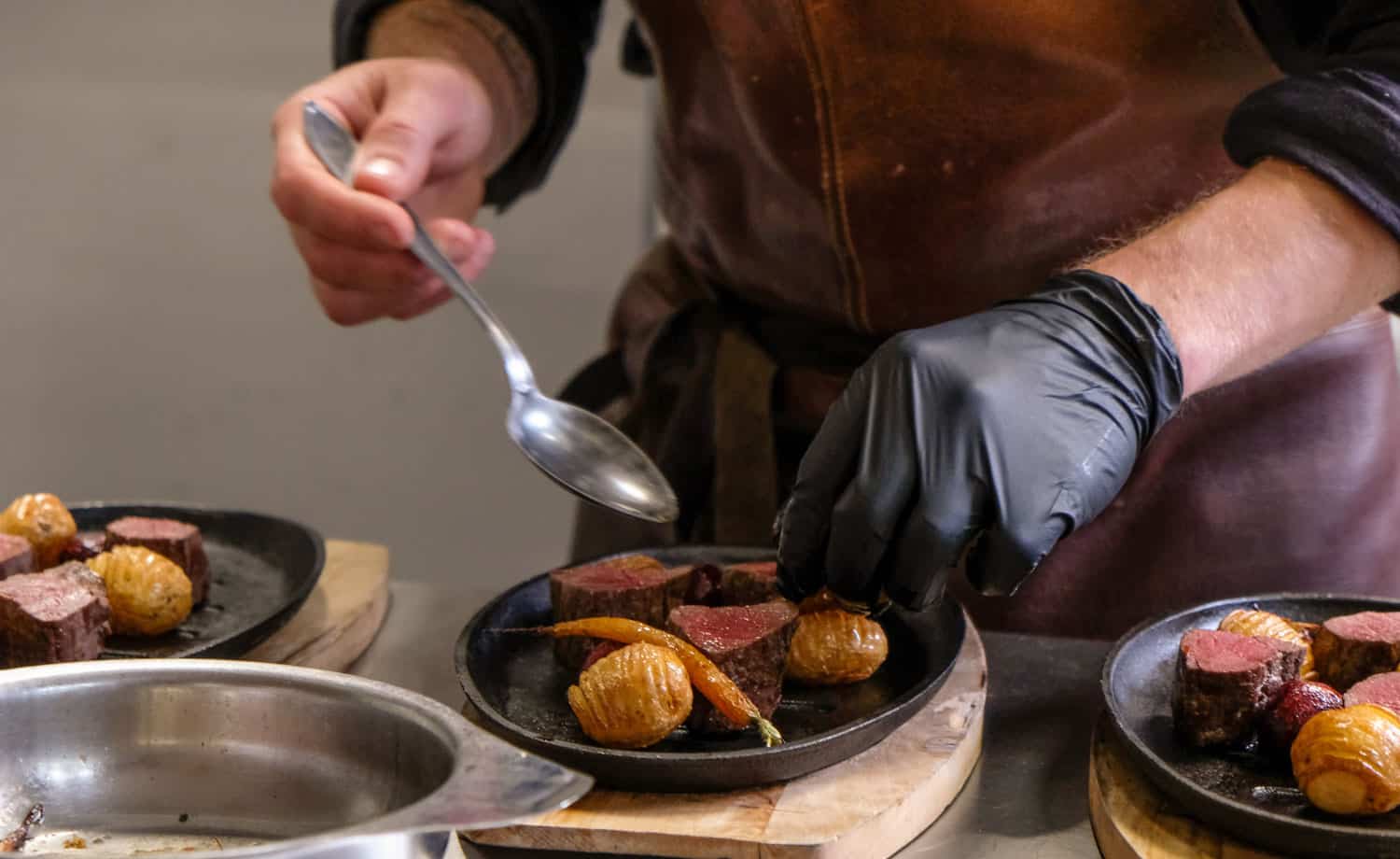 In the evening, after a day trip in the car to Jokkmokk, the Arctic Circle and the Storforsen rapids, I go back to the hotel for dinner. I only very rarely miss such important occasions. The food is from Swedish Lapland, using local ingredients. Elk, Arctic char and reindeer served with fresh trimmings from forest and land. Locally sourced to as great an extent as possible. Chef Sebastian Gröndal has in many ways developed the kitchen and set its direction. Whether you’re staying at the Guesthouse or in one of the ‘tree rooms’, the meals are a classic culinary experience. Kent stops by in the evening to greet the guests. He’s a man who keeps himself busy. I ask him which hut is his favourite. He smiles:

– No, I can’t answer that. The balcony of the Cabin used to have the highest view, ten metres above the ground. But the floor of the 7th room is at 10 metres’ height, so there you truly live among the treetops.
– But you know, the Bird’s Nest or UFO, Mirror Walls or Red Shavings. There are so many things, so much charm and character in every room. 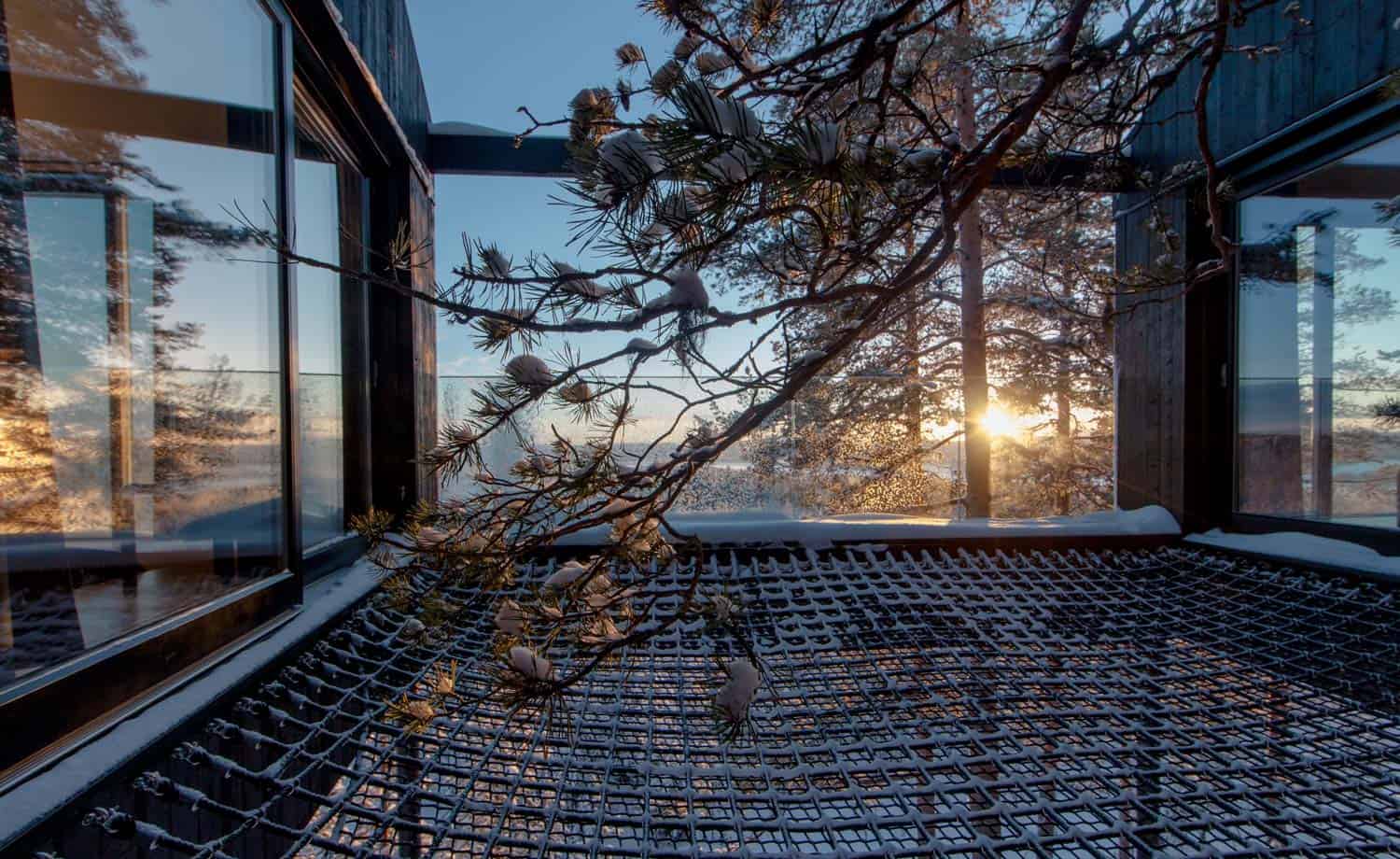 The balcony of the 7th room. Photo: Johan Jansson. 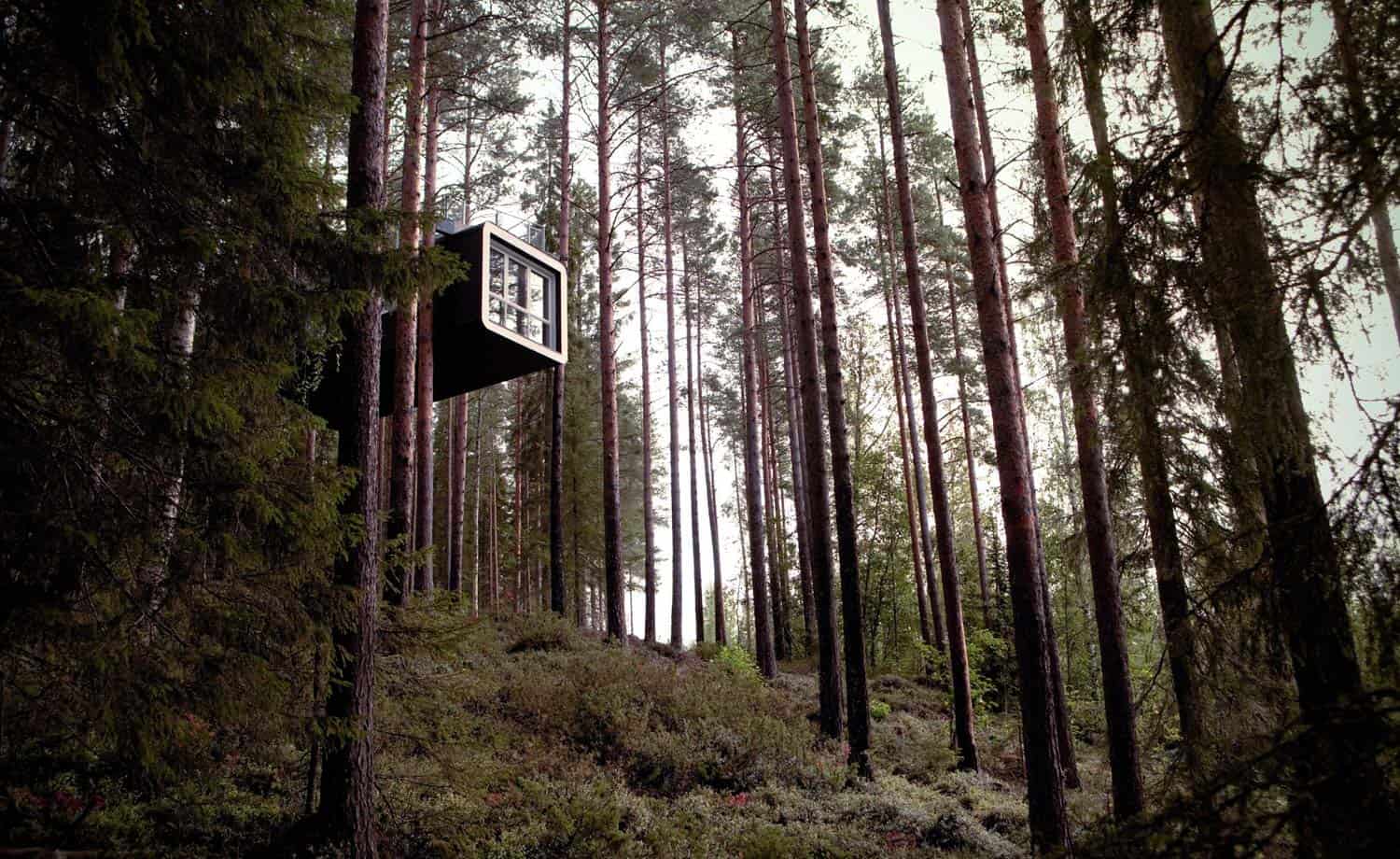 Treehotel is located in Harads, just outside of Boden, near the Lule River, about 100 kilometres from Luleå airport. The village has a population of about 600 and features a restaurant, shop and guest house. When you arrive at Treehotel, you check in at Treehotel Guesthouse. Then it’s just a short stroll through the beautiful nature to your tree room. Find out more by visiting treehotel.se.

Looking towards the future

Then I ask Kent about what’s next, of course. If there’s another room in the pipeline. His smile widens and he says it remains to be seen what the future holds. Before he leaves he says he hopes we’ll enjoy our meal and at the same time a reindeer fillet is brought in as the main course. This is going to be excellent. It’s the childhood fantasy we’ve all dreamed of, but the other way round. As a child, you’d come home after having played all evening in your treehouse, and you’d be served a home-cooked meal. Here we play outside during the day, eat and enjoy, then we sleep in the camp at night. So, on my way through the forest, en route to my designed camp after dinner, I run my hand across a birch trunk. It’s a welcoming, rough handshake from nature. Forest bathing, taken to new heights.