Places still exist where there's no point asking for the password for the wifi. Places where you leave your mobile behind to spend some quality time with others – or perhaps with yourself. The Sámi eco-lodge Geunja and the camp in Tjuonajokk are two of Swedish Lapland's finest places.

Mikael Vinka has a passion for the history of his ancestors. Even as a child the older generation saw that he loved listening to the tales they told and that he would pass on the stories and the knowledge. It’s nothing unique. Sámi history – like that of many other indigenous people – is an oral tradition. In the absence of a written language, stories were told again and again around the campfire. Mikael runs his hand along the hand-hewn timber wall of the main cabin in Geunja and says:
— In the past, two things mattered when we chose where to live. One of them sounds like pure shamanism, but the other is very practical.
— First of all, you had to feel welcome. You just walked around and tried to get a feeling for whether it would be a good location to settle, or not. You sat down and listened to what nature and the spirits told you.

Obviously, if you sit down on that hill tomorrow morning and look out over the lake, I’m sure you’ll agree this is a good spot, he says and points towards a hill by the lake.

For a city dweller who lives in the middle of a hectic age that coined the word ‘property ladder’ it might be a bit difficult to accept that ‘the spirits’ will have an opinion about whether a house is good or not. But actually, with your hand on your heart, you remember how some apartments and houses have been better than others. That some of them stay with you, but with other houses, it’s like you never even lived there.
— But the most important thing was that there was what we in Sámi call a ‘galti’ nearby, a freshwater spring. A water resource that provided cool, clean water in summer and stayed open in winter.
— We’ll wander over later – you’ll see what I mean.

When Mikael and Ann-Kristine Vinka were building Geunja, the Sámi eco-lodge, in the late 1990s, many things were taken into account. Mikael saw how many of the traditional Sámi buildings were left to rot in the Vindelfjällen Nature Reserve, the area that contains his Sámi administrative district. The area that contains his entire family history. Mikael saw that historical buildings and building methods disappeared.

In an age where freezers and cars have had a profound effect on the nomadic lifestyle, he felt a need to do something to safeguard the history and preserve buildings. Mikael understood that small-scale, sustainable tourism could be a way to finance his project. If it’s ever possible to finance a job that’s taken 20 years of your life without ever being really finished.

We walk from the main building to a proper goáhti, the first structure to be erected. It’s a Sámi hut built in the traditional way, with upright poles covered with three layers of birch bark – the bark doesn’t let water through. The goáhti was then covered with peat and soil, insulating against hot summer days as well as cold winter nights. The fireplace has a natural position in the centre, as a source of heat, a way of getting rid of mosquitos, a place to cook and to cure. Recently gathered dwarf birch is placed on the floor, creating a soft surface that keeps the reindeer skins on top dry and warm. The door of the hut faces east to let the sun in, the god called Biejvve by the Sámi, and the rest of the hut is arranged according to the goddesses of the home: Máttaráhkká and her three daughters Sáráhkká, Uksáhkká and Juoksáhkka. We have a cup of coffee without disturbing the gods.

Between the buildings, Micke and Ann-Kristine have laid out a trail of slate to follow. Partly because it helps avoid wear and tear, but also because slate shines with a light of its own during autumn evenings, so you don’t have to wear a head torch. The slate stones are taken from the lake or from the mountain on the other side of the lake. All stones used for the large fireplace also come from there. It’s insanely hard work, actually, hand-quarrying stone. But that’s the way it was done back in the day. It’s 30 degrees outside, on its way up to 31 degrees Celsius. Mikael says we’re experiencing something very much out of the ordinary. As long as he’s been here, it’s never been 30 degrees above zero in Geunja. We walk to the freshwater spring. 4-degree water all year round. I get a brain freeze as soon as I taste a scoop of the desirable, cold water.
— Yes, you can imagine how important spring is, can’t you?

Geunja is situated in the mountains of Swedish Lapland and is one of the Arctic’s best-kept secrets.
Visit geunja.se for more information.

The classic fishing camp Tjuonajokk is located by the Kaitum river. We fly in by helicopter shortly after our visit to Geunja. You don’t have to fly in, you could hike, but it saves an entire day. Tjuonajokk incidentally means Goose Creek in Sámi, so perhaps we could imagine flying in on a lesser white-fronted goose. Here, too, you will get a welcome break from your own status updates on Twitter. There might not be any mobile reception here, but it’s a place filled with warmth and hospitality, and the fishing is world-class.
— Yes, of course, you can see how confused some of our guests get when they arrive and realise they’re ‘out of reception’, Robert Hansson says.
— But then it’s like a weight is taken off their shoulders. Being on your own, being able to decide about your own time, that’s become today’s great luxury.

Robert is in many ways completely right in his analysis. New research shows that people who spend time in nature feel physically better. Hashtags such as #forestbathing, #shinrinyoku #natureconnection, #natureheals #ecotherapy and others are trending on SoMe. Out of reception has become a way to keep your sanity rather than a sign of poverty. So we go fishing, and in the bargain, we get healthier.

Tjuonajokk has been a fishing camp for nearly 40 years. Photo: Håkan Stenlund

But this isn’t about turning nature into some kind of alternative medicine. That’s not what we’re talking about. Taking illnesses seriously is the first step towards being able to deal with them. But nature has an effect, especially when it comes to reducing stress. This is why an encounter with the forest can be both preventive and healing.

In Japan, shinrin yoku (forest baths) were made part of the national health strategy as early as 1982. It was a way of disconnecting from the pace of civilization before there even was a smartphone to disconnect. What Japanese researchers saw was that city dwellers meeting the forest experienced lower blood pressure, lower blood sugar and fewer stress hormones. In large metropolises, the forest bathing trend is growing differently than it does in other places. People’s need to just get out of the house/the city for a while instead of going on an adventure is a deciding factor. Stroking a birch trunk is completely different from touching a rendered façade. One way of increasing your well-being and mental affinity with nature could be finding your favourite trees one your way to and from work. Or go away, disconnect and spend time with anything but what’s trending on Twitter for a while. Like in Geunja or Tjuonajokk.

Tjuonajokk became a fishing camp nearly 40 years ago. It actually started even earlier. Sámi Andreas Labba who lived here had a limp and was unable to move with the reindeer when they migrated. So he built himself a hut and became a permanent resident instead. Guests started arriving, and new buildings appeared. These days the camp is run by the company Fishyourdream, which apart from Tjuonajokk also operates fishing camps in Ammarnäs and on Gotland. Robert is a partner and manages the camp in summer. He takes us on a first night’s fishing downstream, by Taivekströmmen. In the rosy-pink evening light, we catch one grayling after the other. In the morning, after a few hours’ sleep, we have breakfast in the dining room. People we didn’t come across yesterday by the stream are there. We update each other about our fishing. A father and son from Switzerland ask us who won the football finals, even though the game was several days ago. We say we’ve heard France won. He looks pleased. The son also nods contentedly. The father says they’ve been here for a week and will stay for another.

— It’s the best place I know to wind down and for the two of us to spend time together. Nothing interferes. Still, everything is in order.
— And you get a lot of fish as well, the kid says and nods again.

Tjuonajokk is one of Sweden´s most famous fishing lodges. The fishing for grayling, in particular, is known worldwide. Anglers from all over the world meet to fish in one of the best grayling waters there is.
More on Tjounajokk.

There is this one hotel room that looks like a bird's nest, and another resembles a UFO. Then there is the hotel where a... 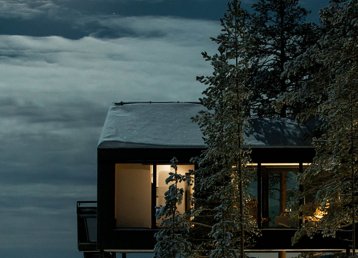 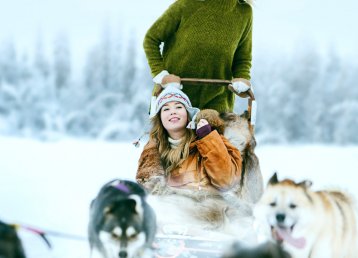