How to catch a Baltic salmon in Swedish Lapland? That’s the 100-dollar question for many salmon fly fishers. But there’s some good news. It’s getting easier. A lot easier. During the last years, salmon runs in the wild Swedish Baltic rivers have been heading in the right direction.

For a long period, the wild salmon stocks in the Baltic Sea were under a lot of pressure. When things were at the worst, the Baltics were on the fringe of extinction in some rivers. For example, in the Vindel River, in the year 1986, 302 salmons were registered in the fish counter – today it’s annually around 10 000 (which is still far from maximum production but far better). Due to strict regulations in the Baltic Sea and a lot of positive forces collaborating in favour of the Baltic salmon, more and more fishes start to re-colonize their previous habitats and make the future look bright for both salmon and salmon fly fishers in Sweden.

All you need on fly fishing in Swedish Lapland

A few years back the Torne river in Swedish Lapland experienced massive runs, confirmed by the fish counter in Kattilakoski which registered about 100 000 migratory fish both years. That’s a lot of fish, but one should bear in mind that the Torne system is unique as salmon habitat. One should also remember that the four northernmost rivers hold a handful of highly interesting tributaries like the Lainio river and Ängesån.

The Baltic salmon are known for being big.

Ok, the Baltics are starting to run in numbers, but why should you go for them? There is prime salmon fishing for Atlantics in a lot of places in the world. What makes a Baltic so special? Well, for starters the Baltic salmon is the same species as the Atlantic salmon – the Latin name being Salmo salar. But one main attraction with the Baltic is the size. They grow big. A 100-centimetre fish is, obviously, a good fish but nothing that will raise any eyebrows. A 100 centimetre can be caught in basically all wild salmon rivers in Swedish Lapland. No matter the size of the river and every year fish up in the region of 20 kilos are caught on a fly rod. In practice, that means if you hook one, there’s a good chance it’s a big fish.

Don't cut corners, in order to catch salmon frequently,
you have to put in a lot of hard work.

Calle Lundqvist is one of the most skilled salmon fishers up north. He spends his summers roaming the rivers of northern Scandinavia, and to Calle, there are two key factors on how to catch a Baltic salmon.

– The longer the salmon have been in a river the less eager they are to take a fly. This means you must be in the right place at the right time. And the right time is when most fresh fishes enter the river and while conditions are at an optimum. That might sound obvious but I think you should take it to the extreme. Sometimes it comes down to hours.

– The other thing is to get to know the rivers. That’s probably the most vital part. I don’t think you can cut corners. You must do your homework. Spend time on the rivers. Walk for miles just to check out a potential pool and always push yourself into taking that extra step out in the current, even though there’s a risk you might get wet or end up swimming. It doesn’t mean you should take stupid risks but I think pushing yourself in every situation is the best way of learning. Of course, you can ask people for advice and talk to fellow fishers, but true knowledge comes from your own experiences. To put it simply, in order to catch salmon frequently you have to put in a lot of hard work. Just go exploring, travelling around and enjoying being a free spirit.

It’s a known fact that a salmon won’t take your fly while you’re in the car. With that said, you tend to drive quite a lot while fishing the Swedish salmon rivers.

– One might presume it’s got something to do with the local tradition, formed in the days when there were few fishes and a lot of potentials (but empty) holding places in the pools.

One theory is that the pioneers in the north based their fishing on the belief that they had to track down the fish to be successful.
– Even though times and more salmon run the rivers, our style of fishing still includes a lot of mobility. But mobility also stems from the fact that fishers can move around. In a big part of the salmon fishing world, you are given a certain stretch or beat for a certain period of time. Here you’re basically free to go where ever your heart wants. There is always a new pool, a new set of rapids or a different river to visit.
– I love this way of fishing, says Calle. The roads up north are sparsely trafficked, and most of the bigger roads are in a decent shape, which means you travel quickly. If you find yourself stuck with bad conditions in Byske, the river Kalix is just three hours away, offering a completely different set of conditions.

The many rivers in Swedish Lapland makes it a treat to go wherever your heart desire.

How to fish the fly

What it all comes down to is to get that salmon to take your fly. The problem is you’ll never know when there is a “taker” nearby, which means you must stay alerted and persistent at all times.

– Don’t get sloppy, says Calle. It’s vital to make every cast count. That leader should land straight out every time. Letting the fly start fishing immediately. And I always try to fish the fly actively. Don’t just let it swing around. Move the rod tip in different positions to make the presentation exactly where you think the fish is lying.

Have you really fished the fly properly on that particular stone where you know a fish is resting, or have you just swung the fly in that direction way too fast because you quite couldn’t reach?

– Be true to yourself, and take those extra steps even though it means tough wading.

Every year thousands of salmon runs the wild rivers of Swedish Lapland, and every year flyfishers run after some of those salmons. This is one of those runs.

You’ll never know when there is a “taker” nearby, which means you must stay alert and persistent at all times.

Just like Calle, Erik Tjärner is a hugely talented salmon angler, raised by the harsh conditions in the north. For most of the time, he fishes the rivers Torne, Lainio and Kalix. Big rivers and Erik is keen on his 15-footer.

– A lot of rivers up north are big. Some even huge. My 15-foot rods are, in most cases, my go-to rod. Sure, you can go longer, but I don’t really find those long rods giving me an upper hand. It’s just when I fish Jockfall in the Kalix river. There the fishing can get quite extreme. Then I use a quite soft 17-foot rod and try to play the fish more on the rod than on the reel. I find that a softer rod keeps the fish calmer and eventually makes the fish easier to land.

While fishing the Swedish rivers in the North, it is mandatory to spey cast. The trees often grow tight onto the rivers, sometimes so tight that the situation requires a shorter rod.
– Even though the rivers are wide, you must remember that you don’t need to cover all the water. Sometimes, when the trees and bushes get too close, I bring out my 13-footer. Works like a charm, even though I might lose some reach.

A few different setups is a good strategy.

With only a few exceptions, the water in the Swedish Lapland salmon rivers is peaty coloured. That’s why colours like brown, yellow and black are hugely popular in flies. Most people also fish temple dog styled flies with a very mobile wing, often on a copper tube. Erik says he doesn’t give much attention to the fly, but that’s entirely true.

Erik’s favourite pattern is Phatagorva.
– I want the fly to have a certain look, but I don’t think there’s a magic pattern or a material that will catch more fish. I just don’t go changing flies every now and again, but stick with the fly I like for the moment. And that’s almost always a Phatagorva styled fly of some kind.

As a last reflection on how to catch a salmon, Erik agrees with Calle. Be on the river at the right time.
– My experience is that 8-10 degrees in the water make the salmon most willing to take a fly. You have probably heard that 13–14 is the optimal temperature for turning salmons into takers, but I beg to differ. Not up here. I think it has something to do with the longer a salmon dwell in a river, the less likely he or she is to take a fly.

6 tips on how to catch a Baltic

A tanked-up car, tough rod holders and a few intensely driven salmon fishers as company is a great start if you're going... 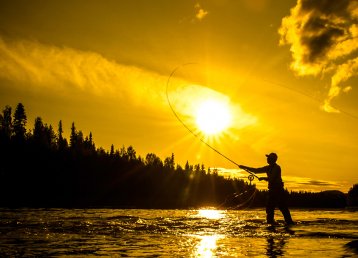