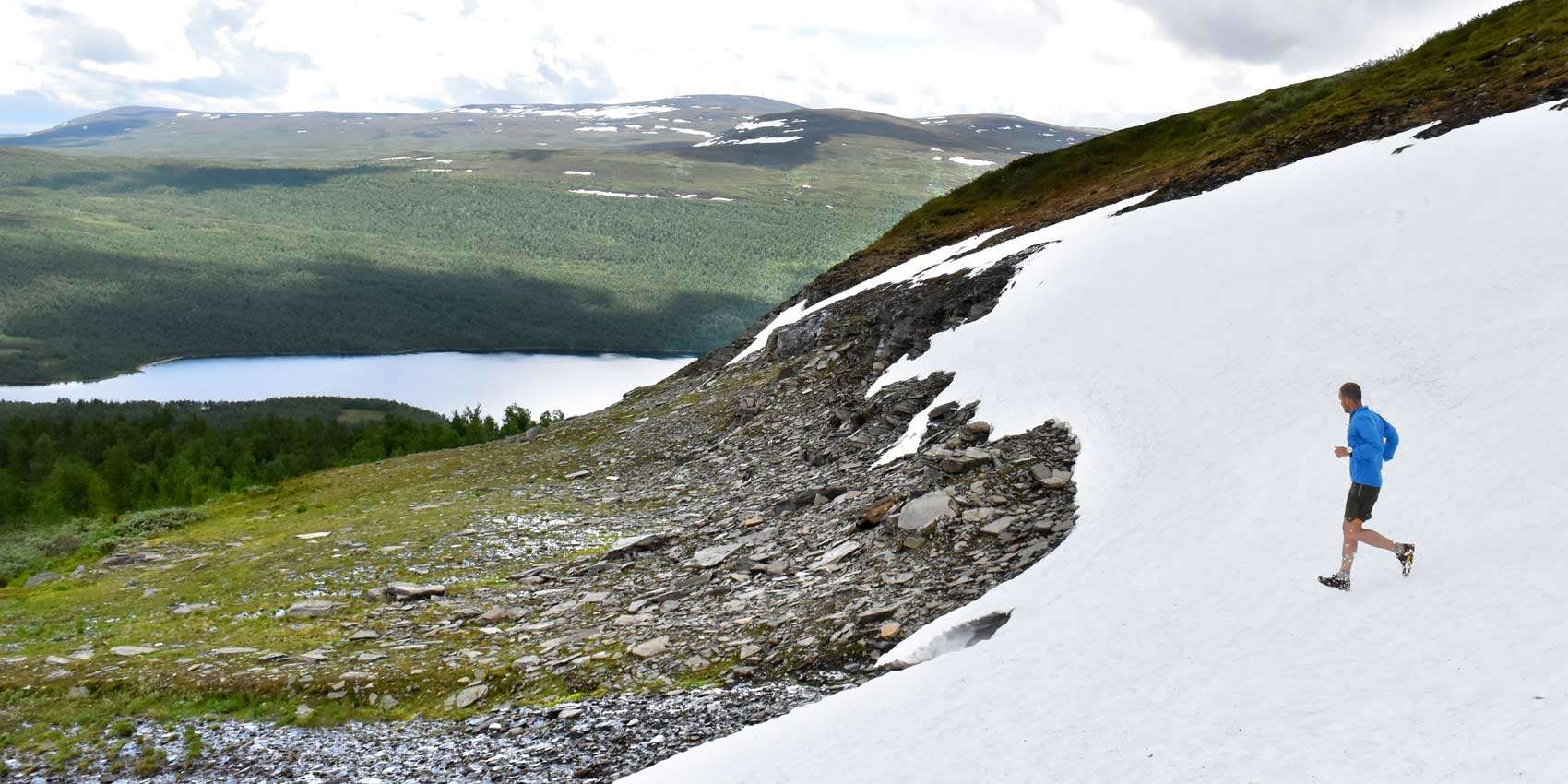 Trail running is becoming more and more popular, and it turns out that the mountains around Ammarnäs are ideally suited for the purpose.

“A summary of the Lapland mountains”, that’s a description of the Vindelfjällen Nature Reserve I’ve come across. You can find most things in those mountains: high mountain massifs, low-lying mountain birch forest, u-shaped valleys and herb meadows. The southernmost part of the King’s Trail runs through the Vindelfjällen mountains like a hiking motorway between Hemavan and Ammarnäs, and there are numerous other hiking trails to discover. According to rumours, the area around Ammarnäs is particularly suitable for trail running or mountain running: running up and down in varying mountain terrain.
– It feels like anything to do with the mountains has become more trendy, whether it’s running, hiking or MTB, you know, mountain biking, says multi-sportsman André Vollan Johansson.

André is based in Ammarnäs: this is where he lived when he was a boy, this is where he came after high school, and this is where he works as a guide. When André goes running, the trail will go uphill, and downhill. The Ammarnäs mountains are his backyard – he’s been running and skiing in these mountains as long as he can remember. He was good at it, thought the training was fun and spent time on mountains and peaks. And, he continues:
– Here in Ammarnäs, you’ll go up, no matter in which direction you go!

The view is the reward

We’re sat at Ammarnäs Guide Centre with a cup of coffee each. The sun looks down, carefully, the air is morning-cool, and André notes that it’s going to be a beautiful day for outdoor action – he’s actually taking me along with him. From Tjulträsk up towards Gajsatj, he decides, after he’s asked about my non-existent running habits and taking into account that I’ll be wanting to take photos.
– Then you’ll get up onto the bare mountain quickly, and it’s a good trail for running, he explains.
André trains and competes quite a lot. Long distances. Skiing, cross-country running, biking. Big competitions as well as small. He’s been running in a lot of places: Norway, the Pyrenees, Sicily, Portugal. The running shoes are in the bag wherever he goes; they don’t weigh much.
– The feet, that’s the main difference between mountain running and asphalt running. Mountain running is more technical. You have to look where you put your feet, all of a sudden you step in the wrong place. You have to be alert. And of course, it’s hilly all the time.
– The view is the reward, once you get up on top of the mountain. It’s nice being there on your own too. Running in the mountains is both freedom and therapy. I get a bit blind to it all since all I do is train around here, but when the weather is nice I sometimes just stop and remember how beautiful it is. It’s something I could never get tired of, he says.

The mountains in Ammarnäs are easily accessible from wherever you’re staying in Ammarnäs. Around the village, there is a trail system of about 200 kilometres in varying difficulty. There are also about 500 kilometres of trails in the nature reserve of Vindelfjällen. The season for trail running in Ammarnäs stretches from mid-June to September.

If you would like a guided trip, either trail running or on Mountain bike, get in touch with André at Ammarnäs Guidecenter.

It’s stunningly beautiful. At the beginning of the path, my senses are overwhelmed by the scent of dew-moist birch forest and new herbs. The path rises sharply, and soon we’re looking out across the peaks and valleys around us: different nuances of green, quite a lot of green actually, from moss cushions and sprawling shrubs to small trees surrounding the path. The air here is clear and light, but around the lake below us and surrounding the peaks Stuor-Ajgart and Suvlåjvve there’s a milky-white mist with sunlight filtering through. It’s surprisingly warm, but the wind blows further up.
– It usually’s windy up here, André tells me.

Along the way we cross small streams and a snow pile that André runs straight over – the surface is harder than you might think, even in summer.

Again the question why the Ammarnäs mountains are so good for running.
– Well, André explains, it’s because the mountains are running friendly. It’s not particularly wet, or rocky. There are also excellent trails to run on, especially the larger trails that are well-trafficked, he notes.
– There’s such a large selection here as well. You can run in all different directions. And the surroundings are amazing! I also like it that cars’ road actually ends here, and other kinds of roads continue – the nature reserve is enormous.

André’s favourite trails for running in and around Ammarnäs

André’s advice to those wanting to start mountain running
There are no short cuts, but the advantage of running uphill is that you get fit quickly. You can start with shorter distances, walking uphill and running downhill. If you can’t access the mountains, you could start in a slalom slope, for example.