A stay in history

Once upon a time, Haparanda was where the East met West, a hangout for spies, robbers and war profiteers. If the walls of Stadshotellet – the city hotel – could speak, we would be more than excited to listen to what went on in what once was the middle of the world.

Lenin was here. And then he went home and started a revolution. There is a blue plaque in the waiting room at Haparanda train station that tells us how Lenin, the old comrade, stopped here in Haparanda before crossing the border into tsarist Russia. April the 15th 1917, that was the day Lenin and his entourage arrived at Haparanda, en route from the Alps. Some say the Germans paid him a considerable amount of money to go back home and start a revolution, something they – in the clear hindsight of history – might have regretted. Lenin’s journey along the main railway line was eagerly followed in the Swedish press. He bought a suit in Stockholm and allegedly he stopped in both Jörn and Boden before arriving at the frozen Torne River.

April the 15th 1917, that was the day Lenin and his entourage arrived at Haparanda and checked in at the city hotel.

It might be unfair to start an article about the city hotel – Haparanda Stadshotell – with Lenin. But on the other hand, in some ways, it is impossible not to begin there. The hotel was built during an era when Haparanda constituted the western outpost to tsarist Russia. This was where the East met West, and the city was a melting pot, fuelled by espionage as well as contraband. A fifth of the city’s residents is said to have been spies and agents. As I check in to the hotel, I find it difficult to get my head around to the fact that once upon a time, this was the centre of history. But then again, there is nothing about the hotel itself, this well-preserved and classic city hotel, that would contradict that this used to be a place for the bourgeoisie, spies and profiteers to enjoy themselves. I have a feeling I will, too.

The hotel itself, this well-preserved and classic city hotel,
that was built during an era when Haparanda constituted the western outpost to tsarist Russia in the east,
and once upon a time, this was the centre of history.

I make myself comfortable in the library at Stadshotellet with a glass of champagne, thinking it somehow suits the context. The bar is called Kafé Gulasch Baronen, KGB for short, named after the war profiteers who once upon a time made the place an international melting pot. (The Swedish name for these profiteers, gulaschbaroner, translates as ‘goulash barons’.) Goods were transported to and from the Tsardom across the Torne river with classic smuggling flair. On a spring-winter day in April 1915 – or so the story goes – 286 mail bags filled with security mail, 126 mail bags stuffed with parcels, and 10,576 ordinary letters arrived, to be sent across the border. It took 160 horse rides to carry it all. There were also a fair few packages that needed to pass, or rather, just passed, the Russian border without any interference in the form of customs or duty. The people who made money on this traffic were those who were able to trade with what mattered to people: those who had access to flour, salt, snuff and coffee and were quick deliverers. In a way, the profiteers were both the DHL and Costco of their time, in one person and with their office in a pocket. They were known as deft traders who loved to show off their new money, money that would often burn holes in their pockets, and then they would visit the city hotel. A famous bar fight that people still talk about today was when the so-called King of Haparanda, Sven Unander, infuriated the Russian consul Ronkonen to such an extent that the latter pulled a gun. However, Unander quickly caught on and disarmed the consul before disposing of him in the nearest snowdrift.

Once I have finished my champagne, I take a look at the menu. Just like in the time of the goulash barons, the restaurant is excellent. Even if perhaps not as over-the-top as when the war millions rolled: the maître d’ at the beginning of the 20th century, Ernst Hägglund, served Limfjord oysters, salmon from the Rhine and partridge in his restaurant. This menu did not differ significantly from what was on offer in the most exclusive restaurants in the Swedish capital. These days, however, the menu is adapted to local produce with reindeer and vendace roe from the Torne Valley as classics rather than salmon and oysters from Europe.

The owner of the hotel, Susanne Wallin, started working at Haparanda Stadshotell when she was 16. She continued to work there until IKEA opened an office in town and needed someone with the right skillset. Then she moved to Luleå and worked for the Norrbotten Chamber of Commerce until one day, the phone rang, and Susanne answered. It was her old boss, the owner of Haparanda Stadshotell, Håkan Göthager. He said:
“Well, I wanted to ask if you remember what you once told me?”
“Yes, I think I remember.”
“Good, do you want to?”
“Could you give me a couple of minutes?”
What this translates to is that Susanne once told Mr Göthager that if he were ever to sell, she wanted him to call her first. Now she was faced with that very situation. She called her husband. He said:
“Yes, I’ve always thought that perhaps we should move back home to Haparanda.”

Chad chose Abisko
The owner of the hotel, Susanne Wallin, started working at Haparanda Stadshotell when she was 16.

One morning, before breakfast, I walk across the bridge to Finnish Torneå. Just like everyone in Haparanda and Torneå has always done, except when the rest of the world has been causing trouble. The first bridge was a wooden construction built by the manager at the local telegraph station, Karl Handolin. It was known as the Handolin bridge, and good old Handolin would charge a toll from those who wanted to cross. These days you are allowed to walk here completely free of charge. The towns Haparanda and Torneå embody the Eurocity spirit: in these parts, the river is not seen as a border, but rather something that unites. All things Finnish are taken for granted in Swedish everyday life. The very name Haparanda comes from Finnish Haaparanta, which means aspen beach. When I get to Finland, it is a lot later than it was when I started my walk. Time zones changing things around is always fun. In Finland, they celebrate New Year an hour ahead of their Swedish neighbours. Something worth keeping in mind if you like bubbles and want two opportunities to make your new years resolution.

When the First World War was about to kick off, the Widow Empress Fyodorovna crossed the river, and the train she arrived on would remain a few more years at Haparanda station. The Widow Empress came to experience her fair share of adventures and intrigues in life, including a revolution, a useless son, world war and Rasputin. Visitors also included Louise of Mountbatten and the famous Matilda Kschessinska, prima ballerina assoluta as well as mistress of Tsar Nicholas II. Kschessinska would later, in exile, marry Andrei Vladimirovich, another grand duke.

The city was filled with people who mastered Russian, Finnish, German, English, Dutch and Spanish. Not all of them wheeling and dealing. There were also English, French, German and American consulates in town. In the middle of the city – and the world – was Stadshotellet, the city hotel where successful business was celebrated. To grasp the importance of the city and commerce in the shadow of the war, a number to bear in mind is the 115,000 tonnes of goods that were transported across the river in 1915, an amount that was doubled in 1916. Naturally, an equally large share was smuggled. Precious stones crossed the Handolin Bridge in women’s high-heeled shoes, special belts concealed medical supplies, and once a funeral procession was halted. It was discovered that the coffin was filled with rubber hoses. In April 1917 the Russian newspaper Novoye Vremya stated that no less than 217 spies and agents resided in Haparanda. Not bad for a town with fewer than 1,500 inhabitants. In a way, it makes you think that “Haparanda was transformed, almost ravaged by world history.”, as stated by author Sara Frykman in her book ‘Stadens Clou’. Eyewitness Gustav Svanberg describes the hotel guests as an “amazing collection that only a world disaster could throw together – a contemporary Sodom and Gomorrah”. And at Stadshotellet the show went on, in a swirl of velvet, champagne and roubles.

The food philosophy is to cooperate with local producers.
Because things that grow in the same place tend to taste well together.
Wild game, reindeer and Kalix löjrom [vendace roe] are classics and always to be found on the menu.

I put the menu down and order vendace roe as a starter, reindeer for my main course, and cloudberries for dessert. You could not get more Arctic classic than this, and in a way, I suppose all that is missing is a pair of wide braces as I sit here trying to channel nouveau riche. I have enjoyed thinking about history, goulash barons and adventures. Lenin might have been here as part of the city’s main attractions, but these days Stadshotellet writes its own history as Susanne Wallin and her team are in the process of gently renovating it. The public salons, including Solennitetssalen, Tornedalskabinettet and the Green Salon, are revitalised with modern, but at the same time classic choices.
– We really want to keep the atmosphere that is Haparanda Stadshotell. At the same time, you have to keep in mind that times have changed and today’s needs are entirely different, so we also want to make the hotel more contemporary and comfortable.

One thing that is incredibly striking about Haparanda Stadshotell is all the public areas. Magnificent halls for conferences, banquets and meetings, but also for slipping away, sitting down somewhere to just enjoy the atmosphere, in the midst of things or on your own. Where I am sat, in the newly renovated library, I suddenly remember what Lenin wrote in a telegram to his sister as soon as he had crossed the border: “Arriving Monday at 11 pm. Inform Pravda. Ulyanov.” I, on the other hand, am in no hurry to go anywhere and there is no need for me to keep any newspaper informed about my whereabouts either. Soon they will bring me my dessert.

To learn more about this iconic city hotel or to make a reservation, go to haparandastadshotell.se.

Just outside Luleå, you'll find the church village Gammelstad. This used to be where Luleå city centre was located right... 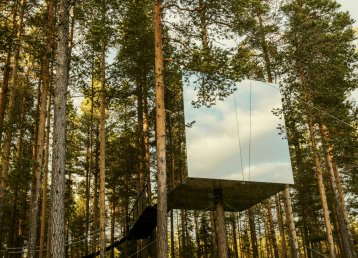 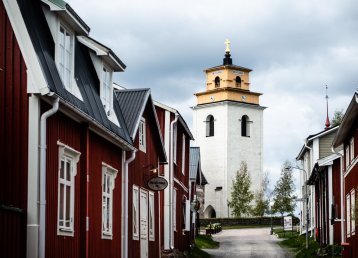