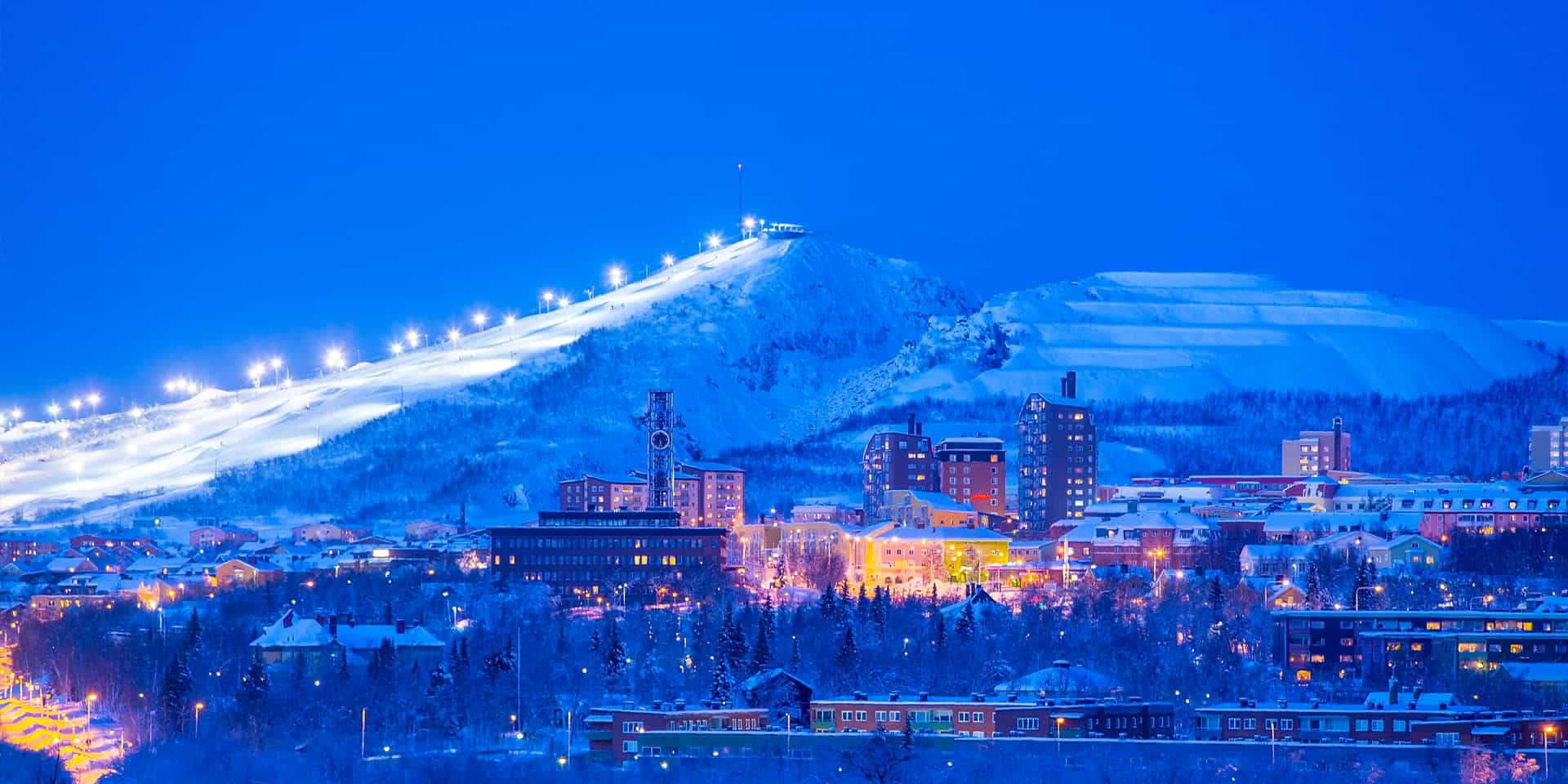 You might think that in the Arctic, we have darkness or daylight. In the winter, the sun never rises above the horizon, and in the summer, the sun never sets. But in fact, we have light all year round. Just different kinds of light. Some darker, some brighter, and some very colourful.

If you translate it directly, Kaamos means – darkness. But those who live in the polar regions know that’s not the case. It’s how the snow magically reflects blue light; Kaamos is the word used for this particular light phenomenon. Call it the blue hour, or the blue light, around and above the Arctic circle in December and January. Sometimes from 10 o’clock in the ‘morning’ until three in the afternoon, there is daylight. If you look north, the sky is blue. But if you look south, there is a blush along the horizon, coloured by the sun. Around two o’clock every afternoon, and for about fifteen minutes on a clear day, there’s a strange phenomenon that we can call the blue moment. Everything, the snow-covered landscape as well as the sky, is illuminated by a special, magical blue light. This natural phenomenon only occurs in the Arctic and can’t be experienced anywhere else. 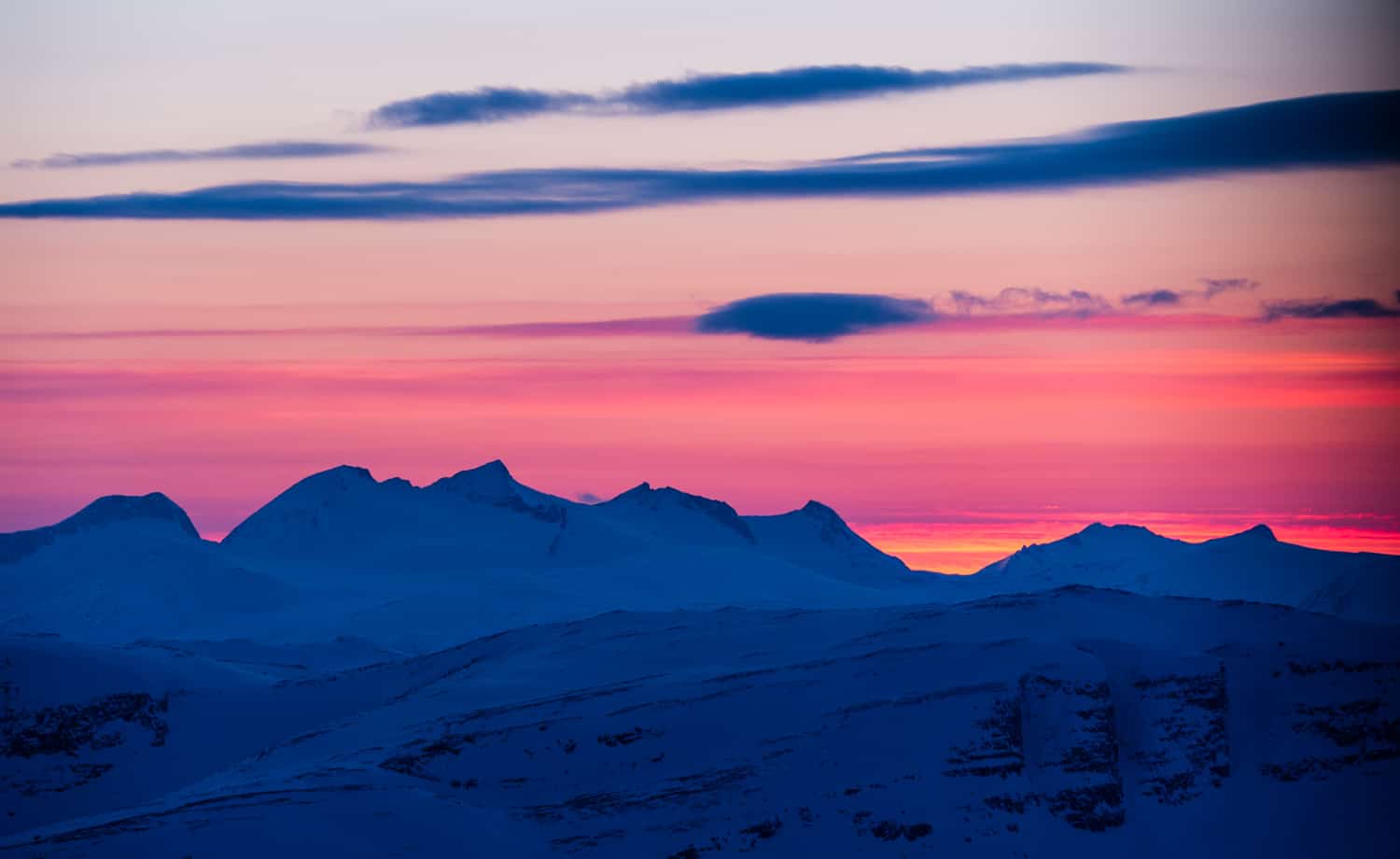 In May, the midnight sun arrives at Riksgränsen. But before these white nights, we get some truly spectacular sunsets. The old saying goes “Red at night, shepherd’s delight; red in the morning, shepherd’s warning”. And the Swedish Meteorological and Hydrological Institute have actually proven that there is a greater risk of rain on days preceded by colourful dawns, and less chance of rain the day after a beautiful sunset. The red colour is a result of the distance between the sun and the Earth; the shorter blue and green light waves can’t reach us, only the longer red waves get through. Apart from the afterglow you also get a phenomenon up in the mountains that is similar to what you’ll get in the Alps: Alpenglow. The mountains and the landscape are brightly painted by sunset itself, of course, but when the sun no longer illuminates the entire landscape, the red and pink light stays on the highest peaks. A kind of a third stage of Alpenglow that the Germans call Nachglühen occurs half an hour after sunset when the light from the sun is reflected back down onto the mountain peaks. 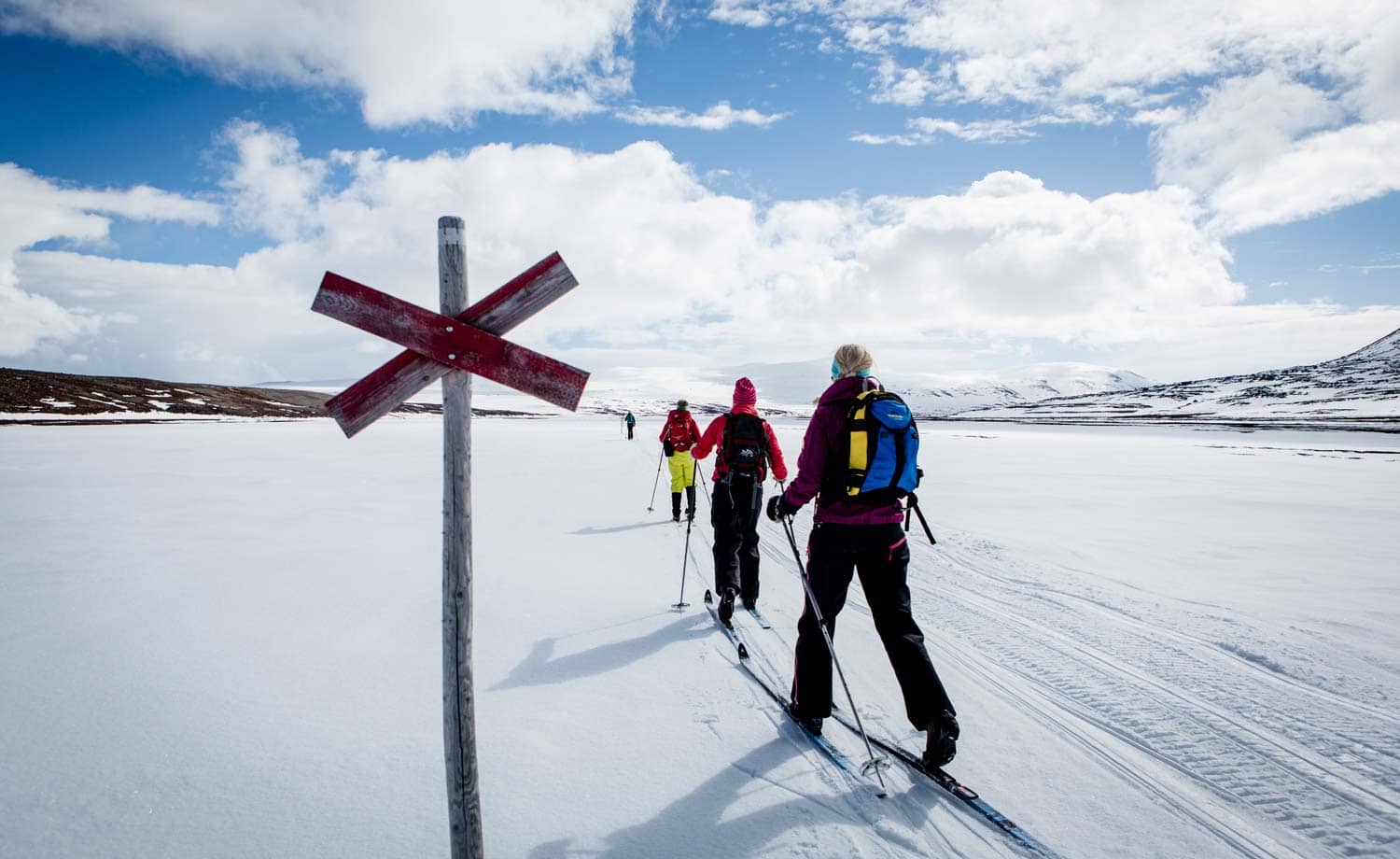 Spring-winter in the mountains is a favourite among the locals. Photo: Carl-Johan Utsi.

No one in Swedish Lapland minds when the green and blue part of the sunlight suddenly reach our part of the world in February and causes the first drops of melted snow to trickle and fall from the rooftops. Between December and January, the sunshine doesn’t fall in the necessary angle against Earth to provide the Arctic with blue and green, the short-wave light. Instead, we carry out our daily Arctic life in continuous dawn or dusk (possibly depending on your mood). But from February and onwards everything changes and you can even feel the warmth of sunlight against your jacket. You see: the sun changes the snow, creating crystals and snow crust out of freshly fallen snow. There’s actually no more beautiful time to go up into the mountains or visit the archipelago than during spring winter. Whether you go skiing or drive a snowmobile or sit on a reindeer skin ice fishing, you’re now enjoying the sunlight. But nothing good that doesn’t come with a warning: please don’t forget your sunscreen. Sun combined with reflective snow creates a natural sunbed – a solarium 2.0. 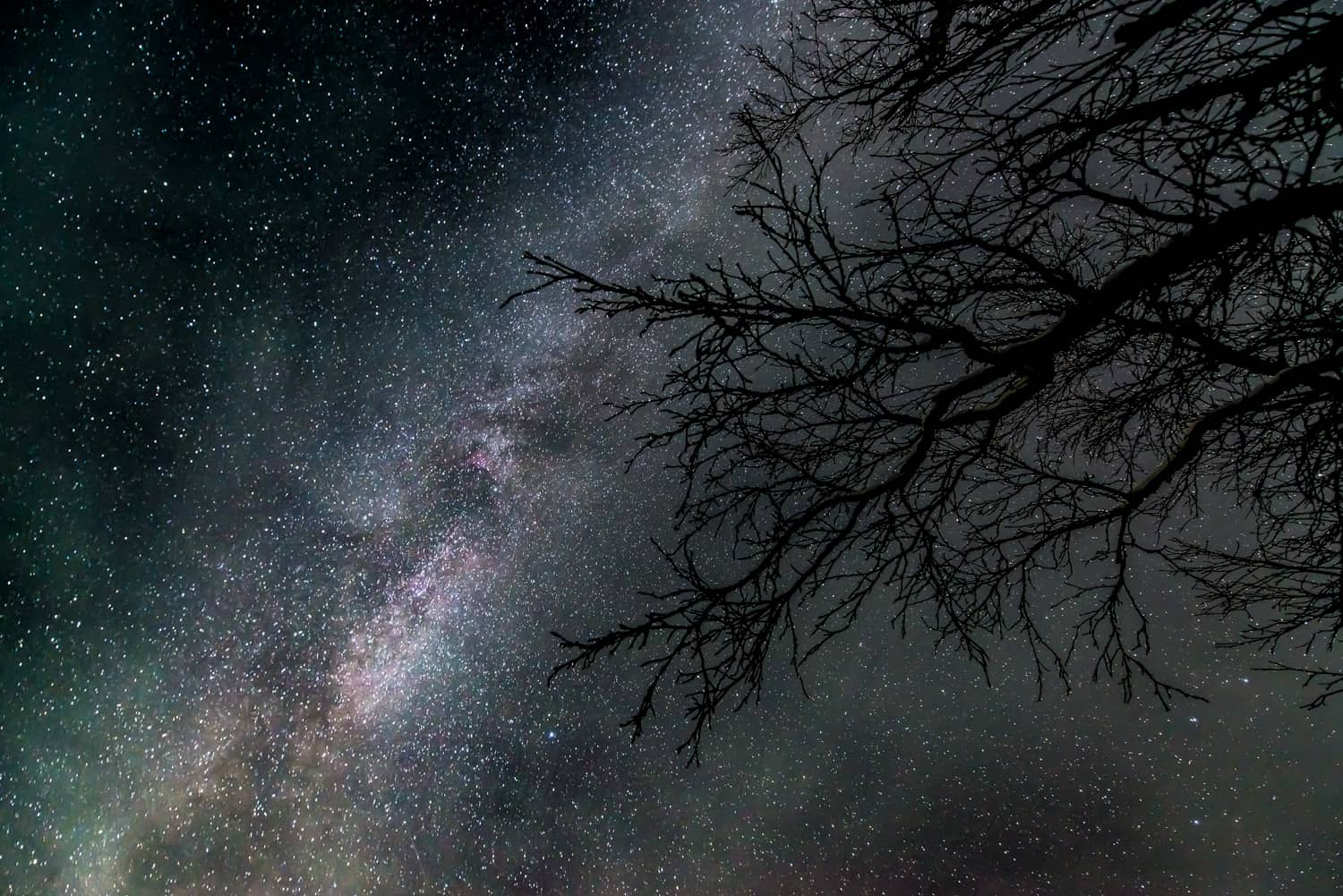 To capture the magic of the starry sky – and perhaps the Milky Way in particular – has become a challenge for many photographers, professionals and happy amateurs alike. But you don’t need a telescope for your photos of the stars. And astral photography isn’t about creating something that looks like the LSD-influenced album sleeves of the 1970s, even if the phenomenon sometimes is genuinely spectacular. What you need is a clear night, a lack of disturbing lights – the exact same ingredients as when you take photos of the northern lights – a tripod and a camera set for 30 seconds with your lowest f-stop. You can’t always see the Milky Way clearly in the sky, so you must know where to aim the camera. And of course, it doesn’t hurt if you know how to tweak the image in Photoshop afterwards. Because even if the galaxy contains a couple of hundred million brightly shining stars, the image of the Milky Way won’t be a shining neon line across the sky without help. 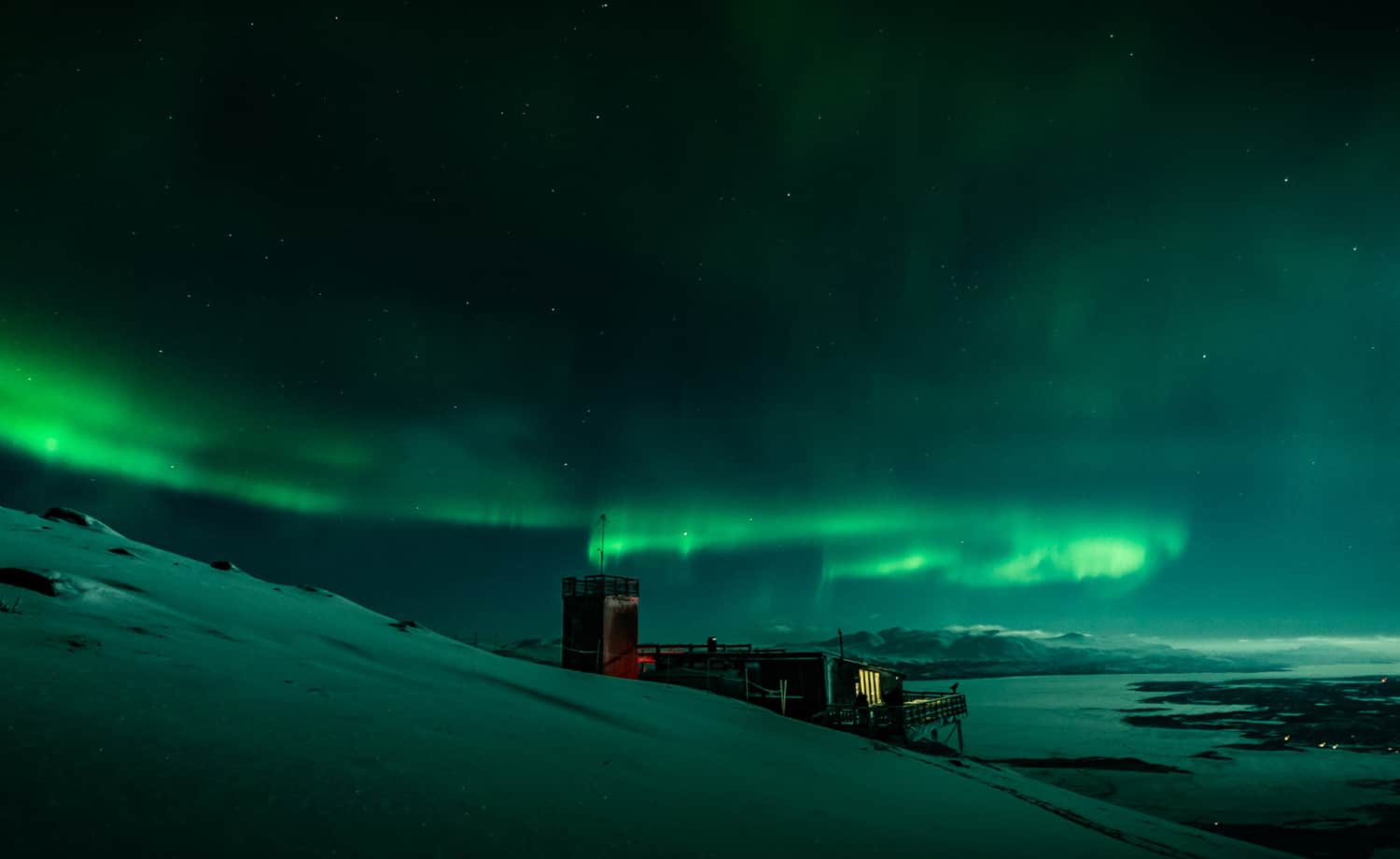 Aurora Borealis – a greeting from the sun

The Italian astronomer Galileo Galilei gave the northern lights their Latin name: Aurora Borealis. Aurora was the Roman goddess of dawn. Once, Aurora fell in love with a mortal man: Tithonus. As he got older Aurora grieved and pleaded with Jupiter to grant Tithonus eternal life. Aurora’s wish came true, but she had forgotten to ask for him to stay eternally young. Instead, Aurora’s great love became a grumpy old man, who would live forever. Borealis comes from the word Borea, the Greek word for the northern wind. The god Borea was not easy to handle, often associated with wild horses, untamed and with a terrible temper. In short – the perfect messenger for a cold northern wind. Somehow Galileo really hit the nail on the head when he named this beautiful celestial show after two gods: light and untamed strength.