Ski touring in a World Heritage

The road to Ritsem through World Heritage Laponia is probably one of the most beautiful roads in Sweden. It is also an easy way to get straight to a high-mountain environment with fantastic opportunities for ski touring. The mountain Nieras at Stora Sjöfallet is an amazing and easily accessible ski touring gem.

The road winds its way through the southwestern parts of World Heritage Laponia, through a landscape sculpted by the latest ice age. Everywhere you look reminds you of the great geological forces that have affected the landscape. This is also where the Sámi have lived and cultivated the landscape for thousands of years – cultural traditions that are still alive today. Travelling along the road called ‘The Road West’ among the locals is to travel in several dimensions – remember that it is also Sweden’s longest dead-end.

It's important to have good equipment and to keep track of each other when ski touring in the mountains.

Stora Sjöfallet and the mountain Nieras

The mountain Nieras rises mightily at Stora Sjöfallet with several peaks of between 1,400 and 1,600 metres. This mountain is a gem to ski touring enthusiasts and has been known to local skiers for a long time. Partly because the road to Ritsem makes it easily accessible and partly because there is good accommodation to be found nearby, both Stora Sjöfallet and STF Vakkotavare – it’s basically ski-in, ski-out. From some of the peaks, the difference in height down to the valley is more than a thousand metres.

What makes Nieras unique is not only that it is an easily accessible ski touring mountain, but also that it is located in Stora Sjöfallet National Park, part of UNESCO:s World Heritage Laponia. From the slopes, you get wonderful views of the pointed peaks in Sarek National Park, Sweden’s highest alpine area. To the west you can gaze at the mighty two-thousand-metre mountain Áhkká, towering like a giant. Áhkká, meaning ‘the old lady’ in Sámi.

World Heritage Laponia is the largest area in the world where reindeer husbandry with seasonal relocation of reindeer is carried out. Every summer the Sámi herd their reindeer to summer pastures in the mountain region and archaeological source material provides evidence that people populated the Laponia area as far back as 6–7,000 years ago. The early hunter-gatherer populations hunted reindeer and lived off nature for a couple of thousand years before the reindeer were domesticated some 2,000 years ago.

Laponia consists of the national parks Sarek, Stora Sjöfallet/Stuor Muorkke, Muddus/Muttos and Padjelanta/Badjelánnda as well as the nature reserves Sjaunja/Sjávnja and Stubba/Stubbá. To many, the landscape might look like a wilderness, but it is, in fact, everything but. To the Sámi living here, it is an ancient cultural land that has been cultivated for thousands of years, and that combination of natural values and cultural values forms the basis that the world heritage rests upon.

Anything but wilderness
Touring is a nice group activity.
Nieras offers fantastic April weather this day.

Ski touring on Nieras is skiing in a very special environment. In a national park, in a unique world heritage site. Only reindeer herders are allowed to drive snowmobiles here, and despite some infrastructure connected to the road and the power plant dams in the upper Lule River, a sense of silence and calm quickly makes itself felt. From the tourist facilities at Stora Sjöfallet the tour begins through a magical mountain forest in Soldalen valley before crossing the tree line. The most common route is to continue up towards Gárranistjåhkkå and follow the flatter ridge towards the Nieras peaks. The slopes towards Peak 1421 can be avalanche prone, so follow the flatter sections and the ridge.

You can also start from STF Vakkotavare, the Swedish Tourist Association’s mountain hut located just off the road about 10 kilometres north of Stora Sjöfallet. From the mountain hut, you follow the King’s Trail for a few kilometres north before heading across the slopes south towards Nieras. It is a very pretty, fairly straightforward route that gives you a nice view of Áhkká in the west and the pointed peaks of Sarek in the south.

When? The best time is April–May.
Where? You can start from Stora Sjöfallet or Vakkotavare.
Equipment? Safety equipment with avalanche transmitter, shovel and probe. Navigation equipment with map, compass and GPS. Spare clothing, e.g. a light down jacket, something to eat and drink.
Optional equipment? Modern, lightweight alpine ski touring equipment with climbing skins is what most people go for.

Ski touring in this environment can be a daunting but fantastic experience.

The best time for ski touring in the area

When visiting the area, it is important to keep in mind that this is an Arctic high-mountain area located 100 kilometres north of the Arctic Circle. Days are short in January and February, with temperatures that can drop to minus 30°C. In March the sun starts to reappear and it could be absolutely lovely, but the best time to visit the area for ski touring is during the months of April and May. The weather can be amazing with lots of sunny days and the snow cover is usually a lot more stable than at the beginning of the season.

Also, remember that these are wild mountains. There is no ski patrol here securing the slopes and help is far away in case something happens. Being well prepared and carrying safety equipment with avalanche transmitters, shovels and probes is a must, plus navigational aids such as map, compass and preferably a GPS. The weather can be temperamental and if visibility gets poor you have to be able to get down safely. Never go on your own, travel in a group. Never all ski at the same time and respect the slopes and the exposure.

Laponia Adventure based in Jokkmokk organises tours, assist with planning and has equipment for rent. Learn more by visiting laponiaadventures.com.

After a day of ski touring, everyone’s legs are tired. In Stora Sjöfallet you can enjoy a comfortable stay and reflect on the day after a sauna whilst enjoying a tasty dinner prepared with local ingredients, sipping on a beer from a local craft brewery. At times like these using a phrase like the quality of life comes naturally because there is definitely something special about this place: the unique nature, Stora Sjöfallet National Park, World Heritage Laponia, the proximity to the high peaks of Sarek, the living Sámi culture. Quality of life.

The king of all trails 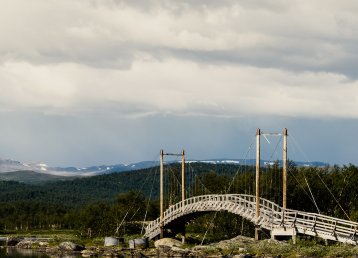 The king of all trails