When the rest of Sweden prepares for spring, Björkliden and Riksgränsen open for the winter season. Håkan Stenlund goes north to the playground of the fanatics.

“Thank you for this weekend”.
“Thank you. It’s always fun to experience something that’s better than it really is”.

Outside Hotel Riksgränsen two friends thank each other for the nice company during the opening weekend at Gränsen. ‘Better than it really is’ refers to skiing. When the mountain opened on the Friday, covered in ski boot-deep powder utterly unaffected by the wind and with clear blue skies, a surprisingly low number of skiers were at the ready.

The Swedish mountains are rarely straightforward: cold snow from top to bottom and not a trace in the snow from the wind. Conditions where snow has fallen as restrained and quietly as a young lover wondering whether to try their luck or not. You can always hope that something will work out. But it doesn’t always end up being better than what you’ve been dreaming about.

At the top, all you had to do was to point the tip of your skis down towards the Norddalsliften ski lift and just ski as much as you could. The first go runs along a safe and well-known line. The second, third and fourth lines we work out from the lift. The lines get more and more demanding. This is a proper mountain, with snowdrifts and grooves created by the ever-changing weather. Just because you came here in May last year doesn’t mean you know the mountain. You move to a line nearer the Solliften ski lift. But when other skiers turn up en masse, you choose to go down the main face towards the hotel.

‘Uffes Vägg’ and ‘Branten’ are closed, probably due to avalanche danger. But the classic ‘Rimfors’ is covered in powder. Halfway down, you have time to reflect on the fact that the old geezer Olle Rimfors, who gave the run its name, probably would have liked this. This was why he and all the rest came here once upon a time. They started the first skiing school in Sweden and did front somersaults using poles on their two-metre wooden skis. It was to Riksgränsen all the fanatics came to ski. There was enough winter here to go round.

Half a day later it’s time to climb up to the top of Norddalsfjället. The run towards Sadeln looks impossibly inviting. This time you don’t mind that much that you’re not the first. When you’re climbing a trail, it’s always nicer if someone has gone first; it’s not like when you’re heading down the mountain.

Back at the hotel, you enjoy the après-ski and make the necessary updates on Facebook and Instagram. You know that you’ve experienced a day that theoretically perhaps couldn’t exist. A day that’s better than it should be.

Riksgränsen, highest and furthest, has always been for the fanatics: for those who like to be cold and to sweat.

A place for fanatics

Riksgränsen, highest and furthest, has always been for the fanatics: for those who like to be cold and to sweat. For those who don’t care about frozen fingers or toes. Those who are as happy walking up to the top for an extra run as using the ski lifts. Those who live in a tent at the caravan park or who have made it in life can stay at the hotel but are still living at the caravan park in their minds.

Riksgränsen is for the true skiers, the ski bums, those staying the season, the kids. Those that know their time will come. Because fanatics and people on the margin have always been looking north, you want to be there, on the margin. It’s where you come to terms with who you are and who you want to be. Everything falls into place when you’re on skis.

There's enough winter to go around, all the way until the end of May (or June, depending on weather). Photo: Mattias Fredriksson

Most of us come here in spring. Some get the boat out, or the golf bag, but others resist and remain on their boards and skis. But it’s still during winter you best understand the enthusiasm and joy of skiing. During winter, you’re able to say that it was ‘better than it really is’. So I come for the opening week.

The first day is absolutely magical.

I have had one other day like it in the Swedish mountains during my 30 years of quite intense skiing. My friend Mange says that he’s had perhaps three days, but then he’s parked his caravan at Riksränsen. We’re talking days when the snow lies as deep as your ski boot, cold and dry from first to the last turn on the slope. After the opening day, we get a day with paler light, but then the Sunday welcomes us with bright sunshine again and fantastic skiing on proper snow. After that, it kicks off: every morning is nice and clear, but it starts getting windier towards the evening. Four days that week are so windy that the E10 road is closed at Björnefjäll and Björkliden. Fresh snow is falling, and old tracks are covered.

On Friday, a week after opening, it’s as good as on that first day again. That day Uffes Vägg and Branten are both open from the start. But during the years I’ve become less keen to tempt faith. So when the others bust the snow bridges on Branten, I choose Keps and Rimfors instead.

It’s still better than it really is.

Living in a dream 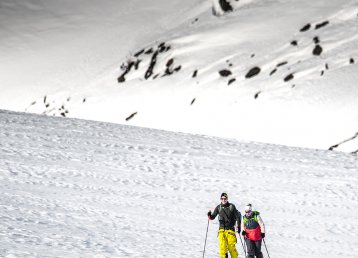 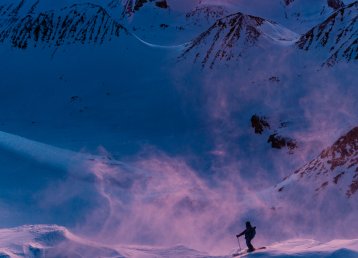