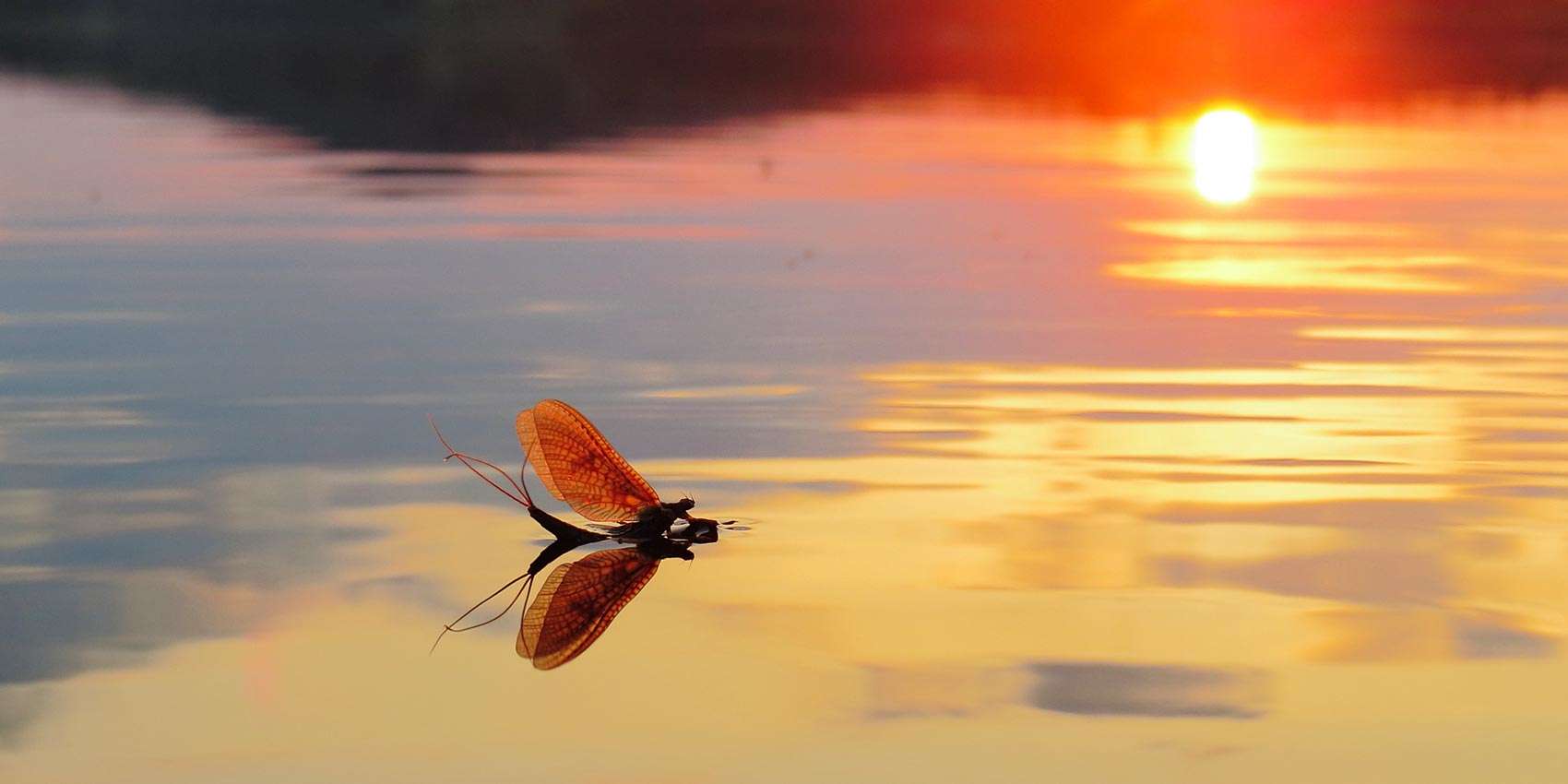 One of nature’s most beautiful displays takes place during a couple of weeks every summer. A mayfly called Ephemera vulgata hatches, and every single fish in the lake go crazy when presented with such a feast. For us fly fishers, this is simply the time when we cease to sleep.

My own snoring wakes me up in a float tube on lake Sobbträsk in the Gargnäs-Råstrand fishing area. It’s just before seven on a Tuesday morning, and I’m due in at work soon. I’m sure it’s ok if I take a power nap, help my weary brain with a little microsleep. I had been here since eight o’clock last night. I’ve been ashore a couple of times. Once on a little island to make a fire, have some coffee and food, stretch my legs and drink water. A lot of water. But now I’ve fallen asleep from sheer exhaustion. And not just because the fishing was great last night, exciting, more because the fishing has been going that well for several days that sleep has been something to consider for later.

I’m no big fan of lake fishing. I grew up by the river. I’ve been fly fishing my entire adult life, around the world, by flowing water. But for a couple of weeks every year, I go home to Sorsele to enjoy this almost mythical spectacle. Because when the large mayfly Ephemera vulgata hatches, all living creatures in the lake go absolutely stir crazy. Five-kilo trout that you never see unless you would go bottom trawling, start eating insects on the surface. Fly fishers can improve their personal best for a number of fish. My friend Jimi caught a three-kilo whitefish one day and a twelve-kilo pike the next. Both on a hand-made imitation of Ephemera vulgata. But Jimi also caught a really big arctic charr and a large trout, and later on, in this story, he will catch a silvery trout weighing in at three and a half kilo, in lake Svergoträsk.

The first vulgata hatched last Friday. I saw a friend put up a photo with the caption: “They are here now”. I was at work. I had a scheduled meeting that dragged on. I got a migraine. A quick walk down to the pharmacy to buy migraine tablets, then home to my apartment to find the darkest room, and there – in my mind – I saw the voracious trout at a table laden with food. Gluttony of the fearless right in the middle of nature. I instantly felt better, called my boss and said I needed to take some compensatory leave, then I packed the old Merc and drove inland. I inflated the float tube at the petrol station in Arvidsjaur; it took up the entire back seat. I bought nine litres of mineral water and plenty of sausages to barbecue. I already had matches and a penknife in the car – a tub of Johnny’s mustard, some bread and coffee, a lot of coffee actually. You don’t have to make it more complicated than that. But of course, you can also make it as complicated as you want – especially if you’re not a fan of chorizo for breakfast, lunch and dinner.

The first vulgata hatched last Friday. I saw a friend put up a photo with the caption: “They are here now”.

“Blown seed on wide waters… dragonfly shy of the night”, Karin Boye wrote in Lilith. That’s how you see them in the evening twilight, floating on the glassy surface, like blown seeds that have fallen. They certainly look tasty to the trout underwater. Otherwise, they’d never go as mad as they do. Normally timid, they lose all sense and start gorging themselves with all they can reach. We fly fishers provide hand-made imitations and hope. It’s exciting fishing. The arctic charr biting in a line heading towards me. First 40 metres away, then 35, then 28, then 25, and then… I suppose it turned off. But then it turns again and approaches, lightly evasive. The arctic charr bites at 25 and 20 metres. Moves from eleven o’clock to ten o’clock. I cast a fly at 15 metres and only seconds after I see the fly slowly getting sucked into the mouth of something big. I strike back and can feel how the rod tightens all the way down into my stomach muscles as it pulls away. The reel starts paying out metres and metres of backing. But after a while, I catch the arctic charr in my landing net. I know this is what makes paddling around worthwhile — 1.9-kilo pure beauty in the net.

I glide towards the island in the middle, making sure I’ve brought the water bottle in one of the float tube’s side pockets. Paddling with your legs, using flippers to help, wears you out and if you don’t drink enough, you can easily get cramps. It’s a terrible experience even when you’re not sat in a flotation device, and absolutely horrible when you’re stuck inside one. My friend Biggo – the name indicates he’s not a small guy – went fishing one day. He’d forgotten to bring water. After a while, his thigh cramped so hard Biggo thought it was a blood clot. He tried to paddle back with the leg that still worked, but it cramped up as well. A neighbour heard Biggo’s cries of pain, figured it was a blood clot, and threw himself in a boat. Once out there he threw him a rope and towed the big guy to the jetty.

I glide up behind the dentist’s house in the village. He’s here for the third night in a row. There’s a lot of fish biting around us, but not close enough. The dentist says:
— When it’s like this, it isn’t easy to know whether to paddle towards them or just sit and wait for them to come.
— I know. Unfortunately, I’m not very patient, so I usually paddle, I say.
— Yes, I’m the same. And the only thing that happens is that once you get there, they stop biting and start again exactly at the spot you came from.
— If that’s not fishing, I don’t know what is.

Then suddenly Jimi shouts. He’s in a boat further out, and now his rod is folded double, and the line cuts through the surface, making it fizz.
— That doesn’t look too shabby, the Dentist says. And it isn’t.
About five minutes later, Jimi collects his largest fly-caught trout ever with his landing net. Slightly over 3.5 kilos. Jimi grins from ear to ear, and the trout glitters like silver in the sunset. I manage to add some pictures to my memory card before I re-focus on my own fishing. Fishing that somehow seems to have stalled, but I still love being out here. Another boat slips up next to me. Film-maker Rolf Nylinder says hi and asks how it’s going. I tell him as it is: “Nothing. Nothing – so far”. Rolf tells me he went to lake Sobbträsk yesterday. That it was good there too. So I decided to give it a go. Decide it has got to be worth trying something different. I arrive eight at night. It’s biting healthily. I catch two straight away, and then it levels out. Twelve hours later, I wake up in the middle of the lake. Woken up by my own snoring. It doesn’t matter, because a fish is biting 20 metres away. It moves from 11 o’clock to 10 o’clock. I make a 17-metre throw. Here we go again, even if I should probably be at work.