The author and fly fisher Gunnar Westrin feel most at home in the most barren of landscapes. This is how Sandåslandet north of Kiruna became one of his retreats in life.

I often think about the fishing spots I’ve chosen in life. In the beginning, it was a narrow sphere with the wilderness of my childhood as the obvious centre of my universe. Nowadays I’ve come to the conclusion that that particular area was larger than the collective worldview. But everything was about to change. My first fishing trip to Sandåslandet was in the summer of 1971. After something that could be best described as a bureaucratic wrestling game, I was finally able to pack my things and head for Kiruna. The thing was that the stream I’d chosen for my fishing experience was Sami waters at the time. Applications were necessary and made to the county administrative board in Luleå. That’s where you wrestled. The reason for my first trip wasn’t just fishing – it was botany as well. 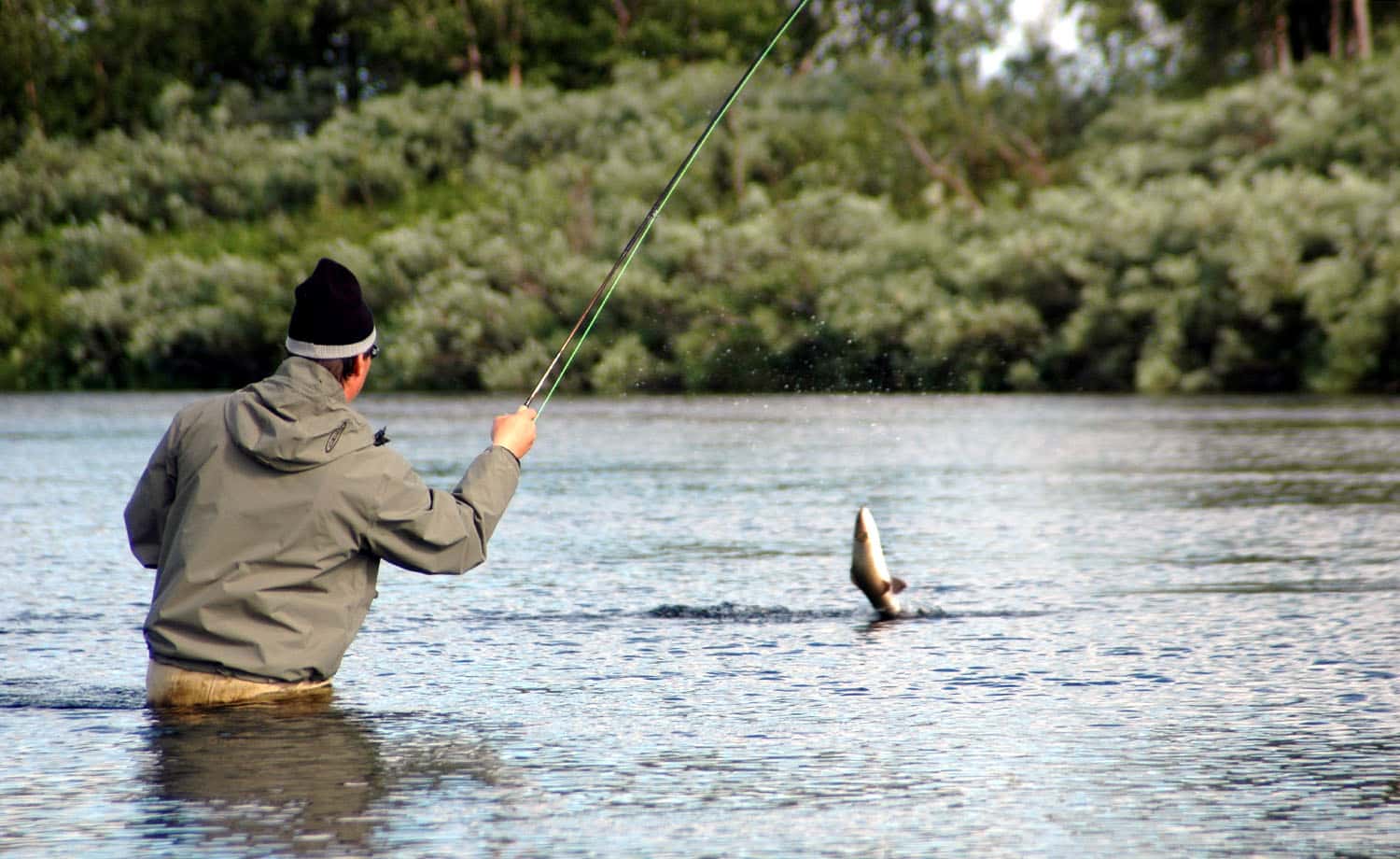 The way into the wild

My way into the wilderness has always been bordered by flowers, but never without a fly-fishing rod. Naturally, I was delighted by the sandy landscape up north: barren, windy and featuring a noticeably, insistent silence. These days, many years after that first time, we note that the name Sandåslandet didn’t exist. Back then it was referred to as ’the northern triangle’. The inspiration for my trip, apart from the flowers, was a book I’d read: The Lone Wanderer Carsten Lorange’s classic Fluga i Vildmark (only in Swedish, ed.). Some similarities struck me. From the pictures in the book, I could see that we were camping in the same area, around the distinctive mountain Sandberget. Carsten was also as surprised as I was when the first proper grayling took the bait. During that first trip, what was most captivating was how the level landscape afforded me a brilliant view without having to ascend hills or mountains. A little sandy ridge was all it took to reveal new secrets. Since then I’ve tried to visit these sandy heaths every summer – even if it hasn’t always been possible.

“A little sandy ridge was all it took to reveal new secrets.”

Around ten years ago, my friend Peter and I arrived at Vinjak for the first time. As we’ve spent time among the streams my friends and I have ended up naming many unforgettable fishing spots such as Loodhstryket, Westrinudden, Purpurselet, Vargströmmen, Vinkelforsen, Storsandselet, 3G, Rydhströmmen, Storharrselet, Mickey Finnströmmen och Vinjak.
My friend Peter and I came to Vinjak ten years ago, or maybe more. Vinjak is our name, and I’m sure others have named their favourite places differently. The spot basically consists of one long stretch of tranquil water. We were about to have our fill of large grayling, and it was a strange, deep part of the stream that brought us ecstasy. 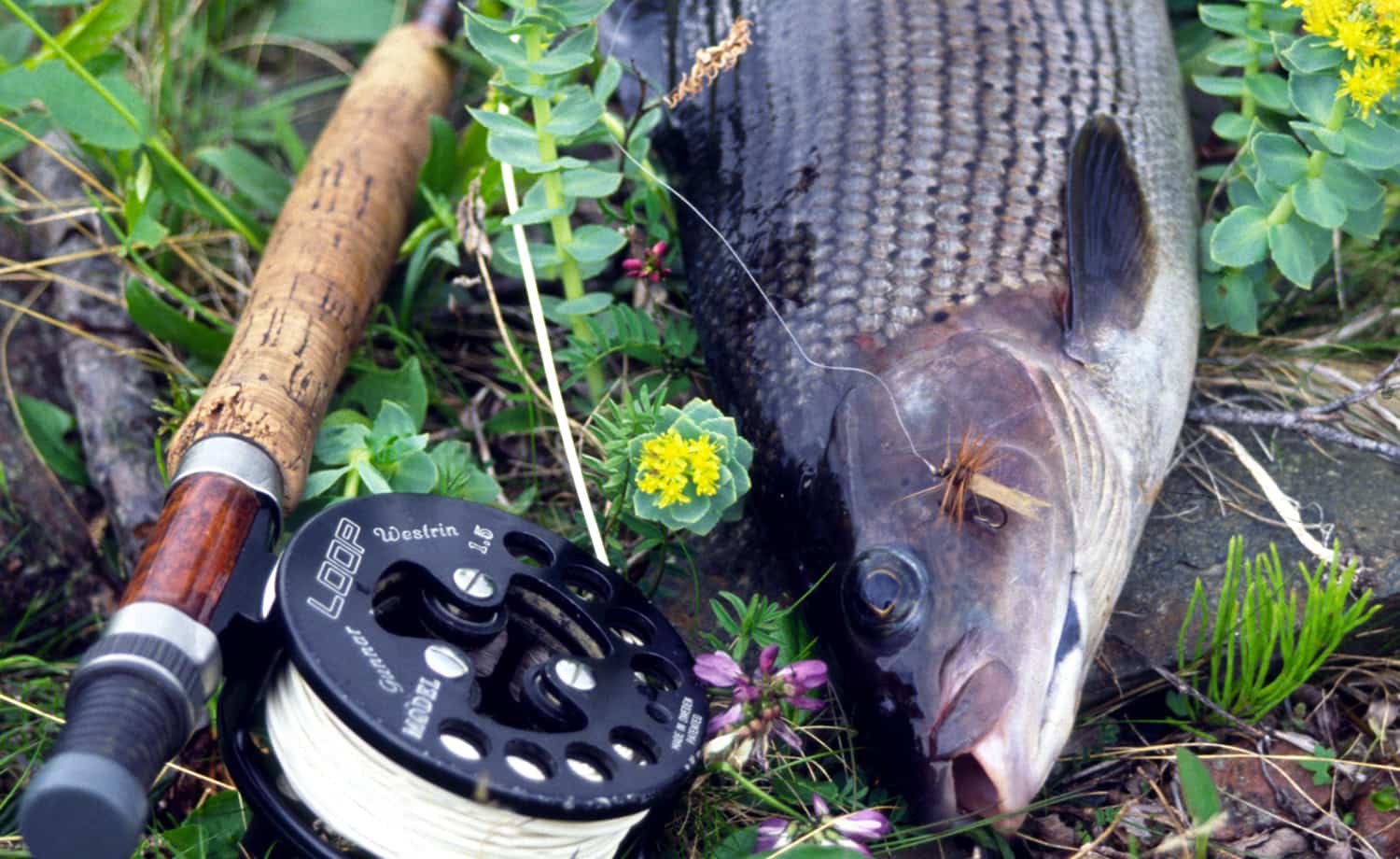 Grayling on a caddis.

It all began with Peter walking upstream to check out the beginning of the calm section of water. His idea was that the current might be stronger further upstream, making it a place grayling would prefer. We could also see one or two spontaneous rises from where the tent stood, fish that were probably swimming around looking for food, and difficult to catch. After a couple of hours, Peter came back really excited. Ten metres or so downstream the top of the pool he’d seen what looked like quite a large grayling rise. Since the water level was relatively normal, the wading worked. He caught a beautiful sandy-ridge grayling straight away from a distance of fifteen metres, with a perfect cast. The splendid catch was followed by more fish, all of them about a kilo or more.

Because we’d been talking about the deep parts of the stream that I’d got to know through the years, and how they played a role during the grayling run, he decided to explore the area. There was quite a big area that was deeper than the rest. How that hollow could have formed in a sandy riverbed was quite a mystery; it was bewildering. A big boulder can often cause that kind of hole to form as the current creates a crater around it. But the hole can’t last forever. The day will come when the hollowed-out area around the boulder becomes large enough to swallow the boulder. If conditions are favourable, a new hollow will be created, but it takes a long time. This is how large boulders can move across sandy riverbeds. 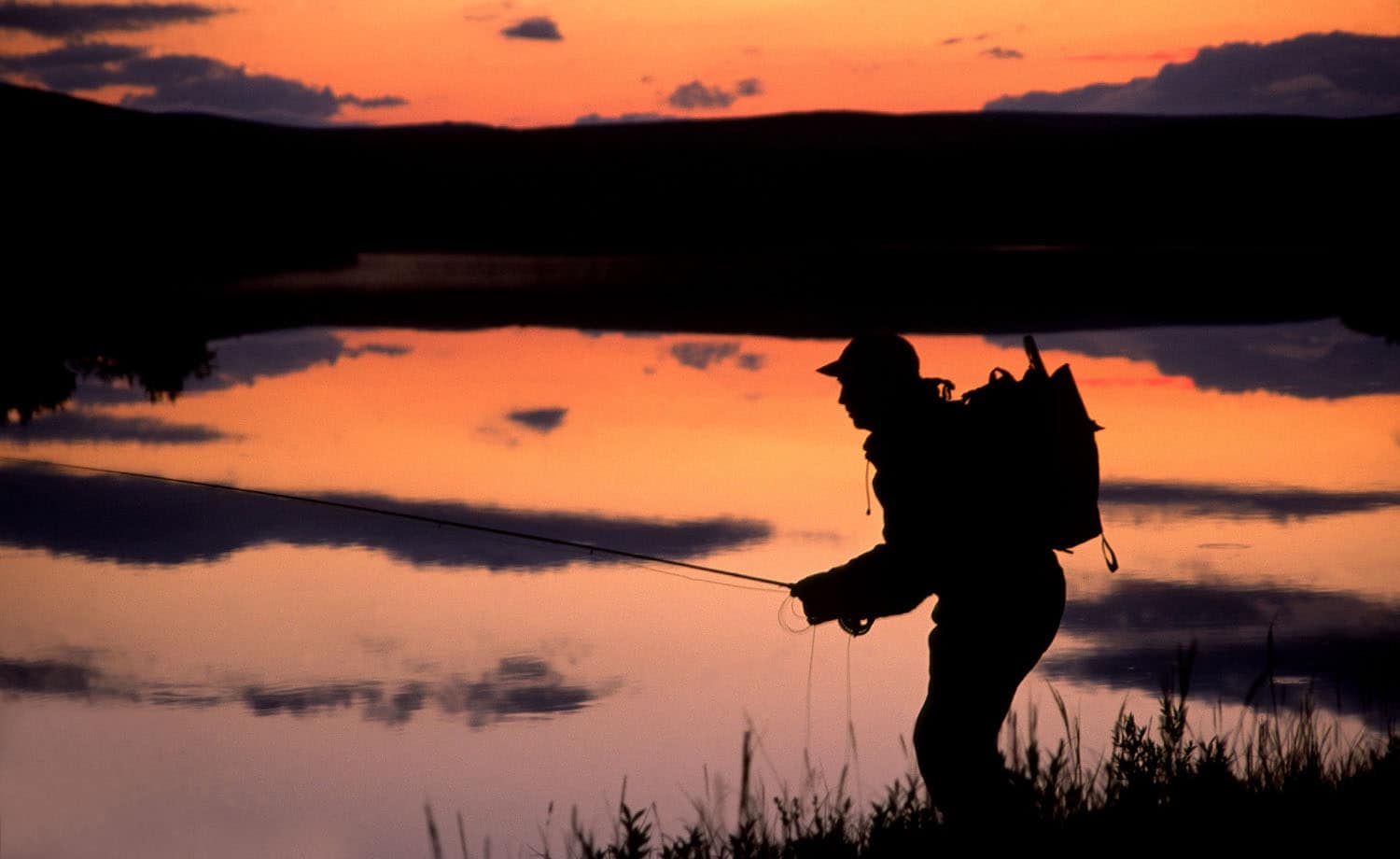 As dark as it gets at midnight.

Peter and I went there again a few years later. The weather was quite temperate with a mild wind sweeping through the valley and unusually intense mosquitoes. The graylings were rising. Wise from last time we chose to put the tent a lot nearer Peter’s spot. After the tent was up, we made a little fire and some coffee, the traditional welcome routine. Straight away, we started talking about previous visits to Vinjak and the sulky reindeer that seemed to live in the area. And all of a sudden, a reindeer did come charging across the heath, annoyed by the advances of mosquitoes and gnats. My friend is an avid hunter, and he shaped his hands to blow the call of a rutting elk. And the reindeer got absolutely mad, forcing us to hide behind the tent.

And the reindeer got absolutely mad, forcing us to hide behind the tent.

I’d met a properly crazy reindeer a couple of years earlier, back where we set camp that first time. It was a rather small animal but for some reason absolutely furious with me. The attack was so unexpected I almost didn’t have time to jump out of the way, into a small shrub. I danced back and forth for a while, in and out of the shrub, and tried to throw pebbles at my attacker. 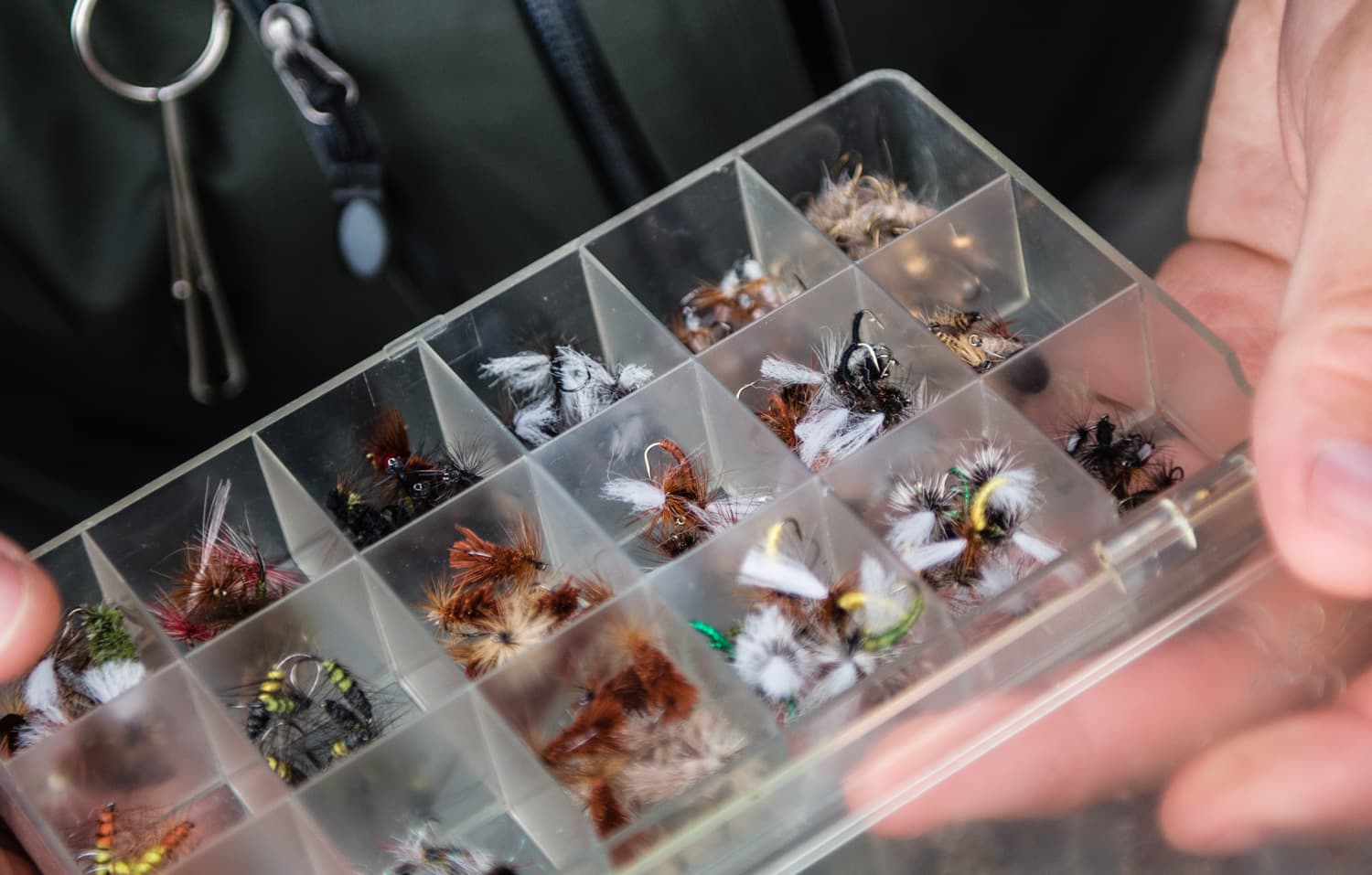 My friend Peter certainly has the right attitude when it comes to fishing. After the coffee and sandwich, he rolled out his camping mat and sleeping bag on the heath, found himself a book, and quickly positioned himself on his back. There was absolutely no hurry to go fishing, the time for that would come. And when the quiet evening had invaded the landscape, the wind had died down, and the reindeer disappeared, he closed his book with a thud and quickly got up. This was it. This was when the graylings would get a hard time out in the current.

We sat down by the edge of an ancient mount on a bog where the cloudberries were slowly ripening to check the rise’s intensity. The opposite bank was reflected in the water, turning the trees into a riparian palette of blue, green and brown. In the middle of the stream, we saw a real lump of a fish rise, so big that the entire mirrored
world shattered. Way over a kilo, we thought. 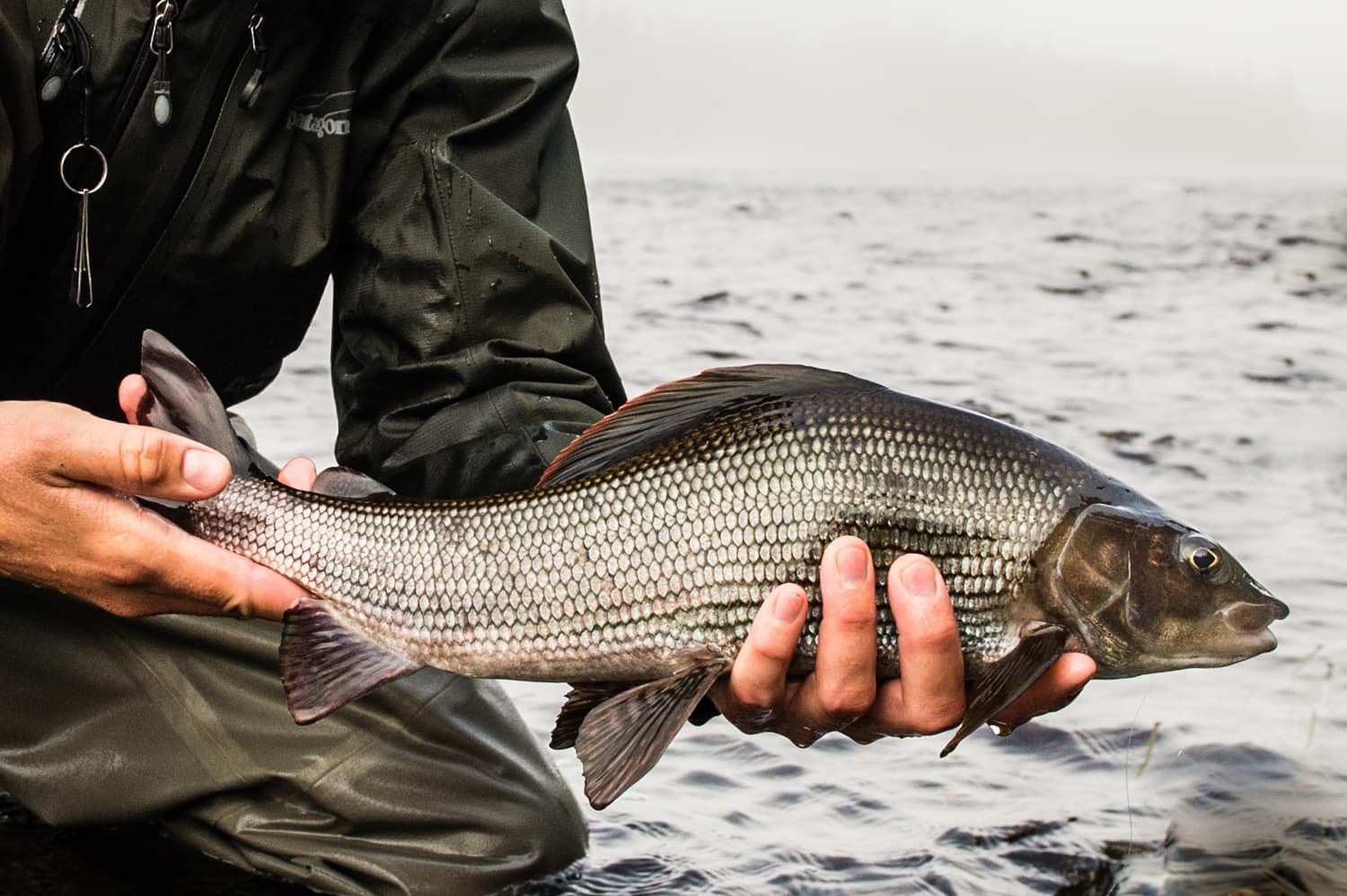 Sometimes referred to as the poor man's sail fish.

Waking up in the morning, the rain was still in the air. It pattered on the canvas and made us decide to make coffee in the apsis. Those moments are worth their weight in gold. There’s calm there, the feeling of just having woken up, and the smell of coffee. It also helps that your experience is shared by a good friend, someone you know inside out. Everything is easier to deal with then. But we suddenly realised we’d been tricked, and properly at that. The illusion was revealed when a stray ray of light shone through. It wasn’t raining. It was mosquitoes and gnats wanting to come inside and have a party. They bounced so hard against the canvas that the sound was that of summer rain.

The morning sun was already high in the sky when we looked out. The perpetually grumpy reindeer was idling around the heath and down by the edge of the stream a persistently cheeping Golden Plover was on patrol. If there’s one bird that can give a mountain wanderer the right, slightly melancholic, feeling that’s the one. As barren as the landscape, the sound is as irresistibly beautiful as a windswept sandy ridge against the light. Peters hole seemed unusually quiet in the morning. Despite the lack of life, we felt confident.

We knew the grayling were there. Now it was my turn to try the fishing around and inside the grayling hollow. Peter was really keen. He reminded me about the large grayling he’d caught at that spot ten years or so ago, a beautiful fish measuring a full 57 centimetres and with a colossal dorsal fin. There was something special in the air this day. An inexplicable excitement had engraved itself, something tangible, yet impossible to explain. Suddenly my friend told me that he thought he’d seen a glimpse of a monstrous grayling. If there are those weighing 1.7 kilos out there, there ought to be even larger ones too. He mumbled before I slowly waded out. 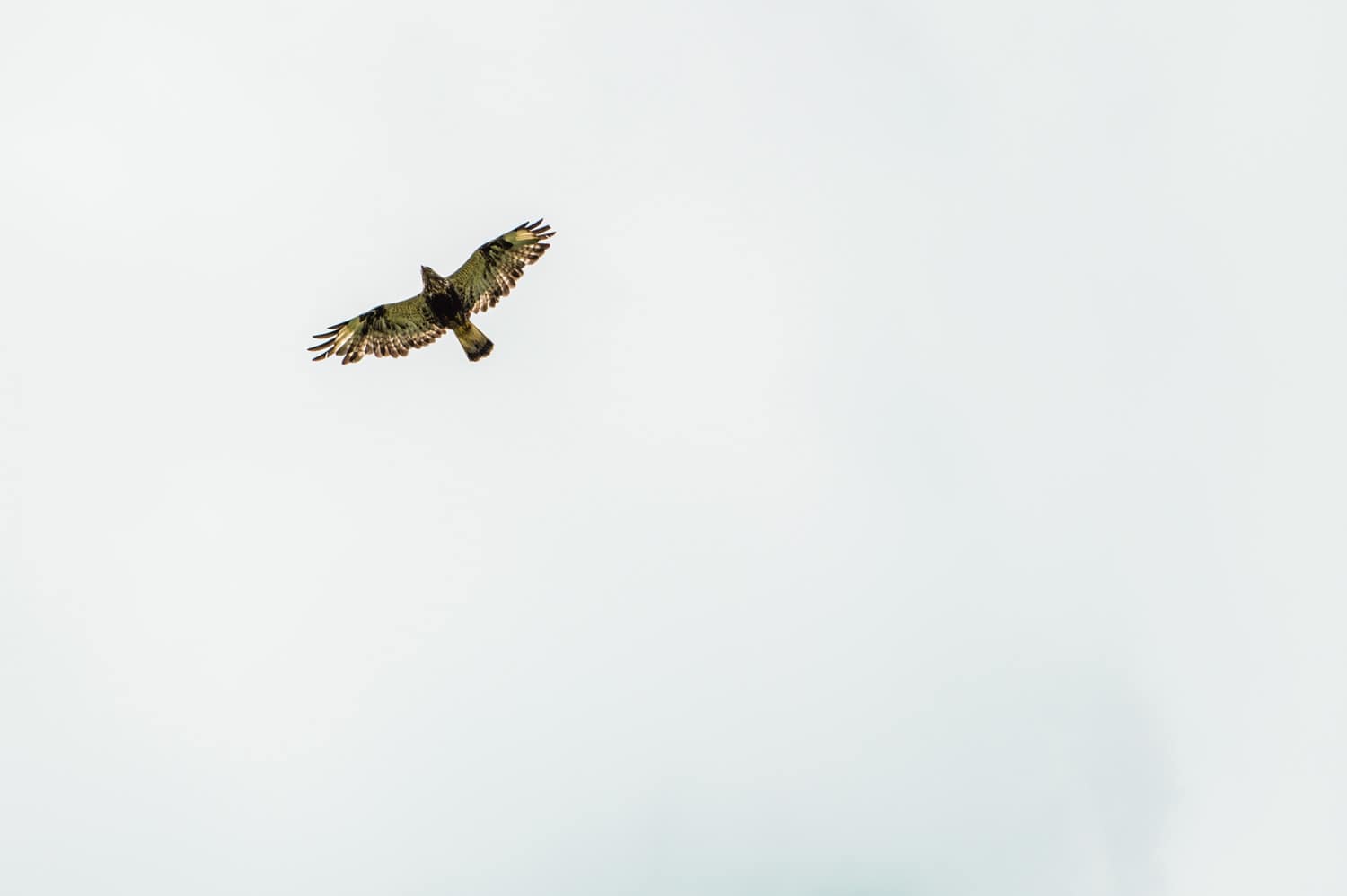 The biggest one in the creek

Even if nothing was rising, the fish showed their interest. Peter sat on his heels on a little hill with shrubs and willows between himself and the stream. A swift merlin escaped through the trees, followed by an enraged outfield of bluethroats. I have no idea how to define time. But it goes by. The graylings became more and more entertained by my flies as the day ripened and I kept fishing. Peter sat on his hill for a long time, all quiet, but finally, he started fishing. He’d probably spotted something. Then a tangible vacuum swept in, all over the mountains. All of a sudden, I found it hard to breathe. Was there someone who wanted to cry? I could feel the sorrow.

When we walked back towards our old spot a bit later, Peter seemed dejected, more than I thought he had cause for. Something had obviously happened over there in the scrubland. Slowly he told me about the gigantic grayling that bit on his first cast and jumped high in the air before landing on its side with a loud splash. He saw how the fly came loose before the fish landed in the water and how forcefully the fly line came bouncing back. The largest creature in the stream had shown its face, said thanks for the invite, but then spat the iron out before it was too late. The evening arrived, the waders came off, and the fishing rods were placed against a mountain birch. Coffee and sandwiches were dinner enough.
My friend wriggled his way into his sleeping bag and reached for his book. He suddenly smiled and
looked at me:
–It weighed two kilos. At least.