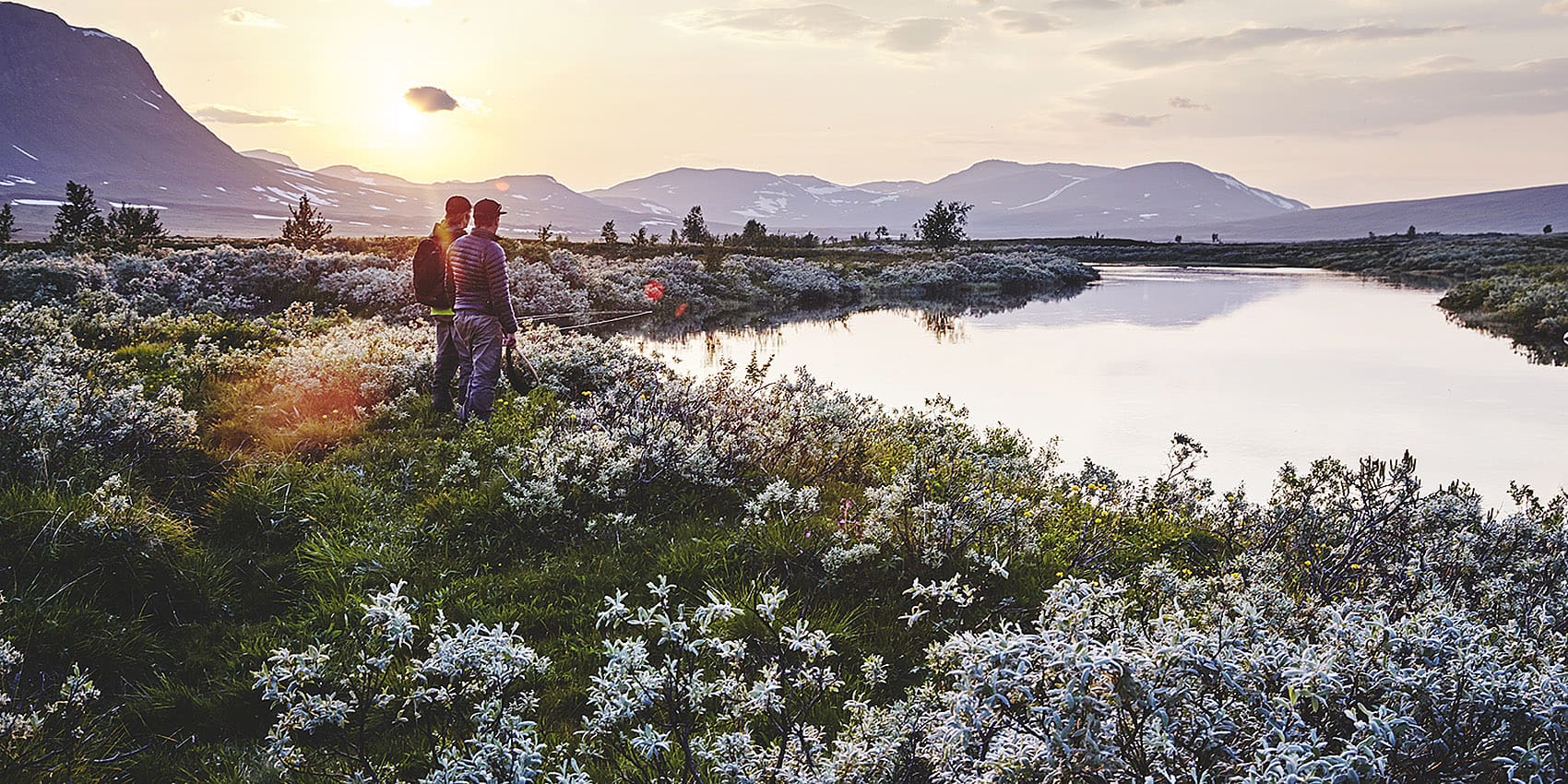 – Five thousand characters? About trout? How’s that going to work?
– Ok… I thought that someone with nothing but fly fishing on his mind would be able to do it. What about four thousand, then?
– No, no, NO! I meant how do I describe my relationship with trout when so little space is available!

When I was given the assignment you’ve just started reading, writing an article about trout, I was misunderstood from the beginning. Not surprisingly. It happens a lot. Mostly when speaking to people who don’t share my burning interest in fly fishing. After some negotiation, my editor and I agreed that Trout deserved a bit more space. So I started wondering – what is it about this little (unfortunately, often the case) creature that gives me butterflies? 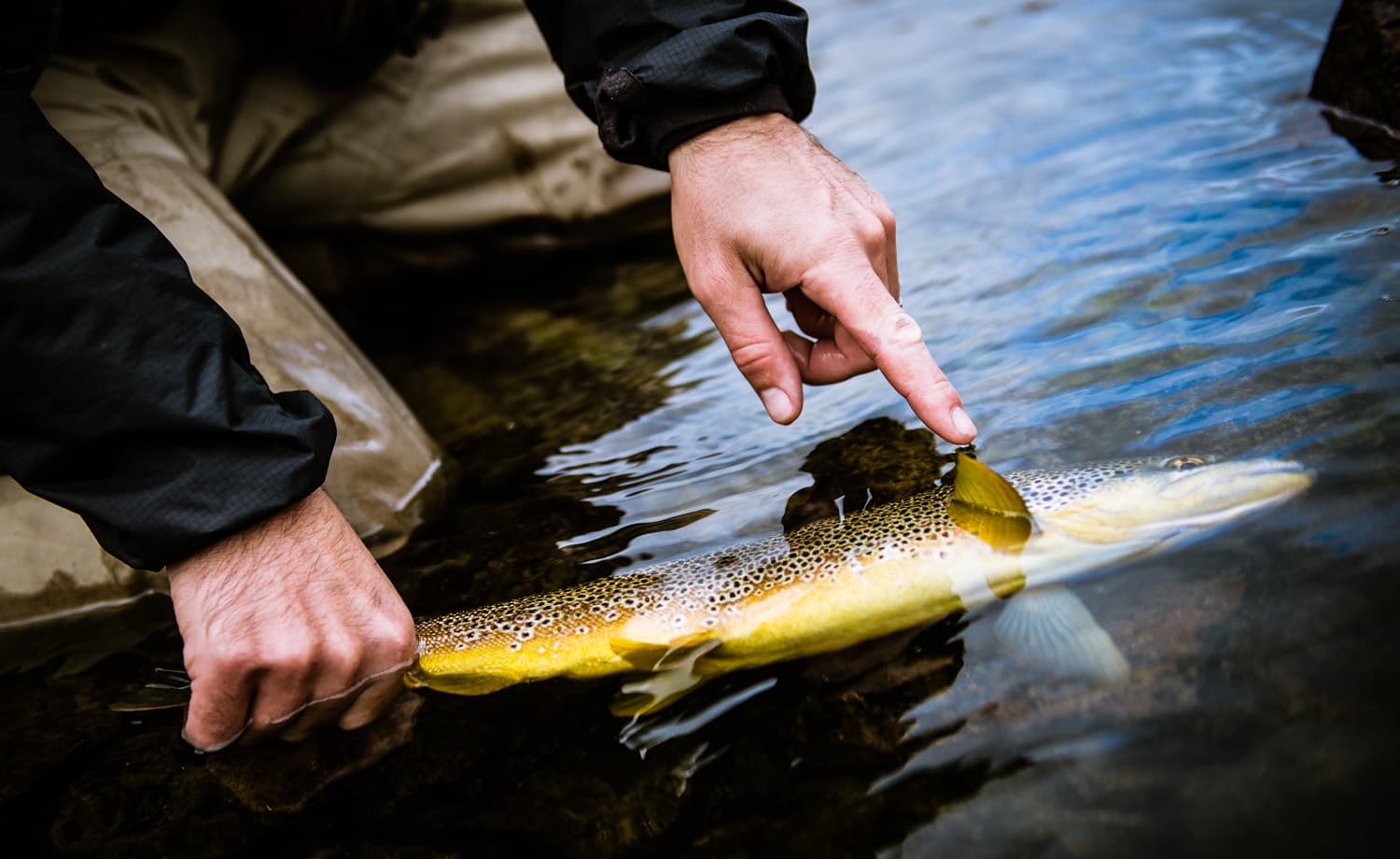 – Yes! No… YEEES!!! This is a short and quite loud monologue uttered by the genius and good life connoisseur Rolf Nylinder from behind his camera. I’ve just managed to get a pretty decent trout on the hook. First, it was interested, then uninterested and then interested enough to rise and pick my Klinkhammer, size 16. Rolf caught it on film.  When the yellow-bellied beauty is swimming freely once again, after a couple of runs far into the backing, and just let’s go I understand it all, clearer than ever before: I love you!
Rolf sighs: “But no, not again”. To be a wildlife filmmaker has its limits. Distance doesn’t always make love grow fonder.

Everything you need to know about fly fishing in Swedish Lapland

The most interesting thing about my feelings for trout is how they adapt to different situations. Just as with the expression “hunger is the best spice”, the yearning can grow to abnormal proportions after a couple of days without fish. The latest example was towards the end of last summer when a group flyfisherman in a very dampened mood was on its way back to Nikkaluokta after a week in the wilderness. The storms had been bad enough to ruin our tents and our motto “Dry or Die” – if we caught a fish it had to be rising and on a dry fly – was held by the thinnest of lines. But by the last body of water we encountered before heading home we finally found a lakeside sheltered from the wind. For the first time in a week, we saw fish that rose more than once and it felt possible to use dry flies. 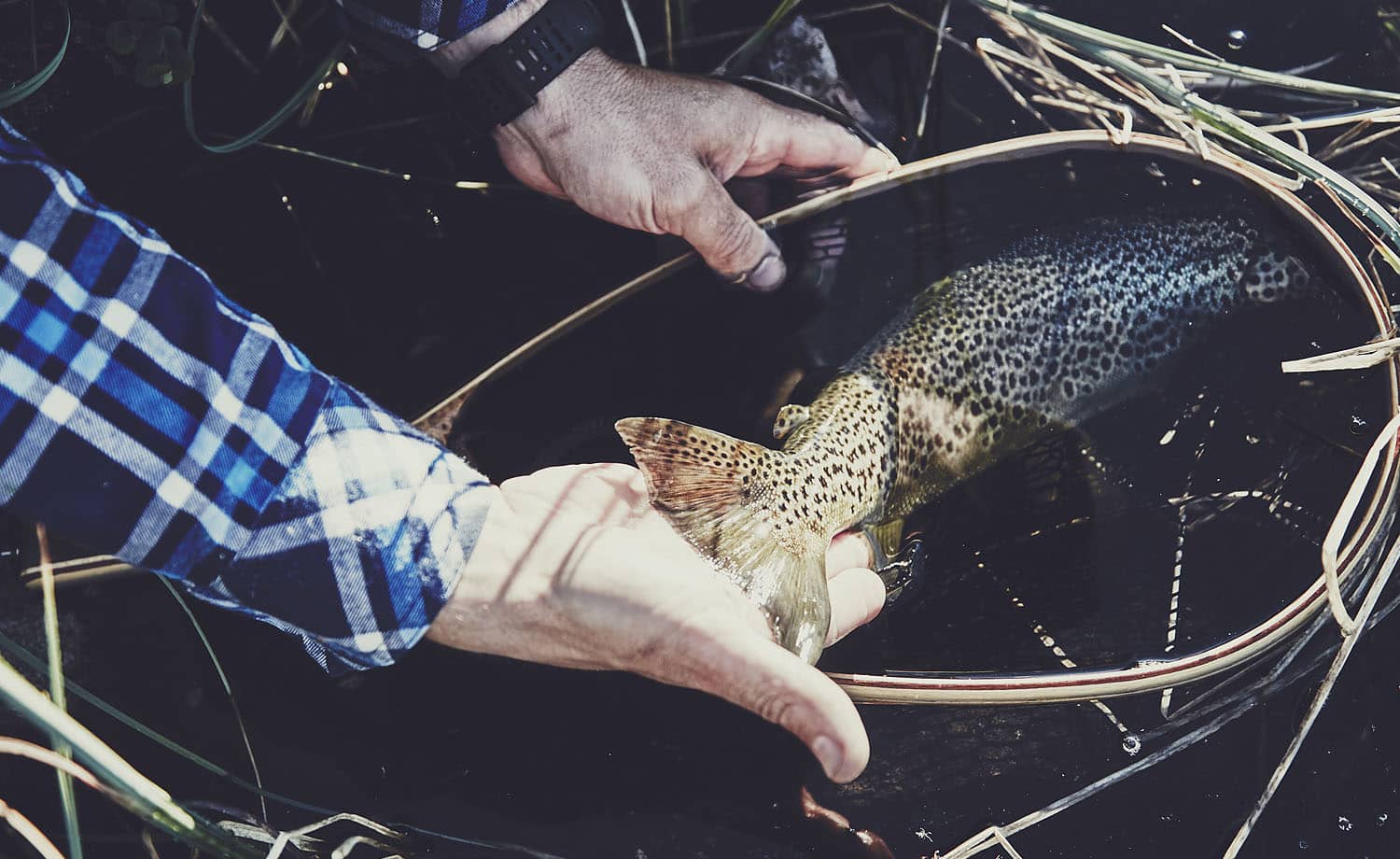 Sometimes you just fet a good sized trout that you love to catch and than release...

This very area that we’d spent the week in I’d been dreaming about for a long time. But the dreams never featured shredded tents and waves more suited for surfing than fly fishing. When there were literally only minutes left of our trip, the anguish had reached unhealthy proportions. A bitterness that was hard to conceal had poisoned the wonderful experience we’d been awarded by nature during the last couple of days. And then it happened: the wind died down, the water in the inlet lay flat and in a moment of hollow-eyed staring my fly disappeared from the surface, followed by a self-assured wave from a tail fin of the larger variety. Between raising my rod and realising that the fish was hooked my anxiety rose tenfold. After some heavy pulls through the rod straight into my heart it was transformed into euphoria bordering on insanity. 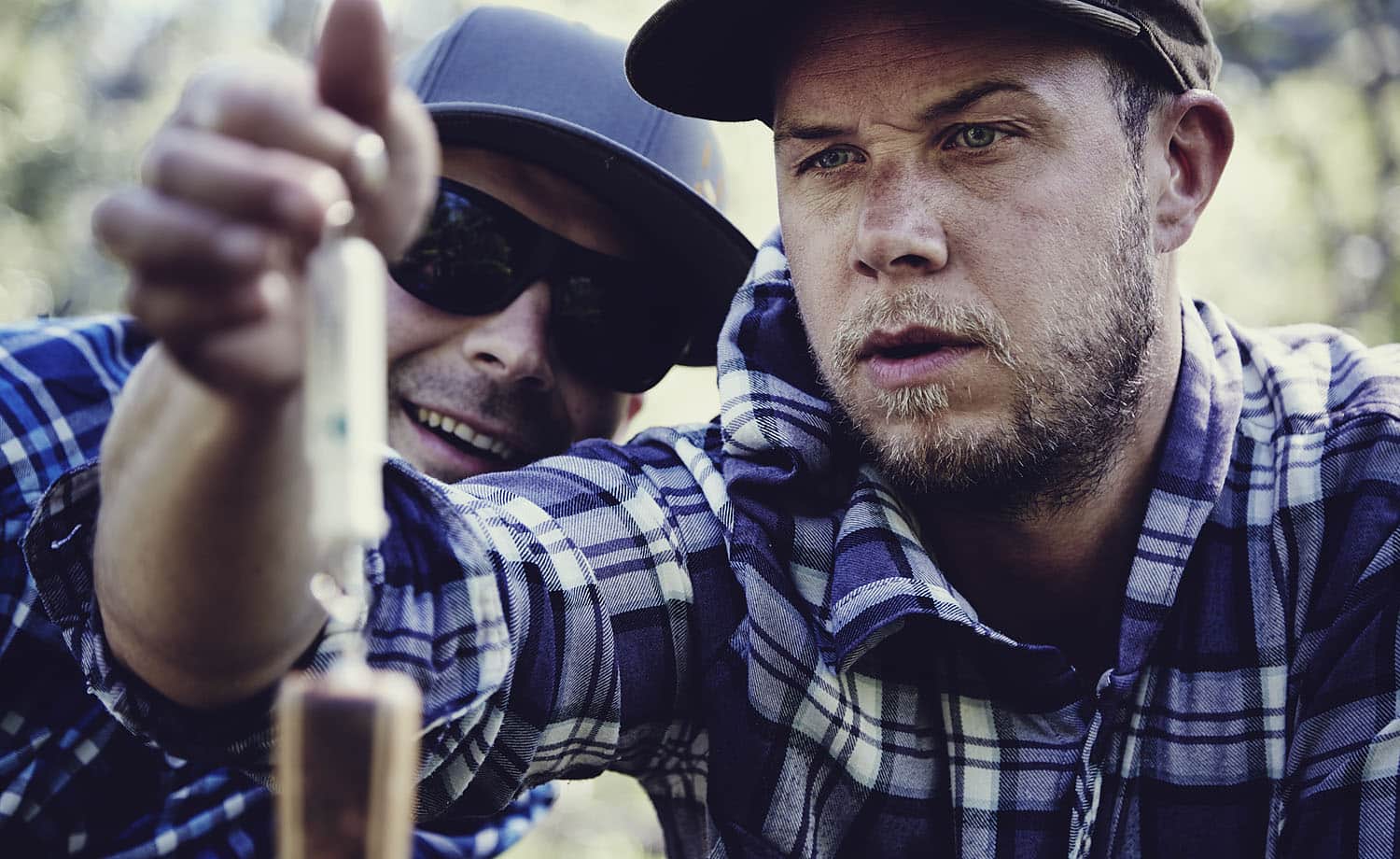 ... sometimes you get a record.

So what’s the root of this love? And how did it get so strong? Almost crazy! The first seed was planted by my father, Kjell, nature lover and a lifelong fishing fiend. Sometime in the early 90s, he told me it was a finer thing to catch a trout than a grayling. I suppose to him and the other fishermen in Malung the reason was, that there’s a lot of grayling in the Västerdal River, but hardly any trout. Following dad’s simple model it dawned on me that trout were more difficult to outwit than grayling. And even if the fishing sessions with my seed-planting father have become fewer and farther between, my feelings for trout have intensified.

The feelings became even stronger when after many years of fishing I had some kind of dry-fly revival, with help from the previously mentioned Rolf and the other members of the fly-fishing collective Frontside Fly. The trips went further and further north, resulting in paths less travelled, grander nature and clearer water. Mountain fishing was no longer a fun week with friends; it was allowed to take up more and more space in my life.  Using tricks that were more or less above board I managed to steer my partner’s holiday away from week number 28 and a bit of week 29 and perhaps a bit longer than that. One more week. Two. Perhaps some late-summer fishing? And… well, you understand… Deep down I know she does too. 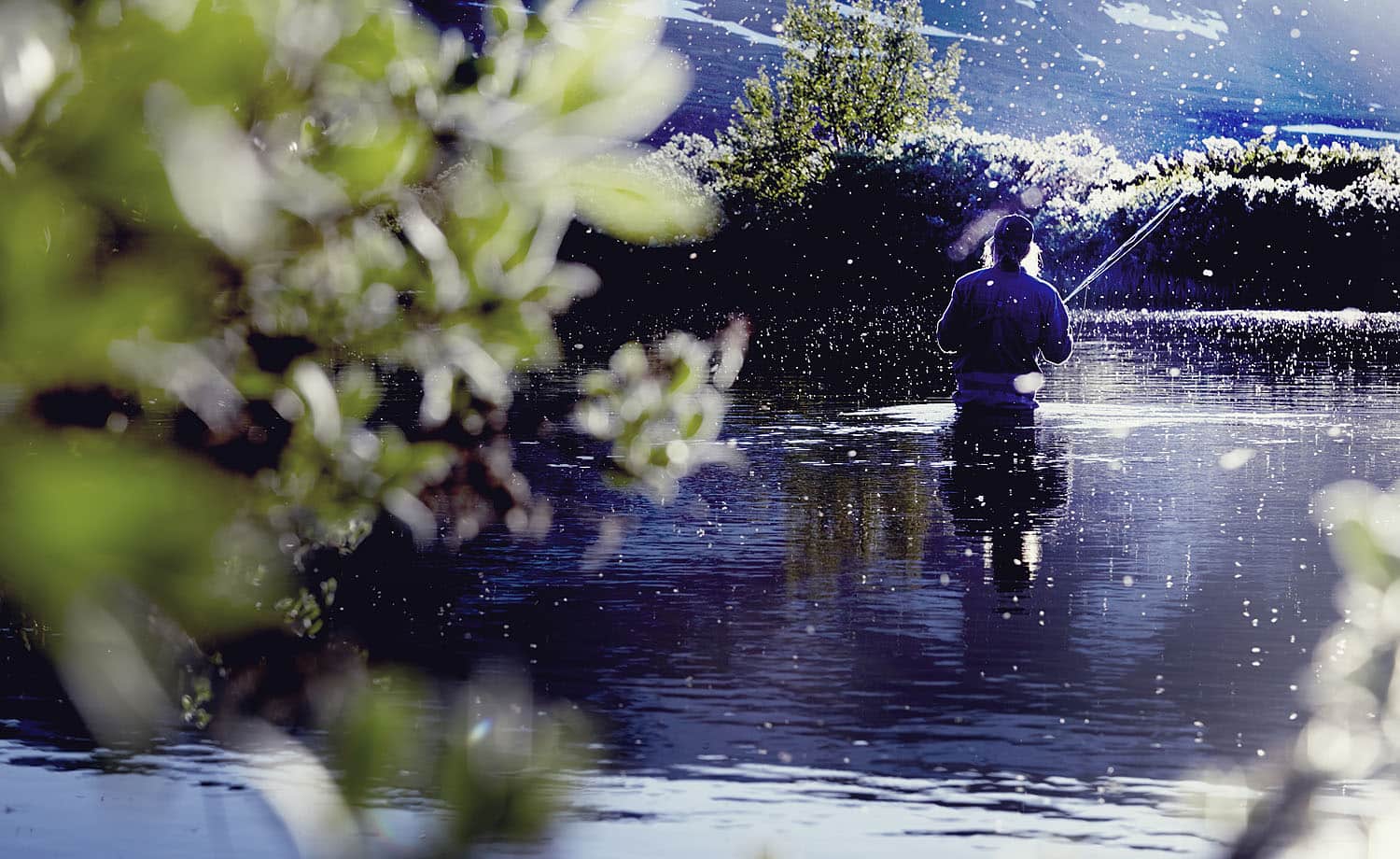 The writer in the midst of a massive hatch of sandflies and mayflies.

A couple of years ago I broke my personal dry-fly record with a somewhat stout, 60-centimetre trout. I sometimes measure my experiences against it. But sometimes not. What’s become clear is that my love isn’t in the least superficial and based on what other fishermen would call a ‘dream catch’ – my love is real, separated from the values imposed by the rest of the world. Yes, I understand that this sounds a bit woolly, but let me be more precise: just like the unconditional and life-long love many couples experience, where looks aren’t all that matters and love rests on other foundations than ostentation and vanity, my love for the trout rests wholly on the relationship that is shaped before, during, and after it’s hooked. The truth of this fondness is also clearly proven by the fact that I have feelings for the trout that outwit me, too. Even if those feelings are more akin to those of unrequited love, they’re still there. Bittersweet memories.

As our trips became longer and the waters clearer, fishing became a soundless activity where the angle of the sun in relation to ‘dangerous curves’ during the best hatching season was studied and debated ad nauseam. And all we got from that ‘science’ was an activity that changed from an easy way of fishing to become an art form to improve on. A way of life. Parallel to this refinement we saw a change in the relationship with the fish we were trying to sneak up on. Trout went from being ‘fish’ to individuals, complete with names more often than not. ‘The Tuft Trout’ was a fish found near a tuft not far from my home in Dalarna. But since then I’ve used the name for many other tuft trout, snacking on land-living insects falling off tufts into the stream. ‘The Blind Trout’ went for my friend Ågren’s flies five times in a row before the good life connoisseur Patrik Daugaard hooked it on his first cast. 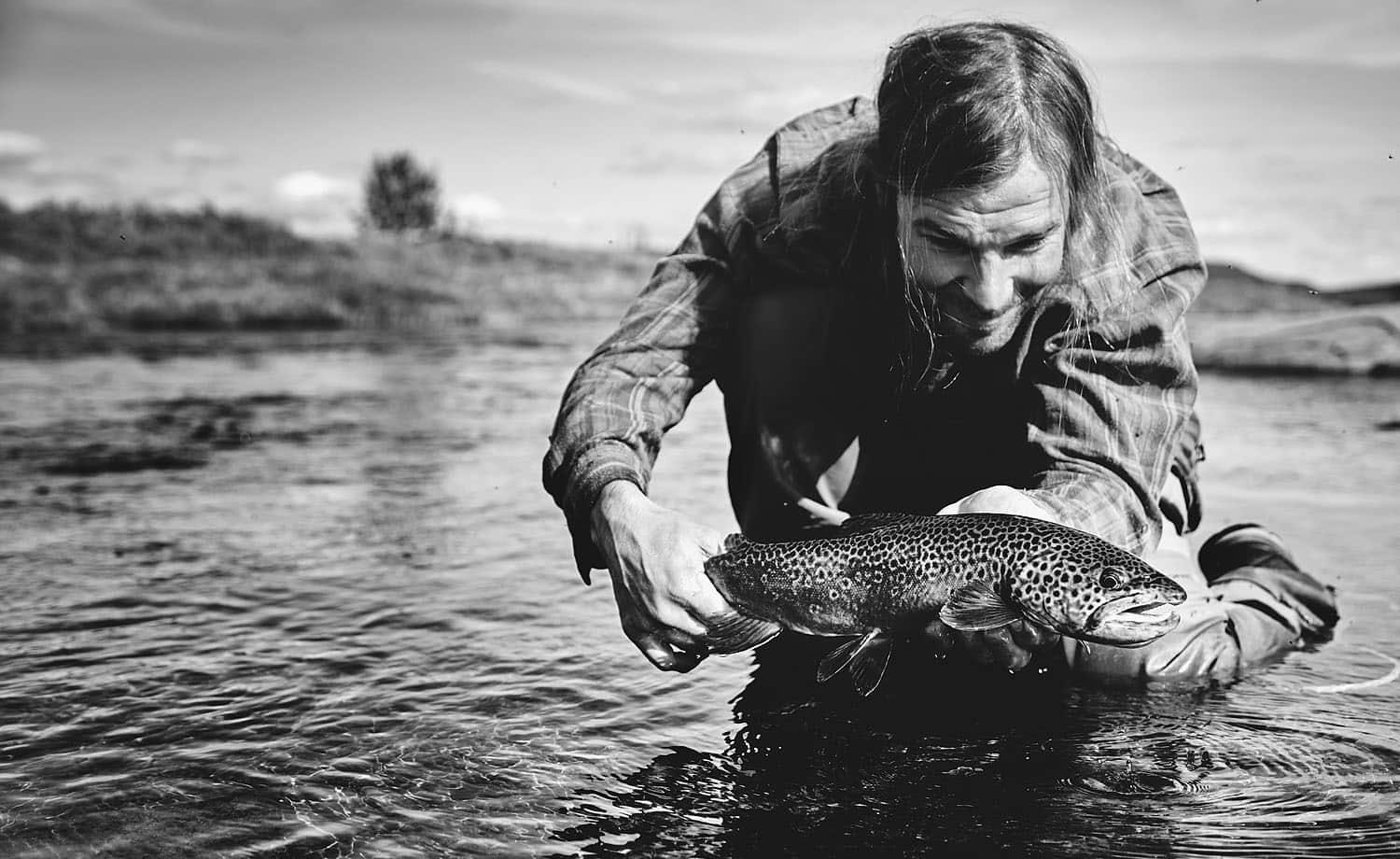 is one of Sweden’s great free-skiers and a Haglöfs Ambassador. In the summer he’d rather go fishing.

The one that got away

And in the year of grace 2016, there’s nothing strange about a man showing his emotions. So I’m not the least ashamed of that little tear of joy once ‘The Overtime Trout’ was allowed to swim back home. The bitterness was gone, there was a shimmer around us, and the 30-kilo rucksack was thrown lightly onto my back for the return. We form strong relationships with our friends on the other side of the surface. They become our impatient longing and timid objects we pray to. The urge to always hook a fish becomes less strong as the years go by. Just seeing a trout that’s somehow different to the rest is often as important as getting it on the hook. Don’t get me wrong: we always do our best to catch them, but a successful day by the water doesn’t necessarily mean that I’ve caught a big fish. It could also mean that I’ve seen that one fish I’ve never seen before. The one I’d like to catch. The one that somehow brings me closer to becoming the person I would like to be. The young lover.