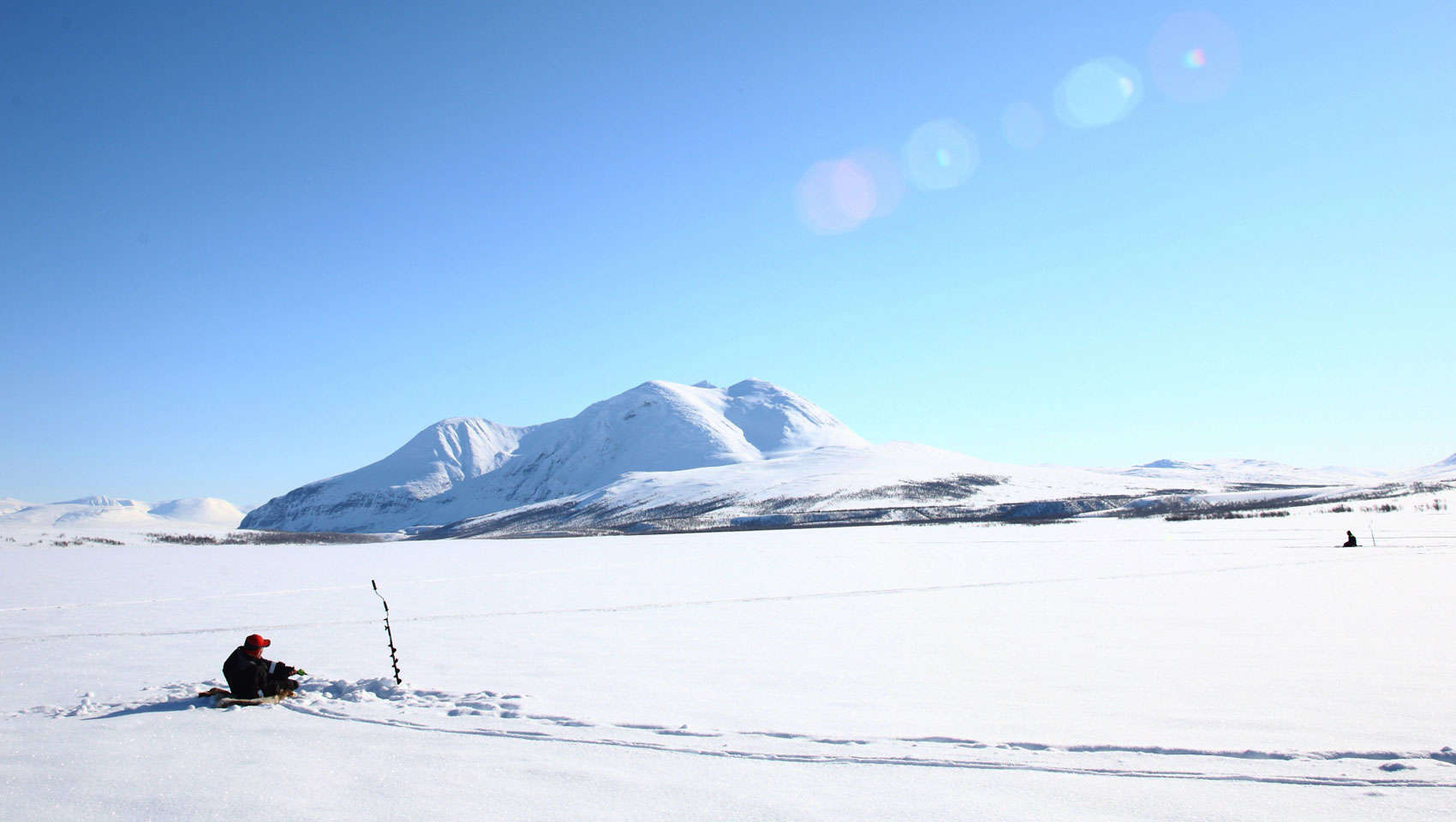 Equipped with a reindeer skin and an ice drill, an ice fishing rod and maggots, our friend Håkan Stenlund welcome spring on the ice around Saltoluokta. Winter fishing has never been more enjoyable.

On lake Akkajaure on the outskirts of mighty World Heritage Laponia, I’m looking down a black hole in the ice thinking: ”It’s a little bit stupid after all”. Because no matter how hard I try to think about these things, ice fishing isn’t really an activity that requires you to be able to split atoms during an average working day. It’s more the other way round – it’s nearly a prerequisite not to be doing that if you want to experience an enjoyable time on the ice. In other words: I’ve really started to like this kind of fishing. 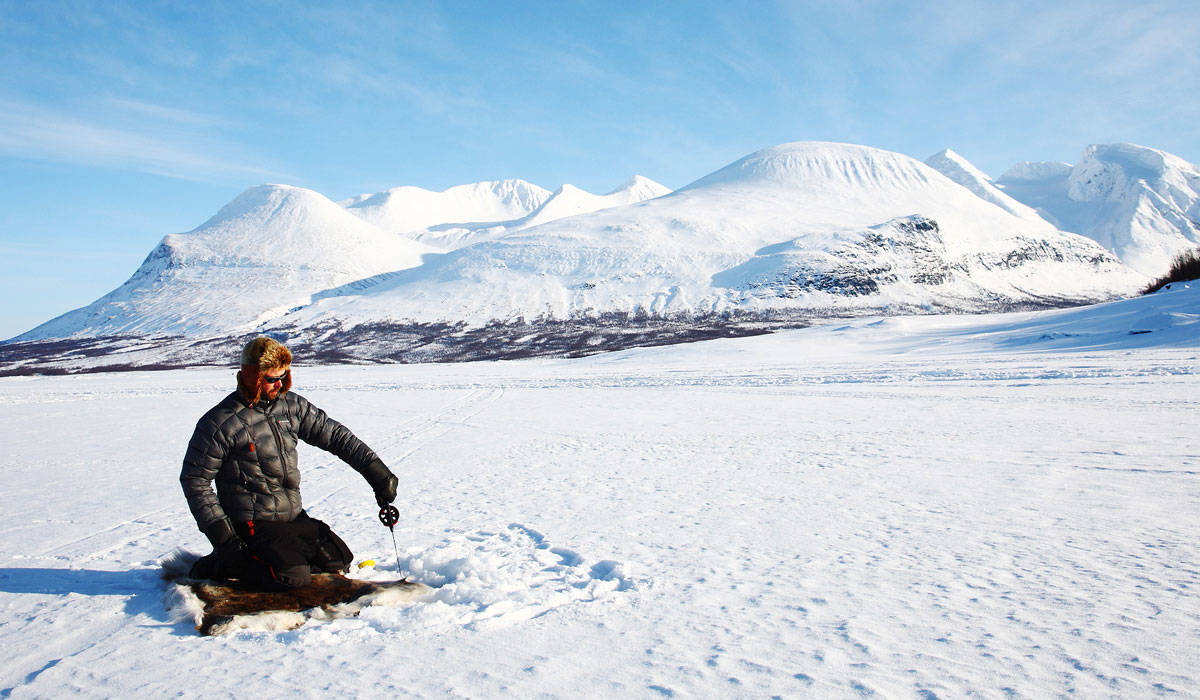 I look up, and the view I have in front of me is impossible to describe. As my lure bobs up and down a couple of metres underwater, I spend my energy taking in and enjoying the mightiest view in Sweden. The Áhkká mountain – Queen of Sápmi – towers up ahead like an enormous ice-cream dessert in blueberry-blue surroundings. No mountain in Sweden is as mighty as Áhkká. From the ice on the lake to the glacier on top of the mountain there is a difference in the height of approximately 1,550 metres, depending on what level the Swedish energy company Vattenfall has decided on for the lake today. A vertical rise of 1,550 metres is more or less two Åreskutan mountains on top of each other. It’s so high that you can’t really understand it.

A story about Kebnekaise in her spring colours

As the sun disappears behind the western mountain ridge, it gets cold quickly. Johan Påve, the STF director in Saltoluokta, says it’s about time to head for Akkastugan to get the sauna fired up and prepare dinner. Most of us in the group like the idea. But to work up an appetite, I decide to walk from the ice to the cottage. When the others leave by snowmobile, I’m on the ice all by myself. I’ve never seen Áhkká this pretty in its winter costume, ever.

All fishers want to feel their hearts beat faster. That fear of losing the fish that suddenly becomes a challenge. Hemingway writes in his Nobel Prize-winning novel The Old Man and the Sea: “You are killing me, fish… But you have a right to.” To Santiago and the author himself, there was more than a fish to conquer. There was a life that needed surviving. 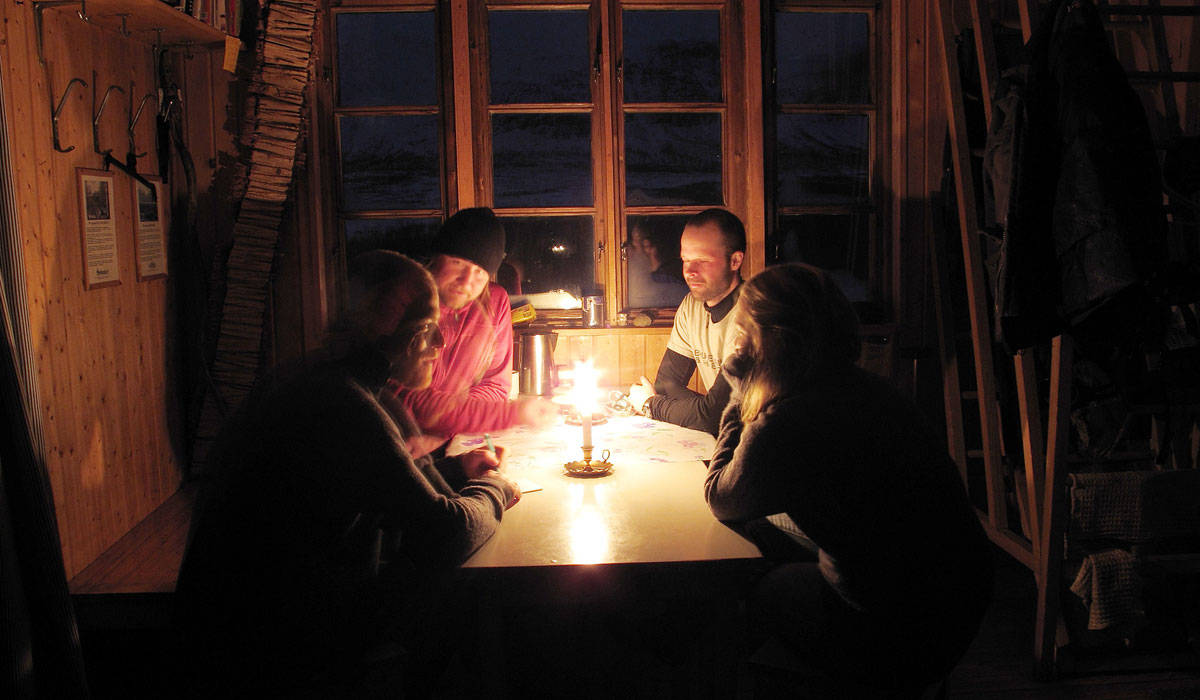 Saltoluokta Mountain Station, a place to sign out and wind down.

The Greta Garbo of fish

Ice fishing, by nature, can’t be said to be very complicated. Find ice, drill a hole, lower some bait, catch a fish. Well, at least it’s simple up until that last bit. Some call arctic char the Greta Garbo of fish. Partly because of its beauty – few fishes can offer a more stunning colour. But also because of its nature, because few fishes are more elusive than the arctic char. I’ve often used that simile myself. And sometimes you just can’t fail when you’re fishing for arctic char. But more often you can’t seem to succeed at all. So lately I’ve more or less decided that arctic char is more of a Dr Jekyll and Mr Hyde character. And more often than not it’s the mean Hyde, rather than the good-natured doctor.

For most of us, ice fishing is something that happens in spring. Under a warming sun, up in the mountains and on a reindeer skin, we enjoy ourselves as the sun heats our faces as well as our souls. To be outside in the sun is more important than fishing as such. Often we are pulled from our dreams by the pulling sensation on the line. One way of making ice fishing more exciting is what we call peeking. Drill a hole where it’s no deeper than a couple of metres. Clear all the ice and slush from the hole and lie down so you can look down into the water. The eyes will soon get used to it, and you start tracing the bottom of the lake. After a while, you might see some shadows moving. It’s exciting when large, arctic chars begin swimming past. Peeking is kind of ice fishing version 2.0.

But true fanatics know, of course, that it’s the first ice that’s the big thing and not spring. That’s when your chances of catching fish are greatest. To venture out on that first, black ice is always life at the edge. It’s like standing on a cliff with your toes already over the edge. You have to enjoy that dizzying feeling, even if four centimetres of ice can hold nearly 80 kilos. 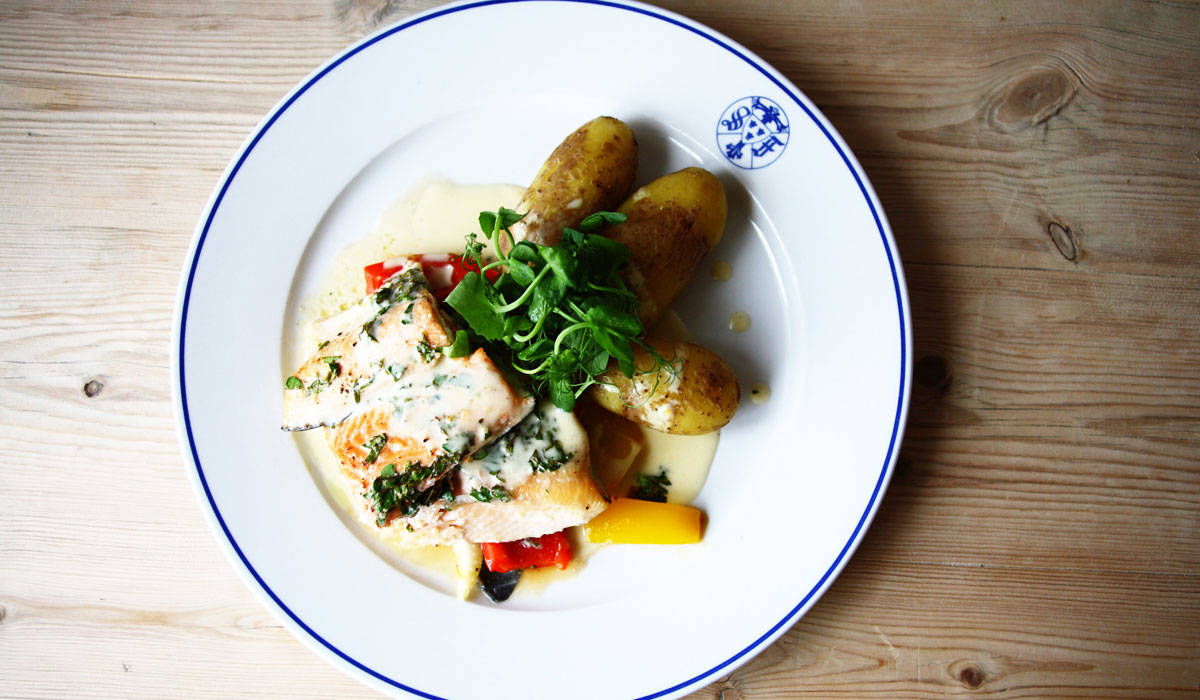 For dinner: a Gremolata-baked arctic char served with a white-wine sauce, almond potatoes and vegetables sautéed in butter.

Next to the World Heritage site Laponia and the vast national parks Sarek and Stora Sjöfallet/Stuor Muorkke, a place with no roads, you’ll find Saltoluokta STF Mountain Station. To learn more, visit svenskaturistforeningen.se.

Suddenly it happens as the Swedish lottery adage has it. But this time it’s on lake Kutjaure and has nothing to do with the lottery. You’re lucky, and you win. “Yes!” shouts Jan-Åke Larsson and then starts pulling frantically on the line. Up comes a beautiful arctic char weighing in at more than half a kilo. One of those chars you want in your frying pan with extra salty butter. Regarding food, the arctic char is very rewarding. It’s a fish that works even when you’re not a culinary genius. Good chefs like to stay that amateur chefs ‘kill’ their fish twice: once when we pull them out of the water and then again when we put them in the frying pan. The arctic char is a ‘fatty’ fish – and now we’re talking the good kind, the omega-3s – which means that you don’t always have to have a thermometer on the standby when you deal with your newly caught arctic char on the cooker. It can be fried a bit longer without becoming too dry.

Then I get an arctic char that weighs a bit over a kilo. If this had been a true fishing story, I’d have written more about the event itself, of course. About the bite: how it started by just nibbling the maggot before it made its mind up. About the line pull: how the fish sped off just after it got caught on the hook (I’m glad the rod didn’t disappear into the deep). The fear is how it feels when the large and fierce fellow must be led up through the narrow hole in the ice, how it hits the edge of the drilled hole, how it becomes a kind of plug down there. How it feels when the only thing running through your mind is: “No! I’m going to lose it!”

But this isn’t a true fishing story. Instead, I’m just going to describe how I took it back with me to Saltoluokta where the chef prepared a Gremolata-baked arctic char served with a white-wine sauce, almond potatoes and vegetables sautéed in butter. What more could a winter fisher want?